you seen this TMNT game they're doing now?

Staff member
Moderator
Hey, this game is pretty good! Easily the definitive TMNT brawler. I played through on the easy difficulty with my kids, who loved it. Half of them tired out midway through, and so did I, to be honest -- at 16 stages, the game is on the long side for a single sitting -- but since one wanted to keep playing, we powered through. Now, my 5yo daughter -- the youngest of the crew -- is playing solo.

What's the difference between Story and Arcade? We did Story.

Arcade removes the map and has limited continues if I recall correctly...altho I haven't played it yet, so I may be a little off.

Pence and I played through this in one sitting, and it was good!

Not Streets of Rage 4 good, mind you, but good nonetheless.

ArugulaZ said:
Which one is TMNT3? Was that the Manhattan Project on the NES? I would have liked that one better if it wasn't so hamstrung by the hardware. Probably would have been a better candidate for release on the Sega Genesis, honestly.
Click to expand...

Yeah, the Manhatten Project. The game was just HARD. Compared to Turtles in Time, it was brutal. I love it, my favorite Turtles game until, well, this, which is just that much better. It was near NES end of life, so it squeezed everything it could out of the old hardware and it was great for it. Only issue was the color pallet which I always felt was too muted. So much of this game reminds me of TMNT3 it just makes me giggle.

Staff member
Moderator
The plunger crossbow dudes - do you suppose that's a reference to how the guns from the arcade game looked like plungers?

Arcade mode has no map, you don't level up, and there's limited continues (credits). I was able to do it on one "quarter" in the easiest setting but I had people dropping in and dropping out throughout since I did an open party on PSN. I'm not sure how much harder it would be on a higher difficulty. I don't typically play beat-em-ups for a challenge so I'm loath to find out.

I just ran a 1 quarter run on medium with April who so far has been my favorite for sheer speed. Almost 2 hours for that. Ah my wrists hurt, so out of practice. Thinking I can probably handle hard now, but I need a break.


Wherein I nerd out about Turtle trivia throughout.


Mogri said:
The plunger crossbow dudes - do you suppose that's a reference to how the guns from the arcade game looked like plungers?
Click to expand...

While I wouldn't rule it out, I'm pretty sure the arcade guns were meant to be these:

I think those Foot Soldiers were more likely a reference to goofy weaponry like this from the line back in the day: 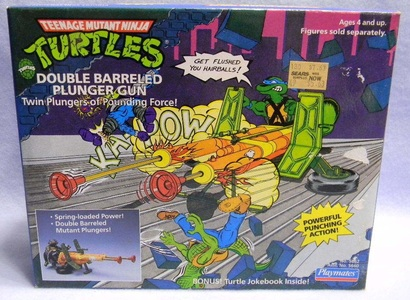 Staff member
Moderator
Can you quit arcade mode and come back later, or does exiting lose your progress?

I haven't done it but I think you lose progress on Arcade mode. I do wonder if there's a level select hiding somewhere. . .

Staff member
Moderator
I dared not try, so I resumed my attempt this morning and was one life short of the 1cc on normal difficulty with Mike.

We played through the first seven levels as a fambly last night (Father's Day request) and had a blast. The attention to detail is really fun, and all the idle activities the Foot bots are up to when you encounter them makes our daughter wonder why we have to be enemies at all.

Beat it last night with April and Splinter, still having the weird bug where sometimes continue shows up and sometimes it doesn't, but I think that's more due to my Xbox being old than the game. Fantastic game. The only cameo we didn't find on the first pass was one of the Neutrinos, but we had a guess where it would be since the car was on the map, and for some reason I always remember the scene from the cartoon where Mike got fuzzy dice for the car.

Were the Triceratons in the original cartoon, or are the ones in this game original characters.

Or at least original designs for existing characters.

Triceratons were in the original comic run. Like the old B&W one by Eastman and Laird.

So was "Krang" actually but it was a whole alien race of brains in android bodies and they weren't evil.

Yeah, but they didn’t show up in the 90s cartoon though right?

They appeared in one episode of the 80s show, and the designs in the game are based on their designs from the cartoon. They made an action figure of them as well. 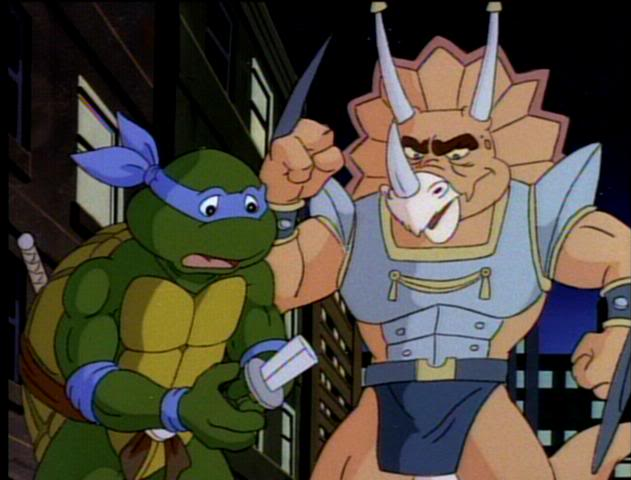 Man, the game goes all out for finding references

There's even a boss fight against a holographic Tokka and Rahzar.

Beat this a few times!
Splinter, Leonardo and Michaelangelo are MAXXED out.

It's really great. I'd have to give the edge overall to Streets of Rage 4, which generally is more "cool" or whatever. That said - the sprite work here is basically second to none. And fidelity to source and what it's trying to do. AND omg the mobility. Great stuff!

Sarcasmorator said:
There's even a boss fight against a holographic Tokka and Rahzar.
Click to expand...

Which is sorta weird, given that they were in the cartoon, too.

Turtles Forever sort of ignored that, too, by making their own.

I've been progressing slowly through story mode, it's been a busy weekend. At Stage 13. The game has kinda shown me when exactly I stopped watching the cartoon based on not recognizing certain bosses. (first one that really made me scratch my head was Tempestra though it's possible I simply missed that episode)

Did we ever get any confirmation on how the 'beat the game with all characters' achievement works? Can you just replay the final stage with a different character on the same save or do you have to replay Story mode? I expect you can't just easily do the final stage with a fresh character since they'll be starting at level 1, but assuming you could would that count?

Staff member
Moderator
You can, and the final stage isn't so hard that you won't be able to do it at level 1 with a full stock of lives, at least on easy/normal.

Staff member
Moderator
Oh, but if you skip the end sequence, you don't get credit for that achievement. You have to actually watch the ending for your character for it to count!

Actually, come to think of it, I'm not sure if it's this or what you're saying, but the last stage isn't especially long anyway.

No that's what I was looking for, thanks.

My first character, Mikey, is almost maxed out so I might as well start leveling another one anyway if I still have stages left.

SpoonyBard said:
I've been progressing slowly through story mode, it's been a busy weekend. At Stage 13. The game has kinda shown me when exactly I stopped watching the cartoon based on not recognizing certain bosses. (first one that really made me scratch my head was Tempestra though it's possible I simply missed that episode)
Click to expand...

She was from the 1990 season, when the show switched away from syndication. I thought it was wild that they included her — her episode was the second on the ‘Leonardo Lightens Up’ VHS, which I had as a kid and probably watched dozens of times. Unlike some of the other lesser known bosses, I don’t think she was based on a Playmates toy.

That's the one I didn't recognize too, and I was curious if she was a creation for the game.

There's a few characters missing from the game but I can't recall if they were just toys or if they actually appeared in episodes. I stopped watching the show well before it was off the air, so maybe they showed up later.

Veering off the subject a bit, but the Teenage Mutant Ninja Turtles went into its "red skies" period near the end of its run (much like Batman did later with The New Adventures) and a lot of things changed. They were offered on DVD as bonus "lost episodes" along with earlier syndicated episodes, and at this point in the run, it really feels like the show was creatively drained and desperate to remain relevant. The jokes and silliness were trimmed way down, continuity become more important, and they've now got a human partner who regularly transforms into a yellow mutant of indeterminate species. Who is this guy, and why should I even care?

The 1990s were a rough decade for the heroes in a half-shell. They also had a live action series with foam rubber turtles like the ones from the films, fighting new, Saban-like villains and hanging out with a shy, stoic female turtle that nobody acknowledges as canon in the years since. If they do DLC for this game, I hope they skip both Venus and whoever the yellow were-mutant was.

Played a couple intro levels co-op last night. Echoing what others were saying, it was fun and nostalgic, though I think my shriveled-up cold dead heart didn't find quite as much joy in it as healthy people can. I picked Don because duh, he's the best, but I kept getting my ass beat (because of how slow he was?) so I messed around with Raph and Mikey later and seemed to have a better time of it. (I should try April too.) I also think I was having some Joycon troubles, but that's not the game's fault.

Whining ahead: I was running into a lot of the same frustrations I did with Streets of Rage 4, which is that it often seems like there's just no way to avoid a lot of enemy attacks, especially boss ones, reactively - you need to have memorized everything they can do and read them like a book to avoid them, because none of your options will actually protect you if you're too late. Also, the "resurrect your friends" option is more like torture when your chance of ever doing so during a boss fight is pretty close to nothing. I don't know if this is just because I'm used to more modern games with their fancy dodge-rolls and parries and have just forgotten how to play old-school games, or if that's Just How Games Were back then, and/or I'm just bad. Ah well.