Zef said:
I feel a tangent about to begin...
Click to expand...

Kishi said:
Moves predictably but in a way that makes you stop and think about what you're doing. Balances the danger it presents and how hard it can be to hit by dying in one hit. Pairs well with hazards and other enemies as an added distraction. Symphony of the Night added a variant that can petrify the player character, but they were still just a minor annoyance in the non-linear games until Aria of Sorrow, where the map designers realized they could line the bottom of vertical shafts with defense-ignoring spikes to simulate the feeling of getting pitched into a bottomless pit. An extremely good, sound, memorable design.
Click to expand...

I think you're in the minority here.

Staff member
Moderator
I mean, four people voted for them, and they were in all of those people's top ten.

I did not participate in the vote but the assessment is sound. Love Medusa Heads.

We welcome non-voters to participate in the conversation!

WildcatJF said:
We welcome non-voters to participate in the conversation!
Click to expand... just don't wait around too long

sometimes they get a little impatient to go on walkies

Here's what our donors had to say:
​

How do you not love these guys? They’re a really tough enemy with limited range, and in many instances, they can also be good boys if treated with some kindness. Right from the start, there was a lot to them: in SMB3, they’ll break free of their chains if you hang around long enough. Bowser befriends them in SMRPG and gets to use them as weapons, the single Chain Chomp and its liberation is one of Super Mario 64’s most iconic setpieces, and even Link gets to pal around with one for a while. I suppose all of the instances when they’re helpful isn’t necessarily in the spirit of Greatest Enemy, but I can’t deny those instances have helped endear me to the critters. There’s even a secret single specimen in Yoshi’s Island that guards one of the game’s most clever secrets. ~ Beta Metroid​
Click to expand...

Take away, take away
Take away this ball and chain
Well I'm lonely and I'm tired
And I can't take any more pain

WildcatJF said:
If you want any sort of context here about our guest:
https://wildcatjfart.wordpress.com/so-this-webcomic-hub/ (search Shi Kurai on this page to jump to the exact area of reference)
Click to expand...

I remember flipping through one of the unofficial Mario 64 players guides back in the mid 90s to read the enemy names. When they published this guide, the enemy names hadn't been localized yet, so the writers only had access to the Japanese names. I was like, "What the heck is a WAN-WAN!?"

I think my blurb covered most of my opinions on these good dogs. Other than we need a Chain Chomp partner in Paper Mario! In a way, Bowser's Chain Chomp in Super Mario RPG was kind of the prototype for "classic enemy species become allies" in the Mario RPGs...it's just a shame that her moment of being a character and not just a weapon is limited to one scene.

Also, the fact Chain Chomp got four votes, all in the top 20, and two in the top six, and didn't crack the top 10 on the list is fascinating to me. Some big-time favorites coming up!

How could I not vote for such good good doggos.

Have you seen the last few entries? It's almost like the enemies are splitting all of us apart.

Ah, yes, we are still a functioning museum, after all. Even if chaos spins all around us... 
Here's what our donors had to say:
​

What an excellent combination of deadly and endearing. I love how the game rewards you for sneaking up on them with a myriad of confused and startled one-liners, endearing you to the very same thing that just tried to laser you in the face. They're only doing their jobs Chell, geez. ~ Ixo​
Click to expand...

I love their little voices ~ nataeryn​
Click to expand...

The cake is a bake

When I saw what the entry was, I was worried I'd forgotten it. But I hadn't so good job, Issun!

Turrets are definitely deserving of a top ten spot. They're endearing and deadly in equal measure.

Are you still there?

Dammit, I forgot the turrets. Well, that was a triumph....

I'll leave my gamer card at the door.

My excuse is that Turrets aren’t enemies; they’re friends.

Oh yeah, well my excuse is that I haven't ever finished Portal 1 or 2.

Who's the fake gamer now!?

Wanna see the most 2008 video? Here's Portal: A Day in the Life of a Turret which I am linking and not embedding because 2008 humor, c'mon.

Anyway. Turrets! I love these things!

Time for Round 6 of "Didn't Make the Cut for a Full Exhibit but Are Still Rad": What is it with birds as video game enemies, huh? This trained hawk is one of the tougher foes to beat in this seminal PC game. This spicy dragon is a greater threat in the Dig Dug universe thanks to its scorching breath, giving it a ranged attack in a game where space is often at a premium. Goblins in FFXI are rather cute telepathic creatures whose society is fairly advanced, meaning "the hero" will run into a plethora of occupations whenever encountered. Not all of them are antagonistic either!​

What is it with birds as video game enemies, huh? This trained hawk is one of the tougher foes to beat in this seminal PC game.​
Click to expand...

Birds: being assholes to players since the very beginning.

(This does make me wonder what was the very first asshole bird enemy in a video game.)

Frygar will eat your quarters.

Torzelbaum said:
This does make me wonder what was the very first asshole bird enemy in a video game.)
Click to expand...

Was it ever proven that the pong ball wasn’t a bird’s egg?

Positronic Brain said:
Was it ever proven that the pong ball wasn’t a bird’s egg?
Click to expand...

If it's a bird egg then it's a really tough one. Little is known about the Phanto masks that haunt Subcon. The best archaeological source we found was this reproduction of a sacred site's decoration at the entrance of a temple for the Subcon people: 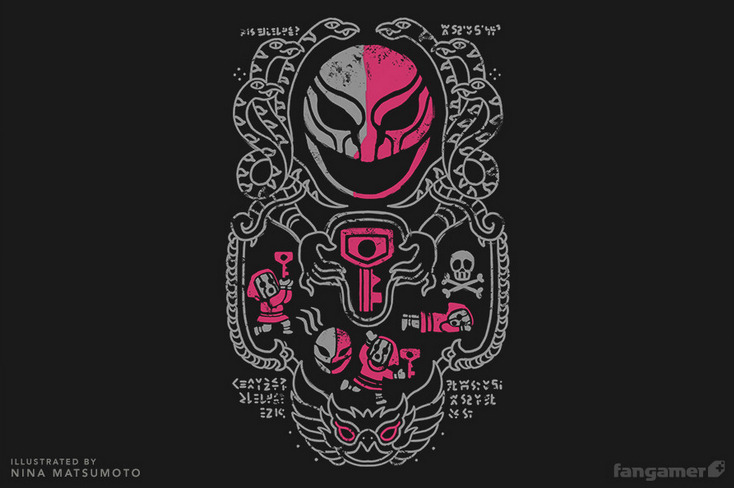 I'm a shape shifter
What else should I be?
Please don't take off my mask
Revealing dark