The other HAMM3R BROZ (Super Mario) 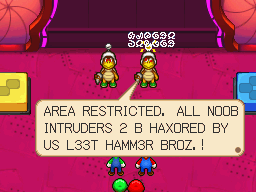 Can you find the hammer bro in the water?

Here's what our donners had to say:

There is no hammer bro in the water. There never has been
This is a joke, new content tomorrow​
Last edited: Thursday at 1:30 PM

Hm. Yeah...whoever did this was fairly skilled. Almost as if they themselves were part of the code to get in....

Not bad. I could have used someone as quick and resourceful as you for our Thunderdome years ago.

What...who's speaking? My headphones aren't even plugged in...

I does heard it

Huh...well, whoever that was, they're gone. Thunderdome...you mean those music contests the Talking Time forum does? What would...I get the feeling our hacker friend has been here before. Well, maybe not this version of the boards...I'm going to need some time to investigate this with the staff here. But I can say we shouldn't have any more "l33t" posts like that for a while. I'll work on beefing up our digital security.

Thank you Marina. I'll do some detective work on my end, too. We do not need any further deterioration of the Valdez Museum of Video Game Box Art brand.

I just can't get enough of their gargle warcry. such derps ~ nataeryn
Click to expand...

Killing these time and again, then realizing the singlehanded genocide I had wreaked upon their kind was what made World of Warcraft too dark for me to continue.

I am a monster.

Where there's one murloc, there's twenty. And they've all aggro'ed on YOU.

Well except for this guy. Solo murloc is sad murloc.

ATTENTION: We had a small incident at the Valdez Museum of Video Game Box Art. A thorough report will be issued tomorrow.

Some of the earliest enemies in all video games, this iconic sprites blazoned themselves on the eyeballs of millions of "heroes" trying to shoot them down in 1979 and beyond. They slowly crawl closer to the Earth over time, and gain speed as their numbers reduce. Legends!

Invaders are like the defacto go-to enemy in broader culture, y'know? Plop a picture of an invader down and it works basically like shorthand for video games as a whole. There's even a little invader emoji on smartphones for heck's sake. ~ Ixo
Click to expand...

So iconic it is often what is used to graphically convey 'Space Invaders' to people. ~ Torzelbaum
Click to expand...

He won "Most chances of becoming an icon of videogames" in its high school yearbook ~ Positronic Brain
Click to expand...

These mask-covered baddies made a memorable debut in Yume Kōjō: Doki Doki Panic, and Nintendo incorporated them into the Super Mario canon thanks to the localized Super Mario Bros. 2. Shyguys were among the first to be introduced outside of Subcon, following Bob-ombs and Pokeys by becoming one of the primary foes in Yoshi's Island. While fairly benign in SMB2, piloting Autocannons and Ostros being their most ambitious endeavor, Nintendo has let their creative sparks fly with them since, with a multitude of offshoots like the tribal Shyguys, Flyguys, Pastry Guys, and even serving as the Kart substitute in Super Smash Bros. They love tennis.

These guys do such a good job at portraying the hard-working, mischief-loving, comically inept minions. My favorite instance of the Shy Guy are the lines of them that hang out at the top of the screen and pass dynamite to each other in an attempt to drop it on you in Yoshi’s Island. If you ground pound and shake the screen, it makes them fumble it, and the one who drops it looks down in shame, while the next one in line looks back and forth in confusion, and all the rest look away and shake their heads.~ Beta Metroid
Click to expand...

The door opens, the room winces

I didn't include Shy Guys on my list for this Top 50 but I did have them at #14 on my list of Top 50 Mario entities. They're good bad shy boys. One of those enemies I feel a little bit bad about killing. I would rather just leave them be but they just happen to have the misfortune of being between me and my goal.

Even though the Invaders are crabs, octopuses and squids.

I had specifically voted for the Crab (AKA Medium) Invader* because it seems to be the one that is used most often to represent the game (it is used for many of the emojis** that WildcatJF mentioned). Also I do think it is the coolest looking of the three common invaders.

But all of the Invaders are good bad Space boys who have an excellent attack plan which was displayed in an episode of Futurama. 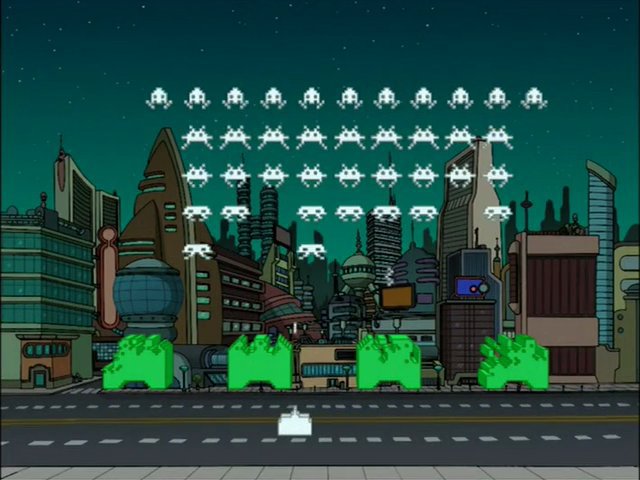 (I'm sure some of you can hear the game's sound effects in your head just by looking at this picture.)

*Who sort of look like they move exclusively by doing jumping jacks.

** Which appear to be called "Alien Monster" to try to avoid copyright infringement.
Last edited: Yesterday at 7:04 PM

What is a crab but a small hard dog?

Octopus Prime said:
What is a crab but a small hard dog?
Click to expand...

You can't argue with that logic!

Given that your vote was the only one specific to one invader, Torzelbaum, I made an executive decision to combine it with the other two.

WildcatJF said:
Given that your vote was the only one specific to one invader, Torzelbaum, I made an executive decision to combine it with the other two.
Click to expand...

That's fine. I know you had said that there were some enemies you would count separately but I don't remember the Invaders being on that list.

Super Mario Bros. 2 was one of my first games and the Shy Guys made a big impression. Bunch of solid looking dudes.

Johnny Unusual said:
Super Mario Bros. 2 was one of my first games and the Shy Guys made a big impression. Bunch of solid looking
Click to expand...

A Shy Guy doesn’t look like much, but consider; Mario, a full grown man, can stand on its head without It even slowing down

They're shy not weak.

Staff member
Moderator
They're not really shy either.

Now boos, those are some shy fellas or ladies.

Poor Snifits. Left to the dustbin of history.

Daikaiju said:
Poor Snifits. Left to the dustbin of history.
Click to expand...

Well that's where those jerks belong.

Daikaiju said:
Poor Snifits. Left to the dustbin of history.
Click to expand...

My headcanon is that Snifits are Shyguys who get over their social anxiety.