I actually was just playing this because I felt like revisiting it for the first time since release, but seeing this thread, I'll toss in my contribution: 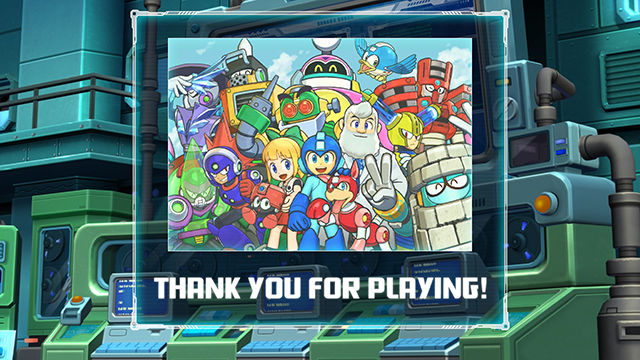 Hell yeah! I love MM11, it's up there among my favorites.

Finished off those dastardly robot masters in MM1 and MM2 last night. So add 14 to the tally.

Also, someone who doesn't post on TT, but who wants to help SAVE SANTA via rampant robot-destruction is also contributing to MEGAMAS this year; so we can add another 10 courtesy of Mr. (?) Drazen of the Mission to Zyxx Maximum Fun discord server

And you can add Zur, Vile Visage and Twin Astral from 20XX to the list, too!

As well as Shatterbeak, Perforator, Death Blossom and... err... that wheelie guy

No foolin', I've been looking forward to this year's MEGAMAS for some time. Last year I took the chance to play through the X series (which I had never given the proper time of day before), and this year I think I'm going to go back to them and do Zero modes for the games that have it.

But first I ran through the original Mega Man X. Last year, I was not particularly enthusiastic about it, but as I went through the others— and found enjoyment even in reviled games like X3 and X6— I began to wonder if my lack of enthusiasm was just growing pains as I struggled to acclimatize to the series (historically a problem for me). So I thought it'd be a good idea to give it another go— and yeah, now that I have grounding in the series, X1 is a real delight. No frustration to be had this time!

8 more Robot Masters, and Bass both with and without his dog; that makes ten more

I will do this, in order.

I will play every Mega Man game I get my hand on.

I beat MM1-6 on an original NES, because Mini-Lyrai's autism meant she never understood that you can just stop doing something if its hard.
My first injection into the internet was a mega man sprite comic community.

My time is now.

Staff member
Moderator
It's been several years so I decided to replay Rockman 5 Air Sliding, a hack that lets you slide any time during your jump ark. This change leads to tight and considered level design that's just a blast to mega man through. Along with the level layouts the hack also plays with new ideas for boss and weapon behavior. I'm not one to take OG Mega Man 5 to task, it's long been one of my faves, but this does feel like an idolized version of it. Chock full of neat ideas and surprising moments, RM5AS wins a hearty recommendation from me, and if nothing else, Gravity Man's stage is not to be missed.

12 more robuts for the bonfire.

That’s be 193, but I also took down the 8 Robot Masters of Mega Man 9 (just not the Wily Stages, since I don’t have fun with those so I guess the real total is 201!

Kind of starting to feel like I should move the goalpost of 500 a bit.

Staff member
Moderator
5000 got it

I'm fighting a helluva sinus infection right now but managed to also fight some robots. MM3 robot masters down. So add 8 to the pile.

Going NyQuil myself into oblivion but I can already hear the MM4 bosses quaking in their metal boots. Tomorrow for you all.

Mega Man 11 was a lot better than I remembered it being; really enjoyed myself with it, a lot more than I did the first time.

Anyway, that's 241 AND it's me finishing the CLassic Series, NONE TOO SHABBY!

Staff member
Moderator
I enjoyed Rockman 5 Air Sliding so much I decided to check out the creator's only other hack: Rockman 2 Yendor Code. I don't know what Yendor means, I guess that's the code. This was Yuki Miyuki's first hack and you can tell. It's just as inventive and transformative as R5AS, but clumsy and a whole lot meaner. R5AS is a challenging game but because its so polished it feels achievable. Yendor Code on the other hand possesses the true and blue heart of the romhack. It's tuned to challenge players who eat Mega Man 2 for breakfast. Alas I'm getting rusty in my old age and I had to rely so heavily on savestates to get past the first robot master that any Gamer Court in the land would convict.

Past the first stage things got easier, as Yendor's weapon roster is useful in that really satisfying crunchy way that only a few Mega Mans (4, X, your favorite) manage to achieve. Each weapon possesses the soul of its original but tweaked in extremely helpful ways. For example, holding down B when equipped with Leaf Shield causes it to turn off and on repeatedly. This allows you to chew through tough enemies with a kind of chain-saw effect, but you have to get close in. Each weapon is similarly balanced with none of them becoming overpowered. This gives them a lock and key effect along the lines to how Mega Man 9's weapons are designed, though not going as far as that game's extremes (no robotic bees to fetch items for you). I wonder if Yendor Code's rough difficulty lends itself to the design in this way. Finding the right weapon to get through a mean situation feels great and lends the game a puzzle quality. And once you've learned a level you can fly through it with all the confidence of a seasoned Darks Soulser. That's the true spirit of Mega Man, right? To bungle through the eight stages until you find one you're just able to scrape up a win, and from there move through the weakness chain, building strength and exploiting knowledge of previous attempts, returning to once difficult stages with arsonal and skill, till the last of them barely feels like a speed bump. This game does that pretty well.

I want to talk about the weapons some more, they are cool and fun.

Air Shooter - Doesn't deal damage, but blows enemies upwards. If they're near the top you can blow them off the screen and away. But otherwise you can sleekly slip under them as you bounce them up.

Quickerang - Creates a cloud of boomerangs that spin behind you and then forward. Feels like a machine gun, and chews through ammo as fast.

Metal Blades - Ignores I-frames. Tears through enemies in one or two hits but at a reduced ammo capacity. They don't cost enough to make you feel stingy, but expensive enough to make you weight the cost of using them for their diagonal benefit.

Item 2 - Straps a jet to Mega Man's back and pushes him rapidly forward. Allows for massive leaps or dashes under enemys. Perfect for speedrun tech. It's no dog-jetpack granted, but so few things are.

The standout moment is the boss refights, strangely enough. From the teleporter room you can hop into battle with Wily right away but Wily Machine 2-Mk-2 will likely tear you to shreds. Each refight, which features harder versions of the robot masters, reduces the amount of projectiles the Wily Machine will throw at you, and make it venerable against that robot master's weapon. A very cool tradeoff of tackling several hard refights versus a singular but very tough boss. It's an approach I could see working well in an official game.

Mega Man 3 and 4 are done. It's like an old coat that fits you perfectly still. Your hands remember everything, even if your brain doesn't.

Megaman Zero 3 cleared! Haven't played that one in a long time, was a good romp. Legacy Collection made it significantly easier with its Save Assist mode; basically adds checkpoints everywhere and gives you infinite lives, but still keeps the game as-is otherwise. Anyway, that was 11 robots, plus a fake X, plus a fake(?) Zero, 13 in all!

Staff member
MMX3 finished. I'm not convinced I've beaten this game before! I don't remember any of the Doppler stages, and I sure don't remember Kaiser Sigma.

12 bad robots in the scrap heap from this one, thanks to Vile, Sigma, and Bits and Bobs. I defeated all four with help from Rookie Hunter, and I don't feel the least sorry for it.

Anyway! X3: not the best game in the franchise.