The Ultimate Final Fantasy Thread: This Guy Are Knock You All Down

Well, at least the theme song is in it.

"I hear the kids like those games of throneses and gods of war. What if..."

Although with the brand struggling to stay relevant for almost two decades now I'm not surprised they're integrating the Big Cultural Moments into this.

Peklo said:
Joyless "prestige" violence with women existing in extremely ancillary male-propping roles, if at all. Fool me once, I guess.
Click to expand...

Yeah, even giving this the benefit of the doubt and assuming there are more, better female characters than XV and the trailer just did of poor job of showing that, this feels like its trying to reimagine Final Fantasy as a Game of Thrones type thing. Maybe that would work for the Tactics sub series, but I want the main series to be more, I don’t know, fantastical.

Speaking of FFIX, I'm really enjoying replaying it right now. This game has some amazing set pieces and I would be down for a whole game set on the Mist Continent.

Sorry, all y'awl, but I was sold the instant I saw that Phoenix is a Thing That Is Happening in this game. Every other impression I got from the trailer was just heavily biased from that point on.

But even beyond that, combat looked like What If Noctis Were In Tsushima Oh And Also Malboros so that's... pretty much my ideal game? The Throney plot shenanigans felt awkwardly edited, but I blame that on wanting to cram too much background info into a single trailer. And I don't mind the loss of magical sci-fi as long as we get some classic FF robots and hi-tech somewhere in the second half of the game. The lowest-tech FF is, what, 3? And even that had submarines.

Excuse if I'm not exactly thrilled by the announcement of a Final Fantasy that looks like every other big budget wRPG in the last decade while I am currently replaying a game where one of my party members is a rat with an awesome hat and coat.

If you wanted goofy shit, that was all Sakaguchi. And nobody bought Lost Odyssey either when it was originally released or when they put up the backwards compatible version on XBONE.

I mean, FFXV has Prompto. And I spent 90% of the game wearing the Chocomoogle T-shirt instead of the boring black duds, which made everything 900% more fun. I can't speak for XIII but X and XV have plenty of humor, just not the cartoony kind.

(I... I assume Type-0 has some kind of levity somewhere? But I watched an LP of it and Jesus Christ it's basically Final Fantasy Type-IDEON here.)

OTOH, I haven't gotten far in Lost Odyssey yet but the game opens with an apocalyptic cataclysm, and the first couple Memories made me bawl like a baby, so I'm hoping your statement means it lightens up soon.

There are goofy things in there; goofy Memories even, but they serve to leaven the experience, not serve as the basis for it. It's very much a game about tragedy and the passage of time, and what do you do about both.

Mightyblue said:
If you wanted goofy shit, that was all Sakaguchi. And nobody bought Lost Odyssey either when it was originally released or when they put up the backwards compatible version on XBONE.
Click to expand...

To be fair, Microsoft did give it away for free upon its initial digital release on the 360 and Xbone.

Peklo said:
Joyless "prestige" violence with women existing in extremely ancillary male-propping roles, if at all. Fool me once, I guess.
Click to expand...

Listen, you know I agree with you. But yoship's efforts in FFXIV are fantastic and have lots of women involved in every level of the story. FFXIV's one stumbling block is more violence against women than I'd like, which stands out because the game is otherwise so progressive narratively. Y

Yoship and Heavensward writers and other staff from XIV means this game will be special, and that for once I'll take this as a mainstream media focussed trailer than the end product.

I know you all that have more experience with FFXIV than I do have a great deal of faith in Yoshida and whatever project he's involved with based on that track record, but it honestly means nothing to me. Should XVI somehow have the exact same writing staff and production circumstances that resulted in a game like XIV (an impossibility), it doesn't mean trusted creators couldn't turn out something less interesting, less considered, less kind, less good in another time and place. Maybe Yoshida will be a fine guiding presence in the role of producer for this game. Maybe the director (Hiroshi Takai) will bring the best out of them both because of their prior working relationship. Maybe XIV writers like Natsuko Ishikawa will be involved (I don't know if they are). It's all best-case supposition based on hopes and dreams, and at this stage, there's a trailer that's uninteresting and contrary to the associations that make XIV beloved, and it is what I continue to judge.

Staff member
Moderator
Peklo, I get that. I normally have no faith in anything. But I have faith in this.

Staff member
As I pointed out on Twitter yesterday, the entire audience for the XVI trailer is XIV subscribers, and if anyone else liked it that's entirely incidental. Too many other things SE has done have been met by one of their loudest fan bases as "That's where my subscription fee went!?" so they got out ahead of it for once.

Destil said:
As I pointed out on Twitter yesterday, the entire audience for the XVI trailer is XIV subscribers, and if anyone else liked it that's entirely incidental.
Click to expand...

I've seen a fair bit of enthusiasm about this from folks who love DMC5, and to some extent the trailer is intended for them, as well.

nijhazer said:
I've seen a fair bit of enthusiasm about this from folks who love DMC5, and to some extent the trailer is intended for them, as well.
Click to expand...

Yeah, this is me. I love FFXIV as well but I'm not gonna evangelize it. But slap on a DMC combat system into a Final Fantasy?? Holy shit sign me up.

Considering the events that bookend Heavensward for the most part, I uh, maybe?

Currently playing Final Fantasy V again on mobile; heading to the library now. Limiting myself to alternating between this and FF9 so maybe I can actually finish it again; not easy when I own like 11 mainline games between my phone and consoles. And that's not even counting the gachas, spinoffs, and direct sequels.


I'm still not 100% thrilled with the game's visual makeover, but I do like that the cast is to scale with their in-battle selves and that the backgrounds are scaled to match. I mean, there's still crappily tiled meteorites and some sprites looking kinda weird and wrong, but honestly I'm more forgiving of visual missteps here than what happened to Final Fantasy VI. 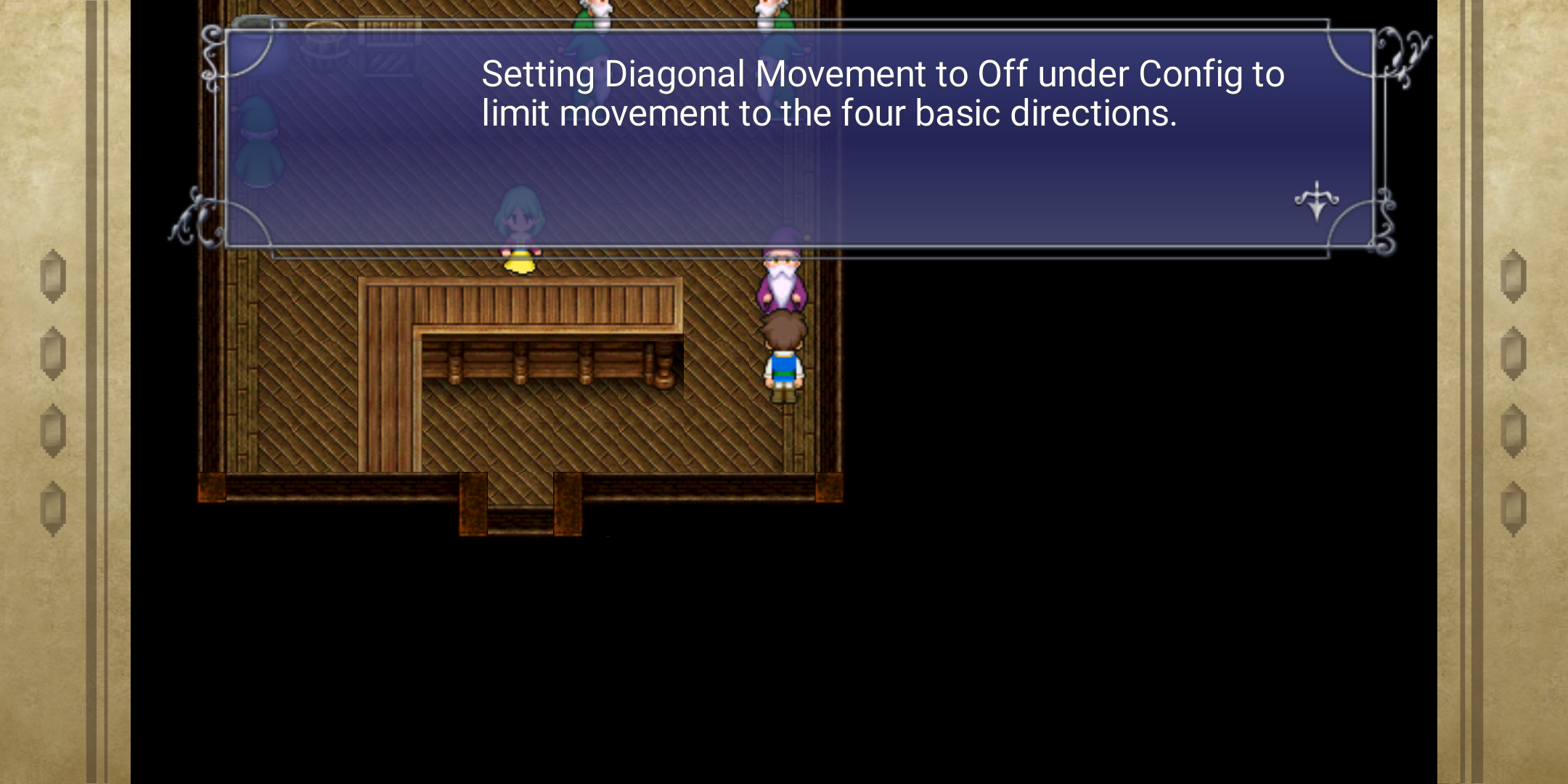 Sometimes it shows when lines were made for the remake and not directly copy/pasted from the GBA localization.

I know it would've been a lot more spritework given how expressive FF5's cast is but I think it's a shame that job changes still aren't reflected on the field sprites.

I'm using time magic a lot more this run. Still a lot of situational stuff I rarely use, but being able to speed up my mystic knight or berserker is very handy.

Karnak Castle, the original timed mission, is still very devious. The designers knew exactly what they were doing, they know you want all that treasure. That's why they lure you in with bait like this: 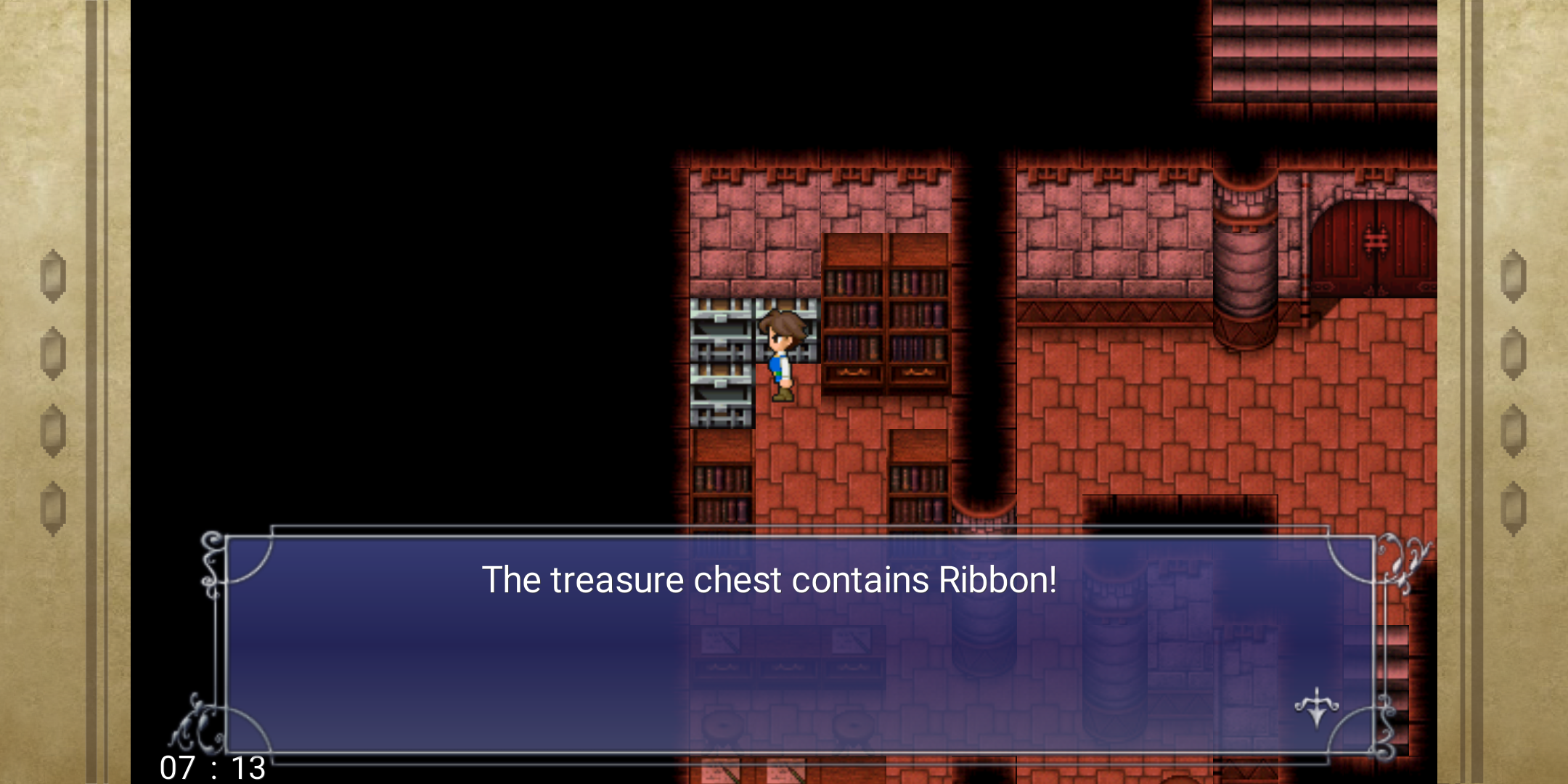 which leads to lots and lots of monster-in-a-boxes like this: 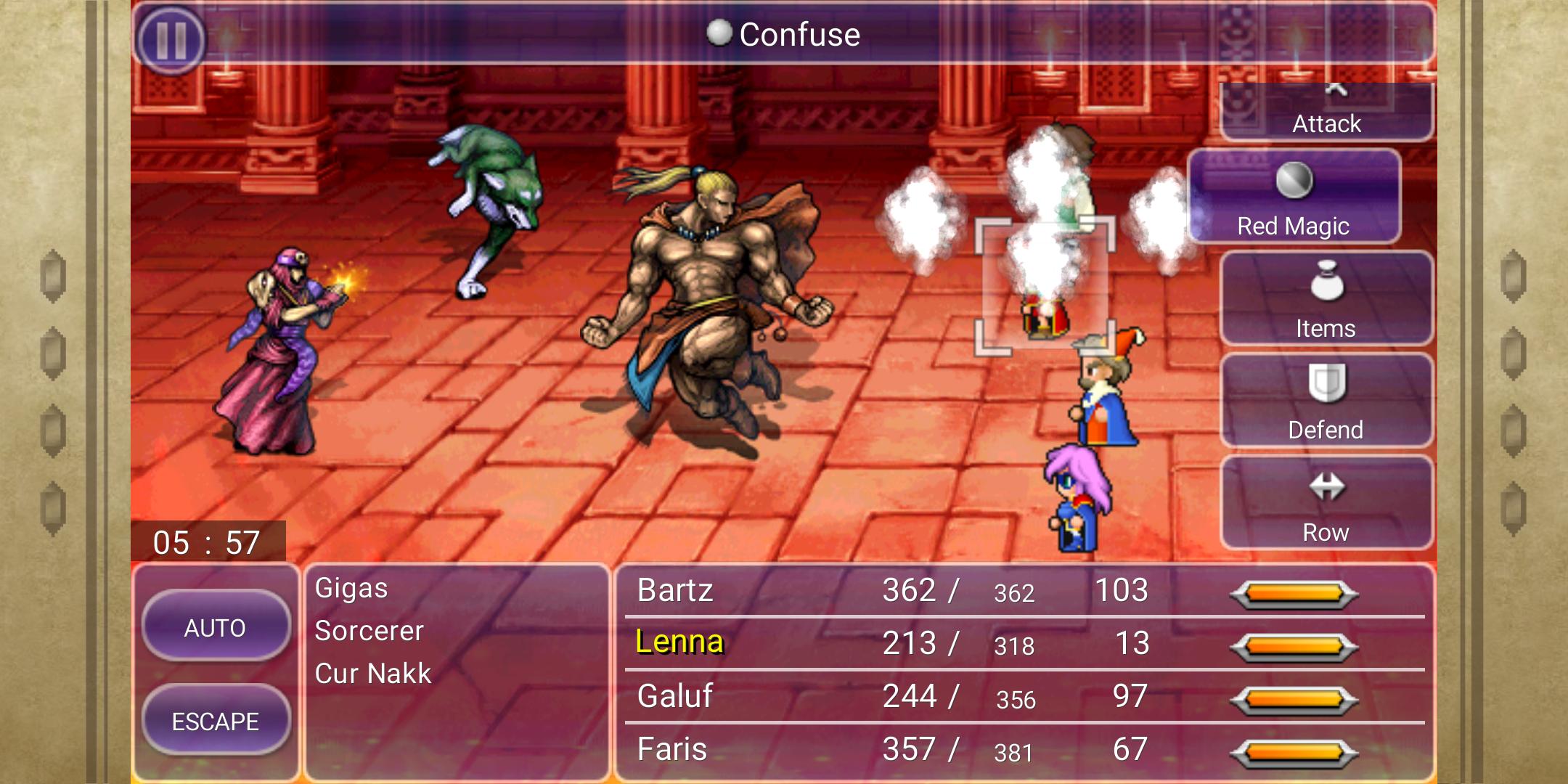 and suddenly you run out of time and get blown up because you just had to see if every one of those booby-trapped chests on the second floor had something other than another dumb elixir you'll hoard forever in it without referencing a FAQ.

The good treasure is totally worth grabbing, though. Especially that Esuna spell.

Talkin' about stuff I've been playing.

Final Fantasy V: Got my ship, lost my ship, got a black chocobo and the jobs I didn't get from the exploded crystal. I really like how much optional content opens up in World 1 once you've gotten to that point.

There's like three new towns you can visit (four once you has birb) and only one is absolutely required to visit. You can get a new summon in the woods, go treasure hunting in a cave full of murder squirrels, acquire some new bard songs, and learn a little more about Bartz.

Final Fantasy IV 'DS' (It's on mobile but still...): In retrospect, I'm all the more impressed this game was even a thing. Final Fantasy III DS was pretty compromised with its endless groups of all of two monsters, and FF4 had both the ATB system and a fifth party to take into account.

The in-battle framerate ends up more like the PlayStation games, but somehow Matrix managed to keep enemy counts mostly similar to the original 2D game. Along with having more actual 3D background features and even a few voice acted cutscenes.

Shame Square Enix doesn't offer more versions of these games, though. Nothing against the DS game, but I'd really like to play one or more of the 2D versions on modern platforms (officially) someday.

Final Fantasy XV: I gots all the dang frogs. Used a FAQ, but those rainbow frogs are already basically FAQbait so no regrets.

Even if the combat's not so hot I still really like exploring this game world.

Final Fantasy Record Keeper: Reinstalled this and booted it up for the first time in over a year or so. I checked out the relic draws and timed missions for a bit, sighed, and immediately uninstalled it.

I just don't have the patience to learn what all this nonsense means all over again and the pop-up windows after literally every relic draw I exited were irritating. I'll get my classic Final Fantasy games fix by continuing to play classic Final Fantasy games instead.
You must log in or register to reply here.
Share:
Facebook Twitter Reddit Pinterest Tumblr WhatsApp Email Link
Top