The Ultimate Final Fantasy Thread: This Guy Are Knock You All Down

The 30th Anniversary of the original's U.S. release passed recently, and murmurs of FF XVI are on the horizon. This is your one stop shop for general news and discussion for the greatest video game series of all time (at least I think it is).

FF or Zelda, one of the two.

Enters, pursued by a bear

Droewyn said:
FF or Zelda, one of the two.
Click to expand...

Zelda, but that's because I didn't play a Final Fantasy until I was 15 (FFIV on the GBA).

despite the focus I’ve been giving to the 13-trilogy, lately, I’ve also been plinking away at Final Fantasy XV-Portable recently, which starts off as a perfectly acceptable Cliff Notes version of the main game with stripped down, but still fun, combat. Then it gets progressively harder and harder to follow narratively since there’s a heap of stuff this version simply doesn’t cover.

Apparently Healing Potions are just, like, Gatorade, it’s just that being in Noctis’ hands gives them medicinal properties. Which isn’t the craziest bit of world building in the series but it may be my favourite. 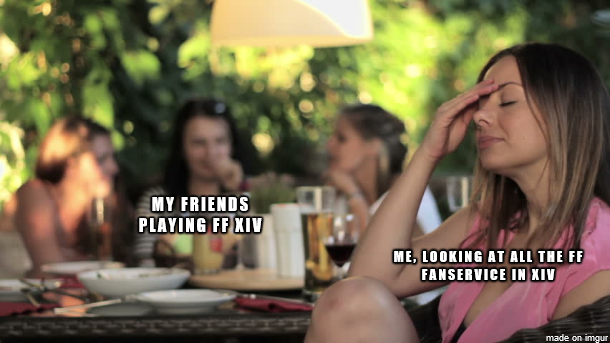 Now, you get the whole base game and first expansion with the free trial for FFXIV, Zef...

Zef said:
Not played, but want to:

Yeah, I got some bad news about that one:

It died the way it lived;

Without Zef having played it

Augh, I had it on my phone for years but I never started playing, and now I get a connection error. I guess that's the mobile game experience in a nutshell.


TyrMcDohl said:
Now, you get the whole base game and first expansion with the free trial for FFXIV, Zef...
Click to expand...

Well, yeah, that's why I'm sitting there contemplating my woes on a cross of my own making while my friends are all already there and enjoying themselves.

Zef, I have empirical evidence that a Final Fantasy XIV player's favorite pastime is seeing their friends' blind reactions to events in the game.

TyrMcDohl said:
Zef, I have empirical evidence that a Final Fantasy XIV player's favorite pastime is seeing their friends' blind reactions to events in the game.
Click to expand...

Oh absolutely, we love that shit so much.

TyrMcDohl said:
Zef, I have empirical evidence that a Final Fantasy XIV player's favorite pastime is seeing their friends' blind reactions to events in the game.
Click to expand...

Juno said:
Oh absolutely, we love that shit so much.
Click to expand...

The Gameplay: I said as much in the What Are You Playing thread, but 3D multiplayer games have advanced over the 17 years since this game's original Japanese release. This game was originally designed to be controlled with the Game Boy Advance's D-pad and limited button layout, and it still shows with stuff like having to flip command pages to choose the Defend option and having no control over movement speed. And if you want to use magic when you have no other players...

Then there's the myrrh cup you gotta tote around. Mog helps out with that if you don't have another living person or three to help out, but he's also susceptible to tiring out, leaving you to hold the chalice for a while. Honestly I would've preferred 1-3 CPU players over Mog 'cuz it'd at least give the other monsters something to chew on.

With that said though, toting around a proto Battle Royale ring aside the simplicity of the experience is a thing I like about this game. There's no Diablo loot or MMO-esque frivolous nonsense moves where you have to figure out which are actually viable; there's just an attack command, a defend command, and some charge attacks (decided by equipped weapon) and temporary spells you charge to use. There's craftable gear, but the recipes are pretty basic compared to Monster Hunter or whatever. And your upgrades are just claiming which stat-buffing relic you like after finishing a stage.

I mean, there's a lot of fun to be had in those more complex games too, but there's nothing wrong with a more accessible gameplay experience. A big reason why I've come around to the game is 'cuz I just like running through dungeons and hitting monsters without worrying about which perks are bolted on my racket.

The Aesthetics: The FFIX-esque aesthetics* this game has going on are pretty amazing and I'm disappointed the only other FFCC titles with this look are defunct WiiWare games in different genres with overpriced DLC.

And the music is amazing. This is one of the few games I bought the soundtrack for; still got it around somewhere.

* Literally in some cases, a number of enemies are very specifically their Final Fantasy IX models. Though really FFIX had some amazing models so I don't mind this.

Multiplayer: I have not done this yet and probably will not do it until I pony up the $30 for the full game and the promised fixes happen. I can't say I'm thrilled about friend codes, region restrictions, or unreliable connections.

I mean, I know I could play the other base game dungeons this way, but for me a big part of the experience is traversing the land, seeing the vignettes with the other caravans and visiting different cities.

You don't really get that with the LITE edition. I mean, they cut you off from even seeing one lousy post-year celebration.

New Stuff: So I guess you can transform into many of the NPCs now, huh? Those are nicer prizes for stamps than some caravan racing minigame, even if you do have to have a specific species of a specific gender to access each one.

Speaking of Mimic stuff, it's also what makes up a good portion of the DLC. Got some characters from each game there. Really makes me wish extensive remakes for the DS games would happen or that the Wii stuff would show up again at all in some form, but if you want Layle or Sherlotta you can certainly pay $4 for each of 'em if you want to.

There's also some weapons and buff items but mehhhhhhh...

Anyway, will buy after I renew my Switch Online sub.

I hate everything about the way the Crystal Chronicles remaster multiplayer works currently and it has nothing to do with the bugs they've promised to fix. It is astonishing how bad it turned out after the sorry excuse they gave for why the pre-existing local multiplayer had to be removed. They cited confinement to the local console to be a problem for local multiplayer which is the apparent reason they prioritized online multiplatform functionality so more people could play together... but the local multiplayer already existed and given how everything else they didn't change works just fine I have complete faith it would have too. It would've made more sense if they meant to imply that somehow the pre-existing offline multiplayer in the game's code would somehow prevent new online multiplayer code from being functional across multiple platforms... but in their first announcement about how it wouldn't be included they also stated the exact solution: selecting between Offline and Online. And then in the rest of that explanation they just completely lied, saying we'd "... enjoy the same multiplayer user experience they did back in the day with the original game." To be fair I guess the ridiculous restrictions somewhat emulate getting hold of enough Gameboy Advances and link cables, but you only had to deal with that one time, not every time you started the game up, and it didn't actually prevent me from playing with certain friends. But I definitely missed the part where every player had to get story progress separately. This feels like a miniature repeat of FFXIV 1.0's problems. It's absolutely wild to me.

All that said I think I'm gonna go through FFVII Remake again. My first playthrough in games I really like tends to be a little... idiosyncratic in ways that make things take a lot longer. Like filling out the Bestiary so that every enemy has every tertiary thing checked off about exploiting their weaknesses, staggering them, using limit breaks on them all that. So a fresh playthrough where I just ignore all that will be a nice palate cleanser.
Last edited: Sep 14, 2020

Honestly I think budget issues were a pretty big factor here. The new content basically amounts to an expansive playable roster of preexisting characters (probably not too hard to do since everyone has similar proportions), extraneous voice acting, and extra dungeons cobbled together from bits and bobs of existing dungeons (allegedly; have not played them). And it's probably a lot "easier" to set things up for online play than retooling the entire UI to work better for GBA-less local play.

My main issue with it is why can only the host can get myrrh? What a dumb decision.

The ghosts of spaghetti past probably means that the host only being able to get myrrh is a thing buried deep in the original MP model that the redevelopment team wasn't given the time or money to fix. The whole project screams cheap-ish nostalgia grab than a serious update or remaster.

myrrh doesn't really matter, though, so it's fine


aturtledoesbite said:
myrrh doesn't really matter, though, so it's fine
Click to expand...

I admit I haven't played in a few weeks, but don't you need it to unlock more content/dungeons?

I admit I haven't played in a few weeks, but don't you need it to unlock more content/dungeons?
Click to expand...

Sure, for the first four years.
Once you get to year 5, though? Game is wide open.

I didn't know that... Shows how long I played it back in the day lol

aturtledoesbite said:
Sure, for the first four years.
Once you get to year 5, though? Game is wide open.
Click to expand...

For the reward cycles to max out so you can get the best stuff I think you have to get each dungeon to its third Myrrh drop which definitely matters, if not for everyone (though I forget if Cycle 3 activates the year after you take the second drop, or when the third is available). But even just cracking open the whole map, that would take like 8-10 hours just hammering out progression unless you were racing through every dungeon as fast as possible assuming you always hosted, or played solo. That's a massive chunk of the game for someone that just wants to play multiplayer from the start, and then you still have to deal with all the OTHER restrictions after that which still includes the Myrrh problem if you want to do more than just beat the game.

FF XVI is real now (and coming only to PS5 and PC).

Mightyblue said:
FF XVI is real now (and coming only to PS5 and PC).
Click to expand...

It looks ok, I guess? The combat they showed off reminded me more of XV than it did VII Remake, which I think is a mistake.

Less enchanted by the style they're slinging here than XV but curious who they actually put on this one, strangely a still very auteury series

Joyless "prestige" violence with women existing in extremely ancillary male-propping roles, if at all. Fool me once, I guess.

Yeah I'm really hoping that this trailer is extremely misleading and/or (in grand Final Fantasy trailer tradition) not actually anything but concept renders and faked gameplay of something barely in development.