Prince of Darkness is on my shortlist of Favourite Horror Movies Ever.

Mouth of Madness I wanted to like, but did not

I had heard this was a pretty good underwatched Pooh movie but I really wasn't prepared for what this was. After some overly saccarine Pooh movies, I expected something a little more thoughtful with a nod to the sort of wistful ending of the original film. Instead what I got was a very big broad G-Rated comedy that feels in step with the contemporary comedy of the era (down to Tom Kenny as Rabbit). Such a lateral move on paper sounds like one that would leave me equally unhappy, especially considering the kind of jokes that are in movies geared to the very young but aside from old standbys that feel more like joke filler than actual jokes (such as an "okaaaay.") its... surprisingly effective as a straight up comedy. Like, our characters are still loveable but there's only a minimal "message" and generally no "awww" moments. Its just very silly.

While my preference is the original Disney film's balance of comedy and philosophical musings and sweetness, this take is a completely welcome respite from the other films, which felt like dull echoes. Heck, some of the characters don't even seem intent on sounding like the original voice actors and I sort of appreciate that, as the ones before seemed to feel beholden to a lot of stuff but actually giving the audience very little. Pooh's portrayal is the same in many ways (it's still Jim Cummings, who had been voicing the character for a LONG while at this point), but there's a touch of Homer Simpson DNA in the animation and performance of the character. Oh, he's not a jerk (though is unintentionally annoying) but often loses interest in things that aren't about his satisfaction and is a slow thinker in a forest of slow thinkers). It also isn't a series of vignettes (despite starting with "chapter one") but is still better than the previous stories with a "main plot" because its really just a hang out movie. I could see someone not liking this interpretation, which feels a little more modern and of a different tone than the Pooh they loved but I think it is the second strongest of the 5 theatrical features and at a very lean 62 minutes (WITH CREDITS!), is a breezy way to spend an evening.

Neo Skimbleshanks said:
Oh, also watched all of Elaine May's (directed) films bc of Blank Check and she is a genius. Can't decide whether Mikey and Nicky or The Heartbreak Kid are my favorite but doesn't matter. They're all worth watching.
Click to expand...

I'm a little behind on my Blank Check watching (haven't made it through Heartbreak Kid yet), but A New Leaf was a complete revelation. Knew basically nothing going in and pretty much never stopped laughing throughout. Very excited to watch the rest of May's movies.

I don't have anything of substance to add, but I also watched and greatly enjoyed A New Leaf recently. It's available on Criterion, in case anyone who has the service is interested.

Bongo said:
Did you ever watch the Soviet adaptations of Winnie-The-Pooh from 1969-1972?
Click to expand...

Love and Monsters was pretty good. The writing played it safe for the most part, but I didn't mind. One of the all time best movie dogs in there.

Johnny Unusual said:
I have not.
Click to expand...

Of all adaptations, it's likely the closest to the source material. Check 'em out in this playlist (enable closed captioning for subtitles).

All Disney Watch continues with Peter Pan. I really thought that Dumbo was as racist as Disney got, I really did. But nope.

Wound up needing to ride furiously on the Fast Forward button to get through a decent chunk of it.

Pan himself is a serial abductor of children, as well as being a terrible racist and general asshole. I hate him, and sympathize entirely with Hooks desire to murder him with bombs.

In fact, only the characters who were antagonistic towards to leads did I like at all; the Entire movie was basically Hooks, and whenever he wasn’t on screen, it was a waste of celluloid. Also, while I’m generally resistant to Critter Hijinx, gotta say, I liked that croc. He played his part well.

By merit of possessing any kind of discernible personality, Tinkerbell is also easily the most robust and fully developed female character I’ve seen so far. One day, when she realizes she doesn’t need the approval of a man, she will be a formidable force for change in Neverland.

The movie also opened with parents attempting to convince a dog to drug their children. Perhaps Pan was attempting to save their lives, but evil can not be used to justify evil.

I don't remember anything else, but I liked it more than the Disney movie.

There's a reason why Tinkerbell has like eight standalone movies.

FelixSH said:
This is another movie with an interesting book. Tinkerbell tries to make the Lost Boys kill Alice, when she arrives at Neverland.
Click to expand...

Do you mean Wendy? Or is she named Alice in the book?

Zatoichi and the Chest of Gold

Zatoichi #6. This is a pretty good one but also a lot of these fall out of my head once I stop watching them. I remember the villain had a whip? And the chest of gold? This time, Ichi runs across a robbery where the taxes from 18 small communities are stolen by bandits and Ichi gets the blame. He vows to make it right and uncovers a conspiracy by the tax collectors to get more money and shit. I think I liked it more than the last one and it carries on the tradition of "some bandits are good and some people who follow the law are scum" but it wasn't as well played as in #3, which I think might be my favourite, in retrospect.

I watched Fist Fight with Charlie Day and Ice Cube. There is no reason for anyone else to do so.

Speaking as someone midway through watching ASiP, I... kind of want to see what shenanigans those two can get up to

That's why I watched it. It is a potentially very good comedic pairing, and there are many other at least sometimes funny people in the movie (Jillian Bell, Kumail Nanjiani, Tracy Morgan, Dean Norris, Christina Hendricks) but the jokes are just bad.

Rascally Badger said:
I watched Fist Fight with Charlie Day and Ice Cube. There is no reason for anyone else to do so.
Click to expand...

Every time I watch a movie with Charlie Day in it and it's not good, it makes me very very very sad. He deserves better!!!

4-So said:
Do you mean Wendy? Or is she named Alice in the book?
Click to expand...

Oops, I meant Wendy, of course.

I watched the new Mortal Kombat so that nobody else has to -- this movie was dumb and bad, and not in the fun way it was supposed to be.

Alternatively, the new Mortal Kombat is dumb and bad and absolutely worth a watch. Same great dumbass energy as the original 90s flick. If I have one complaint, it's that the ultimate fight would have been the penultimate fight in any other movie. It ended on a note that felt like it wasn't finished which makes sense: they are obviously fishing for a sequel, considering the end sequence.

Well, now I don’t know who to believe! 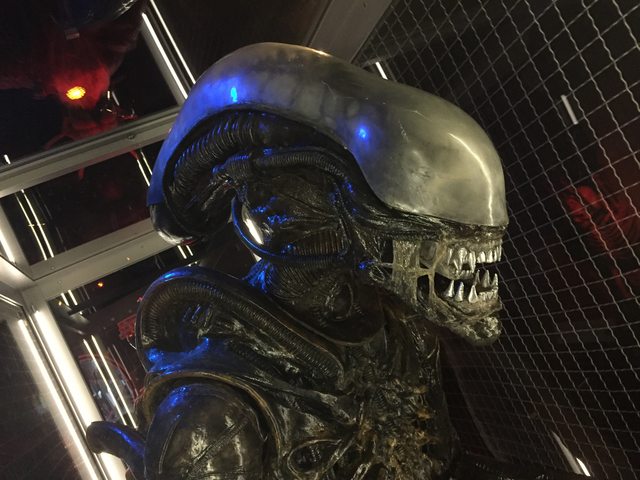 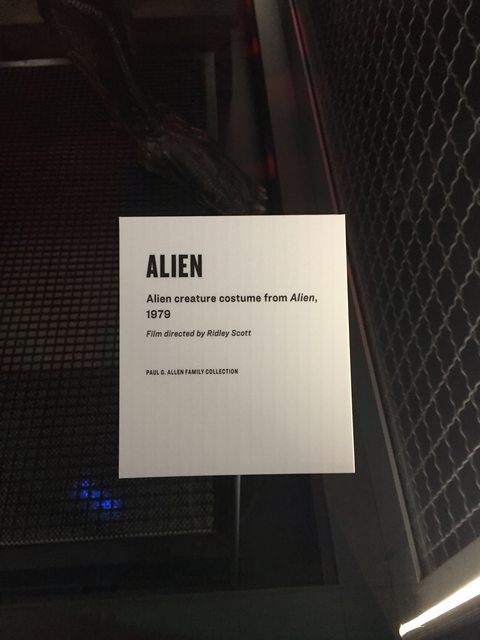 In space, no one can hear you appreciate one of the greatest science fiction films ever. Unfortunately.

How did the actor even SEE out of that thing? And was the snap-jaw animated only for closeups, where the whole head could be a puppet, or was it spring-loaded in the suit too?

I have no idea about the vision or the jaw. I would imagine that that info is on the special features of one of the Alien DVDs or Blu-rays.

I visited my brother in Seattle in 2018. At the time, MoPOP (Museum of Pop Culture) had an exhibit with a lot horror and sci-fi movie costumes and props. Images above are from that exhibit.

Just depends on your budget for the stuff you really like! I own a prop from Pacific Rim. A reasonably cheap prop, mind you. (A tray and food packaging set from the mess hall scenes.)

Zef said:
How did the actor even SEE out of that thing? And was the snap-jaw animated only for closeups, where the whole head could be a puppet, or was it spring-loaded in the suit too?
Click to expand...

The mask looks slightly transparent right around the eyes, and there weren’t a lot of scenes where the Xenomorph was in full view and especially mobile, it probably had enough visibility for that much.

Im assuming there was a second more elaborate mask for close ups for the inner mouth, but that’s a guess on my part