Feelings on the art direction aside, the feeling of playing the game is really nice! And I do like the classic filter though I probably won't play with it.

I only checked it out briefly though. Not doing a deep dive until I finish Miles Morales. I probably won't stop bagging on art and enemy design changes I don't like (sorry Yangus) but the actual play experience feels like it's going to be a good time!

Wait I take back what I said, I listened to the Maiden Astraea theme from the Remake and it sucks, this game is now a crime and you're going to jail if you play it (the bad jail, the one with the criminals)

(Alixsar Joke Intrepretor Services™: I still don't care about the game, but that's a huge bummer)

estragon said:
is there a toggle to put in back in the UI
Click to expand...

I can't get over how great it would be to open up the settings menu and see, alongside options like "adjust brightness" or "enable subtitles", a toggle for "restore old cat's ring icon".

Staff member
Moderator
My initiation went more smoothly than expected. The game is tough enough that you can't take anything lightly (at least not without knowing what's lying in wait around the next corner), but being just a little bit careful goes a long way. I've died four times, but none have felt "real": Once was the forced death at the beginning of the story, and the other three were from attempting to gingerly step onto the same elevator in dwarf town and watching my character instead stride clear over it and off a cliff.

Game's fun, though. Parrying attacks feels really good. Can't wait for the next stream. A friend has turned me on to this, so I might even be able to interact with the multiplayer stuff.

did they seriously make "get good" a message

Yeah, that elevator is rude. All already-moving elevators are dicey in Demon's Souls.

So thanks to the relatively quick load times of the PS5, I've discovered a new early level grinding spot: the opening of 4-1. You don't need to go in that far - you can just fight the first skeleton for a little under 300 souls and then reload the area and fight him again. You don't even have to go back to the Nexus! Just select 'Islands Edge' and it'll reload the area and the fight, meaning you don't even really have to risk any souls at all. I got 4 levels and a couple hard stones from the vendor in 2-1 with relative ease, so tomorrow I think I'll put on a podcast, get some more early levels and upgrade more equipment to make the early game a breeze.

Looks like Bluepoint remade all of the loading screens from the original. Here's a gallery if anyone is curious.

And the originals, for comparison.

Regulus said:
Looks like Bluepoint remade all of the loading screens from the original. Here's a gallery if anyone is curious.

THIS I love, and I'm very happy they did it.

I really dislike especially how Bluepoint's depicted the women in this... either they get super glossy and pouty lips and increased bust sizes like with the Maiden in Black, or the redesigns of their attire become more attuned towards an ornate aesthetic instead of a kind of distinctive-yet-plain functionality, with Selen and Mephistopheles sticking out especially. Even Yuria's basically a model according to conventional beauty standards, when her original concept art (which reflected moderately well in the game model) evoked a witchy uncanniness that played a part in the visual semiotics of her ostracization and mistreatment in the narrative, in addition to the textual material. It's hard not to read all these differences as a less interesting take on the concepts surrounding them.

Yeah... the Maiden in Black in particular looks like someone decided to make her "2020 sexy". Lip filler and all. I don't know why they feel the need to do this kind of stuff.

I think the men are also extremely bad. They all have to look like Extremely Epic Badass Gamer Characters for some reason, even The Monumental who shifted from something like a grinning Buddha to a constipated Saiyan baby.

Maybe I'm coming around to the rest of you. Those new renders look worse to me across the board. Oh well. I'm supposed to get my PS5 on Friday and I'm gonna start the game with the classic filter on and see how that goes.

FWIW, I don't know how representative of the game those renders are -- I've seen in-game shots of some of these characters that look different.

I'm really not a fan of the new sound effects for Latria 1. I watched a video and they completely change the feel.

Also chalk me up as another one who sees the soundtrack as a downgrade, and I think the Dark Souls trilogy and Bloodborne have fantastic music. I played the original and remake versions of Fool's Idol for my brother, who has never touched a Souls game, and unprompted he even said the new version sounded kind of generic compared to the original.

Regulus said:
FWIW, I don't know how representative of the game those renders are -- I've seen in-game shots of some of these characters that look different.
Click to expand...

Oh the models are weird and uncanny, and not in the normal From Software way. Especially when they talk. In all honesty I wish they'd just do the mouth flapping thing the original game does instead of the poor lip sync they have in the game. All in all that's been way more noticeable when playing the game than the monster designs, lighting or architecture. Not a deal breaker but jarring all the same.

I should be clear, I like that they bothered to do the loading screen renders at all. I think a lot of the designs themselves are just worse for sure so my excitement was less about the quality of art direction and more that an effort was made. Selen and Mephistopheles like Peklo pointed out are probably the ones I think are the worst, though Selen was kinda close to being good. Her render at least seems in a similar style to the changes to Boletaria Castle for instance. But they really had to give her boob plate for the render? Really? Honorable mention to the render of Doran not having "for men" written somewhere on the ridiculous armor design.

Mephistopheles and Yuria's renders are especially ridiculous though. The most generous interpretation I can imagine is that someone thought Demon's Souls needed to be more anime. Maiden in Black's render is similar in tone to theirs for sure but honestly I have by far the least problem with it.

The original renders also tend to have much more interesting composition. These new ones seem to focus a lot on showing off the character faces, which was not really a priority in the original (possibly because half the renders appear to use the same face, lol).

They made everyone Too Hot

Also Patches has a pretty defined look so it's weird they changed it? 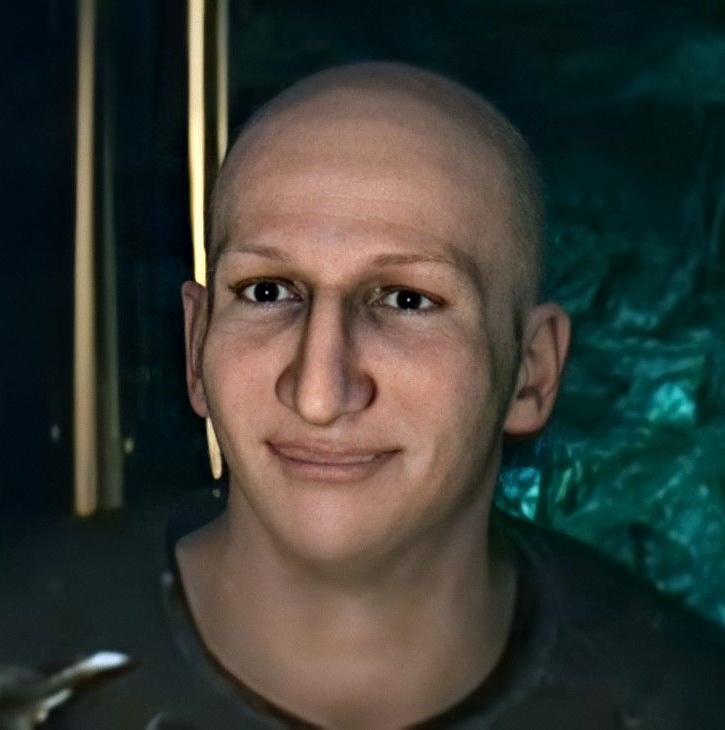 Played this for about two hours yesterday. The game is gorgeous but feels odd? The skeleton of the thing is the same as the old game, so it feels like something straight out of 2009 but with eye-popping modern graphics and music. They added the roll as something you can do to smash boxes a la Dark Souls; think I read somewhere that wasn't a thing in the original. It just feels odd they didn't change anything else. (Or maybe they did, not that I would know since I didn't play the original.)

Overall, feels good. Dark and weird with a lot of "oh damn" moments, just like any Souls should be. Maybe playing Dark Souls has given me the insight to understand the language the game is speaking but I assume it'll get a lot harder. So far, it's been fairly easy going.

Demon's Souls is probably the easiest of all the Souls games. It's got some rough spots, but for the most part its bosses are easier and there are tons of very exploitable mechanics. Its reputation mostly comes from the fact that it was the first of its type for many players.

There are some quality of life improvements over the original, the most notable of which is probably the multi-directional rolling. Like the original Dark Souls, you were previously only able to roll in 4 directions when locked on. It's supposedly at least 8 now (maybe more, haven't played it).

I'm not really sure where the idea that you couldn't roll into boxes and stuff before came from, but I've read that in a few places, too. I'm fairly certain you could do that in original. Pretty sure I saw Kishi do it a few times last week, even.
Last edited: Nov 17, 2020

I think the opening of Demon's Souls in particular is extremely gentle if you know the basic mechanics and the tricks these games like to play on you. This is also true for Undead Burg in Dark Souls, I think. Despite their reputations and marketing these games honestly at least begin with a gentle difficulty curve that gives you time to get comfortable.


4-So said:
They added the roll as something you can do to smash boxes a la Dark Souls; think I read somewhere that wasn't a thing in the original. It just feels odd they didn't change anything else. (Or maybe they did, not that I would know since I didn't play the original.)
Click to expand...

I think the biggest gameplay change I've heard about is that healing grasses have weight now, but that should still leave you with much more plentiful healing than Dark Souls, I imagine.

Oh, they also added an option to send items you pick up straight to storage if you're overburdened.

Regulus said:
Oh, they also added an option to send items you pick up straight to storage if you're overburdened.
Click to expand...

In practice I don't think it really affects game balance that much either, because due to how specific builds end up being 99.9% of the time it just helps you to horde items you will probably never actually use. (Does my mage need that heavy equipment at the end of a level that would be a hassle to come back to and will disappear forever if you examine it once and leave? No. Do I want to put it into storage for no reason? Absolutely.)

As much as I dislike... pretty much all of the changes they've made aesthetically, I don't think there's much in there that's going to bother people who aren't already invested in the original. The Satsuki redesign, though... Uhhh... 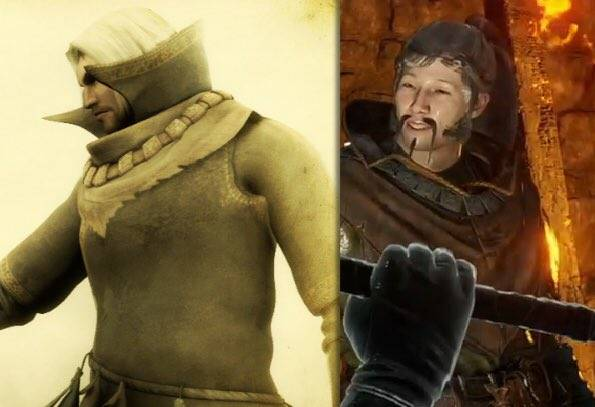 Do you know where it is?

(Mostly I wonder if it's a way to potentially turn off the difficulty of the poison swamp, or if it's a reward for getting through it.)