A Wretched Hive of Scum and Villainy: The Star Wars Thread

The Clone Wars "movie" is best thought of as a mere pilot that was so promising that somebody got excited and put it in theaters. Best not to treat it as a separate thing.

Well, Gina Caranos gone. Which is good because of her hateful, toxic attitude toward gay, trans and Jewish people (that last one was news to me).

Kind of wish I didn’t like Cara Dune so much as a character, but my liking one Star War Guy isn’t worth validating someone like that. Good riddance.

There's still the matter of Rosario Dawson, who allegedly (among other things) assaulted a trans man employed by her family (link warning: description of said assault and other transphobia). Later, most of the claims in the lawsuit against her were apparently withdrawn voluntarily. But was it because the accusations were false, or was it because Finley didn't think he could win against people with more legal resources? If I eventually do start watching The Mandalorian (I'm still holding out hope that it will be released on physical media eventually), it will be something that will be nagging at me at the back of my head.

Gina Carano will go down in history. She blew the chance at her own Star Wars show because she couldn't stop posting.

Octopus Prime said:
Well, Gina Caranos gone. Which is good because of her hateful, toxic attitude toward gay, trans and Jewish people (that last one was news to me).

Kind of wish I didn’t like Cara Dune so much as a character, but my liking one Star War Guy isn’t worth validating someone like that. Good riddance.
Click to expand...

This was kinda overdue, and it's good that Disney clarified things. I liked the idea of the character, but the execution was pretty lackluster. I was never sure how well she could carry a whole show by herself, and acting was never really her strongpoint.

I really have to wonder though how much getting beat in the head for a living contributes to shit like this. I honestly just assume every MMA fighter has a certain level of CTE in their noggin, and that is an extremely pernicious disease that can really twist and warp people's personalities for the worse.

Yeah, I vaguely liked Cara Dune, but Gina can bugger off. Losing your own Star Wars show because you just can't stop being a dick is one of the great self-owns.

Maybe the New Republic show should star this guy and his juggling of being a galaxy sheriff and also his 9-5 job managing a convenience store: 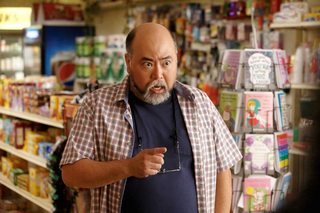 I reached the original, fake series finale for Clone Wars, before the show was renewed for another season on Netflix, and a third time on Disney +. Which was, honestly, a pretty satisfying way to end the show, justifying why Asoka wasn't in Revenge of the Sith and giving an appropriate end to her arc.

Plus it was a pretty solid final arc of the show that, like so many other of the shows mini-arcs, was basically an existing movie with Light Sabers chucked in there.

SpoonyBard said:
Maybe the New Republic show should star this guy and his juggling of being a galaxy sheriff and also his 9-5 job managing a convenience store:

Now that, I would watch.

Guess what's coming to Disney Plus?


But for this child of the 80s, this is a bigger deal.

I appreciate the synchronicity of those two preview images.

They match my emotions as well!

It's also adding the Ewok cartoon AND (part of) the Holiday Special!

I imagine it isn't that good but still.

Droids I kind of want to see again. That and Teddy Ruxpin were my gateways into serialized storytelling. Plus, I have a weird quasi-nostalgia for classic Nelvana. Its a damned shame they never did that Doctor Who cartoon they planned.

SpoonyBard said:
But no Droids?

So it doesn't have what you're looking for?

Johnny Unusual said:
That and Teddy Ruxpin were my gateways into serialized storytelling.
Click to expand...

Oh man. This isn't the thread for it, but hard same with Mr. Ruxpin. It was both my gateway into serialized storytelling AND the crushing disappointment of a series that is left unfinished.

I haven’t finished watching CG Clone Wars yet, but isn’t the Gennedy one sorta canon in that it’s used as wartime propaganda?

I definitely recall hearing about (but not seeing) an episode of CG Clone Wars where Mace Windu had to convince someone that the unstoppable superhero Mace Windu of the Gennedy Series was entirely fictional and the average Jedi wasn’t nearly as invincible as propaganda implied.

This is the closest thing I could find.

I'm just glad to I get to rewatch the bit with Mace and that farm kid.

Some bits, especially Part 2, are probably best treated as outlines of events that don't have a current canonical depiction - in the Clone Wars finale, Mace Windu mentions that General Grievous has kidnapped the chancellor and Shaak Ti is in pursuit. And Clone Wars Grievous is more like Gennedy's sly murder machine than the coughing, sputtering mess of RotS, so presumably that attempt ends similarly.

Thank you Bongo. I needed that laugh.

Do you think Tatooine farms its blue milk? Or maybe the Lars just knew a local importer from Ahch-to.

The blue stuff is bantha milk

The blue stuff is bantha milk
Click to expand...

The Gennedy Clone Wars is on D+ now; given in much more complicated title of “Vintage Star Wars: Clone Wars: 2D Micro Series”