BADMAN (Tecmo's Secret of the Stars) 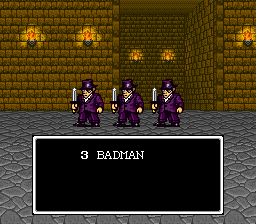 Badmen are the goons of the nefarious Badbad, a gangster who is attempting to dominate the populace of Beegees by the use of the Dog Pill and transforming everyone into dogs. Naturally, Badbad has the only cure, and our "heroes" have to break into Badbad's lair which is populated by hordes of zoot suit henchmen equipped with short blades and a plethora of style. I realize now that they are wearing shades and not an eyepatch, but I suspect at least one of them has an eyepatch on under their sunblockers.

Donors had the following to say:

So it's a stereotypical mobster in a three piece suit but this one is armed with a sword. I dig it. (Thanks to JBear's LP - I have never played the game myself.) ~ Torzelbaum
Click to expand...

Fedora-wearing, gun-wielding Mafia guys who live in a medieval fantasy land and work for a Dracula named "Badbad." A+ perfect game ~ Dracula
Click to expand...

All entrants in the museum had at least two votes above the maximum one person could vote (35 points). I am not worrying about ties being better than another or grouping numbers together; it's all how my spreadsheet sorted the entries when I set it to filter by total points.


"In my head there is a mirror
When I've been bad, I've been wrong
Food for the saints that are quick to judge me
Hope for a badman
This is the badman's song"

Staff member
Moderator
Woo! That's a good #60. No wait, I mean a bad one. A good, bad Badbad good Badman.

Staff member
It's a little weird that you've decided to present this list in reverse order, but I can't argue with the results. There's no enemy more fitting for the top spot.

Enemies are Bad by default, so, of course, the worst one would be Worse than Bad

This thing is already going places.

Staff member
Moderator
What exactly is going on with his Area

What Area do you mean? Area 1? Or Area 2? You couldn't mean THAT Area

Wow, I didn't think any of my oddball choices would make the list so I am pleasantly surprised by this (but I doubt any more of those from my picks will make the final list). What a good bad (or bad good?) way to start the list.

WildcatJF updated the original post to include what I had to say about BADMAN but I had forgot to mention that this BADMAN is my new favorite BADMAN. (Sorry, Final Fantasy 1 BADMAN. But do know that you still take home the silver medal in the Video Game BADMAN Olympics.)

Here's a link to a screenshot of a group of 3 BADMAN from JBear's LP of the game (WildcatJF amended his post to include this image):

I'll need to remember that. I'll go ahead and update the main post with that Torzelbaum.

Even though I may never finish Secret of the Stars, I'll always be grateful to it, and jbear, for introducing me to the wonderful world of the Badmen and the Badbad. Secret of the Stars may be the greatest role-playing game on the super nintendo entertainment system for that very reason.

Kishi said:
What exactly is going on with his Area
Click to expand...

It's a secret [of the stars] to everybody.

These cunning rodents appear throughout the various titles of the Shovel Knight universe. Their first appearance is in King Knight's usurped Pridemoor Keep, and are often used by "the hero" to spring off from in order to reach secret areas. Shovels to the brain won't really help with their creativity or inventiveness, Shovel Knight (and Specter Knight and Plague Knight AND King Knight)! Since the original game a few variants have appeared, with most popping up in the Xbox and PC exclusive Battletoads area where they can be juggled for points a la the NES game. Beyond building their own copterpacks, they are quite skilled with scissors, concrete manufacture and explosives.

Donors had the following to say:

Did this rat even sign up for this job? I'm sorry I have to hit you with this shovel, propeller rat. ~ Dracula
Click to expand...

Simply iconic. Big props to this one. ~ Lokii
Click to expand...

The propeller rats are really cool because they often serve a mixture of purposes on a screen. They alter their movement between hovering in place and moving a few sprite-widths toward your knight. Since they're fairly slow and spend a lot of time motionless, they're not a gigantic threat - usually. They're defeated in a single hit, so one rat by itself is an easy challenge. But they're often placed in areas where you have to climb ropes/ladders and you don't have a good angle to attack them. If you spend too much time on the screen, the rats crowd you out. Or, they're put in as obstacles in areas that include environmental hazards like high winds. If you bump into a rat, it might send you careening into a pit or row of spikes.

But since Shovel Knight characters often have offensive abilities that allow you to bounce off of enemies, the rats sometimes serve as platforms. But touching a rat causes damage, so they're dangerous platforms. Moreover, they might only work correctly if they haven't moved very far from their original placement. So if you see rats, you have to quickly figure out how threatening they are, where you need to be to neutralize them, and whether they might help you get to a secret area. That's a lot to think about!

It's an ingenious design for a flying enemy, and its usages are integral parts of the series' fantastic level designs. Of course, an enemy like this in a game world as limitless as Shovel Knight could have been basically anything. But they decided to make it a rat with a propeller. And that's wonderful.

I'm loving the comics and the humor, but will the museum include a collection of the in-game sprites? I remembered the Propeller Rat well enough, but I didn't know what BADMAN originally looked like until Torzelbaum's post.

Zef said:
I'm loving the comics and the humor, but will the museum include a collection of the in-game sprites? I remembered the Propeller Rat well enough, but I didn't know what BADMAN originally looked like until Torzelbaum's post.
Click to expand...

I can toss some sprites or renders in for these. I'll do that tonight.

Was just going to ask the same thing! The art is awesome but seeing the sprites too would be quite cool.

Anyway, Badmen and Propeller Rats are both lovely, and this is off to a great start.

Okay, I've added in screenshots of the enemy in question to both posts, and will add screenshots moving forward. Thank you for the great suggestion Zef and Kirin!

Oh snap, I didn't even think of Propeller Rats. That's a good cut.

WildcatJF said:
Okay, I've added in screenshots of the enemy in question to both posts, and will add screenshots moving forward. Thank you for the great suggestion Zef and Kirin!
Click to expand...

Thanks! I do love to see how you reinterpret the sprites or how the characters interact in your skits, just that some of these could be too obscure for everyone to remember their original incarnations (Honestly the only thing I knew SotS for was its hilarious box art.)

Dracula said:
But touching a rat causes damage, so they're dangerous platforms.

So if you see rats, you have to quickly figure out how threatening they are, where you need to be to neutralize them, and whether they might help you get to a secret area.
Click to expand...

As any New Yorker can tell you.

True. New York rats will also occasionally adopt you, name you after a renaissance artist, and teach you ninjutsu.

Zef said:
Thanks! I do love to see how you reinterpret the sprites or how the characters interact in your skits, just that some of these could be too obscure for everyone to remember their original incarnations (Honestly the only thing I knew SotS for was its hilarious box art.)
Click to expand...

Thanks for the compliments! It was something I considered but forgot to implement as I do these at 5:30 or so in the morning lol. It's only making the contest better!

Nurses are one of the most common enemies in the Silent Hill franchise, appearing in the very first game as more or less humanoid dressed in nurse's outfits and carrying sharp knives. Known as Puppet Nurses, these were infected with a parasite that gave them a hunchback-like appearance. However, it was in Silent Hill 2 with the redesigned BubbleHead Nurses that more deeply engage with the "protagonist" James Sunderland's repressed sexual desires and his wife's hospitalization where the archetype truly landed. Twitchy, callous and disturbing, the nurses truly stood out in a game full of creative and frightening foes. Nurses would continue to appear in the series, playing off the motifs of the first or second game depending on the title, and stand tall as one of the scariest enemies in video games.

Staring down a dark hall, hearing those drums come closer.