Not something I came up with, but I just want to say that I'm a fan of the theory that Gyro Gearloose is trans. There is, of course, fan art: 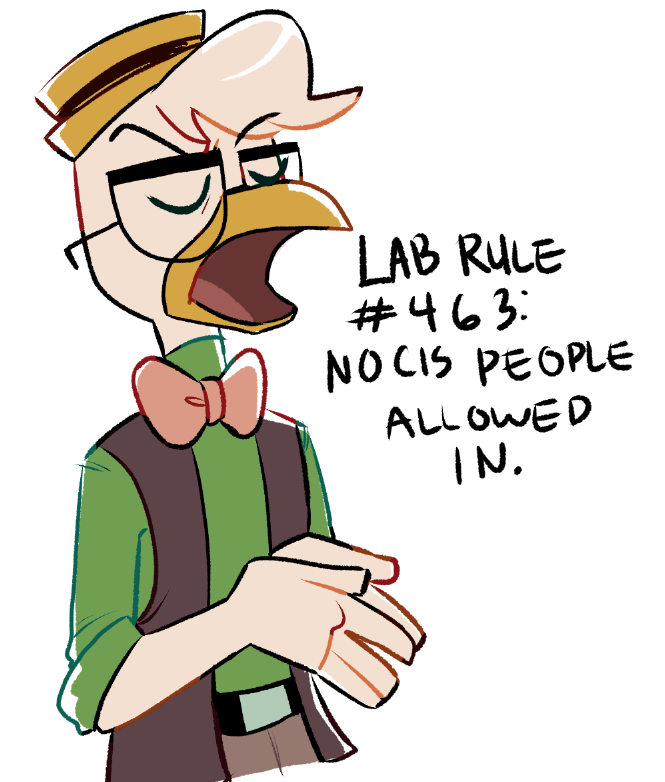 You will never succeed at convincing me that The Great Gazoo isn’t from the same dimension as Mr. Mxyzptlk and Batmite.

I had never thought about it before but now that you have I think I feel the same way.

I don't know if this is headcanon or, like, "writer's theory", but I am convinced all those "just a little genie" characters were the writers of the time tossing in an excuse for why completely ridiculous, "out of continuity" nonsense could happen for this week's adventures... And now the modern equivalent is the continual, fourth-wall breaking "and now the author is participating" stuff particularly made popular by Grant Morrison. Every time you see a story where it is heavily implied "the (real life) audience is demanding it" or "the writers" are participating, that would have been Gazoo back in the day.

Funny you say that because Morrison basically has Bat-Mite say that the 5th Dimension is imagination in his Batman run when Batman keeps seeing the imp while beyond the brink of sanity (and utilizing a second personality he developed for such on occasion).

Of course, I feel like genies in those days were "let's do anything we want" and now it's all Dan Harmon-esque commentary.

The alpha/beta/zeta/gamma/queen life cycle of Metroids isn't their natural life cycle at all, but rather the result of exposure to Aeion energy on SR388. This explains why the infant Metroid just got really large instead, as the Space Pirates didn't know what they were doing, so the infant wasn't exposed to enough of any one kind of energy to Metroid-volve. Federation scientists learned from their mistakes in Other M and Fusion and are able to reproduce the conditions to get their traditional advance forms.

Phazon variant Metroids were all over the place as those conditions were more chaotic with multiple planetary ecosystems, natural vs lab conditions, and corruptive phazon bio meteors resulting in different environments for the metroids to adapt to. Perhaps Prime 4 will introduce a 3rd energy source so there will be a whole new lineage of Metroids.

The upper atmosphere of SR-388 in Metroid 2 hurts Samus. This is because, prior to the start of the game, the planet had been glassed with nuclear weapons by the Galactic Federation. Samus's mission was therefore to exterminate the last enclave of Metroids that survived by being underground. The Federation would have glassed the planet earlier, but until the aftermath of the Prime series there was not enough political will to get the necessary supermajority of the senate to approve this drastic action.

Additionally, Biologic Space Labs was a biotech company contracted by the GF to preserving the wildlife of the planet prior to its nuclear holocaust. Samus's visit to SR-388 in the prologue of Fusion was the result of her being hired in an advisory capacity to oversee the repopulation of the planet, owing to her familiarity with its natural wildlife. Moreover, BSL was already secretly aware of the X parasites, which is why they were able to so quickly conjure up a working vaccine when Samus was infected. Any zombies or infected persons on the station happened to have received a placebo in their ongoing clinical trials (while everyone else was simply underequipped).

Well they do seem to keep showing up in different places across different time periods, so that tracks.

Now I'm just imagining an "omega" The Legend of Zelda game where entering the Lost Woods has random odds on spitting you out into a different Legend of Zelda epoch/game.

Agents of SHIELD is not part of the MCU, but it is in the next multiverse over; reality started to diverge after Phil Coulson was successfully resurrected and while the changes were imperceptibly minor at first they gradually grew more and more irreconcilable with the rest of the the universe.

For all I know this is Actual Canon and not Headcanon

Mad Max: Fury Road is in fact set in the Orre region from Pokemon Colosseum and XD; the games are set in a period of time after the events of Fury Road where mankind's destruction of the habitat has mostly ceased, leading to Pokemon returning to the region. The electrical storms seen near the start of the film were caused by some heretofore unidentified legendary/mythic creature.

My argument is as such: If we could get a Celebi movie that's fundamentally Princess Poke-mononoke, then we can get a movie that's almost exactly Fury Road but with Pokemon.


Most people choose to interpret this in a sexist "Polygamous Gigachad Rex" manner, but since the game doesn't make it explicit, I'm choosing to interpret it differently until word of god tells me otherwise for a number of reasons:


Thank you for taking the time to read my overanalyzing of a single picture displayed for a total of three seconds.
Last edited: Sep 12, 2022

After reading this excellent episode of Wayne Family Adventures (warning: contains depiction of PTSD), I like to imagine that while it wouldn't trigger any flashbacks, Jason Todd still gets a strange unsettled feeling he can't quite explain whenever he happens to watch a TV show where viewers can call in to vote. 'Cause, you know... 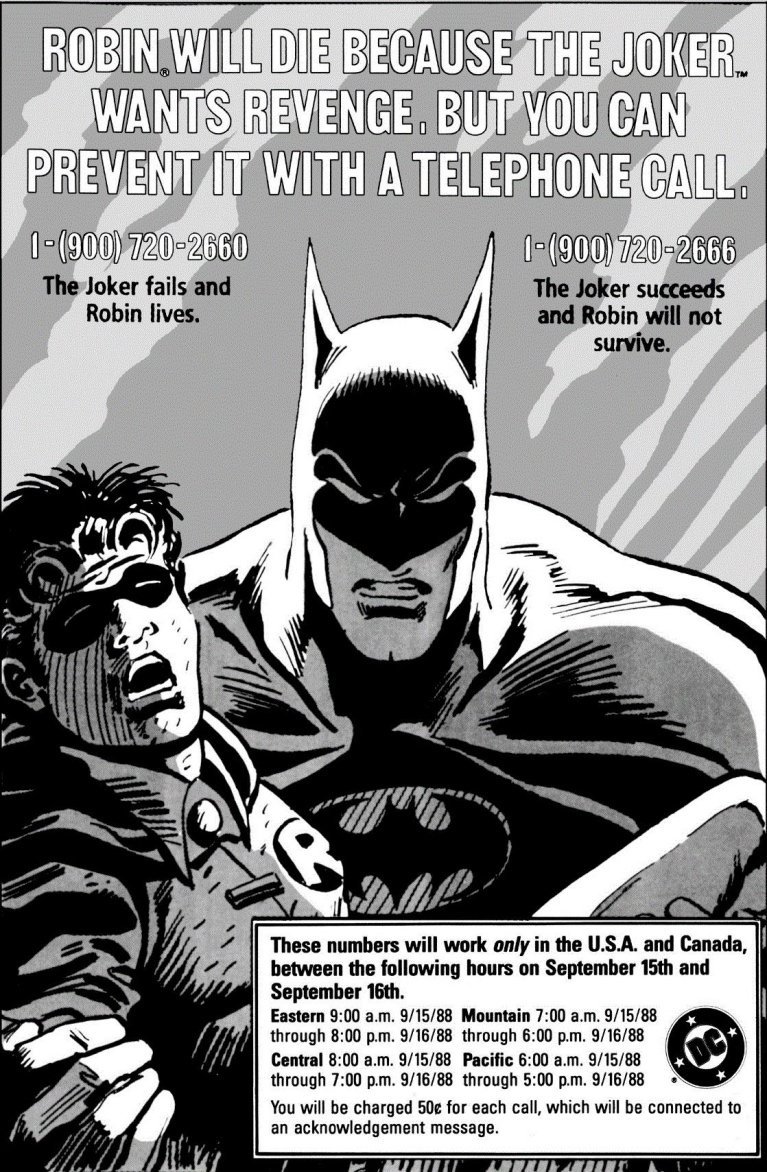 Some vampires like garlic so much (despite it being very poisonous to them) that they fastidiously micro-dose their food on a periodic basis just to get a hit of that taste.

Staff member
Now, we know that in the distant backstory of Final Fantasy VI, espers were created when the Warring Triad infused humans with magic in order to fight for them. Espers become magicite when they die, even first-generation espers like Odin.

My headcanon is this: if the process that Cid developed to infuse humans with magic was sufficiently similar to the technique used by the gods, then that means it made his subjects into espers of a sort as well. Thus, had Celes or Kefka perished before magic disappeared from the world, they, too, would have left magicite behind.

Makes sense but then what would their magicites do?

I dunno. Does anyone actually know what Runic does?

It absorbs the next spell cast, restoring Celes' MP?

Unless you mean like lore wise, in which case probably something involving the same tech as Cid's big magic draining tubes.

So, Celes' Esper summon would be like Golem but for magic attacks.

Bongo said:
Thus, had Celes or Kefka perished before magic disappeared from the world, they, too, would have left magicite behind.
Click to expand...

Unless you mean like lore wise, in which case probably something involving the same tech as Cid's big magic draining tubes.
Click to expand...

Head canon continuation: Cid made magitek knights Celes and Kefka. Celes was granted the runic ability, which allows her to innately absorb magic. Kefka did not have a runic ability in any way. This is why he went coco banana nutso pants. Maintaining recognizable humanity with magic coursing through you is impossible, so some part of the biology mutates. Back in the Triad times, it "mutated" a bunch of dudes and lades into horned monsters and dragons. With Cid's process, the exterior stayed fine, but the brain meats got all twisted up to a bad place. Even random Empire NPCs note that Kefka used to be fine before the procedure. Celes is consistently Celes though because runic absorbs the ambient magic, preventing it from causing any issues.

So, that said, my thinking would be that Kefka would absolutely become magicite, but Celes would just kind of die... weird. Like maybe she'd turn into a magical rock for a whole ten seconds before the husk burned out (or, more appropriately, dried itself out).

Topic of discussion, attempting to deduce the pizza style of Mona Pizza.

Assuming Diamond City in Warioware is part of the Metro Kingdom like New Donk City in Mario Odyssey, it's safe to assume New Donk City would represent New York and/or Brooklyn style pizzas. Also assuming Mona Pizza is in its regional style, this leaves:

Detroit-style: Usually rectangular, so we can probably rule this out too given how Mona Pizza is depicted.
Chicago-style: Big, messy, fatty. Would appeal to Wario.
California-style: Unorthodox, trendy ingredients. Would appeal to Mona.
Neapolitan/Margherita: Traditional Italian. Fits Mona's neighborhood in Diamond City, as she is seen mopeding through Italian alps like scenery.
St. Louis or Hawaiian: Both neither have anything for or against them to my knowledge.

Am I missing any other noteworthy styles?

Based on the clearly defined crust, with a distinct darkened ring and implied shading where the cheese meets it, and the suggestion that at least relative to rival chain Pizza Dinosaur the crust is nice and soft, and the sauce notably thick, I'm going to have to go with Greek style. Also quite popular in New York and its suburbs, and thus presumably also in New Donk. 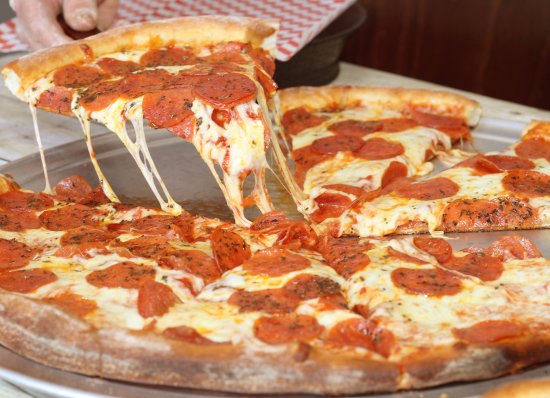