There was some talk in the general SaGa thread about making a separate thread for this, to collect everyone's journeys as we all play through this incredible-looking remaster, so here it is! The game comes out tonight (depending on your timezone). By all accounts, this remaster is going to be as welcoming to new players as SaGa Frontier could possibly be, so if you've ever been curious about the game or perhaps bounced off of it pretty hard in the past, this remaster could very well change your mind!

I'm still having trouble deciding which scenario to play first; my favorite character is Blue, so I want to save him for a little bit later, and try other characters I haven't really touched a lot. I think in the top running for my first choices are Red, Emelia, or T260-G.

I am making a beeline for Amelia's updated quest. I am genuinely curious if this is just a matter of putting back in the (easy to parse from the original code) deleted dialogue/scenarios, or if they went full tilt on improving some of the weird "morals" of her original adventure/endings. I am here for horse and buggy accidents.

I am PUMPED FOR THIS NONSENSE

Staff member
Moderator
I'm still undecided about what platform to get it on. Switch has portability and I got all the other SaGas on there, but Ps4 has streaming and trophies
G

Downloaded it on PS4 last night. Not sure who I'll start with. Asellus has the new stuff, but I might run through Red or Emilia's scenario's first just to reacquaint myself with the world. In any case,

Octopus Prime said:
I am PUMPED FOR THIS NONSENSE
Click to expand...

I also have no clue who to start with. Riki’s my favorite, but I just played through his scenario last year. I might start with someone I’ve never finished before, like Emilia.

I hope the new documentation makes it a little easier to build monsters without needing a guide. I’d love a bestiary of forms I can fill up through experimentation.

I am going to get it on Steam, for the ease of purchase, and also because Steam games are completely painless to stream on discord for the small/ family groups I might want to stream it for. (Permanency of my online foolishness is not something I'm even slightly concerned about.)

I'll see if I can squeeze in some playtime in between binging FF14...

I'm new to this game and based on everyone's comments in the other thread I think I'm going to start with Blue. I doubt I'll start playing tonight but probably this weekend!

Blue was my first for the original so it may just be him. Asellus is my fave but I've played through her scenario twice already, so even though I am super-pumped for the restorations I think I'll delay that pleasure. Otherwise, I haven't actually cleared many other scenarios, so anybody's fair game really. Still can't believe this is happening in any capacity.

Staff member
My favorite is T260G (who barely beats out Asellus simply thanks to my long time love of SaGa robots) but I think I'll save her for later.

Stuck between starting with:
-Blue, my favorite to play as for his overpowered magic
-Riki, who I've never beaten the game as
-Asellus, whose story seems like it would most benefit from a legible script

T260's campaign has an interesting background component that mecs are treated as inanimate objects or property -- threatened with dismantling over minor disagreements, said to not have any feelings, and so on -- despite the fact that they are, clearly, people. And a bunch of them just saved the universe, in the background, with only a drunken ronin and maybe a few other randos as witnesses. Nobody cares, or indeed even notices.

I said in my LP it'd be a damned good story in a game with a better script and storyline development, so I wonder if the remaster does anything with that.

Staff member
Quest Log is really great, as is the combo history.

Asellus stuff: I assume the added material has already started manifesting past the escape from Facinaturu, as I don't remember there being so many options to take. The one that took place when I played last was the chartered plane ride pretty much directly to Owmi that Ciato clues you in on, but this time Zozma can tell you about jumping into Rootville's incinerator, which ends up taking Asellus and White Rose to Mosperiburg, where they're briefly reduced to burnt-out rags from the experience; a chat later with Virgil has them clothed again. The third option, and one I eventually took, was forgoing payment for the plane ride and taking a couple of suspicious people at the bar up on their offer, which lands the duo imprisoned in Trinity Base, forced into Yaruto's "harem." As that whole place is tied up with Emilia's scenario, she makes an appearance in the middle of her own narrative and joins up for the dungeon's duration, chasing Joker who's also briefly seen, and then it's back to Owmi as scheduled. This bit was in the original, but as far as I know, only in Emilia's story, where Asellus and White Rose were the guest party members.

God, I love this game.

Everything you just said has been stated as being in the "intended" column for Asellus from way back in the day, so it's fun to see it all got in there. The "fire route" being fully implemented even confirms why there are "naked" sprites of Asellus and White Rose in the original release's assets. Or at least it confirms the designers weren't just perverts...

I love these HD graphics! I started with Red, who I've played with before but never for a very long time, so I'm not terribly familiar with his scenario beyond the first couple hours.

I'm torn on the battle speed options; before playing this version, I never thought SF had a slow battle speed, but seeing it sped up to 2x does feel pretty nice. But also, I don't feel like I need to have it on constantly. Augh! Also it's pretty incredible they still kept the key shortcut for a soft reset. I can't remember the last game I tried where that was still a thing!

A fast-forward is extremely welcome for SaGa, as the number of battles one fights in these games is proportionally maybe the highest in the genre. There's even an option (which is on by default) that automatically toggles the battles to regular speed whenever someone glimmers an art, just so you don't miss it/can take in the animation. They know the appeal of the system.

Staff member
Yeah, I sped things up for a bit a dense dungeons while my battle rank was still low so it was pretty easy for a while (the cave with the Rune under Kroong).

Got two runes last night and the gift of light magic on Blue. Then we got eaten flattened by a Mimic.

Peklo said:
There's even an option (which is on by default) that automatically toggles the battles to regular speed whenever someone glimmers an art, just so you don't miss it/can take in the animation. They know the appeal of the system.
Click to expand...

Yeah this rules! They know what's up!

Started a game as Blue; was immediately struck dead by decision paralysis. (I guess, um, Rune magic seems nice to start? but i don't know) Have very fond memories of this but probably spent more time being intimidated by FAQs about it as a child than playing it and remember a vibe more than specifics.

Could I do the unthinkable and lose to Rouge so I can stock up on sweet LP merch at no cost but to my pride?

I think I will actually start with Red...

Rune magic means you will go to prison.

Arcane magic means you will get tipsy as hell and drunkenly stumble through a jungle of deadly, sober monsters.

I know my choice.

I will unfortunately never relax so my choice is clear as well...

Just like on PlayStation and when I briefly dabbled with PSone emulation on my phone, I went with T260G as my starter.

the producer of the remaster (miura hiroyuki, also producer for the extremely good DS SaGa 3 remake) was wearing his homemade asellus hoodie for the release date live stream lol 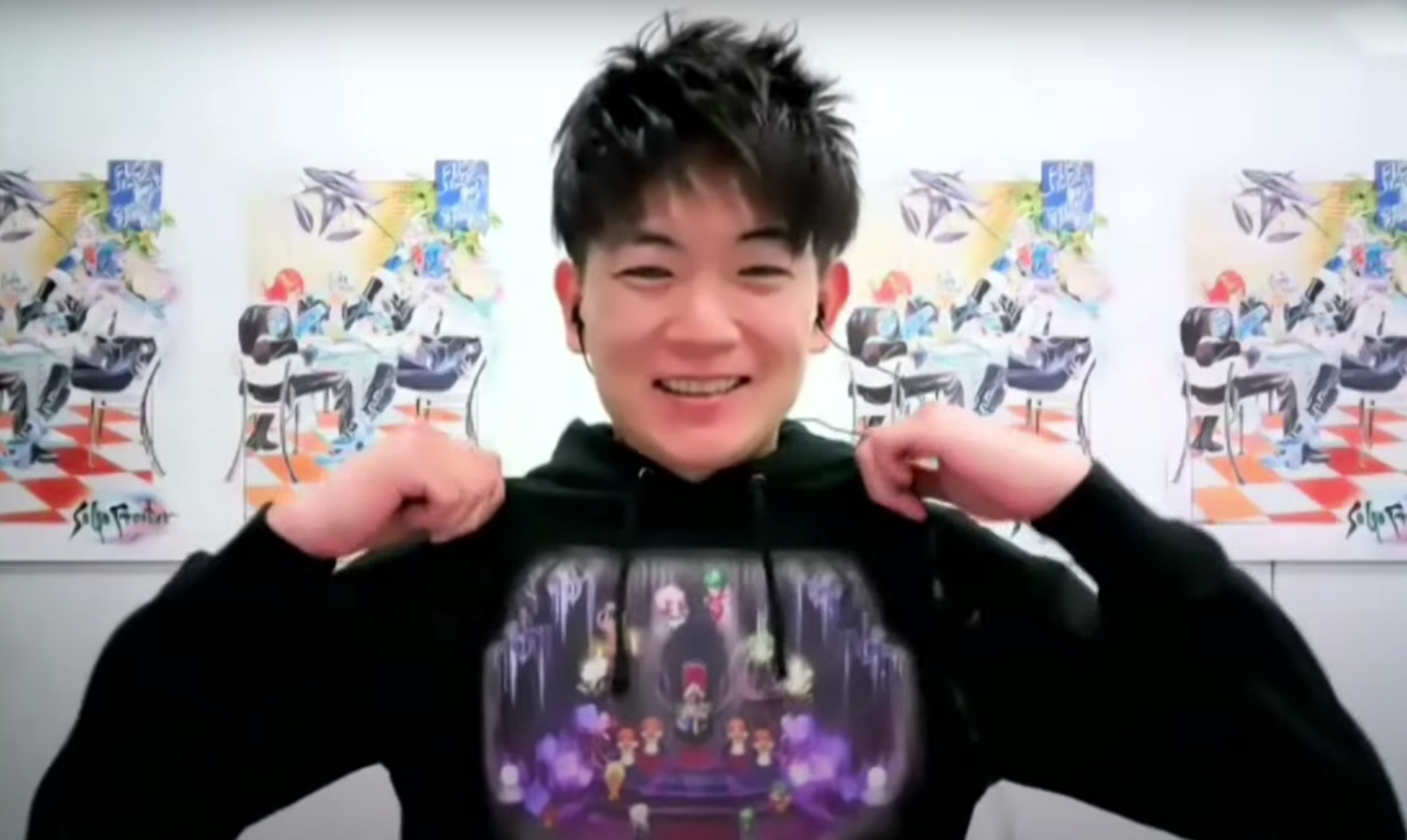 5 minutes into Red’s scenario and I am lost but cannot stop running into this Bunny Lady who keeps blowing air kisses bc she seems to be near some kind of bad guy? Time to try another scenario.

Neo Skimbleshanks said:
5 minutes into Red’s scenario and I am lost but cannot stop running into this Bunny Lady who keeps blowing air kisses bc she seems to be near some kind of bad guy? Time to try another scenario.
Click to expand...

Looking at the story log will tell you (generally or sometime specifically) what to do next.

Neo Skimbleshanks said:
5 minutes into Red’s scenario and I am lost but cannot stop running into this Bunny Lady who keeps blowing air kisses bc she seems to be near some kind of bad guy? Time to try another scenario.
Click to expand...