Red will never 100% Hyrule Warriors (but let's talk about it anyway!)

Hyrule Warriors came out on the Wii U in September 2014, and this game caught my eye immediately when I played the demo at Best Buy, enough that I immediately got the game and ordered all the DLC at that point (I think when I got the game, the Master Quest DLC had just been released). As an amiibo collector here was a great game to play and use my amiibo to unlock stuff and get free bonuses, but that didn't make the game easy mode.

Various DLC packs came out on the Wii U, such as the Master Quest DLC, the Twilight's Princess and Majora's Mask DLC packs, and the Boss Challenge pack. This was a Wii U game with some beefiness to it, there was just SO MUCH to do. I probably put a thousand hours into the Wii U game.

...then they announced an enhanced port to the 3DS. The 3DS version came out on March 2016, which just happened to be at a rough point in my life. I won't go too deep into that, but the short version is that this 3DS port came out in a time where I was only able to game on my 3DS, making this portable game an easy choice and a good way to spend the following year.

This 3DS port had a bunch of new content plus included MOST of the Wii U content. (Notably, the main features missing from 3DS were the Co-Op mode and the Challenge mode). It included a new chain of story missions featuring newcomer Linkle, a new Fairy companion mode, and a new Adventure Mode map based on The Wind Waker. But the 3DS version also got DLC packs, and for the portable game the DLC was all inspired by Link's portable adventures, with a Link's Awakening Pack, a Phantom Hourglass/Spirit Tracks Pack, and a Link Between Worlds Pack. (There was also a Master Wind Waker Map, all to help power up free character Medli).

I had a lot of time to sink into the 3DS version, and even with all of that, I never did quite finish everything in that game.

I had never played a Warriors type game before (it was the Zelda content that got me interested in this game, but I found the gameplay addicting) but I easily found one of my most played games. I even decided to get Fire Emblem Warriors, even though I wasn't a fan of FE, just to try it out and enjoyed that one a lot too!

Then they announced a Switch port was coming for Hyrule Warriors. I didn't get the game right away, but I did eventually snatch the game up when I found a used copy for cheap. Aside from having the content from the 3DS version (with the better graphics of the Wii U version, one place where the 3DS one suffered), there were little costumes from Breath of the Wild for Link and Zelda, and the Challenge Modes from Wii U and Co-Op returned as well! 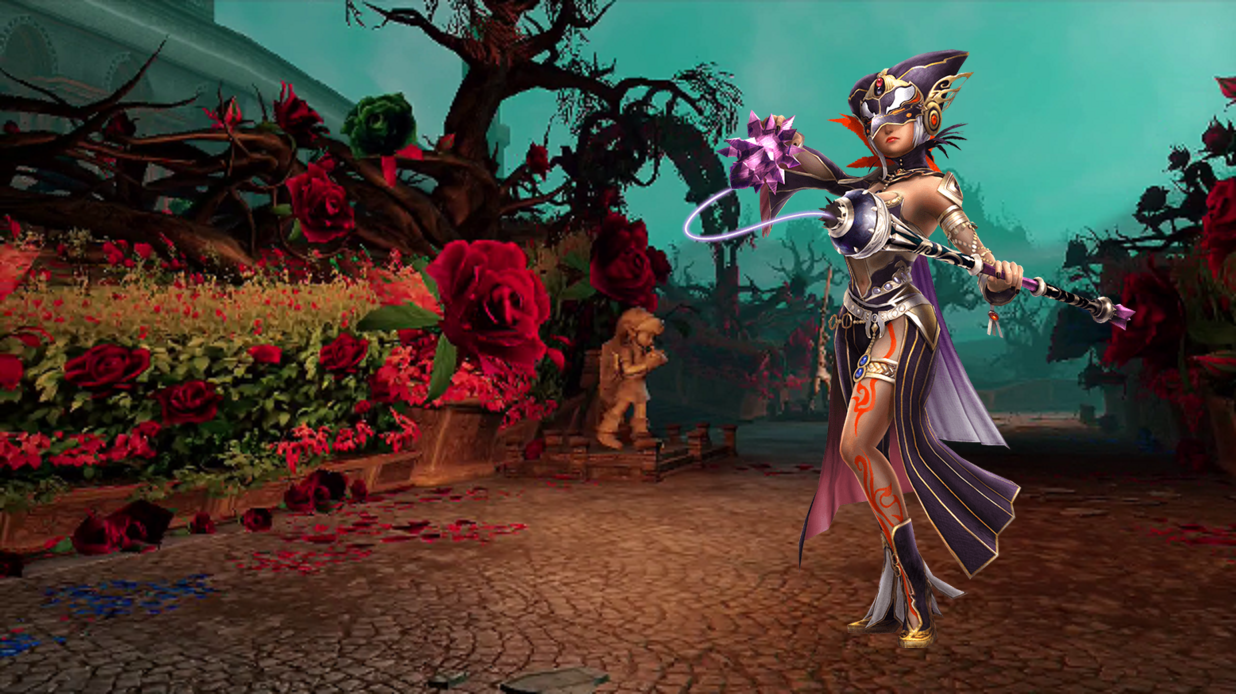 This just brings me back to my original title here, though. I don't think I'm ever going to 100% this game, but I'm certainly enjoying trying. I think what really makes it work for me is that the Adventure Mode stages (which is what the majority of the gameplay will be) are pretty short, stages are designed to be cleared within 15 minutes when you do well, so even in a short spurt of time you can knock out one or two and come back later. Taking breaks to play other stuff also helps. But there is just so much to do, so many weapons to collect and so many characters to level, its certainly a game worth the cost I've paid for it, and I say that as the crazy person who's sunk lots of time into every version of it.

One thing that's kinda neat is that the community has put together a huge informative spreadsheet while I looked up while helping a streamer friend. What I didn't expect when looking at it is that I'm listed in the credits! When the Lorule DLC was new on 3DS I farmed some stages and recorded some Food locations, and posted to GameFaqs, and I guess that when they were gathering information I was the only source for that particular gem.

Anyway, I know there was a pretty long running thread for Hyrule Warriors on the old forum, and I'm still playing it a ton, so here we go!

Whenever I prune the content on my Switch memory card, there are a handful of titles I never consider cutting. Hyrule Warriors tops that list. It has to be the Nintendo game I’ve played the most, across its various incarnations, over the last 6 years.

And no, I’ll never ever ever get even half of it completed

On 3DS I was pretty close to having 'master weapons' for every one. It'll be a long time before I get that close on the Switch.

Staff member
In my Hyrule Warriors Definitive Edition save file, I have found every heart piece and skulltula. I have unlocked every weapon. I have every warrior over level 100, and one at level 255. I have gotten rank A on every mission in Adventure Mode. I have maxed out every warrior's skill board. The only medal I haven't unlocked is the one for getting every spell on a single fairy.

This weekend, I thought about playing it some more. The only thing that can make me stop, at this point, would be a sequel.

Oh, I'd love a sequel. There are so many obscure characters that would be amazing to play. Groose! The weird magic-giving bat! Purah! Hilda!

Since I'm playing this so much lately I'm gonna share my accomplishments here.

Like today, where despite having had the prerequisites done months ago, I finally got around do doing the grind to unlock Evil's Bane 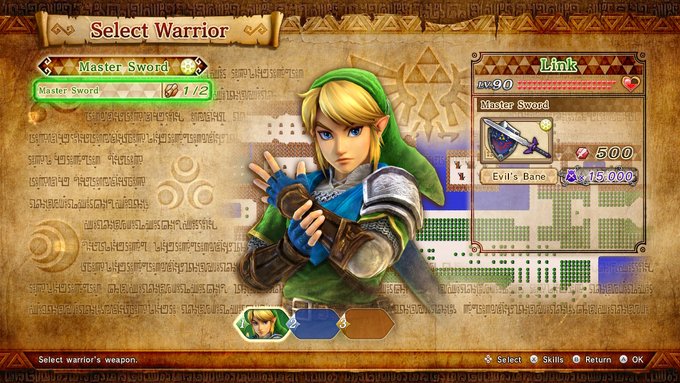 I still think it's a crime that Groose never made the cut.

Game's great besides that blemish though.

This game might not be the only one I've ever triple-dipped on, but it's definitely the only one I bought three times in a 5 year period. This game somehow never gets old. And I manage to learn something new each time I pick it back up, like how Volga is secretly awesome (but I still like Skull Kid better).
I'm down to about a dozen unacquired weapons, but still need like 80% of the skulltulas, and who even knows how many heart containers. 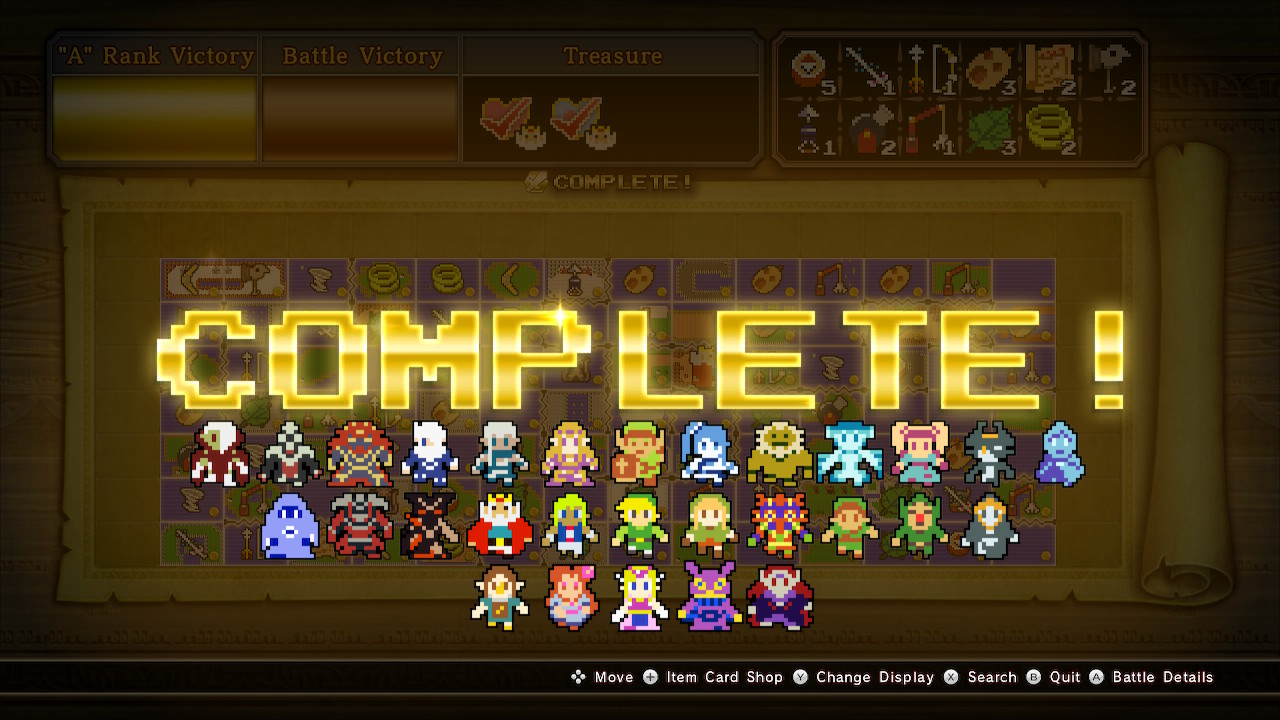 Thanks guys, you tempted me into getting the Switch version and giving it another go. I had the WiiU version and I also got pretty far into Fire Emblem Warriors when it came out.

If you only played the Wii U version, then, oh yeah, the Switch version is practically a new game. The re-balancing of the Adventure Mode maps alone is a blessing.

Red Silvers said:
If you only played the Wii U version, then, oh yeah, the Switch version is practically a new game. The re-balancing of the Adventure Mode maps alone is a blessing.
Click to expand...

Oh geez, I remember, on the Wii U, spending a week+ doing the stage that unlocks Ruto's Lv3 weapon 3-4 times a night until I finally managed to A-rank it. In that version, getting an A for damage taken meant losing less than 3 hearts, regardless of how much life you had. (Also: no fairies!)
I can't be too mad about it though? It was the only adventure map in the base game, so the alternative was clearing the whole thing quickly and running out of content. With all the DLC maps included in later versions, clearing the base map meant you were still just getting started.

I love this game. It's absolutely awful. I can't stop playing it. It sucks. I think I'm gonna play it right now.

infinity got my back

Bongo said:
This weekend, I thought about playing it some more. The only thing that can make me stop, at this point, would be a sequel.
Click to expand...

Bongo I have some bad news.

This one appears to be... canon?

I'm torn because I love the ideal of a sequel but I sure hope there's more than just six playable characters.

Staff member
We've got a thread about it already. I'd bet cash money that there will be more than six warriors.

I really only ever played as four characters in the first one anyway, so that’s still a surplus to requirements

Going back to the Switch version of the original Hyrule Warriors, last night I got the final 4+ weapon I was missing (and thus all the weapons in the game): The 4+ Horse for Link.

Octopus Prime said:
I really only ever played as four characters in the first one anyway, so that’s still a surplus to requirements
Click to expand...

Link because he was the highest leveled and had the strongest Weapon from the campaign, and continuing to use him just made that gulf wider.

Linkle and Ganon are both just really fun to use.

I submit for your consideration: Skull Kid. He has eye lasers! And they're probably the best attack in the game? They have great range, deal above-average damage, and sweep to form an ~90° arc in front of him. Or, you can rotate him during the sweep and cover up to like 270° if you do it right. (It's also not his only good move, though unlike Twili Midna he does have some real duds too).


Octopus Prime said:
Linkle and Ganon are both just really fun to use.
Click to expand...

This is some pure grade-A truth.

In my current play through Marin has been a beast to take through levels.

Now that I finished unlocking all the Level 4+ weapons, that means the 15,000 KO skill on the Master Sword was unlocked, and that means... 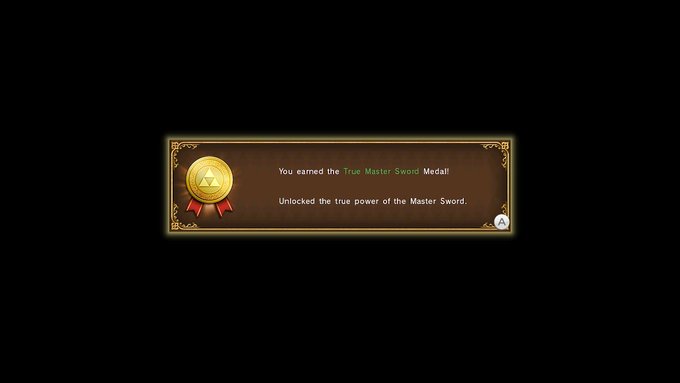 This one's a bit easy because of a level in Lorule where you can just sit someone and slaughter mooks constantly while Summoners summon them to you. Only took two runs in the stage to get the 15000 kills.

I love Young Link. His Oni firm gimmick is amazing. Twili Midna is a huge favourite too. I completely adore Impa and her design, it's a shame we're unlikely to see it again.