It's Purah and Robbie! 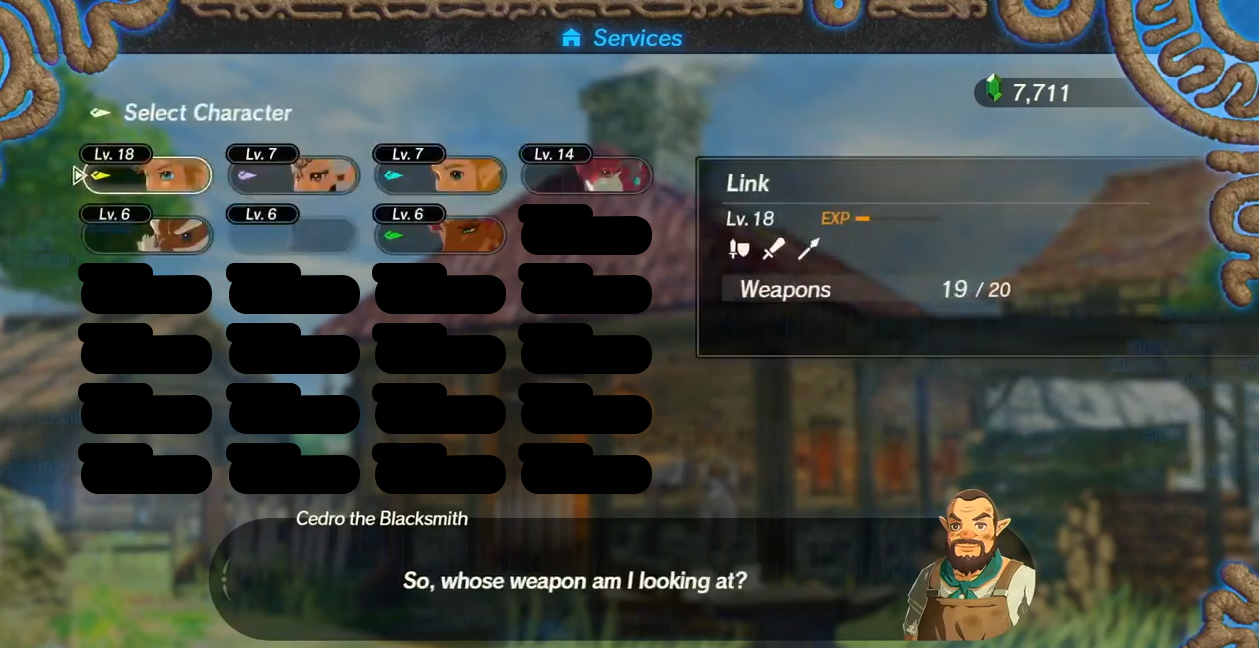 Interesting that Impa is the second slot rather than the third, I think?

Also, Revali isn’t shown at all.

i feel like the future champions will be bonus, clone characters tbh?

Revali is just a clone of Fox.

Zelda looks incredibly fun to play. I cannot wait to mow down armies with my smartphone of doom.

Wait... I just checked that part of the video (9:35 or so) and the only character that's present but not available is Revali. I guess this is a mockup of how many character icons *could* fit in the available menu? That seems like a bit of a reach? I mean that could be totally accurate, with the portraits sized to fit that space; but I don't see any reason it couldn't also be more (say with a scrolling list) or (more likely, really) less.

This is a Musou game so I'm sure it'll find some ways to shoehorn in as many characters as it can. Post-Calamity scenarios, time travel or dimensional shenanigans, non-canon dream scenarios, whatever.

Musou lives and breathes on how many crazy characters with interesting methods of attack it can cram into the playable roster.

Kairu said:
Wait... I just checked that part of the video (9:35 or so) and the only character that's present but not available is Revali.
Click to expand...

Possibly just had nothing craftable at that point

We have Link, Zelda, the Champions, Impa, Robbie, and Purah confirmed. King Roahm Hyrule is probably also playable - they already have a model for him after all. Most of the Zora were alive then too so King Dorephan and even kid Prince Sidon are potentially playable. Robbie's former crush Cherry and Kass' Shiekah mentor are also potentially available to be playable characters. I would also not be surprised to potentially see some brand new Rito, Goron and Geurdo characters that are playable, given we already have three Sheikah confirmed.

Given it's a musou, I would not be surprised if there's a playable version of Ganon of some sort, a Yiga clan warrior (already known or not), and likely some kind of Lynel. And probably a Great Fairy.

I am already curious exactly how they will inevitably adapt Tingle to the BotW multiverse.

At least give us Beedle's ancestor who is also named Beedle and is a carbon copy of Beedle.

New character teased at the end of this trailer.

Kinda of disappointed that the leader of the Yiga clan is going to be goofy. I assume it was inevitable with BotW being the base for everything, but I thought it was a neat bit of world building that everything in BotW's world is in such a state of decay, that Master Kohga, the leader of the most human bad guys has become... ineffectual in the current generation. According to what I remember of the lore, these were the guys that were always trying to kill Zelda from day one, and wiped out the last vestiges of hope for Hyrule after Link and Zelda disappeared. The fact that the "modern" leader is a goofball fits with the kind of laziness that comes from a victory, but Yiga always having been lead by someone that is basically BlazBlue's Bang seems to imply the heroes were always doomed to fail.

I dunno, just generally seems like a disappointment here from a lore perspective. He'll probably be fun to play as/fight.

Staff member
It looks like Original the Character there is the real power, not Kohga.

The fact that we only got to see glimpses of the past heroes and society of the pre-Calamity world gave them a lot more weight and made their lose feel greater. I don’t like this idea very much.

The Yiga always seemed just goofy in general to me. I mean they appeared to have some kind of banana addiction.

New character teased at the end of this trailer.
Click to expand...

Becksworth said:
The Yiga always seemed just goofy in general to me. I mean they appeared to have some kind of banana addiction.
Click to expand...

Looks a bit more like Vaati to me. Agahnim has an eye motif without a tail that served as the basis for both the Sheikah and Yiga emblems, but he's rather stout and wore bright, warm colors. Vaati has the red forehead gem and the generally purple color scheme. But I think it's more likely to be someone new.
You must log in or register to reply here.
Share:
Facebook Twitter Reddit Pinterest Tumblr WhatsApp Email Link
Top