I’m mean, the trailer was like 95% cutscene. I’m reserving my judgement on how the gameplay handles the tone of the setting until I’ve actually seen more than 10 fragmented seconds of it.

BEAT said:
Okay, before I start, I'm gonna get this this out of the way first. YES I remember the memory where Link is implied to have killed a shit ton of Enemies including a Lynel offscreen. NO that does not "fix" my concern. My concern cannot be fixed by a single shot of Link and Zelda surrounded by dead things. Do not point as that scene and go "BUT WHAT ABOUT" because I'M NOT HAVING THAT SHIT.

A Muso is the worst possible way to expand upon BOTW's past.

Muso's are games where you are inevitably a king shit badass who can send everyone flying effortlessly. That's not criticism or critique, that's a fucking DESCRIPTION OF THE GENRE. Musos are designed with that concept firmly in mind! You don't loses in a muso by running out of health and dying! You in Musos because the bossmonster jumped into the keep waaay on the other side of the map and turned it red before you could finish running over there. Musos are games where you start as an overpowered force of nature, and end as a level 99 godmonster.

How the fuck are they gonna apply that to a story that necessarily has to end with everybody dying?

More specifically, how the fuck are they gonna apply that to Link's story, which ends with him not dying in a glorious duel against the single avatar of all evil, but with him just getting shot and stabbed too many times while Zelda tries and fails to do the important thing until he runs out of blood and keels over.

That would never fucking happen in a Muso! As long as you got the Spin attack button, you're NEVER gonna fail in a muso!

Start out with a big character select screen and have it get progressively smaller as everyone gets murdered, until the last chapters where Ganon is sealed in the castle and they take Link's body to the resurrection shrine

Okay, but can we all agree that Ninty missed a trick by not calling it Hyrule Warriors II: Electric Chuchuloo?

WisteriaHysteria said:
What I know that Musou games are capable of, is handling a traditional, linear narrative better than BotW did. Which is honestly a pretty low bar to clear.
Click to expand...

Is there even a bar? BotW doesn't really have a traditional, linear narrative at all.

Droewyn said:
Okay, but can we all agree that Ninty missed a trick by not calling it Hyrule Warriors II: Electric Chuchuloo?
Click to expand...

Hell yes we can

Bongo said:
You can play as Cao Cao at the Battle of Red Cliffs, which was a catastrophic and humiliating defeat for him.
Click to expand...

Droewyn said:
Okay, but can we all agree that Ninty missed a trick by not calling it Hyrule Warriors II: Electric Chuchuloo?
Click to expand...

scrambling for the phone "Doug!! Stop the presses!!"

So maybe a "only BOTW" storyline doesn't super appeal to me, but lets be honest, I'm getting this.

Regulus said:
Is there even a bar? BotW doesn't really have a traditional, linear narrative at all.
Click to expand...

BEAT said:
THROW A ROCK THROUGH HIS WINDOW AND SHOUT "U UP?" WHEN HE COMES TO SEE WHAT'S GOING ON.

HE'D HAVE TOTALLY GONE FOR IT. HW ZELDA AND HIM AREN'T EVEN DATING.
Click to expand...

Missed opportunity to have them texting on a Sheikah tablet.

I think it's doable... you just have to make sure you're using the right enemies at the right times.

Like, you shouldn't be sending a half-dozen Guardians flying, but Bokoblins? With a Link in his prime and presumably using the Master Sword? I can see it.

Save the Guardians and Lynels and big guns for the end of the game, when you might have a bit more trouble. 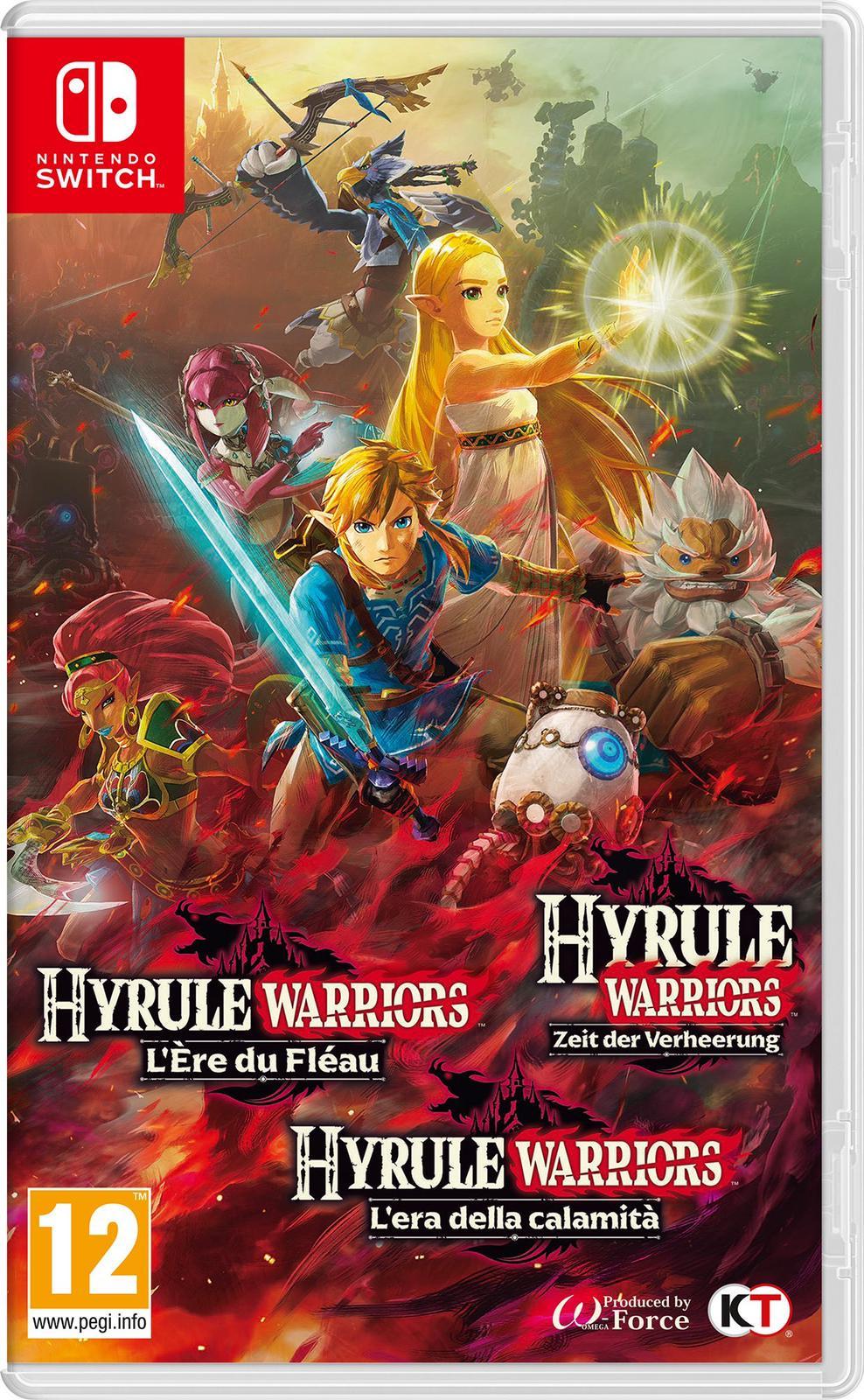 Hooray, no English on that so us Brits should at least get a decent cover. Sorry everyone else in the EU!
Yes I know we aren't in the EU anymore, thanks idiots

Couldn’t they just put all three subtitles under the same logo?

I would like to imagine the German team demanding a line break after "Hyrule" in order to localize it for their line-break loving market that will not accept "Hyrule" and "Warriors" on one line above the German subtitle for important cultural reasons, and then the French or Italian team saying, "well, if they get their own whole logo, we want our own too," and ending up with this.

From what I’ve later gathered, that is not real, but just a joke image poking fun at Nintendo Iberica, whose apparently done similar things in the past for the Spanish and Portuguese markets (can someone from Europe confirm this?)

Quick, someone draw Angry Kirby eyes on it

MatPat: "Hyrule Warriors should be canon and come before BoTW."
Nintendo: "Hold my beer."

I honestly can't comprehend how, with a timeline as convoluted and at times nonsensical as Zelda's, that one can point to Hyrule Warriors alone and say "...but that one doesn't fit, so it's noncanon."

Staff member
Moderator
...The Minish Cap, Four Swords, and Four Swords Adventure are effectively in their own universe, if you want to get into it...

I'm late to this party but I'm TOTALLY INTO IT!

Owned the original on both Wii-U and Switch. I'm a big fan of LoZ and still have the BotW Sheika Slate Carrying Case for my switch. Big Warriors fan, ever since renting Dynasty Warriors 3 from Blockbuster Video. Essentially it's the marriage of two of my favorite franchises in video game history? And now it's getting a sequel? I almost died.
I kinda stopped playing Hyrule Warriors because everything left I had to do was kinda rough, but it's still gotta be my favorite Warriors game. Actually, during the final semester of my thesis defense, I would play random maps in order to cool off after a hard day of writing. I had just gotten Octopath Traveler, but that game was too brain-burny for me with how much stress I was having. I had barely started that game before I had to toss it over my shoulder as I did "700 KO" missions night after night after night.

I hope the AI is as easy to give specific commands to as in Fire Emblem Warriors, because that game had some good stuff, other than the horrifyingly low number of move sets. That's really the only thing I think they could do as some sort of "advancement" on what's already one of the best Warriors games. (I like the Pirate Warriors games but the Kizuna system would feel weird here)

Kishi said:
...The Minish Cap, Four Swords, and Four Swords Adventure are effectively in their own universe, if you want to get into it...
Click to expand...

And all of which were not directly referenced in Hyrule Warriors, oddly enough.

JaikuRirishii said:
I hope the AI is as easy to give specific commands to as in Fire Emblem Warriors, because that game had some good stuff, other than the horrifyingly low number of move sets. That's really the only thing I think they could do as some sort of "advancement" on what's already one of the best Warriors games. (I like the Pirate Warriors games but the Kizuna system would feel weird here)
Click to expand...

I find Fire Emblem Warriors far more satisfying and compelling to play, the downside being that it’s far duller than the joyful weirdness of Hyrule Warriors. Here’s hoping AoC can bridge that gap.

I think the weapon triangle is a big part of what made the AI in FEW so useful, maybe they can expand on the elemental system here?

This game's announcement finally pushed me into playing Breath of the Wild. I do enjoy me some Musou. I owned Hyrule Warriors on the WiiU but never got any of the re-releases and honestly didn't play it all that much. But I want this one I'm pretty sure!
You must log in or register to reply here.
Share:
Facebook Twitter Reddit Pinterest Tumblr WhatsApp Email Share Link
Top