Cards Back on the Table: Let’s Play Arcana - Seal of Rimsala

Very first battle, two Medusas spam me with Attribute 9 All (Scorching Tornado), knock out Teefa, and give me a Game Over. Let’s try that again!

Second try, I get to this treasure chest and realize I’m still sitting on a hoard of Return Rings. I dump a couple and feed the honey to Rooks.

Then I win that battle, Rooks gains a level, and Marid picks up a new spell.

Killer Bees don’t sounds as badass as Vampire Bees, but they cast Sleep All, which can be a big problem.

Levels for Teefa and Darwin. I don’t know if I really was supposed to have grinded more last chapter, or if the level curve was messed with as part of the hack.

Then some honey I immediately feed to Rooks.

The floors in this version of the tower are much shorter.

I think the theme here is “Stay or Go?”

I didn’t even get into a fight on the 2nd floor.

New to this floor are Beezlebubs, which have 200+ HP and cast Lightning 3.

More honey for Rooks. The Spirit Gauntlet is a minor upgrade for Teefa.

And that’s the 3rd floor. See what I mean about short?

An armor upgrade for Rooks. (At this point, I don’t care if Darwin can use it. Rooks matters more.)

At the 5th floor, the textures change. But we’re still fighting lots of Minotaurs.

More treasure that will be useful eventually. I try to knock out Medusas quickly after that first wipe.

Rooks gains a level on the 6th floor, and Sylph learns her ultimate spell, which is an instant-kill if it hits. I never actually cast it.

There was a Tent on the 7th floor, but I missed the screenshot.

And this is why we need to keep the party healed up.

The maps here are just these zig-zaggy straight lines with short side paths for treasure. It’s like Final Fantasy 13 here in Remorse Tower.

On the 9th Floor, we change textures again. 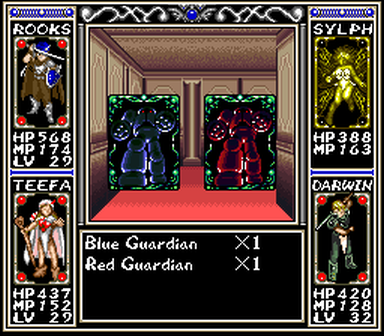 Looks like we’ve got trouble, in the form of recycled bosses. Everybody loves a good boss rush, right?

Except no, it’s Sarah and Axs to the rescue! (And hey, Axs was alive after all! …How the hell did he survive?) There’s no battle, we automatically rush past.

So we’ll fight this boss instead!

But rather than letting me fight the awesome dragon goddess, Darwin and Teefa split off as well.

This is actually fairly logical: Time is of the essence, and Rooks is the one who needs to reach the end and use his card-powers to seal Rimsala. Everything else is a distraction and everyone else is expendable.

Up on the final floor, Rooks faces his last challenge.

Rimsala tries to use her mental powers to get Rooks to revive her, which adds a new layer to Galneon and Alan’s actions. How much of their plans were even their own ideas to begin with?

Rooks is made of sterner stuff, so sealed Rimsala decides to get rid of him.

Rimsala, still partially sealed, isn’t so bad. I rotate through spirits to buff Rooks, and I have him toss Attack Impair and Defense Impair before I lay into her. 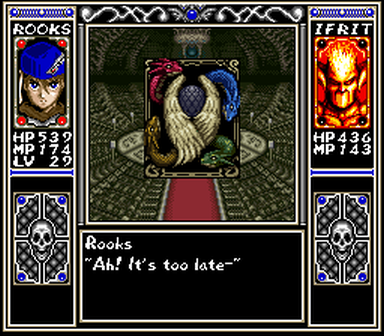 And Rimsala is fully revived.

Rooks’ ancestor to the rescue! The two swords and the jewel combine into one sword! (Which nothing ever indicated they could do.)

We’re restored and thrust back into battle. The weapon is automatically equipped, it’s called the Armageddon II, and it’s the best weapon in the game.

Rimsala Unsealed will wreck your shit with Avatar Storm (Attribute 11 All). I do the same round-robin of spirits casting buff spells, because they can’t really heal enough to keep up with the damage and they can’t do real damage to Rimsala. (Rooks can do around 180 per hit with Defense Impair and Stomp All both active). Then I just need to time my applications of Heal 3 with the occasional Gold Flask.
The spirits’ role in this battle ended up being pleasantly thematic: They were there to support Rooks (with buff spells and healing magic) and act as meat shields for him.

Rooks casts the sealing spell again, and this time it works. (I successfully captured the lightning in the Rimsalas shots, but not around the Tower…again.)

We’re treated to a text-only epilogue that nonetheless leaves questions. Did all of the companions survive? Do Sarah and Teefa share the throne? What about the skirmishes with the other five countries?

But at least for now, the land is safe.

I have a lot of nitpicks about this game, in retrospect.

Plot-wise: Teefa was clearly working with Alan from the beginning, but it’s not clear when Galneon decided he needed to mind control her as well. Her actions in the last chapter might imply that she was never willingly working with the bad guys. That calls into question how the mind control works: If beating her up cancels it, why risk having her fight alongside Rooks? If Galneon deliberately let it expire in Chapter 4, why? Why not have her fight Darwin and Rooks to the death?

For that matter, why did Alan kidnap Sarah? If he had Teefa working with him the whole time, he didn’t need Sarah to get the Enchanted Jewel from the Ice Cave (and even if he needed her to reveal its location, he certainly didn’t need to drag her down there where she could get rescued).

When Galneon pulled his coup, the King entrusted Axs to care for Sarah, and Darwin to care for Teefa. One of these people did a better job than the other.

There’s an error in the hack (see my second post) when Alan reveals his evil plan at the end of chapter 1: He refers to “all seven countries”; there are only six.

Daram or Baram is apparently masquerading as the earth spirit Dao for several floors of Remorse Tower and nobody notices that. As the Archive LP of the original game notes, "So his entire plan was to get beaten, pretend to be the Earth Spirit, and then announce himself and get into another fight after you'd picked up more help? That's..." "Completely stupid, yes."

Honestly, Galneon has a “He’s just crazy” villain problem. Alan wants to control Rimsala and use her powers to conquer Elemen (and rule it as a utopian society), which is a Bad Plan but you can at least see where his motivations came from. Galneon speaks all his onscreen time cackling like the Joker and taunting the one guy who can foil his plans, rather than killing him.

System-wise: The Cards command is woefully underpowered by the fact that you can only carry 9 of each card, they cost money that’s trivial in the endgame but significant in the first chapter, and you need to use three to have a meaningful effect. Rooks can cast his “Fire 3” equivalent three times per dungeon run, and it’s scarcely more powerful than his regular attack by midgame.

Equipment is rather unbalanced—in the early chapters, it’s hard to tell what’s worth buying (even if you check the manual, that doesn’t tell you elemental affinities); and in the later chapters, you can find much better equipment for your companions than you can buy. Apparently some equipment in the late-game can be used to cast spells, but I never figured out how to do that.

The fact that people leave their equipment behind when they leave your party is mitigated by the fact they all show up naked. And you’ll recall, the death of any human character is a Game Over, so you can’t just let Darwin die and drag his corpse around the dungeon. The hack tries to mitigate that by providing useful equipment for each character in chests shortly after you get them, but without a map and/or magical foresight, that’s not actually useful. I suppose it adds a layer of complication and playtime to the game if you have to carefully map every corner, but I don’t find that fun.

As I noted in an earlier post, the fact that this is a first-person dungeon crawler without any of the elements that make that challenging (besides battles that wear you down) makes the meat of the game rather tedious. There are big open areas with nothing in them; and long corridors with zig-zags that just exist to take up space.

Overall, this is one of those games that occupies a space in my brain because it was a SNES rpg that had a quirkiness to it; but I’m not sure how well it holds up in retrospect. Maybe I’ll play through it again in another 20 years.

I’d like to thank the original creators of the game, the writers at Nintendo Power, and hacker Sarah Shinespark for making all the things I’ve been showing off. And many thanks, as usual, to the good folks at Talking Time for making this a great place to hang out.

This has been Arcana: Seal of Rimsala. Thank you for joining me; see you next time!

Staff member
Moderator
So it may or may not be an actually good game, but it's still very stylish. I admired it in Nintendo Power decades ago, and I still admire it through the lens of your LP.

Also, all of the battle music in this game is really good.

Mogri said:
So it may or may not be an actually good game, but it's still very stylish. I admired it in Nintendo Power decades ago, and I still admire it through the lens of your LP.

Also, all of the battle music in this game is really good.
Click to expand...

Agreed on all counts, the music especially. I'm pretty sure the final boss theme cleaned house in a thunderdome years ago, actually.

Thanks for running this LP, Beowulf!

Thanks for the LP! I really like that your party members handle the boss rush, as you said. It's a cute game and I do feel the card system could be expanded - maybe to something resembling Atelier Iris' mana and alchemy system for instance, which is a type of system I'm always fascinated by.

I enjoyed it. This was a game that fascinated me when I saw it in Nintendo Power (or other game magazines) back when it was first released. But even though I liked RPGs I never bought it and had never played it. It was nice to experience it vicariously.

An ending mostly just being text on a black screen is something I'd expect from a platformer or action game, but for an RPG that sure is a disappointing ending. "Time passed, hope returned, here's some fancier pixel art of the game world. Roll credits."

I'm not gonna say no other 90s RPGs did this, but endings usually went a li'l farther than "A winner is you." This is kinda thing I'd expect from Final Fantasy 1, not a second year Super Famicom game.

Isn't this one done?

Ack! You're right. That's what I get for not letting all the posts load! Apologies!
K

The Attribute spells actually have proper names in Japanese. I'll list them here, along with my rough translations.