But I want hi-def creepy dancing clay dolls for my photo shoots.

I'd be more into them if there was like a wing of the museum for them... though I do miss the one that would be stationed outside each player's house in the original.

There's a few additional things coming with the update according to this article:

Before Pavé arrives, players will also get Valentine’s Day-themed goods. Chocolate hearts and heart-shaped bouquets will be available from the Nook Stop and through Nook Shopping Feb. 1-14. Other holiday events coming in January and February include Groundhog Day and Big Game Celebration.
Click to expand...

The second I read "Big Game Celebration" my brain imagined an owl mascot for the holiday who says everything is superb. Now I'm just going to be disappointed.

I really don’t know what’s going on at ol‘ Tendo these days.

I really don’t know what’s going on at ol‘ Tendo these days.
Click to expand...

Pocket Camp is run by a different crew (DeNa plays a part in that), has microtransactions and subscriptions to keep the Bells flowing in after people get the game, and has a lower graphical threshold (i.e. 3DS game on steroids sans fancy texturing/lighting) to meet than New Horizons does.

I’m still jealous. My mom showed me her campsite lately and it’s bananas how much more cool stuff you get. At least NH doesn’t have fortune cookies...

R.R. Bigman said:
I’m still jealous. My mom showed me her campsite lately and it’s bananas how much more cool stuff you get. At least NH doesn’t have fortune cookies...
Click to expand...

Oh for sure. Back before the game locked me out with the 3rd anniversary's 64-bit CPU/OS requirement for the big AR update/camp expansion, a big reason I played it regularly (besides the slow spells in New Horizons) was that there's tons of cool furniture and I am really into decorating in Animal Crossing games.

R.R. Bigman said:
I’m still jealous. My mom showed me her campsite lately and it’s bananas how much more cool stuff you get. At least NH doesn’t have fortune cookies...
Click to expand...

My wife, who played New Leaf constantly up until New Horizons launched, played New Horizons for maybe 3-4 months before stopping and pretty much exclusively playing Pocket Camp these days. Variety of items was one of the biggest reasons. Others were things like how many items/clothing from previous games were left out, which in turn led to so many animals not having what she considers "their" default outfits that they should have and the changes to some of the personalities. Like, the lazy type getting sort of gross/filthy lazy or the jock type being a little too jock and less just "sporty". In short, the game just felt kind of barren after a bit and the animals weren't all ones she felt like spending virtual time with. The updates (which I've kept an eye on since we both stopped playing) just continue to be things or variations on things the other games had when they arrived.

It's a shame, because I like much of what they added... but so much feels like it was lost. Anyway, she's got Pocket Camp and no signs of slowing down there.

I don't need everything that was in New Leaf and Happy Home Designer, but I can certainly relate to missing things from previous games.

I chalk up a lot of the missing stuff to the growing pains of the art shift. The Animal Crossing series was able to have such a huge load of furniture in previous games 'cuz it reused a lot of assets that had been around for over a decade. City Folk upgraded the Wild World furniture to be rounder while adding its own stuff, and New Leaf, Happy Home Designer, and Pocket Camp built upon those foundations.

New Horizons is a huge graphical update for the series with amazing-looking swag (and animal friends), but that added level of detail does come at a cost. It's not just about porting 12-year old assets with a few tweaks and texture changes anymore, stuff has to be made with a higher poly count and designed to look appropriately wooden or rocky or metally depending on the designs or variations available. And all of those also have to look right in a more dynamic lighting system.

Don't get me wrong - I 100% understand WHY this shift happened. But at the same time, the justification for it doesn't change how I feel about the game. I can't NOT compare it to the previous iterations.

Also, not begrudging anyone who is enjoying themselves or trying to ruin their fun. Just expressing an opinion/experience. Maybe someday when the game is done updating we might go back to it and see if it's rounded out enough for us.

Serious question: What megaphones* y'all got in your seasonal shops? It looks like there are different kinda of Big Game Celebration megaphones.

* Mine is Glittery cheer megaphone.

Celeste is around near Skye's. If you don't have the Aquarius urn recipe yet, now's your chance!

Huh. Looks like the megaphone you can order from the Seasonal section changes each day. Got Football cheer megaphone today.

I sent you a fiery one.

Redd is here in Procyon with a real Flowery painting, and there are real Dynamic and Twinkling paintings in the area by the airport. I need to head to a doctor appointment but will leave the system on while I'm gone.

Just realized I had a bunch of friend requests I hadn't noticed, sorry if anyone tried to visit yesterday and couldn't.

I recognized all of them but a profile named Lois, if that's someone on here could you please PM me so I know who it is? Thank you!

Here's a stupid question: When Sable gives me a new custom pattern, where does it... go? It's not in my pockets and it's not on my custom design app. She's given me three so far and I'm worried they're just disappearing into the void. I'm sure there's something obvious I'm overlooking.

They're not in your custom design app, they're additional texture options that you will have when customizing certain things like bedding and simple wall panels. They have their own section when you customize those things.

Is there any good community sites any one here would recommend to browse artist creations for clothes and other things? An example would be the incredibly well-done freckles and brows combo my resident representative is just part of her any more.

I like the ingame tools to browse designs, but I'm missing the options I had online with New Leaf. Including Japanese sites.

Heavy meteor shower and Celeste is here on the 3rd level in the upper left of the map (bring a ladder). Dodo code is 9RR9S.

Also one of the fancy screens is at Nook's.

Working on a secret gay nightclub in the mountains behind my house, because that's an extremely normal thing to do 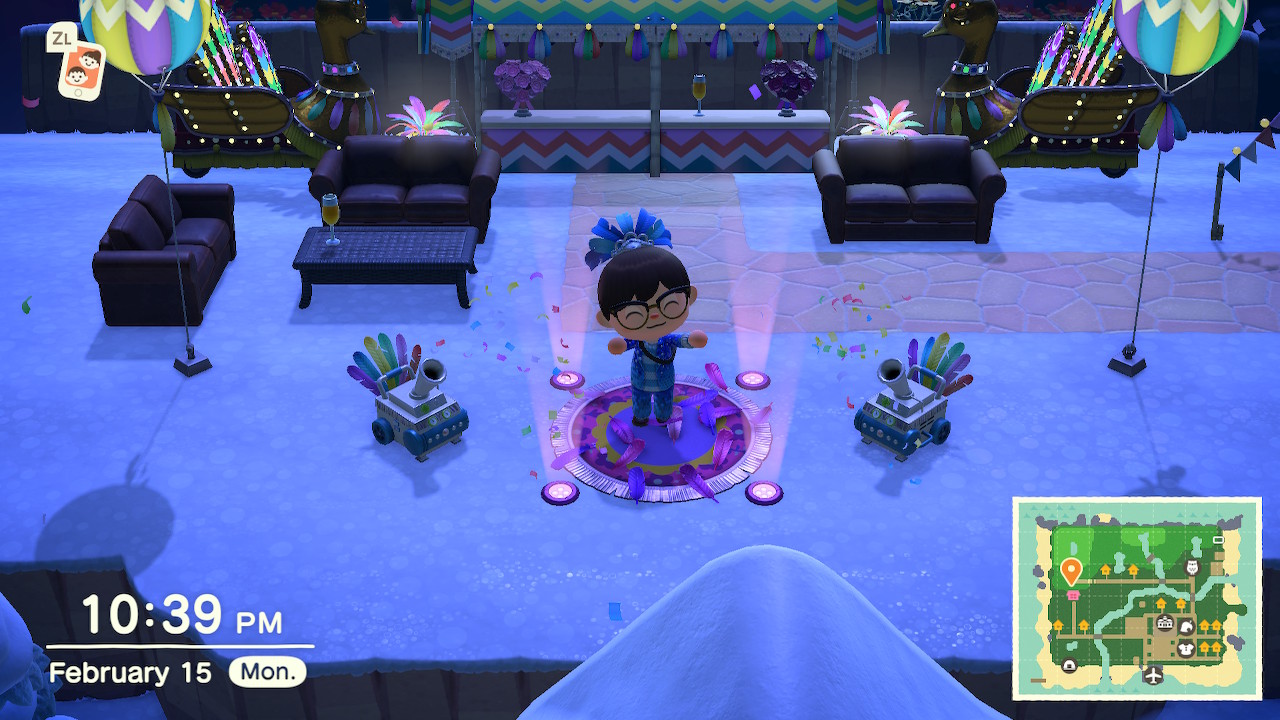 Anyone have a spare rainbow Festivale Garland you don't want? I have a rainbow Drum I can trade you, or if you want Bells that'd work too. Thanks!
EDIT: Got one!
Last edited: Feb 16, 2021

I thought I did, but I don't. Just a red, blue, and green garland, sadly.

Vaeran said:
Working on a secret gay nightclub in the mountains behind my house, because that's an extremely normal thing to do

Anyone have a spare rainbow Festivale Garland you don't want? I have a rainbow Drum I can trade you, or if you want Bells that'd work too. Thanks!
EDIT: Got one!
Click to expand...

The couches are somehow perfect and I can't articulate why.

Fabulous. I want to visit this nightclub.

So glad I remembered (or rather, saw someone post and was reminded) that Festivale was yesterday so I could login and experience the experience that is Pavé! And I got some fancy stuff that will sit on my island until the next holiday when I log in for a little bit. D:

I am loving that Festivale float.