30 for 50: Celebrating Five Years of Listings

In just over half a decade, Top 50 threads have become an integral part of Talking Time, and we've had exactly 30 of them! They were all excellent, too, and have encompassed a wide variety of topics, from games to comics to mythical critters (and surprisingly, only a third of them have been vidjyagame related).

So let's take a look back at the lists of things Talking Time likes best. I will be posting an entry from one list each day for the next thirty days. Said entry was handpicked by the list runner as the one they wanted to represent said list. If the list runner did not answer my PM, I chose an entry myself at my own discretion. So if anyone doesn't like the entry I picked from their list, they have no one to blame but themselves (although if you PM me your choices before I get to that list and before August 30th, the day before the old forums close, I'll do that one).

So with what subject did a tradition with such a rich, storied history begin? I'm glad you asked... 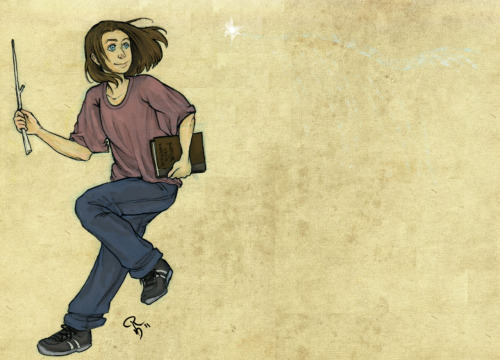 From the History of Magicks
Nita Callahan is the lead in the Young Wizards book series. Juanita "Nita" Louise Callahan begins the series in junior high school as a typical "book-nerd" who is often bullied by stronger girls. As the series goes on, she deals with such issues as parents, romance, death, sex, and social bullying. She lives at home with her parents and her genius kid sister Dairine. She is often called "Neets." She loves horse books and listens to Journey (band) (according to High Wizardry). Her wizardly specialty initially seems to be the art of dealing with plants and the living world (sometimes referred to as organic wizardry), but later on shifts more toward wizardly theory and manipulation of kernels - cores of energy found at the center of every person, planet and universe that act as replicable centers for major wizardries. Recent events have suggested that Nita may be switching specialties again, this time into precognition and oracular dreaming, also developing a connection with water.
Click to expand...

This was two years before I joined TT! I'll have to think about who I would even pick in 2015, haha.

Psyched for this trip down memory lane, and I'll try to get back to you with some pics from my two lists before the deadline still...

I always meant to read through all the lists published before I joined, but I never got through 'em all, so I'm excited to see these capsules!

Honestly I probably would have had Gandalf at #1 on my list because I'm a plebe like that. (I didn't start contributing until JRPGS).

I did have Gandalf at #1. What can I say, he's archetypal.

I have totally stolen adopted this format at another forum I frequent, and it's drawn quite a bit of enthusiasm. These lists are always interesting to me, because I think a lot of things that are people's second- and third-favorites and are underrepresented in your more traditional polls. They've definitely become a staple of my Talking Time experience.

I picked #50 because its the very first one. That's all. I kind of prefer that humble choice (no disrespect to the selected character) as opposed to the #1 on the list. I feel like on another list, chosing a meaningful or clever one would be the way to go but this felt right to me.

I don't know what would change on my own personal list if I was doing it today. Maybe a Dorohedoro character. Frankly, I was always disappointed Dr. Strange and Dr. Orpheus never made the top 50.

Beta, I myself stole this from the Rifftrax forum, so I think that's great. 
Samus Aran is the protagonist of Nintendo's Metroid series of games. Samus first appeared in 1986. She was hired to eliminate a base of Space Pirates who were hatching a race of deadly creatures known as 'Metroids,' intending to use them as deadly bio-weapons. Nothing was known about Samus before this point, the manual even refered to her as a 'he,' but players who won the game fast enough were treated to a shocking revelation; Samus revealed that she was, in fact, a woman- by stripping down to a bikini.

By eighties standards, this was progressive.

Samus has gone on to star in other games since then, almost always facing off against her archenemies, the Space Pirates, the space dragon Ridley, and the Metroids. In Metroid II: Return of Samus, she was tasked with annihilating the entire Metroid species. This turned out to be a bad idea. In Super Metroid, she would be tasked with recovering the last known Metroid from the Space Pirates.

Samus is brave, determined, and capable, and devastatingly well-armed. She is rarely seen without her trademark Varia Suit, which is equipped in various combinations with a Charge Beam, Wave Beam, Spazer, Ice Beam, Grapple Beam, dozens of missile rounds, bombs, super bombs, a High Jump module and a variety of other gear. She has a tendency to lose track of her stuff a lot, but not to worry; even when wearing nothing but the Zero Suit, Samus is still capable at tactical stealth, espionage, and survival. Samus is generally a serious and taciturn figure, very rarely speaking, and generally only to the player, rather than any characters around.

Although Metroid games were originally envisioned as 2D freeform platform games, Samus would eventually make the leap into 3D with the Metroid Prime series, which were re-imagined as ultimately very successful first person shooters, even if they lacked the charm of the 2D games.

There was another game called Metroid: Other M, but I'm not authorized to talk about it.
Click to expand...

I would have voted for Samus as my #2 if I were around for that list, haha. Most of mine would have been games related I think...with maybe 10 or so from movies...

There were a lot of games and anime, but Hester Prynne and Scout Finch also made the list.

Oh god I didn't even think of books. Fuck, my list would be wild. I think I should actually do that sometime now haha

This is a great idea. Thanks, Issun!

55 Points​
Traits
Ghost?
Robot?
Wizard?
ALL OF THE ABOVE!

Destil is a poster on the Return of Talking Time forums, and has been since July of 2007. As of this writing, he has posted 16,538 times. He is an equal mix of ghost, wizard and robot, and is thus eligible for entry on two of the three Talking Time Top 50 polls. Since finding out anything about him on Wikipedia is pretty unlikely, and he's not online right now for me to ask, I am going to just go ahead and make things up. But I don't want to get sued for libel, so they will all be aggrandizing.

Destil was played by James Gandolfini in the film based on the book
Click to expand...

Didn't even crack the mentions...

Heroines was the first list I took notice of...too late to participate. Ripley probably would have been my #1, but Kazooie, Lucca, Toph, and Samus would make it a tough choice. Also, I think it was that list that taught me what Steven Universe was, so that was cool (I would have reversed the order of the three main heroines had I voted).

Robots was the first one I participated in! I had just read Asimov's Robots books, and I was glad to help Daneel Olivaw just crack the top 50.
Last edited: Oct 27, 2020

I somehow missed this thread until now!

I forget most of the wizards that I voted for (although I remember feeling clever when I book-ended my list with Ika and Ruga), but that list was when I realized that pretty much no one on TT read the Malazan series, and it bummed me out. This would later be relevant for several more lists! Also, I remember dogs in wizard outfits making me laugh featuring at some point.

For the heroine list, I remember that the host, Solitayre, didn't know Steven Universe either and insisted that he didn't care about spoilers but those of us PM-ing him about it still really didn't want him to spoil himself.

I have no specific memories of the robot list, but with Octo hosting it was of course a fun time!

I always thought Destil was supposed to be a ghost dwarf.

Mmmph. Yes. Now we're getting to the good stuff. This game is my jam. I love every stupid horrible thing about it. Clunky controls, impossible dungeons, nonsensical story, everything. But it's just so unique you know? This game screams NES to me. It's the most NES. You just don't get bananas in the ears any other console.

I mean jeeze look at that guy on the right. Won't see that in a Sonic game. I think I may have read this list when I lurked at TT, so I guess this is the first one I followed!

I remember this one because that jerk Loki named the thread after my unironic vote for one of my favourite NES games. (*tries to find a toastybert emote*)

Anticipation rules! And its music slaps!

A list where Batman could have won, and did not. You have failed this city, tlaking time

I'd kind of like to see each popularity contest re-run once it's five years old. The TT demographic does change over time, not to mention new stories and new characters appearing, and it'd be really cool to see what changes time makes in classic lists.

Let's see, looking at my old notes, my top heroine was Avatar Korra, my top robot was (Atomic) Robo, and my top NES game was... the top NES game.

Gamera, Friend of All Children, is a daikaiju in his own series of tokusatsu films, separate from the Godzilla films. Generally speaking, Gamera is a really big turtle, except he can walk on two legs and has sharp teeth (which turtles don't have). Addtionally, he has two tusks from his lower jaw, and sharp claws.

In his earlier appearances, Gamera fed on fire, with flame breath to match. His shell was nearly impenetrable except from the repeated, heavy blows of the alien Guiron. Gamera can also fly by retracting his limbs and spinning his shell like a flying saucer. Basically, he's Bowser from Super Smash Bros., but without the spikes on the shell.

Wikipedia is relatively light on the events of his films, but fortunately, I don't have to outsource my research here! I'm going to point you all to blinkpen's thread about all of Gamera's films. Or at least a lot of them.
Click to expand...

Droewyn said:
I'd kind of like to see each popularity contest re-run once it's five years old. The TT demographic does change over time, not to mention new stories and new characters appearing, and it'd be really cool to see what changes time makes in classic lists.
Click to expand...

I don't know - I had a hard enough time coming up with a list once.

Torzelbaum said:
I don't know - I had a hard enough time coming up with a list once.
Click to expand...