108 HD Doodles in the Water Margin: They're Remastering Suikoden!

It's a Northern Continental breakfast!

Staff member
Moderator
I’m super happy. I think it looks great with the remade backgrounds that keep the aesthetic choices of the original games.

I hope this means remasters of the PS2 games are also on the table!

Lokii said:
I hope this means remasters of the PS2 games are also on the table!
Click to expand...

From your lips to Geddoe's ears.

We got new Junko Kawano art out of it, so however this all turns out, I'll consider it a net positive. She's been absurdly busy with this and Eiyuden running through their production in parallel.

World map looks a little rough, not FF6 mobile rough, but rough none the less. Maybe they can toss some textures on Gregminster Palace. 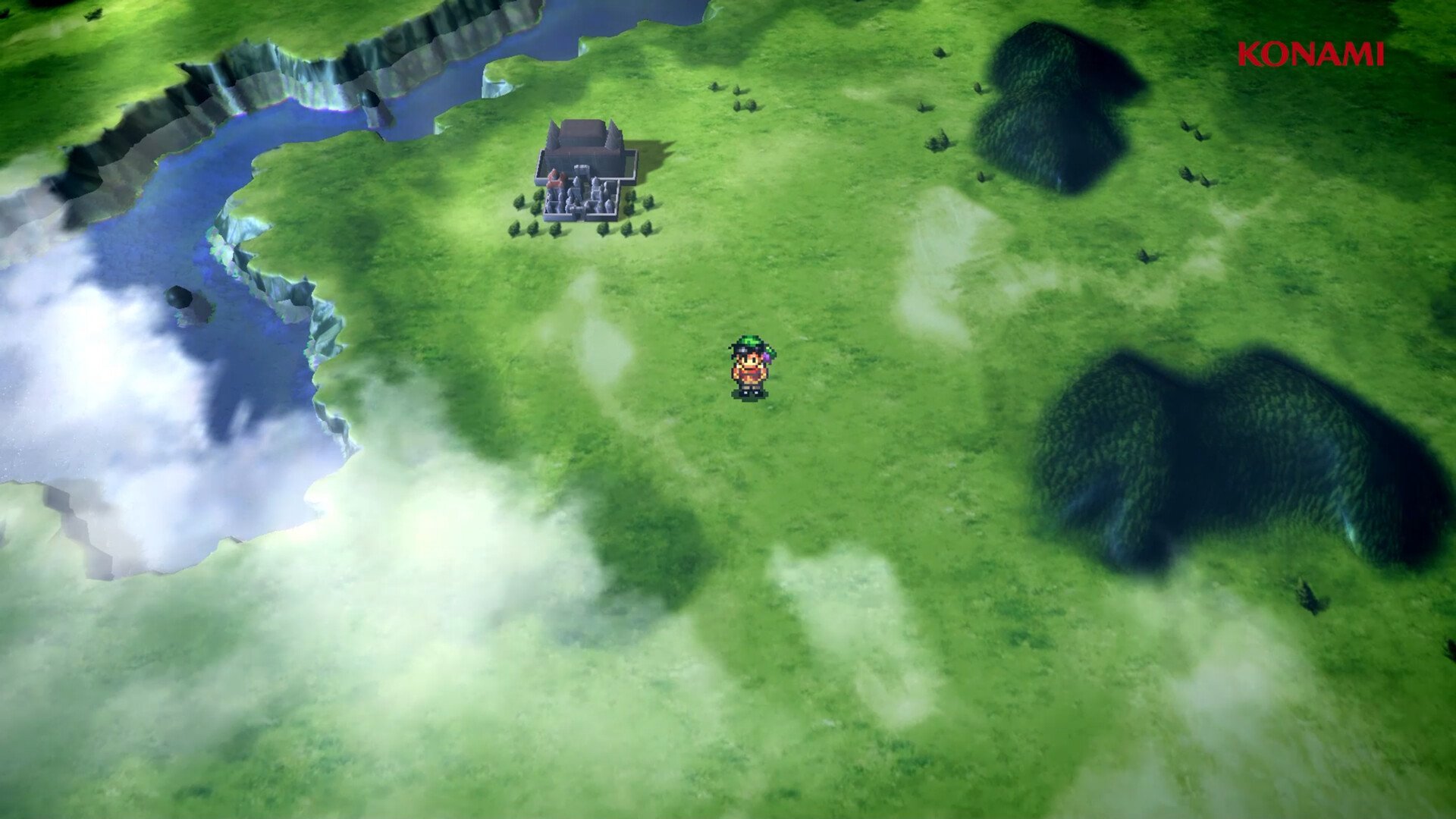 The overall visual effect they're going for (where they update the backgrounds but keep the sprites untouched like critically reviewed remaster Romancing SaGa 2) generally seems to be working a lot better for Suikoden 2 than Suikoden 1 because it's (A) already kind of what 2 was doing and (B) the sprite for 1 tend to have thicker outlines.

Actually blown away the chunky, pixelated pink damage numbers are present for Suikoden, considering how typefaces like that never survive remaster treatments, and how otherwise altered the rest of this is--II has less memorably characteristic fonts in battle and those didn't make it through. The aural SFX work is probably what's going to take the most to get used to with all the adjustments made to the soundscape, if these games are imprinted in one's marrow to any extent.

Oh whoops, we had two threads for this. Porting my post:


Part of me kinda hopes the glitches are still in for near infinite money and other things that make replays smoother, but since some depended on map sprites it seems unlikely. Though I also wonder if there’s any rebalancing or other updates, or if it’s a totally straight game port with BG and effect graphics upgrades only.
Click to expand...

I'll say what I said on Twitter: hot damn!

Having never played a Suikoden and having long felt the absence in my life, I'm definitely picking this up.

Very exciting news! I've always wanted to play the Suikoden games, so this will be a definite play for me.

I'm not normally a fan of changing the look in a remaster, but I think this looks pretty good for what it is; the new backgrounds don't really feel too out of place, and I'm glad they left the sprites as-is. But the actual big deal here is that it looks like the script has been improved. Unclear if it's a full retranslation or if the existing script got another editing pass, but either way there's some differences.

HELL YES
also those aren't new portraits, they're from the old character guides from eons ago.

Cool they're putting it to use, then. Kawano was on stage for the announcement, so the blessing has evidently been given. Murayama also seems cordial and supportive of the project even if he's not involved.

I saw this elsewhere and immediately booked it here to share in the joy.

I've personally played Suikoden 1 & 2 enough time in my life so far, so the chances of me getting this aren't great, but it's nice for Konami to finally recognize that Suikoden is an IP it owns.

I'm not enthusiastic about this at all. I really don't see the point of an "HD Remaster" here. Especially in II where the sprite work in that game - even all the overworld and backgrounds - still look spectacular. It's part of the game's entire charm.

If this existed alongside a straight port of the original game, or there's a toggle switch to the old graphics, or if Sony started letting us access our old PS1 Classics from back in the PS3 days on modern systems, I wouldn't mind this as much. But as it is, this is essentially replacing the old game since none of the older versions of these games are readily available anymore. That makes me sad.

The new 2D backgrounds look ok and not awful. The updated portrait art looks good, actually. The 3D backgrounds look generic and bad, like a bad mobile game. I think I could probably get used to it/excuse it eventually, but I noticed visible slowdown and frame drops during those moments. If it's going to run that poorly in their advertisement on a high res/power target device, I can only imagine how poorly optimized and shitty it'll play on say, the Switch. I think that bodes poorly for the quality of the game. The PSP port was infamously atrocious regarding bugs, some of which were game breaking.

I don't trust the hollowed out husk of Konami to handle this project well either. Their track record on these kinds of modern hd ports have been pretty poor as of late IIRC. So I'm going to be over here very skeptical of the entire thing and not going to let my blind love for these games (easy top5 of all time) get my hyped up prematurely.

I wish every remastered game came with the option that the Halo Complete game does. Where you can seamlessly go back and forth between the original and new graphics.

As someone who owns physical copies of both of these games. I have to say I am against this release. It hurts the value of my very real property!

monkey island did it best, with the seamless flip between og sprite and new art even mid animation.
that said, i love that they're reusing classic assets but in HD, and that they kept the fonts and shit.
It looks like they kept the actual sprite work intact for the games, as seen in this video.

It's akin to the Romancing SaGa remaster approach as mentioned above. I don't think it's an ill-fitting move, considering the best qualities of these games visually (portraits and character sprites) are being retained. Even II's increased eye for detail in painstakingly laid out pixels was offset by the majority of the environmental work having some element of digitized, muddy texture maps that exist far apart from hand-drawn minutiae. The glossy uprenders of the material don't make for a bad transition in that context in what they're adapting, for totally different displays than what the originals were made on and for.

Falselogic said:
As someone who owns physical copies of both of these games. I have to say I am against this release. It hurts the value of my very real property!
Click to expand...

Think of it this way: if the value of your copies of Suikoden I&II go down, then the values of Suikoden III-V will all probably go up as interest in the series goes up as well. A rising tide lifts all boats! (Also, these kinds of things have rarely hurt the value of classic games in the past for long.)

I'm really not a fan of the UI, text font, pre-rendered bgs, or the portraits there in S2. (S1 portraits look great.) I really just want a direct port. I don't think that's asking a lot.

On a tangent: whoever cut this video should be fed to the Beast Rune. That party-comp is ASS. And they named the MC "GENSO"!? Do they even know Suiko-canon!? /s

I will say, even through all my bitching: if they manage to update the localization of S2 so that it's halfway competent and legible, all will be forgiven.

Oh, to give a random bum some gold and have him respond with something other than Q*Bert swear words.

Sources close to Konami say that Mathiu Silverberg will no longer be a famed Military Surgeon in the remaster.

Falselogic said:
As someone who owns physical copies of both of these games. I have to say I am against this release. It hurts the value of my very real property!
Click to expand...

I guarantee you it does not. If my Neo Geo Pocket collecting is any indication, cheap and readily available modern versions don’t actually do much to the price of the originals.

Once games hit a certain threshold they cease to be games and become “assets” to be traded back and forth between resellers or scooped up by collectors and placed on a shelf forever. They’re expensive because they’re rare objects, not because people want to play them.

Nah, screw that noise. I get annoyed whenever a game I own gets more expensive on the open market, because it's no longer a GAME, it's an investment. Then I have to decide if I want to just keep it and (heaven forbid!) play it, or sell it before the bubble bursts and put the money into more video game crap.

I for one welcome our digital re-release overlords. I have Suikoden 2, but it's a video rental copy and a fucking mess as a result. I'd rather play that on my Vita through the magic of PSN, or get this re-release on the Switch and maybe get a translation that doesn't look like it was done by a thousand monkeys at a thousand typewriters. I couldn't even port my character from Suiko 1 into Suiko 2 without the game butchering his name. That localization truly was the blurst of times.

I was joking, y'all.

Maybe with this release I’ll finally get around to playing these games, the way I’ve been telling myself for years that I should!

Exposition Owl said:
Maybe with this release I’ll finally get around to playing these games, the way I’ve been telling myself for years that I should!
Click to expand...

But I played through the first two games years ago! Not the third or fourth, because the third one wasn't Suikoden really, and the fourth wasn't much of anything. I would have tried playing through Suikoden V, but those load times were a hassle. And don't even get me started on Suikoden Tactics...
You must log in or register to reply here.
Share:
Facebook Twitter Reddit Pinterest Tumblr WhatsApp Email Share Link
Top