We're all just here for the deep Urza lore - Talking about Magic: The Gathering!

CaptBlasto said:
Would Adventure cards fit your criteria? They don't have the multiple artworks, but do have multiple names and text boxes. There are definitely some interesting cards in that category, as well as fixing in green.
Click to expand...

Certainly if I run into issues making a working deck then Adventure cards could be an easy way to bend the criteria. I’d be inclined to avoid it unless really needed since this is more a flavor theme than an attempt to make something really competitive.

FYI - Shivam did a guest spot on Tap Tap Concede today. I only know D&D lore tangentially, so there were some good stories in there I had no idea the cards were calling back to.

that was a lot of fun!

I've had a Mimeoplasm deck for about six months and I've had a lot of fun playing it but I ran across this card called Marionette Master the other day at Vintage Stock in their 10 cent boxes and thought it would be a fun thing to copy the ability of and after a few attempts I finally got to Mimeoplasm that card with another that gave me 10 +1 counters and I started sac'ing unassuming lockets, treasures, etc. that had been sitting there unused. It was the best game I've had in a while.

marionette master is one of my absolute favorite cards, and an auto include in any artifact deck i make with black

Gonna have to check out that Tap Tap Concede tomorrow, thanks for the alert!

Wizards is giving everyone a free premier draft entry for Ahmonket remastered this week as well as free entries for Kaladesh and Ikoria next week cause they had to delay Historic Horizons.

Staff member
Dark Ritual and Seething Song are too good but treasure can be an entire fucking evergreen mechanic?

I was looking at the new stuff coming out after the big Magic announcement stream and I noticed that bundles are going to have set boosters instead of draft boosters from now on. I kind of hate that. I liked buying a bundle to be able to crack a few packs and keep some to draft casually with. I could usually hunt down a deal from various online game stores where the price per booster wasn’t much over a box either. Set boosters are neat to crack and all, but you’re getting 8 instead of 10 and they’re only good for the one thing. I’m a weirdo who likes collecting all the different land art, so that’s still there, but this really kills the value of these things for me.

Edit cause I forgot and don’t want to double post:
Apparently Seanbaby and the LRR crew were on the flavor text team for the new Un-set. So that’s going to be a thing.

Limited Resources is apparently now sponsored by...
... a fuckin crypto exchange. Perfect way to flush away all their credibility.

the crypto folks are paying Marshall enough to make up for the epic income loss from not being a commentator anymore. you do what you have to these days.

I was away from the game for previous trips to Innistrad, but I am the only one who thinks that this Day/Night cycle is needlessly fiddly?

I cast two spells, so it becomes day... or does it become night? Wait, does it have to be my spells? Oh, wait, it's neither, because it's not day or not yet? Oh, wait, yes it is, because I cast a Daybound permanent, even though it doesn't say on the card that it becomes day when it enters...

Having watched a few games in the LRR pre-prerelease last night, in practice the day/night thing doesn't seem that bad to track. A big thing to remember is that only the active player can make it become day, so if you cast two instants during your opponent's turn it still won't change anything.

Looking forward to drafting a new set later today, assuming Arena hasn't collapsed into a black hole. I didn't care for AFR all that much.

It was watching the PPR that gave me that impression. They were constantly fucking it up or getting it backwards, and I have every confidence that I'll be doing the same.

Did two MID drafts today, and I kind of hated it? Granted, my sample size is very very small, but in the 10 games I played, every single opponent was on B/x. I think I played against one opponent each who was playing green or blue. Black seems to be far and away the strongest color, and while things obviously won't be so bad in a physical pod, on Arena it already feels like I'm playing against the same exact cards in every game. This was my problem with AFR as well.

I'll probably do another draft tomorrow, but if the format really does shake out to be Play Mardu Colors or GTFO, I can't see myself spending too much time on it. What happened to draft environments where there were more than three viable archetypes?

Also, for what it's worth, day/night almost never came into play. I think that mechanic kicked in maybe once in each draft I did.

Anyway, you all should probably take this post with a boulder of salt since it's the first day of the format and all. I would love to be proven wrong about everything I just said!

i got thrashed by a gw deck today, so i think the colors are pretty balanced if you find your lane. Day/Night has been hyper meaningful in a few games, and just bookkeeping in others. I'm still on the fence about it

Participated in 3 drafts today and my conclusion was "This format is fiddly and the cards have a ton of text I'm going to have to learn to shorthand." I have no idea what's strong yet.

I had a fun G/B deck yesterday that felt pretty strong, so it's good to know that green is playable. I think I need to watch some people who are better drafters than me to really get a sense of things, though.

I've been on a tear with historic Merfolk the last couple days, getting all the way up to mid-diamond, so I decided to just grind it out and hit mythic for the first time. It's a little victory, but I'll take what I can get these days.

Goddamn it WotC. I don't want to pay you $30 for 5 basic lands but these things hit me right in the nostalgia center of my brain. I feel like King Graham should be walking across them. 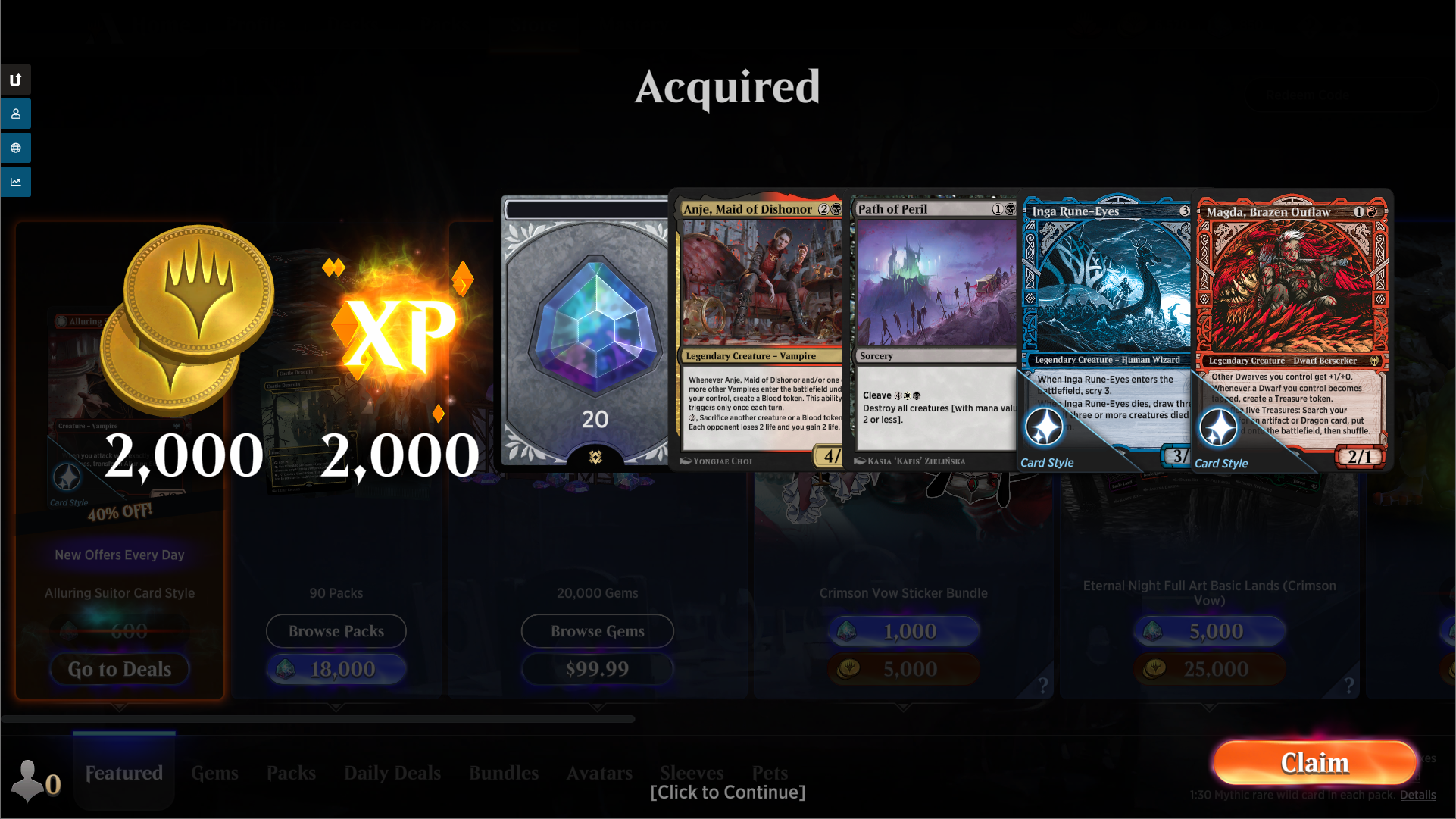 Today's planned update for MTG Arena to address numerous bug fixes (21021.11.10 patch notes) has not gone to plan, and instead will be rolled back until

First previews are out for Neon Dynasty, and I have more land lust.

I’m on my phone so I can’t inline them easily, but check out this real estate.

I’m seriously considering gathering up a draft land set of these things. They are drop dead gorgeous.

I caught the Weekly MTG stream about Neon Dynasty yesterday. I haven't been keyed into Magic for a number of years now, but Kamigawa was my favorite set and I've long maintained a Return to Kamigawa would get me to come back to Magic for a little while. But I guess monkey paw wishes are a thing because my initial impression of this set is not great and not what I had in mind.

I just don't see how Japanese Cyberpunk is an original take anymore in the year 2022. What made Kamigawa compelling in the first place was how the flavor was extremely unique among Magic sets and also just among fantasy media in general. And what was extra appealing to me about it was how it was entirely "played straight" with its Japanese fantasy inspiration and specifically didn't have more modern pop culture stuff anywhere near it. And sure, Rosewater said there's going be a ~50/50 split here between the modern high tech stuff and the traditional Kami fantasy stuff, but that's not the same.

Those full-art lands are freakin' amazing though, for sure.

YangusKhan said:
I just don't see how Japanese Cyberpunk is an original take anymore in the year 2022. What made Kamigawa compelling in the first place was how the flavor was extremely unique among Magic sets and also just among fantasy media in general. And what was extra appealing to me about it was how it was entirely "played straight" with its Japanese fantasy inspiration and specifically didn't have more modern pop culture stuff anywhere near it. And sure, Rosewater said there's going be a ~50/50 split here between the modern high tech stuff and the traditional Kami fantasy stuff, but that's not the same.
Click to expand...

This is how I feel about Neon Genesis Kamigawa too, and I wasn't even playing back when the original Kamigawa sets came out. I also don't feel like cyberpunk anything is in line with Magic's identity (although with the endless parade of Secret Lairs and the upcoming Universes Beyond stuff it's getting harder to say what Magic's identity is at all, at this point).

kamigawa looks so damn cool though