Video game cover art (and more) : Who covers the covers?

Staff member
Moderator
Oh, thank you for finding these Ningyō Tsukai scans. They're much better than what I've been able to find in years past.

I've always liked the concept for the PCE Advanced V.G. package, with the other fighters showing in windows formed by Yuka's truly endless hair. The original game's illustration also continues onto the back of the package, which is interesting: 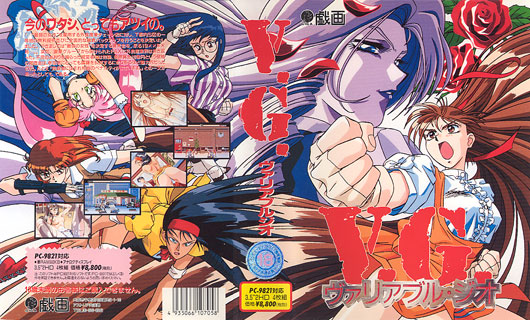 I'd never looked too long at Asuka 120% before, but that butch karateka is a dead ringer for Tereshkova from Yawara!, which would still have been near the height of its influence in '94.

There's probably a fairly sizable feature waiting to be written in finding all the Yawara analogues in fighting games created in the manga's wake, too. Always enjoyed that ouroboros of recursive real life and fictional influences trading back and forth.

I should mention that I remember the very good sprite rips you put together of some of this stuff in years past, which helped in the mental process in deciding what to cover. They're a good indication of the merits found in sometimes dubious contexts with works like this, like other individual aspects of the games--Asuka 120%'s soundtrack is an easy recommendation on any platform it turned up on, for example.

I am continually disappointed that we almost always see only pretty thin girls in fighting games while the men get to be old or overweight or enormous walls of muscle. Of course, I know it's not just in fighting games, this sexual dimorphism is in other genres as well.

That said, those are some pretty awesome covers.

Good stuff there, Peklo. It does make me wonder how big of a roster you could make for a crossover game that only included female fighters who fight in Japanese schoolgirl sailor uniforms.


MetManMas said:
I am continually disappointed that we almost always see only pretty thin girls in fighting games while the men get to be old or overweight or enormous walls of muscle.
Click to expand...

The exceptions to that seem to be few and far between. But I feel like that is a topic for another thread.


Peklo said:
The back of the box talks trash about the ostensible competition and mischaracterizes the Mario brothers as "pudgy little painters."
Click to expand...

Box copy and ad copy trash talk is another topic which I feel could easily fill another thread.

Speaking of competition or rivals, here's the next cover: 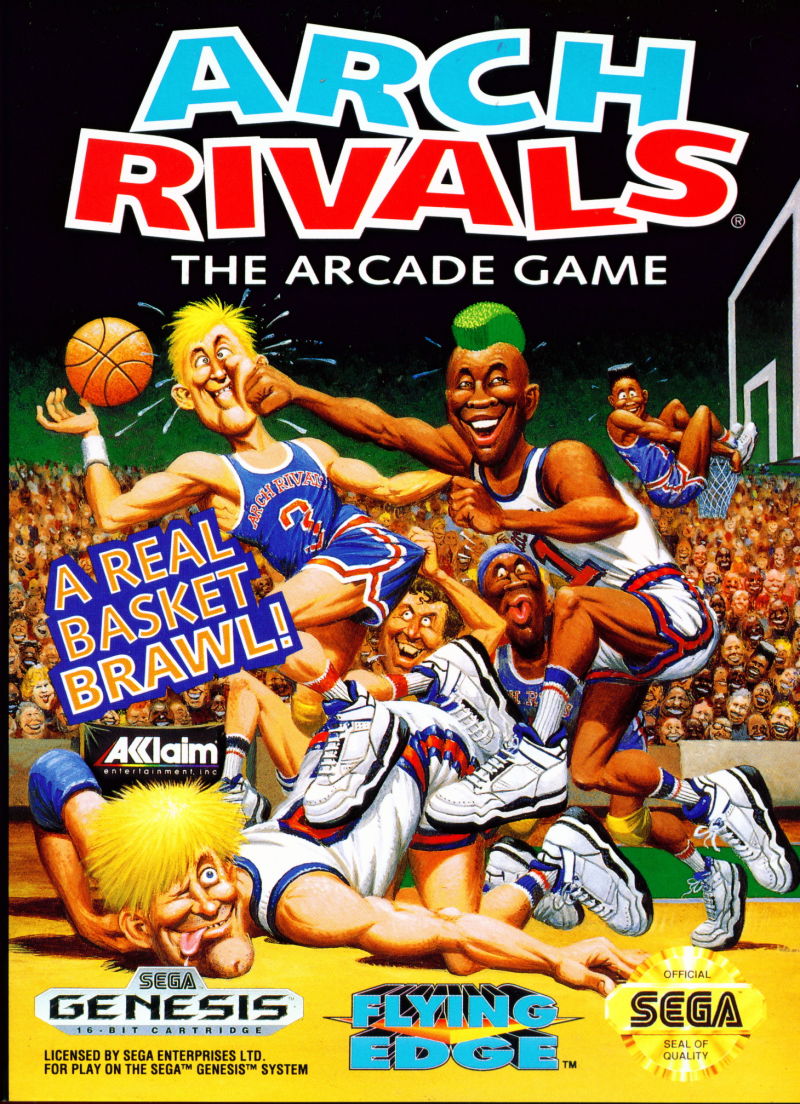 Here we have a colorful scene of absolute bedlam on a basketball court that reflects the in game action where punching other players is allowed. The players are depicted with quite realistic looking forms but with somewhat cartoony and exaggerated expressions. This is fairly faithful to how the sprites appear in the arcade version of the game (even if they don't exactly or even closely match).

The spectators in the background seems to be quite amused by the spectacle they are witnessing and are just sitting back and enjoying it.

I do wish I could find out who drew this cover art. It seems so very familiar and reminds me of the cover art for either Mad or Cracked magazine (or maybe even the art from Garbage Pail Kids). If it was not made by an artist involved with those then it does an excellent job of triggering my nostalgia for them.

One nitpicky complaint I have about this version of the game - it does not use the same title logo/design as the arcade game. The design of this version looks ike a cheap knockoff when compared to a version that is the same as the arcade (like this one). Amusing side note - that link show the cover art for the German version of the game and replaces the "A real basket brawl!" (no, not that one) tagline with "ein basketkrawall" which apparently means "a basketball riot".

And now for my next presentation. 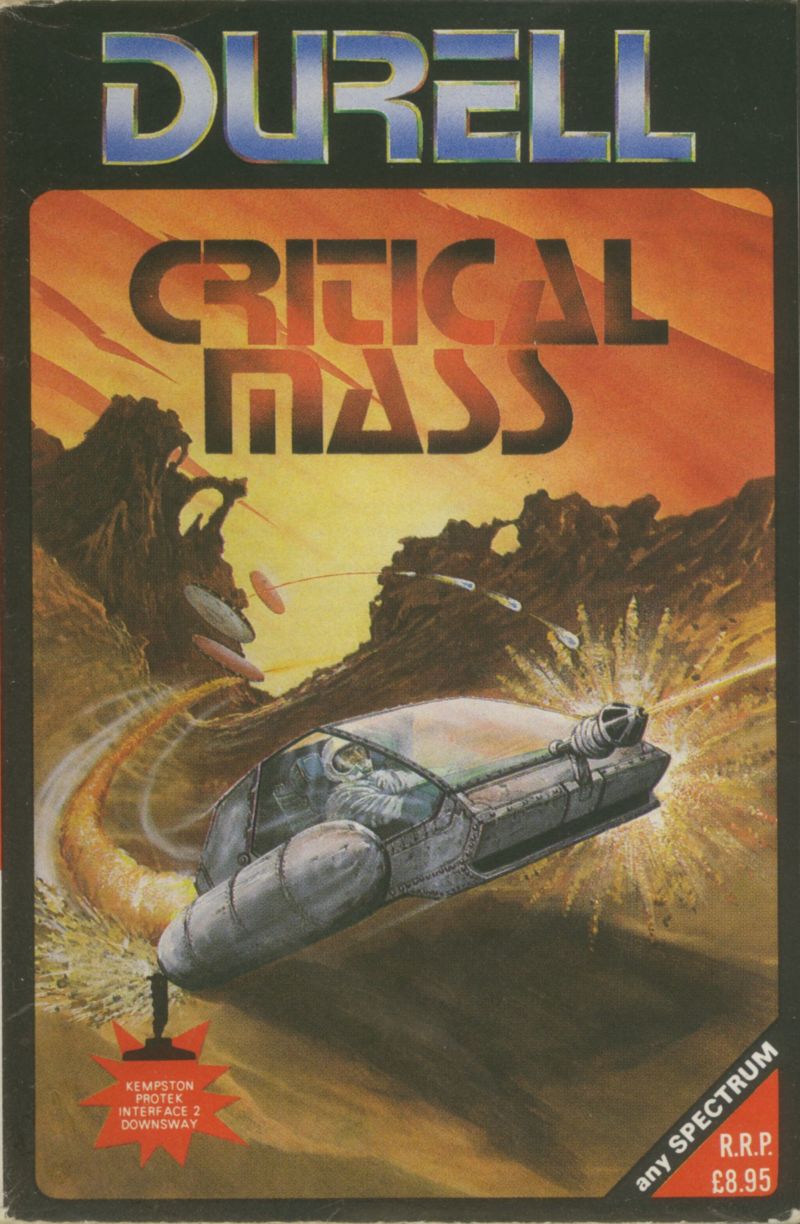 Here we have a nice action shot of some kind of space dune buggy tearing across some alien badlands and doing a sick "wheelie" while being chased by some ... small flying saucers I guess?

The space buggy has a nice design but doesn't look too flashy or ostentatious. It is a working vehicle which has seen some use (but has not been used up). Its greyish-white color contrasts nicely with the earth tones of the terrain that it is moving through. The design of the space buggy and the fact that the planet looks only slightly alien contribute to the feeling that this art is still science fiction but is somewhat grounded in realism.

(Critical Mass is a 1985 action game developed by Simon Francis and published by Durell Software for the Amstrad CPC, Commodore 64, and ZX Spectrum. It was released in North America as Power! The vehicle you control in the game is a hovercraft.* )

*Which makes me wonder what the wheelie equivalent is for that type of vehicle. 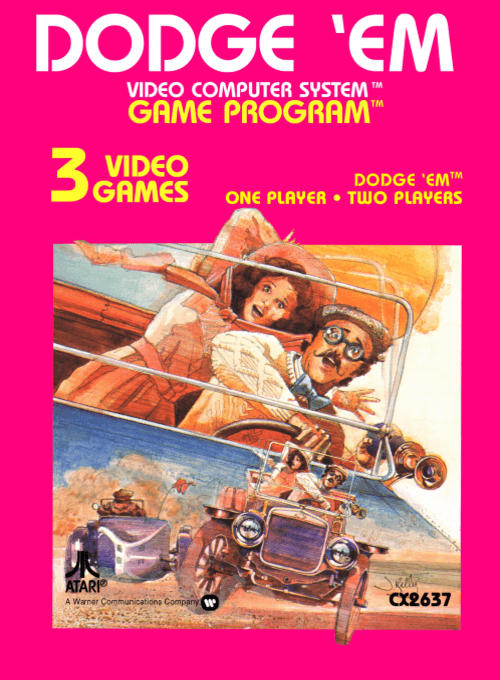 Man if only Atari games lived up to the box art.

Those Daring Young Men in Their Jaunty Jalopies...

Johnny Unusual said:
Man if only Atari games lived up to the box art.
Click to expand...

Someone should just make a whole series of modern games based on Atari box art concepts (with no regard to the actual games they were attached to).

Johnny Unusual said:
Man if only Atari games lived up to the box art.
Click to expand...