The Thunderdome Voting Thread #1 - Remember where you are. This is Talking Time. 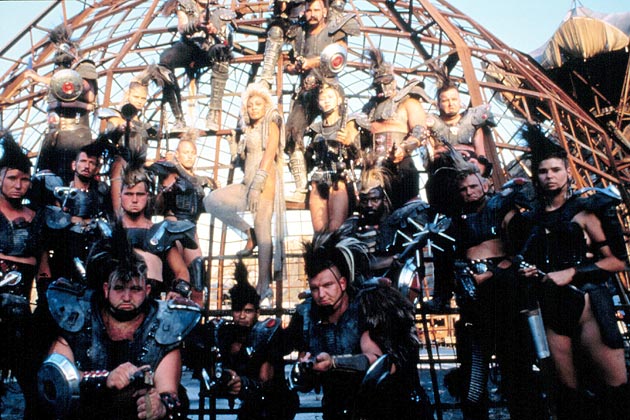 Welcome to the Thunderdome! The first Thunderdome of the new forum! If you are new to the actual activity for some reason, here's the deal: The Thunderdome is a voting based activity were various things are pitted against each other. How about I try to break it down to keep it simple:

1) We are given a topic, usually musical in nature (more specifically usually video game music, though others have been chosen. And I have some ideas that go beyond general music, though I doubt people are as interested in my idea for a "movie trailer" thunderdome).
2) People are invited to submit songs or musical pieces they like that fit the topic before a deadline (you may be told the limit of how many you may submit and it is not uncommon for that number to grow during this process)
3) The entries are randomized and pitted against each other where you must choose (usually) one of the two songs. Usually its two matches a day. Just pick the ones you like best from the two matches.
4) This goes on until there is only one entry left!

I hope I explained it clearly. But anyway, we aren't at that part yet. We are at the part where we must decide our topic and with that our host. You must choose between...


Best Video Game Music Elemental Domes (Host: RT-55J) - A four quadrant dome. Four elements are chosen and music is too be chosen within those four elements in four elemental music contests. An exciting experiment in the new era of dome.
Game Over Dome (Host: Falselogic) - We are in with the new, but every new beginning comes at the heel of an end. A perfect way to say both hello and goodbye!
General BGMF Thunderdome (Host: Issun) - The simplest of domes and a good way to start the new Talking Time with a completely open to video game music in general. I have no idea what the f stands for. Is... is it fuck?
Mega Microdome$ (Host: Bongo) - A unique thunderdome Bongo has been pitching for a while, the premise would be that all of the other thunderdomes submitted would be done in a mini-mode (fewer entries, shorter games and a bunch back to back in quick succession). A fun new way to kick off the new Talking Time
Shuffledome (Host: Johnny Unusual) - Take whatever music playing device you use. Go to "songs" and hit the shuffle button. You MUST nominate the first five songs in the order they appear in. Even if the choices are kind of embarrassing. Don't back down, let your freak flag fly! Another new kind of dome for a new kind of Talking Time.

Honestly I can think of no better dome to have as new TT's first than a BGMF.

I think a lot of people disagree with me, but I'd be happier with any dome where users were more limited in how many tracks they can nominate. I always get discouraged when everyone is tossing 4-5 songs into the mix.

I'm sure that can be managed? A two song cap pet person? Unless that makes it too small a list?

Having fewer nominations does make it more likely to get knocked out early which I think can diminish some people's enthusiasm for continuing to participate in a dome.

Two does feel a bit on the short side to me. I think 3 might be a good middle ground for that.

Best Game Music Forever Thunderdome, a term coined by Mr. Lokerson. It originally started in '09 as a semi-joke thread to settle which was better, a certain Mega Man track or a certain Silent Hill track. Then it grew beyond Lokii's control and he had to put it down with the help of a plucky band of heroes. A year later I asked if it was okay if I started up a new one and he didn't say no, so here we are.

Falselogic said:
I'm sure that can be managed? A two song cap pet person? Unless that makes it too small a list?
Click to expand...

The first one I ever ran we were able to fill up 64 slots with one nom per person, but participation has never reached that high again. I personally love doing 128 tracks if the topic can support it, since that means people have to kill fewer darlings, but I can understand with people who only want to nominate 1 or 2 that it could feel their choices are being buried under everyone else's avalanche of tracks. I've started thinking about some happy mediums just in case mine wins.

Frankly, I prefer the four or five but I have no issues with shorter lists and have definitely had some list ideas that work best in short form.

BGMF sounds really exciting to me. Mainly as it's so simple, yet so broad.

BGMF is in the lead. A day and a half to go, yo! Show your love for what you want to see (Frankly, they all look like killer topics to me).

Staff member
Moderator
Just want to say thanks for taking the lead here, Johnny. A Talking Time without VGM could not survive long.

I really love the idea of an elemental thunderdome.

oh hey you can change your vote after voting

Yes, but how early?

Elemental Dome and Best Game Music Dome are tied. The winners can decide amongst themselves who goes first.

I'm willing to defer to @Issun if that's what he wants. Otherwise, we'll have to settle this in the back alley with a well-choreographed dance number.

I'm glad that seems to be the order, because that's sort of what I was hoping for. I like opening with something very simple before moving into a bold new kind of topic. Looking forward to both!