Masters of the Universe: Revelation

Man. I probably won't watch this, but that is a hell of a trailer.

This looks… substantially better than I was expecting

As I said in the Netflix thread:

It's weird that this show is being billed as a 'continuation' of the 80s series, right? I'm not the only one who thinks that's weird? Because that is absolutely nothing like the 80s show, outside of a fairly faithful take on the character designs (I appreciate buff Teela). It feels like like how people like to remember the cartoon being like, when we were all little babbies and He-Man was the mostest amazing thing we ever saw.

This isn't really a criticism, mind. I'd just be totally fine with them billing this as a new property inspired by the original. I guess they don't feel confident it could succeed without that hook? Because that fear is misplaced if you ask me, it looks pretty swell as-is.

Great voice cast thus far too. Still undecided on Skeletor though. On the one hand, it's nothing like Alan Oppenheimer's iconic performance and sounds a lot like Hamill is leaning on his Joker delivery for the role.

On the other hand, what's not to love about 'The Joker But A Skeleton Wizard'?

Oh my god, that looks AMAZING. A shame that it's directly to Netflix, I would love to watch that thing in the cinema.

Apparently Alan Oppenheimer is in this, just not as Skeletor. I guess he's getting a bit old for that voice.

Hamill is one of my first draft picks for someone to play a skeleton wizard.

I don't know if I'll care about the show but the trailer made the right song choice.

Yeah, that song was really the cheesy cherrie on top of that pile of awesome.

I can appreciate that they know exactly which demographic they're marketing to.

When this was announced I was a bit concerned they would lean too much in a dark and violent direction but that trailer and the music choice assuaged those fears.

Rewatched the trailor, because AWESOME. I love that Orko seems to get at least one badass moment.

FelixSH said:
love that Orko seems to get at least one badass moment.
Click to expand...

It's here! And with here, I mean on Netflix.

Just started watching it. Is Faker even a regular from the old show? I only know him from that one radio tape.

Oh god, that's so goofy. Skeletor created a small and a giant portal. He hit through the small portal, and his fist came out the other portal, but giant. Delightful.

Holy Shit, Skeletor just killed Moss Man by burning him completely, and then He-Man actually put his sword THROUGH Skeletor. What the hell.

Edit: Watched the first episode, mind was blown multiple times. No idea, if it's the show or me, but I loved what I saw. First episode of five, in case you are curious. But this is only part 1, I guess? I'm confused. But, considering what characters and vehiclesare shown, this show is clearly made with love.
Last edited: Jul 23, 2021

Yeah, they're splitting the first season into two parts of five. Why, I don't know.

I thought what we got was terrific. Felt like I was 5 all over again. Give us part 2 now!

He-Man and Skeletors fight had big Marvel vs. Capcom energy and I want more of that

Love the redesign for Orko

Yep, this is a good revival!

Toyetic as hell. I'm also enjoying it, but dear GOD... The vitriol spewing from various YT channels is unreal.
Wouldn't be surprised if some of them were the same crowd that got butthurt over She-Ra not wearing her old outfit.

Daikaiju said:
Toyetic as hell. I'm also enjoying it, but dear GOD... The vitriol spewing from various YT channels is unreal.
Wouldn't be surprised if some of them were the same crowd that got butthurt over She-Ra not wearing her old outfit.
Click to expand...

Let me guess, they don't like that Teela is the main character, and that the main cast isn't He-Man himself? I honestly can't understand how you wouldn't like this thing, if you watched the old show at all. It's amazing, all around. This


masterthes said:
I thought what we got was terrific. Felt like I was 5 all over again. Give us part 2 now!
Click to expand...

is basically how I feel. My mind was blown so often by what I saw, it's crazy, can't remember when that happened last time. Add all the obscure call-backs (that I had to look up), and how I had completely forgotten how awesome these designs always were - I love what we got here. Like, Snake Mountain is such a weird, great design, as is Skeletor and his staff.

I loved the fourth episode, where we get these scenes between Evil-Lyn and Orko, see Orko being awesome and learn why he spends all his time on eternia, instead of Trollan. And that there is a bond between them - I love that Lyn has a soft spot or the other magician on the other side.
And also that we learn why she is EVIL-Lyn. Hehe.
Also, Orko, no! So sad!

Also, some stuff that seems to have been from the original show, but that I didn't remember being a thing:
Did the queen really know, that Adam was He-Man?
Was the rivalry between Mer-Man and Skeletor a thing? I thought that was only from the radio tapes.
Did Beast-Man always have this adoration for Lyn?
Did Lyn always have this adoration for Skeletor?

Also, King Randor is a grade A jerk.

Oh, and Tri-Clops has a great, uh, redesign, it's so goofy.

And now I'm done watching. What an amazing show. Didn't expect the twist at the end - I assumed Lyn had her own plan. But it's clear, that Teela is the new He-Man, I expected the show ending with her using the power. I was shortly disappointed, because getting Adam back as He-Man seemed kind of boring.

All I want to know is this:

At any point does Beastman deliver a villanously flirty "Hey Adam?"

Yes, though it was inferred more than said.
Eh... Not so much in the Filmation series. Mer-Man didn't get much screen time.
No, that's new.
Not as I recall. She respected his power. In the 2002 series it was a thing

This is easily my favourite Kevin Smith production and in my top two favourite MotU series.

And the puns! My land-a-gosh the puns.

I love how they’re pretty committed to keeping the designs as unchanged as possible (everyone has furry loin clothes; the vehicles are all as clunky as a 1980s toy design would allow) but they have no problem jazzing up designs that need it (Teela and Orko both benefit the most; and Trapjaw looks a lot more Frankenstein-y)

Agreed, Beastman also looked way more monstrous and dangerous than he ever did in the original cartoon. Here, he looks like he can rip you in half without a single drop of sweat.

I also liked, how there was now a clear difference between Adam and He-Man. The former looked like a pretty-boy, while the latter seems not only way more muscular, but also taller (but that might only seem that way). Adam from the 80s cartoon always looked way too buff, for someone who always lies in the sun and plays music or writes poetry.

I told someone about He-Man, who hadn't seen much of it (it never ran in Austrian TV), and he found the names of all the characters really funny. This show (and She-Ra) really has the best/dumbest names.

I don’t think anything has surprised me as much as the start of episode 2 when Stinkor took off his mask and it turns out he’s a hairy frogman.

Perhaps that is the Revelation that the title was talking about

No that was the face he had on the original figure. Here's a pic of the toy without the armor 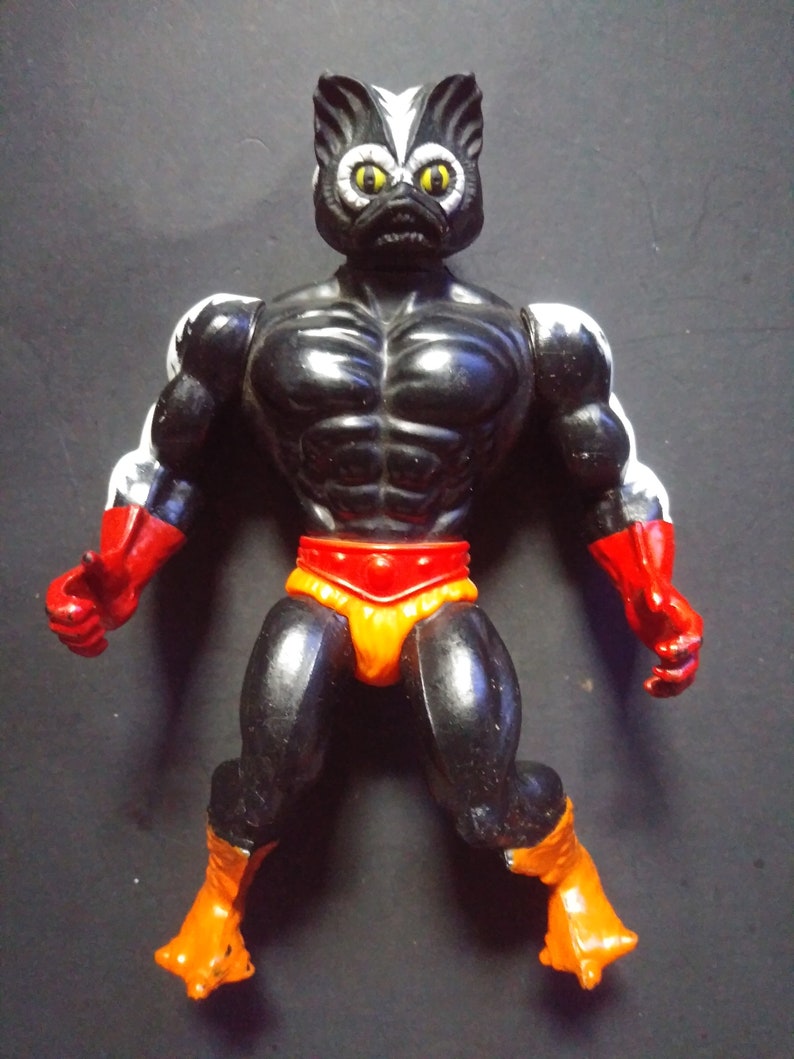 He also had little ducky-feet apparently.

Dude was really all over the place aesthetically

You could say that about the entire toyline.

Saw this, and thought it was pretty solid. I understand how fans of the original show would want to see more He-Man involved, but as I understand it, this show never had any depth at all, and I like that there's some room for actual plotting here. Now, no mistake, I want to see more He-Man in the back half, but there's promise here that I hope resolves satisfactorily.

Oh, and Teela's kind of a jerk, but I know that's part of her character growth, too. I mean, she wasn't the only one that didn't know Adam was He-Man, because in the scene where she goes off, his own father wasn't aware.
Last edited: Jul 26, 2021

Purple said:
All I want to know is this:

At any point does Beastman deliver a villanously flirty "Hey Adam?"
Click to expand...

FelixSH said:
Beastman also looked way more monstrous and dangerous than he ever did in the original cartoon. Here, he looks like he can rip you in half without a single drop of sweat.
Click to expand...