Let's play In the Year of the Dragon: There will be unemployment 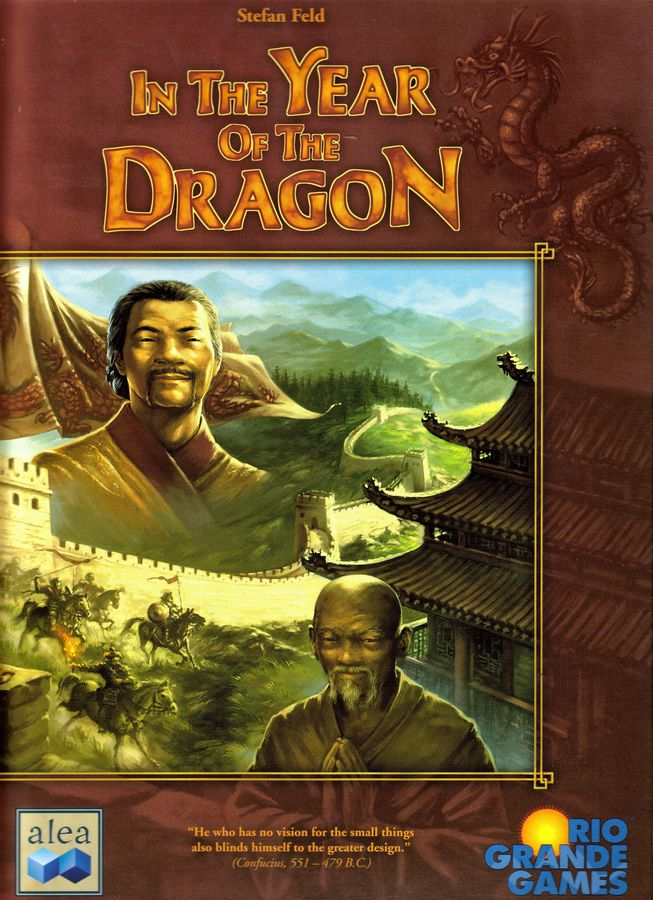 He who has no vision for the small things also blinds himself to the greater design.​
In the Year of the Dragon is a game of careful planning, where every obstacle is laid out before you at the start of the game, and you must navigate those obstacles to avoid disaster. It is a game where your plans go awry, and when that happens, someone gets sacked.

It is also a very Stefan Feld sort of game. Stefan Feld's games have two hallmarks that set them apart from other Eurogames.

First, you don't get to freely pick your actions, though there's almost always some way to mitigate this. In Oracle of Delphi, for example, you need to match what you want to do with the color on one of your dice. ITYOTD is actually more forgiving than most of Feld's oeuvre, because you can always do what you want as long as you can pay for it.

Second, there's some sort of upkeep that will punish players who ignore it. In Notre Dame, plague rats will overrun the city if left unchecked. Some of these games lean harder into one of these points than the other. ITYOTD is basically all upkeep, all the time. More on that in Events below.

We will not be playing ITYOTD on these forums, but we will do our headhunting here. The game can take up to five players. If fewer than five sign up, I will slot myself in. The game is at its best when competition is tight, after all. 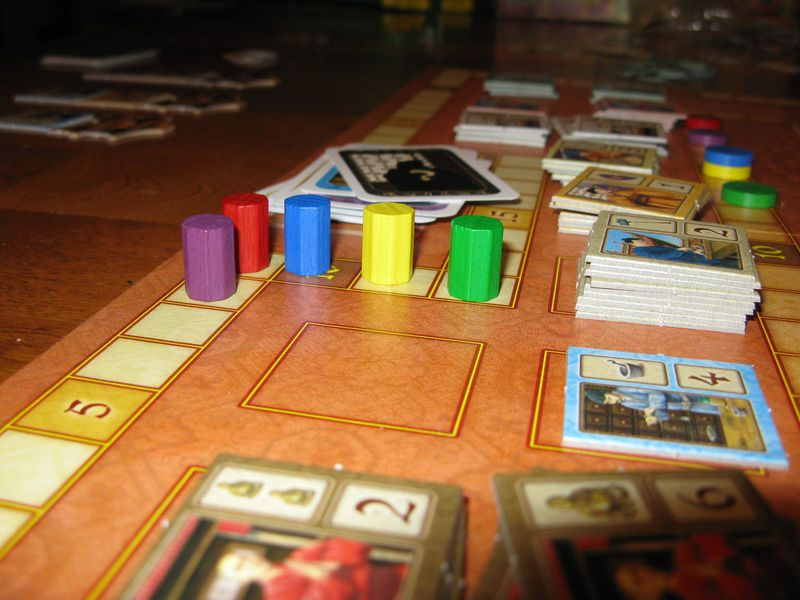 The game as it is played

Each round of the game consists of four phases:


At the end of the game, you score 2 points per remaining person, 1 point per 3 remaining yuan, and Buddha points (more on that in Persons below). 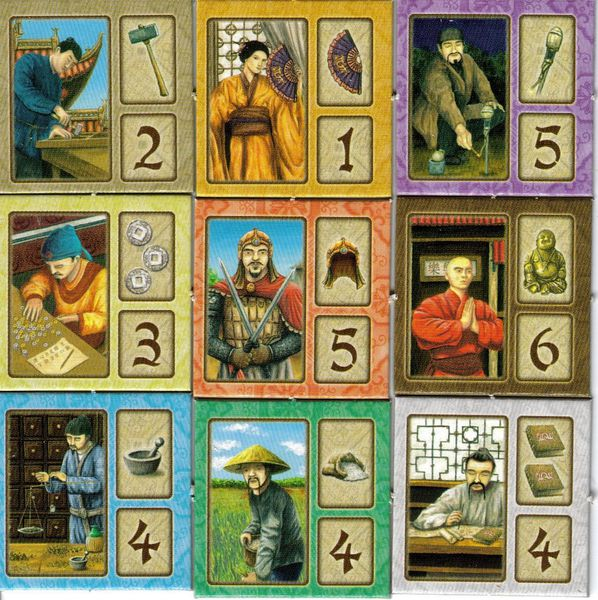 You need to keep your palaces staffed, if for no other reason than that they mysteriously decay when left empty. At the start of the game, you will take two different young persons, making sure you don't take the exact same pair of persons as anyone else. Thereafter, the persons in your palace are determined by the person cards you play. You have 11 person cards: one for each type of person and two wild person cards. (That doesn't mean that the person is wild. It just means you can use it to take any person.)

Most of the persons come in old and young flavors. Old persons are more skilled but less popular: they will provide more of whatever it is they do, but they will advance you fewer spaces on the person track, which determines player order. First, here are the exceptions -- these persons are always young. In parentheses is their person value. (Important: A lower value does not make them any less of a person.)


The following people come in young and old flavors. In parentheses are the young person value followed by the old person value.


Anytime you add a person to a palace, including at the start of the game, you advance on the person track according to the person's person value. (Note that if you take a person who you immediately fire, that person was never placed in your palace.) There is a limited number of each person tile, and fired persons do not return to the person pool (presumably, they were given a generous severance package).

Note that you have 11 person cards for 12 months. There is no hiring phase in the final month. 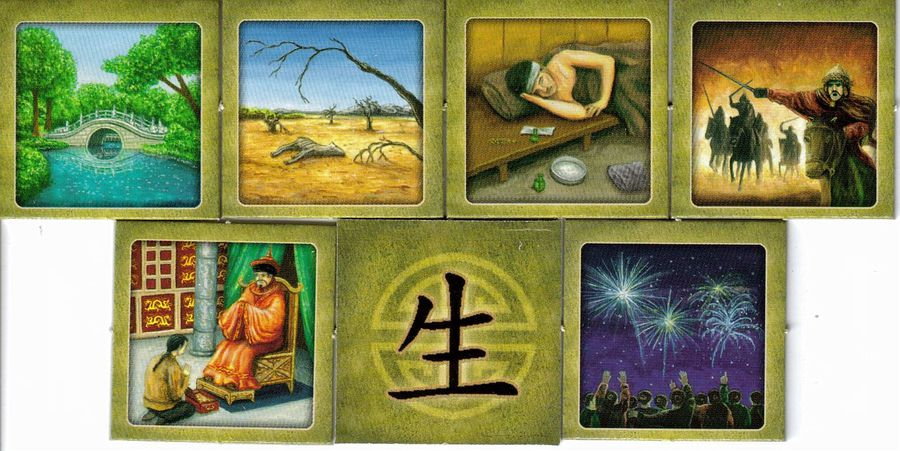 
Keeping up with the times: Events

The Year of the Dragon is divided into twelve months -- imagine that! Each month will have an event, and generally, those events will require you to do something or pay the consequences. The events are distributed at the start of the game; you can use your oracular powers to determine what will happen each month from the start of the year. Aside from the first two months, you will never see the same event back-to-back.

It is important at this point for me to emphasize that ITYOTD is a peaceful, pleasant game where no harm befalls anyone. This is canonical. Please don't try to suggest otherwise. 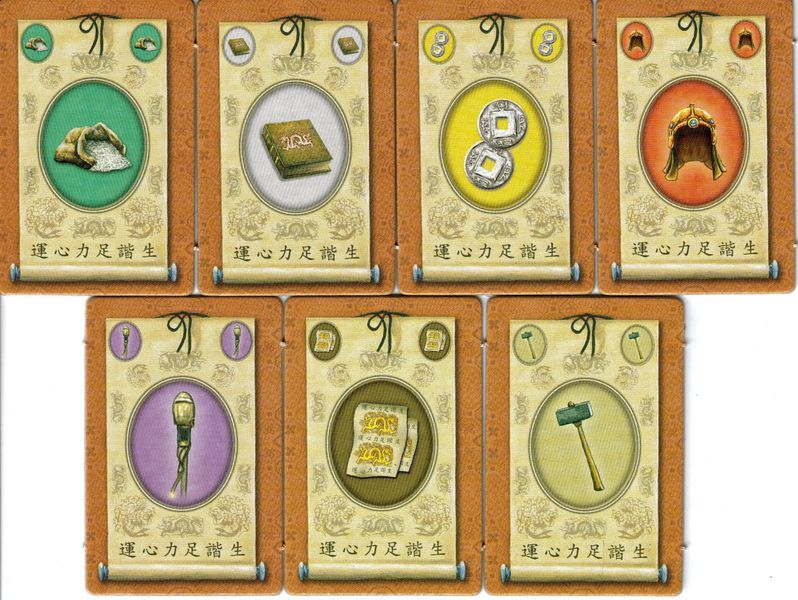 Each round, you can take one action if you like. If you'd rather not, you can pass. If you pass with fewer than 3 yuan, you go up to 3 yuan. That's handy, because that's exactly the number of yuan you need to take an action in a group another player has taken. You can also avoid paying by going to a different action group or being the first player!

What's this about "action groups"? Well, each round, the seven actions are bunched up into a few different groups. For example, Build and Privilege might be one action group, Yuan and Rice might be a second, Fireworks and Books a third, and Parade on its own as a fourth. The groupings are shuffled each round. 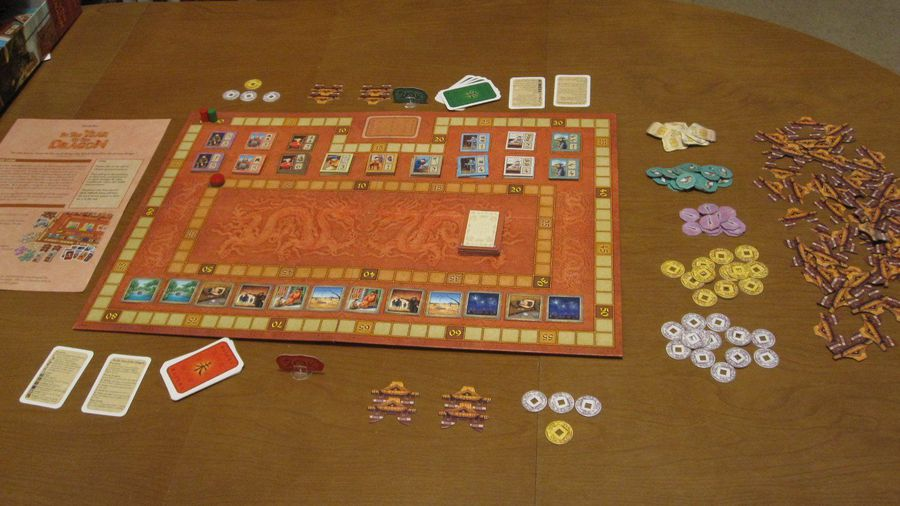 Putting it all together: A sample setup and first round

Federico is randomly selected to be the starting player. Noting that both Contagion events are coming up early, he takes a young Healer and Soldier, putting him at 9 on the person track.

Helen is next. She likes the healer, but she wants to have turn priority. She takes a Healer and a Monk, reaching 10 on the person track.

Seamus is last to go. He would like to take Healer and Soldier, but Federico already took that combo. He takes Healer and Pyrotechnician instead. That puts him at 9 on the person track, but since he got there last, he beats Federico in turn order.

The first round starts: the actions are shuffled and revealed. The groups are [Build, Rice], [Privilege, Parade], and [Fireworks, Books, Yuan]. Helen is first to go. She takes Build and builds a third palace, which will score her an extra point each month. Seamus takes the Privilege action and pays 2 for a small privilege, which will score him an extra point each month. Federico doesn't want to take the fireworks, books, or yuan actions, and if he passes now, he won't get any yuan (he already has 6). He decides to pay 3 yuan and take the Build action, like Helen did.

It's time to hire. Helen plays her Healer card and takes an old Healer, which (along with her young Healer) keeps her safe from Contagion but only advances her 1 space on the person track. She puts him in her new palace to keep it from decaying. Seamus takes a Builder, putting him at 11 on the person track, the same space as Helen. Federico sees an opportunity to take the initiative, so he takes a second Soldier. The new player order is Federico-Seamus-Helen.

Since there's Peace in the first month, we skip to scoring. Each player earns 3 points: Seamus has two palaces and a privilege, while Helen and Federico have three palaces.

Here's our events schedule for the year:

With both Contagions early in the year, Healers are bound to be attractive opening picks, but we'll see what our players decide, starting with Karzac.

Shoot, I'd better read the rules!

The Emperor is watching...

The action groups for this round:
[Privilege - Build]
[Rice - Parade]
[Books]
[Yuan]
[Fireworks]

One more thing: persons are limited in stock. I'll figure out how many persons should be in a five-player game and give you the available stock in time for the person phase.

For my first action, I’m going to throw a Parade.

Patrick said:
For my first action, I’m going to throw a Parade.
Click to expand...

*My Soldier Parades around*

(I believe I need to wait for everyone to choose their actions before I can choose a person, but let me know if there's anything else I need to do on my turn.)

Staff member
Moderator
Nope, that's it. Everybody loves a good parade, and so you've advanced 2 person points, maintaining an iron grip on your lead. Karzac goes next.

As for persons! There are 10 persons of each kind, and the ones with the old/young divide are split 4/6 in favor of the young. That means our person supply looks like this:

Asterisks denote symbols, and the number before the asterisks is people points.
Last edited: Aug 25, 2020

I will Build a new palace.

Staff member
Moderator
Karzac's new palace will decay to nothing if there's not someone in it before the round ends, but that's a problem easily solved, especially in a Peace month.

Got a Taxman, might as well collection some Yuan.

As for me, I will go ahead and spend the 3 Yuan to Build, adding one floor to a palace I have and also building a new one-story palace.

Staff member
Moderator
Turtle: you didn't specify which palace to add to. I've added a floor to your soldier's palace, but you can switch anytime before you play your person if that's not what you wanted.

After Sarcasmorator's turn, Patrick can move ahead with the person phase -- more generally, the only thing you really need me to do is to announce action groupings and post status updates.
Last edited: Aug 25, 2020

Though speaking of, how hard is it to relocate persons?

Staff member
Moderator
It is fully impossible. We bought custom nameplates for their offices.

Patrick pointed out that my person count was off on soldiers and scholars. That will be rectified shortly.

I will make an rice

That soldier did such a good job, I'm gonna get another one.

Patrick continues to steal my actions. I'll take a

Staff member
Moderator
Oh - you can take a person someone else took (while supplies last). The only time you're restricted is in the start of the game.

Also, make sure to specify in which palace you're placing your person, even if it seems obvious.

I will place my person in my empty 1-storey palace.

I will take a Healer (1) and put them in the palace with the Taxman.

I think I'll grab an old Soldier for my new palace.

Staff member
Moderator
I now realize the limitations of my emoji-based approach, as I need a separate emoji to represent the old person of each type. There's a key listed in the person supply spoiler. I apologize in advance for the confusion this will no doubt cause.

Sarcasmorator picks a person, then we move straight to scoring.
Last edited: Aug 26, 2020