I'm a known spreader of disease, decay, and destruction. This Halloween, I'd like to invite you to enter my house freely and of your own will in order to destroy me and protect 2020 from Dracula-related shenanigans.

ARE YOU UP TO THE CHALLENGE!?

In the spirit of @Octopus Prime 's MEGAMAS, this year's CASTLEWEEN (previously hosted by the scholarly and talented vampire hunter @Lokii ) may be played by inserting any Game Pak into your game console of choice, finding a Dracula, and destroying him.

When you destroy a Dracula, post in the thread. I, Dracula, will keep a running count of the number of Draculas whipped and present our final count when the month crumbles to dust and we welcome the withering embrace of winter.

If we can destroy at least 100 DRACULAS, before November 1, we can save Talking Time and/or the world from me! At least until 2021.

BUT DRACULA, WHAT COUNTS AS A DRACULA?

A fantastic question! Any encounter with a character named Dracula in which you can fight him and win or lose counts as a Dracula battle. Generally, you will find Dracula (me) in Castlevania games! But sometimes I am also in other games! Will you defeat me in those games as well!? A Dracula who is not a Dracula does not count as a Dracula.

Now I know that in the world of video games, you'll sometimes encounter a Dracula who isn't quite a Dracula, but definitely feels like a Dracula. This doesn't count as a Dracula. But it might count as a BONUS DRACULA! A Bonus Dracula is worth 0.5 DRACULAS. Hallmarks of a Bonus Dracula include black cloaks, swept-back hair, pointy teeth, bat wings, tall collars, and not being named Dracula. If in doubt, as a Dracula myself, I will be the final arbiter of what counts as a bonus Dracula.

What about Gebel from Bloodstained: Ritual of the Night? I assume he counts as a Bracula.

Gebel is a Bonus Dracula.

Staff member
Does Curse of the Moon have a Dracula in it? It feels like it should. I'm guessing it doesn't count if you kill off Gebel in your own party.

What about Alucard in Castlevania III? There's definitely a Dracula in that game, but Alucard is very Dracula-like, and you do fight him.

Dracula said:
Now I know that in the world of video games, you'll sometimes encounter a Dracula who isn't quite a Dracula, but definitely feels like a Dracula. This doesn't count as a Dracula. But it might count as a BONUS DRACULA! A Bonus Dracula is worth 0.5 DRACULAS. Hallmarks of a Bonus Dracula include black cloaks, swept-back hair, pointy teeth, bat wings, tall collars, and not being named Dracula. If in doubt, as a Dracula myself, I will be the final arbiter of what counts as a bonus Dracula.

Not reading the opening post counts as defeating a Dracula.

Anyhoo, I'll be playing the game tonight and I look forward to defeating

What is up with Dracs face in CV1, anyway?

Does he have one snaggle tooth and a banana nose?

It was the scariest thing they could come up with at the time.

Octopus Prime said:
Does he have one snaggle tooth and a banana nose?
Click to expand...

He does look like a very tall Uncle Deadly

Simon woke me up in the middle of my rest and I didn't have a chance to put on makeup. Also that's my favorite necklace.

Also, Dominique from Bloodstained does not count as a Dracula nor a Bonus Dracula.

WildcatJF said:
Can I just let myself run out of HP with Soma Cruz over and over and have that count
Click to expand...

If you're talking about Dawn of Sorrow, you could always play Julius mode!

Arguably this would reduce the Dracula point counter. But we're not ready to switch to hard mode yet.

rofl the best response, thank you.

Hmm, now to sort out how to Vania

BRB designing an indie game where you play Dracula and the object is to destroy yourself in order to atone for the sins eating you alive on the inside.

Kill Draculas smarter, not harder, that's what I always say (I have never said that before). What's the fastest way to accumulate Dracula kills? Is it just replaying the opening to SoTN repeatedly, allowing you to kill a Dracula every few minutes? We could knock this out in an afternoon and be safe from Draculas for the rest of the month because that's what everyone wants, right? Screw having fun with games.
There are a lot of boss Draculas, but how many games have regular-enemy Draculas? Surely at least one overworked employee out there needed to pad out a bestiary with palette swaps of regular vampires and decided to name the top tier Dracula. Is there an RPG out there where Draculas appear in random encounters? Or a game where a Dracula respawns when you re-enter the room?

I know of a game that has regular-enemy Draculas. A couple, even. But I ain't tellin'

Still too small of a scale. Here ya go: 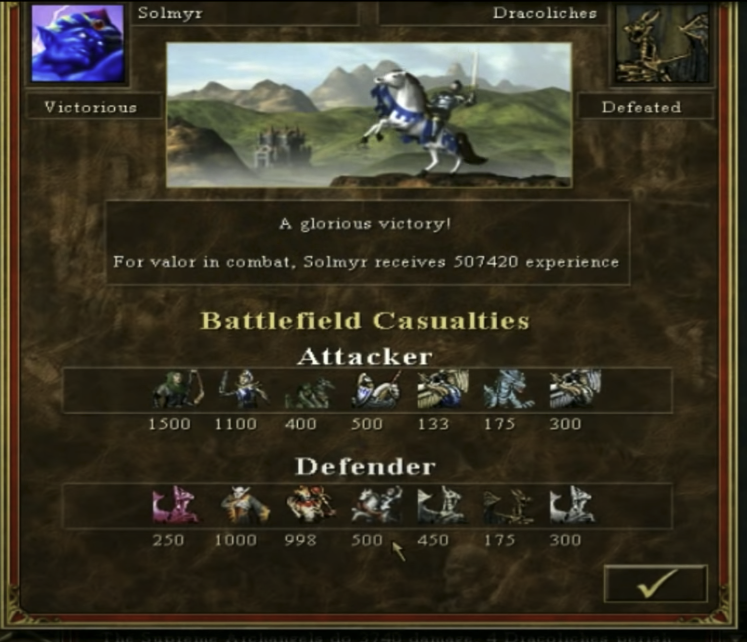 That's 1000 Vampire Lords there in the defender casualties. Don't think you can get more "bonus Dracula" than that, so we're safe until 2025. Now what's for lunch?

Staff member
Moderator
A win like that is like the kid who has a plan for trickertreating at only the houses that give out the most candy: technically efficient but missing the spirit of the holiday altogether.

It's more like the kid who loots his own house for candy, then brags about it.


Dracula said:
Gebel is a Bonus Dracula.
Click to expand...

Is that true even if someone is playing the randomizer mode?
Last edited: Oct 1, 2020

That Dracula is actually a Skeletor

I did not notice that the first post had a list of example Draculas. I had assumed it was a definitive list of all Draculas that counted.*

*In my defense I am really tired.