It's Inktober, yay! Sort of.

Is anyone else participating this year? There was some drama a month or so ago regarding somewhat credible accusations of plagiarism in Jake Parker's upcoming Inktober book. This has dampened the enthusiasm for the event somewhat (2020 is relentless). I was hesitant to, but I'm still planning on following the official prompts this year. For anyone who is uncomfortable with it but would still like to participate, there are scads of artists who put out their own custom prompts. I hope this doesn't drive too many people away.


Last year, I colored a few of my pieces using some water-based art markers, and frankly, they kind of sucked. Uneven and hard to work with. Following the event, I ended up buying a pile of Copic markers and they're awesome. I colored a few of my previous Inktober pieces with them as practice and I was impressed with how easy they were to use. So I'll probably be doing at least a few Copic pieces this year.

I'm hoping to see some cool art this year!

I'll see about joining in this year as I enjoyed taking part last year. Running a popularity contest revolved around drawing at the same time may limit me a bit, but I'll try. Already have a thought for today's. 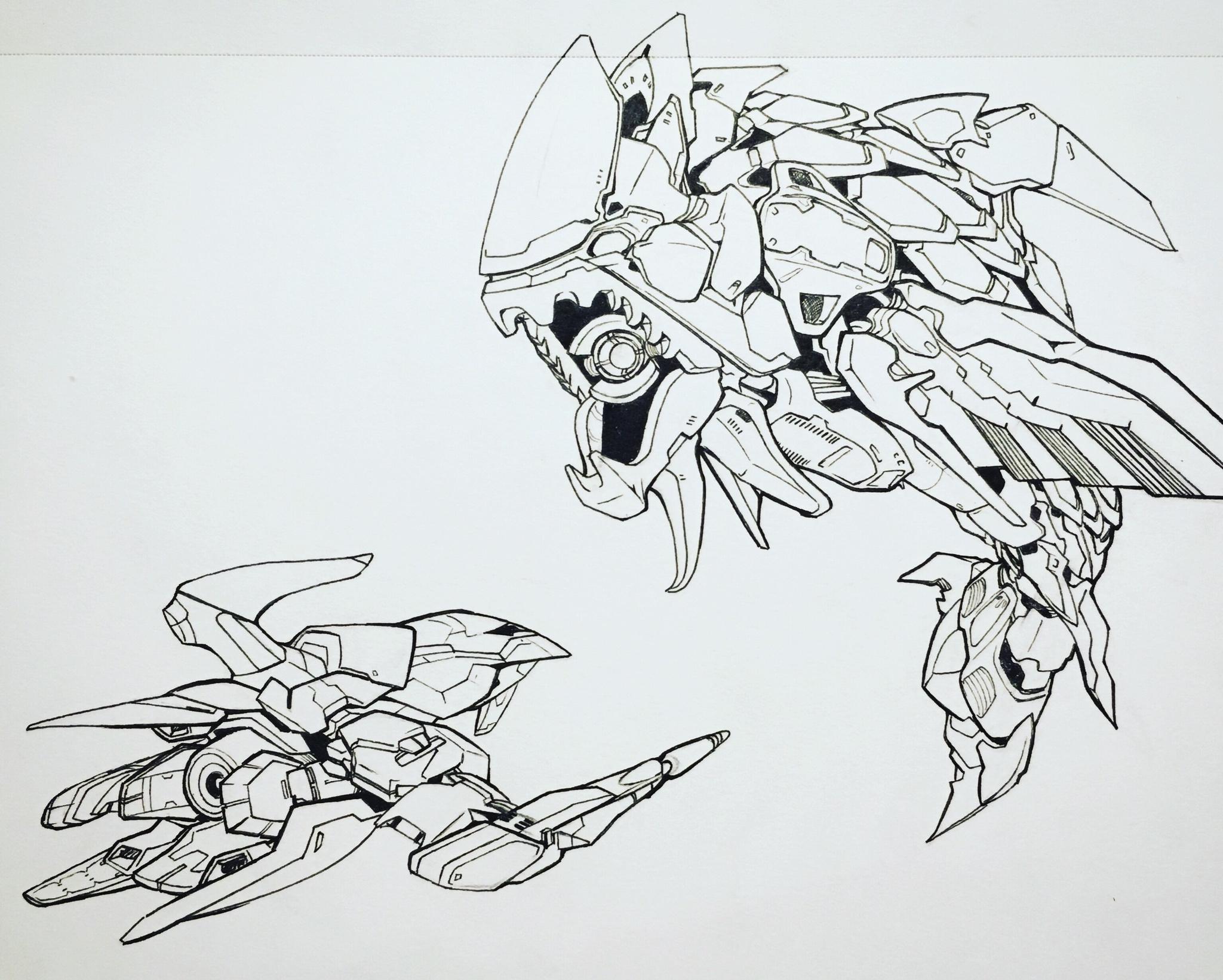 Dude, that is gnarly in the best way.

Alex Krokus summed up my Inktober thoughts for 2020.

That's too bad, but I don't blame anyone. Things are... things, lately.

And thanks! It was fun to draw. 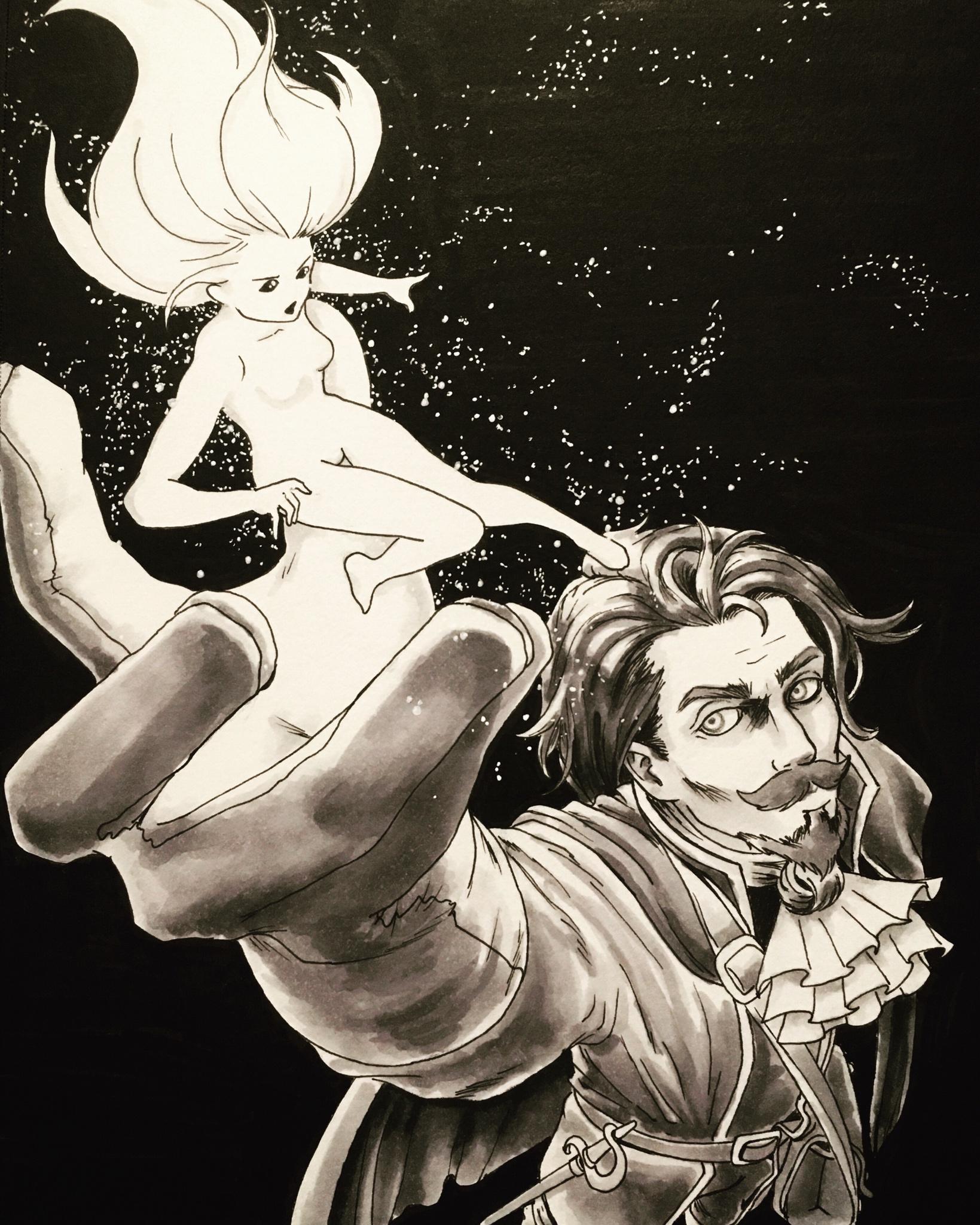 The dude on the right is my current DnD character, Castor Ferdham di tal Baulterasmyr, master conjurer. His wisdom is 6, and he is often distracted. It's nice, because when I miss something because I'm not paying attention, I can just play it off as role-playing.
Last edited: Oct 5, 2020

I am amazed at how different in style those two pieces are. So cool.

Love seeing the new work Regulus. I can usually manage 2 or 3, and I never look at prompts. I'll try and do a lil.

I like seeing anybody take part, whether they follow the official prompts or go for all 31 days or not. I hope you get a chance, I'd love to see more of your work.


Violentvixen said:
I am amazed at how different in style those two pieces are. So cool.
Click to expand...

Thanks! To be honest, "style" is something I've always struggled with. I would like to develop a consistent style, but I don't have enough motivation during the year to draw often enough to refine one. When I'm doing challenges like this, I tend to bounce around between a handful of different styles just because it's easier to keep things going if I mix things up a little every day.

That said, the one I did yesterday is pretty much in the same style as day 1, haha. I meant to color it, but ran out of time. 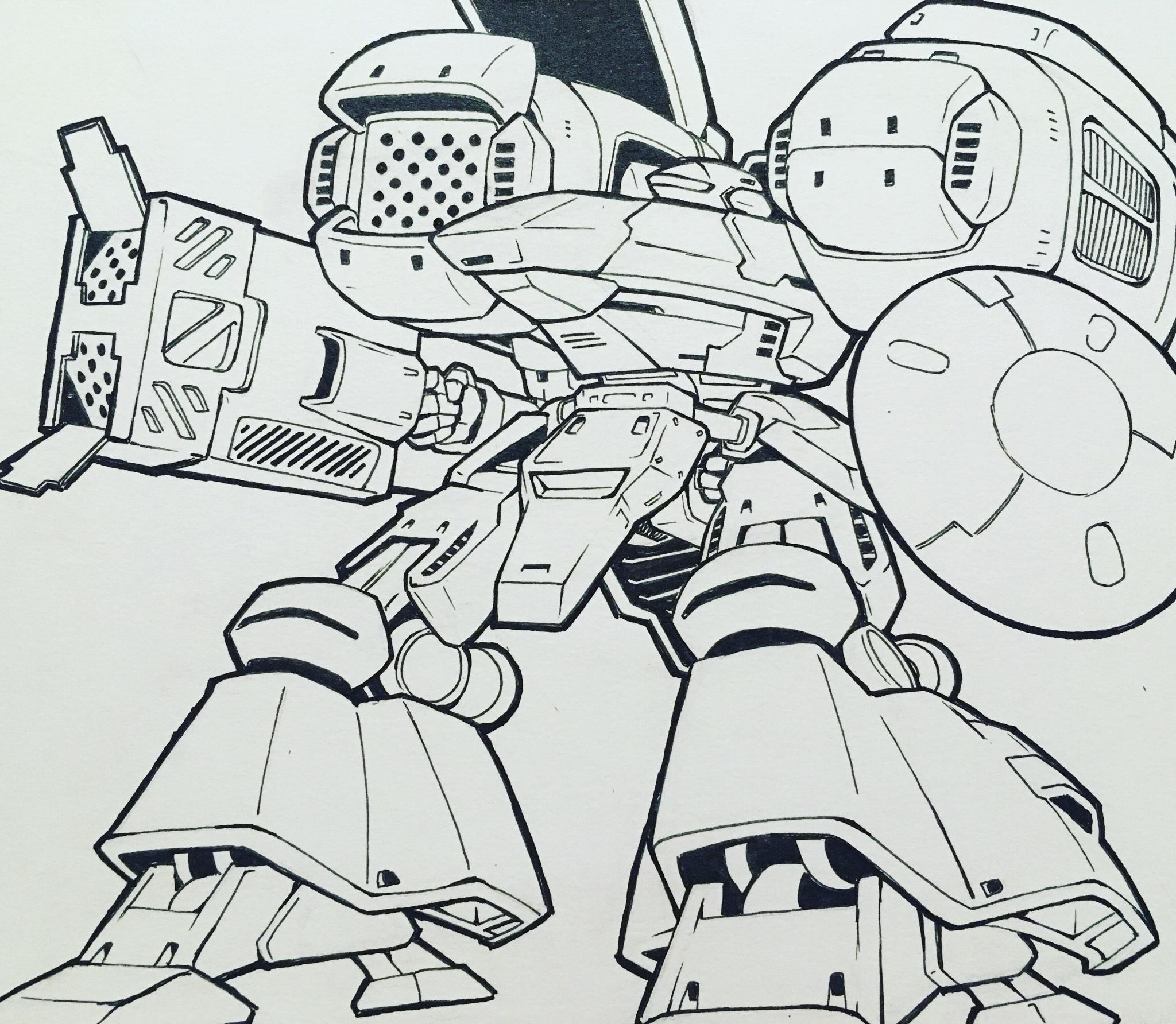 Bonus points if anyone recognizes this. Hint: It's technically from a shmup, but this iteration of the design has never appeared in one.
Last edited: Oct 5, 2020 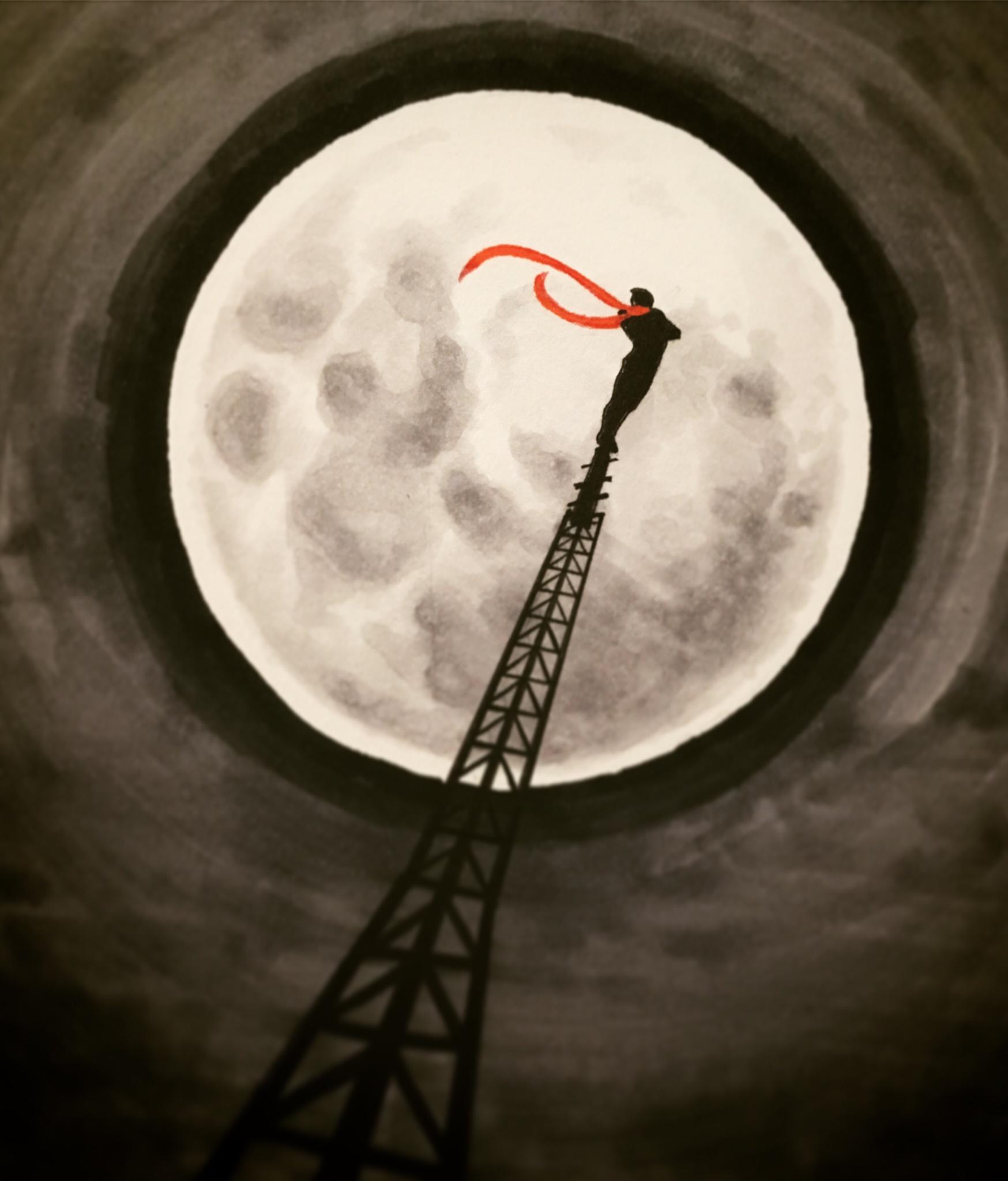 Nice mecha for day three! As Zoda would say, STRONG MACHINE. Love the others as well.


Regulus said:
The dude on the right is my current DnD character, Castor Ferdham di tal Baulterasmyr, master conjurer. His wisdom is 6, and he is often distracted. It's nice, because when I miss something because I'm not paying attention, I can just play it off as role-playing.
Click to expand...

Brilliant. If I ever get back into a tabletop campaign, I"m gonna have to roll up a character with severe ADD.

I'm have a very strong feeling that is a variant of a boss from Einhander. Maybe the one you fight on the space catapult.

I stayed up way later than I meant doing this one. I finished the lineart 11:30 and was just going to post that, but decided to shade the middle of the blade to see how it looked. Then the rest just happened. Whoops. 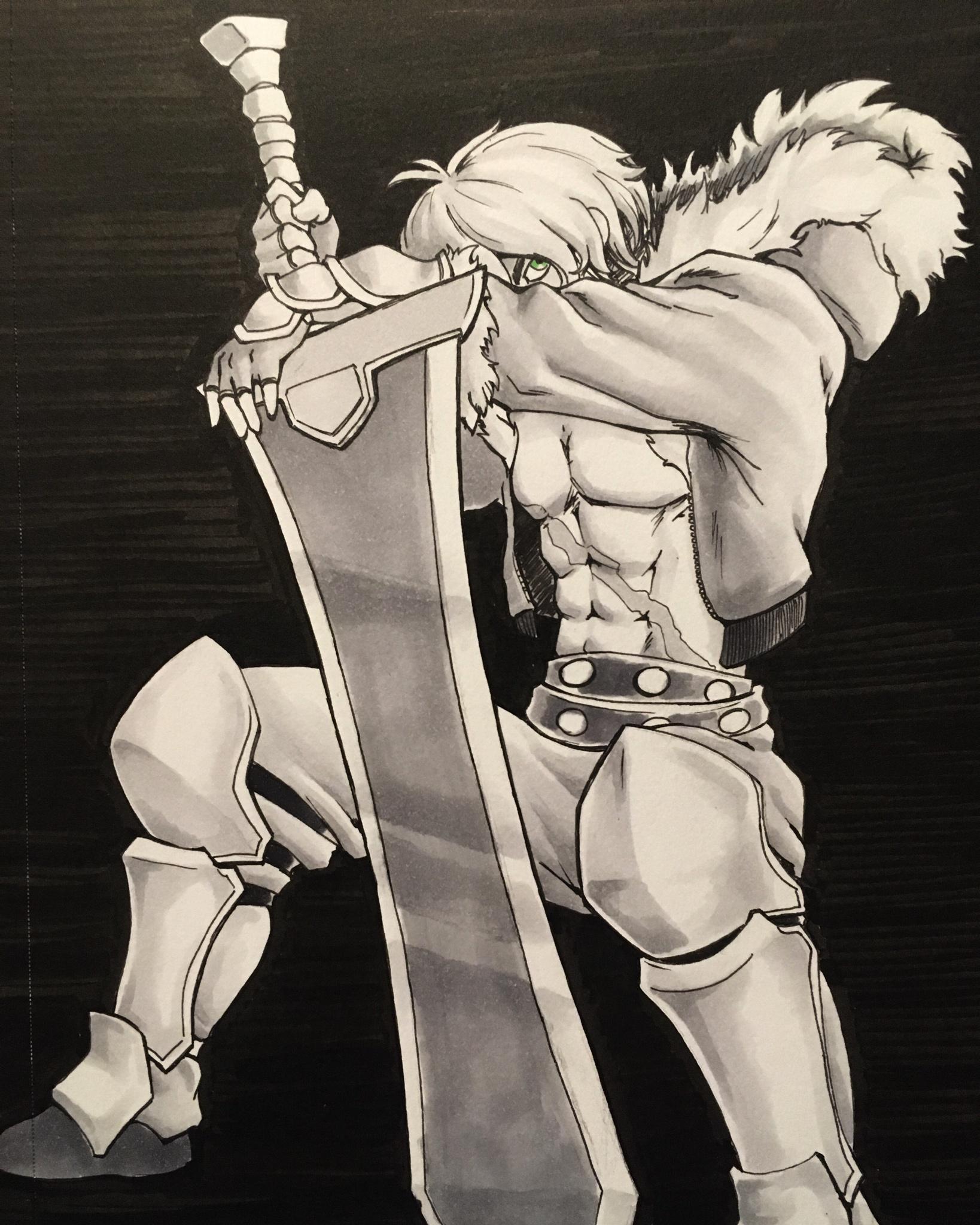 In retrospect, I maybe should have drawn whatever object it is he's supposed to be sitting on, because it just kinda looks like he's doin' squats without it. 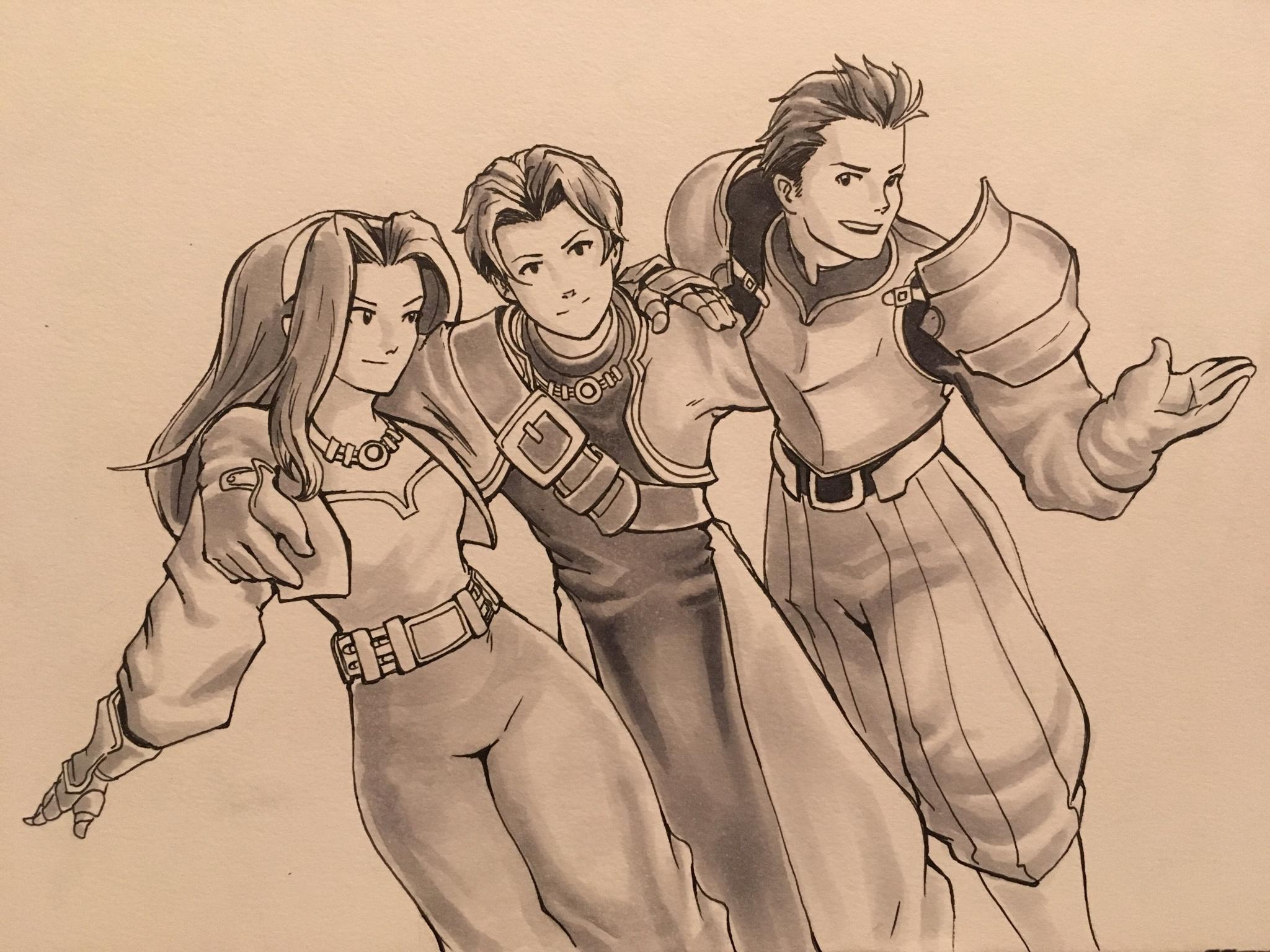 Yeah, there are no rodents. Unless you count Vyce.

It was Tactics Ogre's 25 anniversary today, so I decided to do a picture of the main characters. They're not usually allowed to be happy.

Man, baggy pants sure are popular in Valeria, aren't they?

These are amazing, and I'm TOTALLY NOT JEALOUS OVER HERE

The linework on your mechs especially is gorgeous.

Continue to be impressed at your versatile style Regulus! Looking forward to seeing more!


That Old Chestnut said:
The linework on your mechs especially is gorgeous.
Click to expand...

That's my "coloring book" style, haha. I'll probably go back and color these with Copic markers some day.


Mommi said:
I'm have a very strong feeling that is a variant of a boss from Einhander. Maybe the one you fight on the space catapult.
Click to expand...

Missed this before. It's actually a Tabrok from R-Type (Tactics design), but I definitely see the resemblance to Ausf D Durer (had to look up the name, haha). Einhander has a lot of great mechanical design and I could definitely see myself drawing something from it. 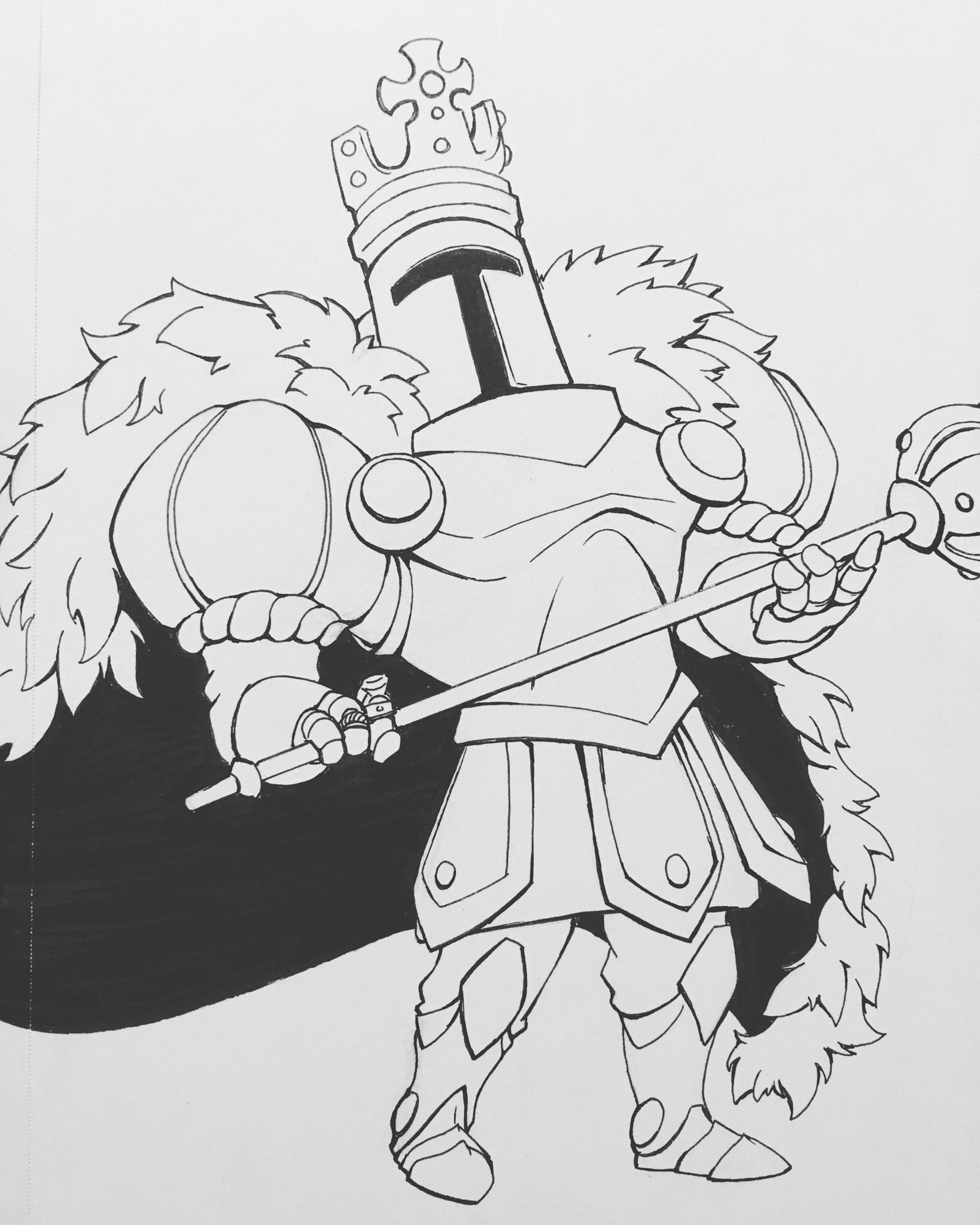 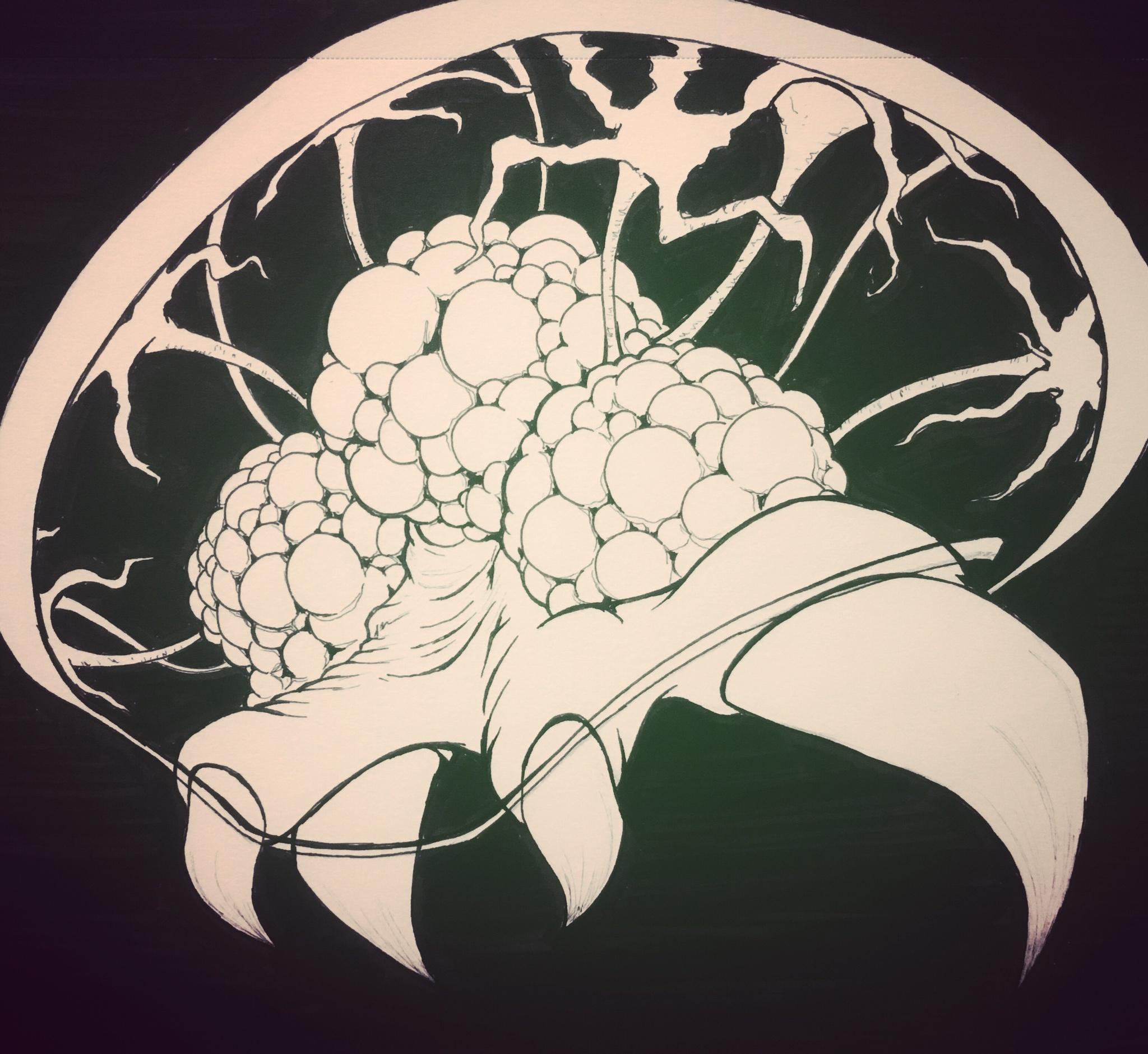 Also: someone remind me to stop drawing into the perforated edge of my pages.

That is beautiful. Dumb question since I've never really used ink: Is there a technique to colour in the whole background like that? Or do you just spend the time doing it? I would lose patience I think.

There are a couple of ways that I do it. I typically use a brush tip pen to stroke the outlines so I don't risk going over the linework when filling the background, then I either use an actual brush and some undiluted india ink to fill the rest or I just keep using the brush pen in parallel strokes. The former is faster and tends to have heavier coverage, but it can warp the mixed media paper I use. The latter often leaves a pattern in the background, though, which you can probably see in some of these. I usually adjust the white/black balance in these photos so it's less obvious.

Just using a brush for broad areas is probably the better option, but I don't always feel like dealing with the cleanup, haha. 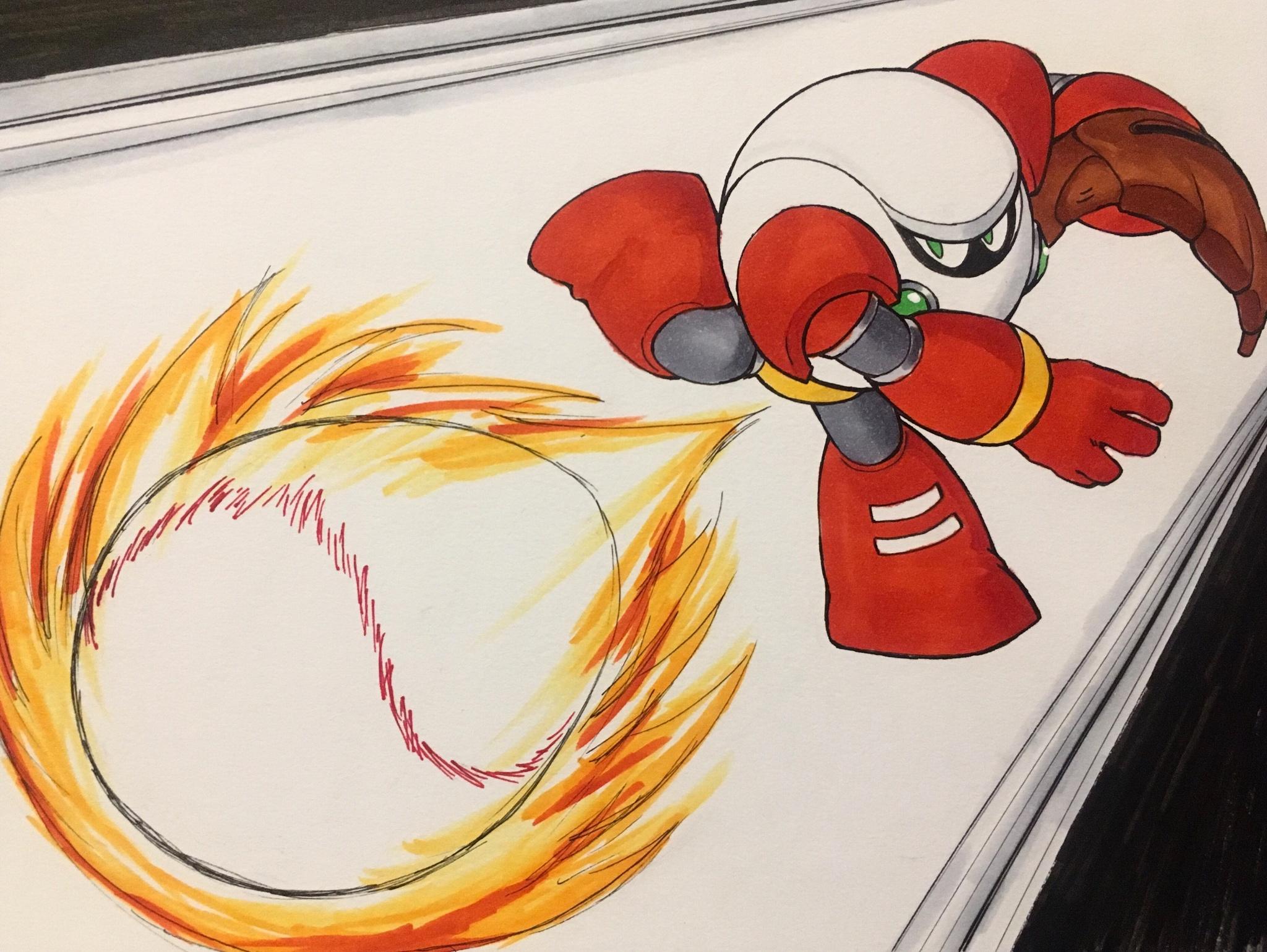 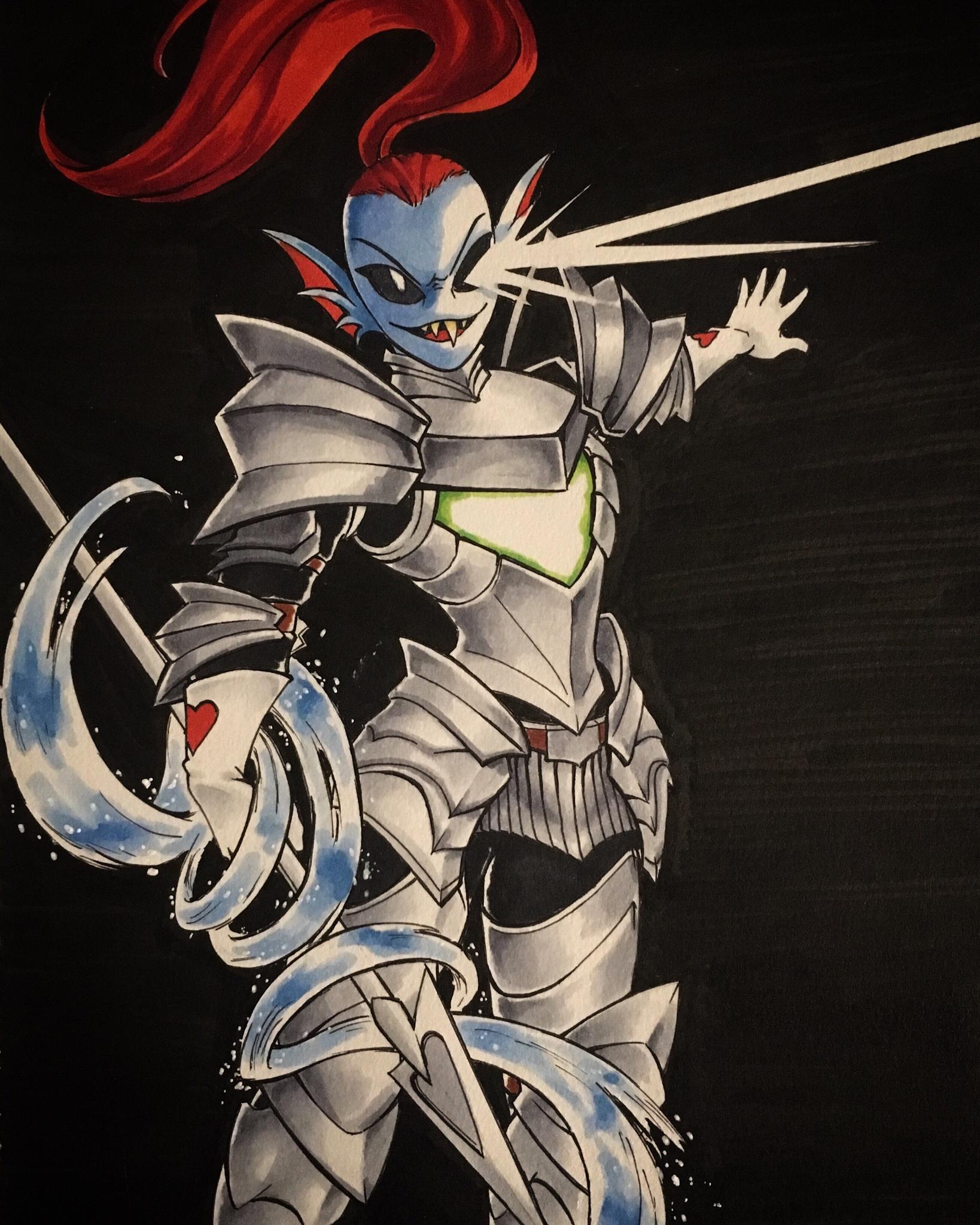 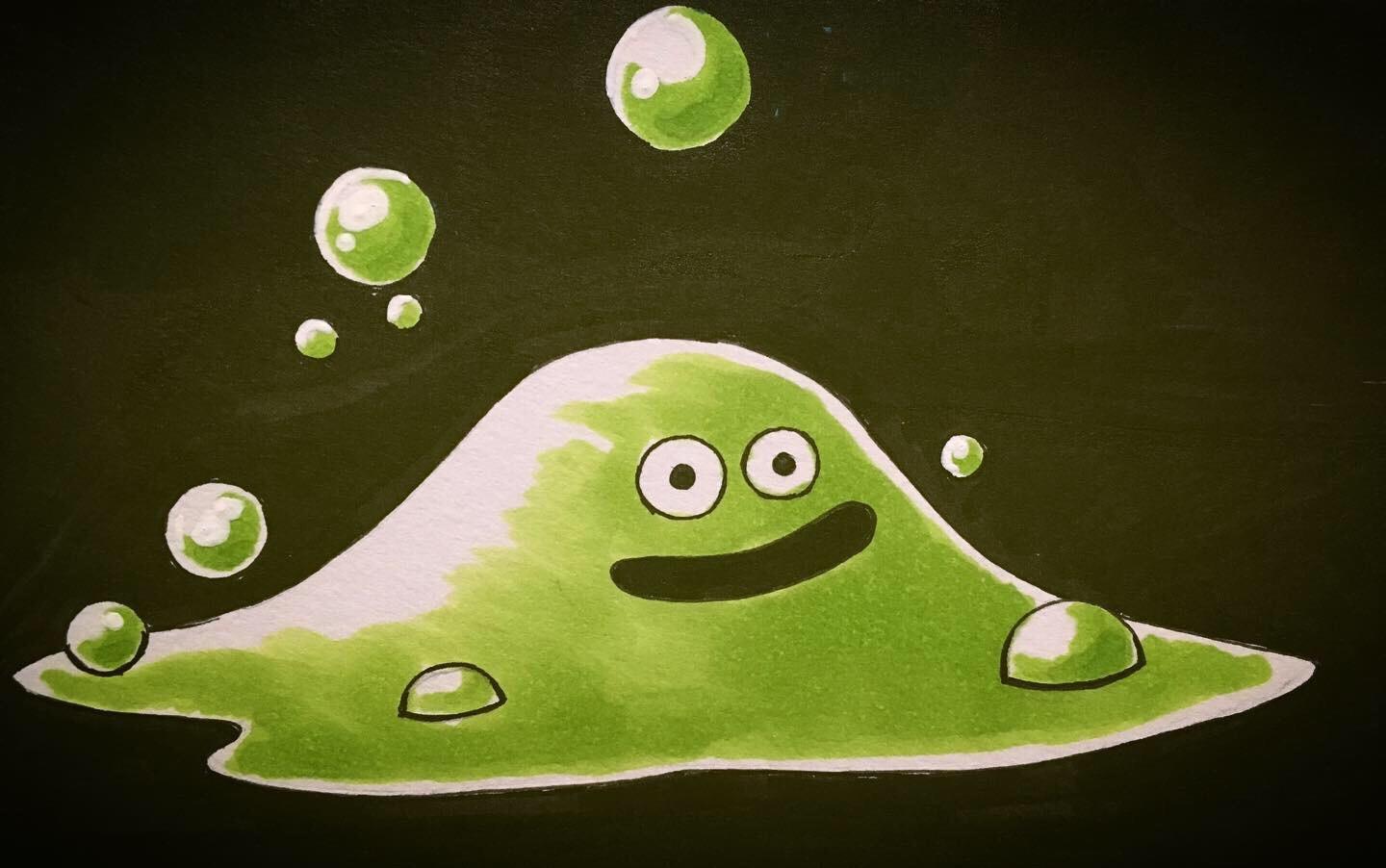 This is unfair to Bubble Slimes. They're poisonous, but not really disgusting? Here's the original I was working on: 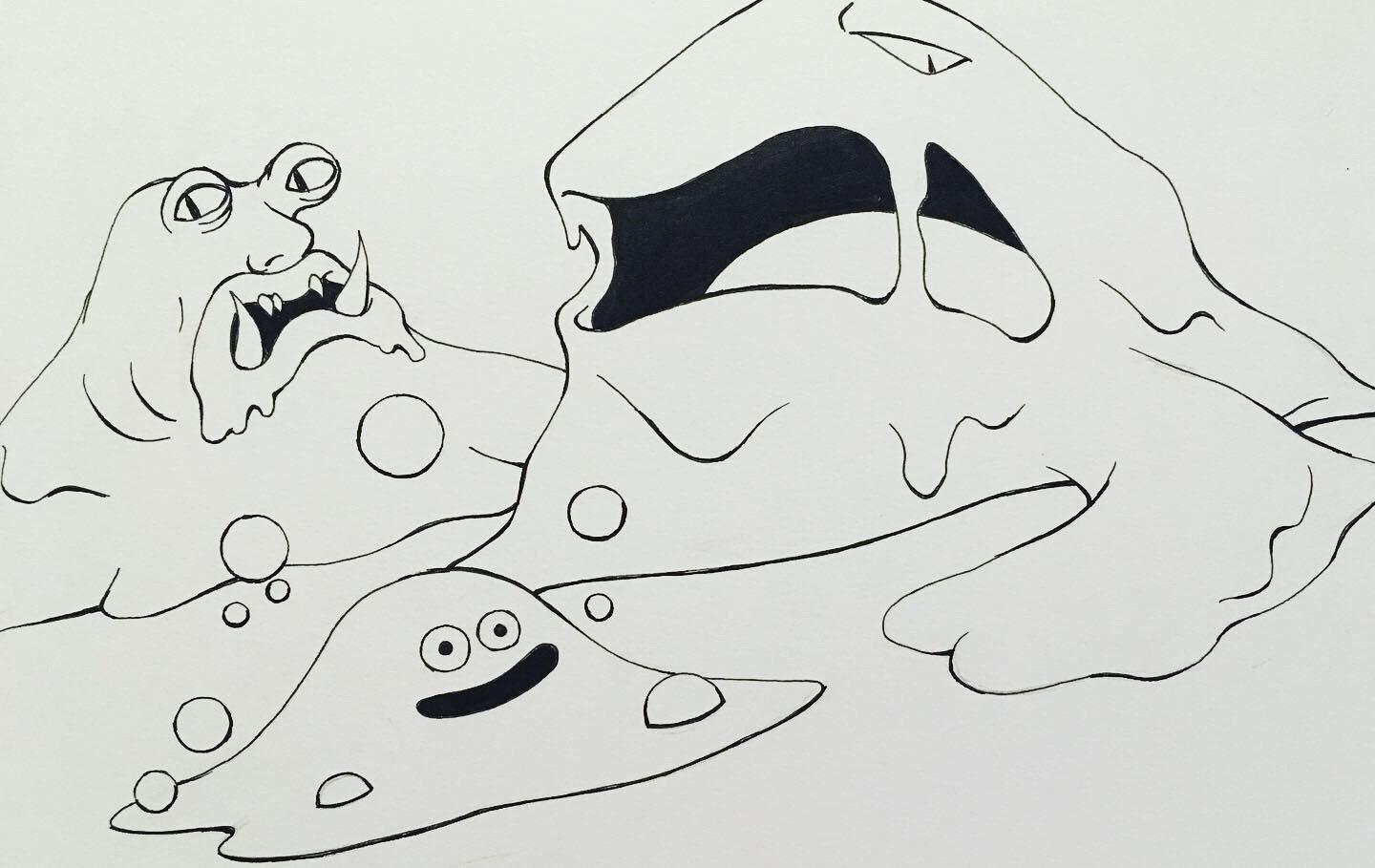 The real "disgusting" part is what that Muk looked like when I attempted to color it. I was going for a style reminiscent of Ken Sugimori's Gen 1 and 2 Pokemon art. I laid down a soft layer of pink and things were looking pretty good, but I just could not get my amethyst copic to blend at all, (even with itself - it ended up really streaky). I kind of salvaged it by just saturating the whole thing in purple and then adding some definition with even darker purple shadows, but I was really unsatisfied with the aesthetic so I just covered it up and posted the Bubble Slime.

How do you get the glowy green effect around the slime? Mixing the inks?

Also I love the Undyne one.

Heh, that's more an artifact of the lighting I took the photo in. There's a slight vignette that I added in instagram to make it look more like a glow and to reduce the effect my poor lamp lighting has on the uneven blacks (you can see this in the Metroid pic as well).

That Undyne is amazing! Actually I love all your art, so please keep posting it!

Hard agree on all points

Thanks for all the comments everyone, I really appreciate the support. 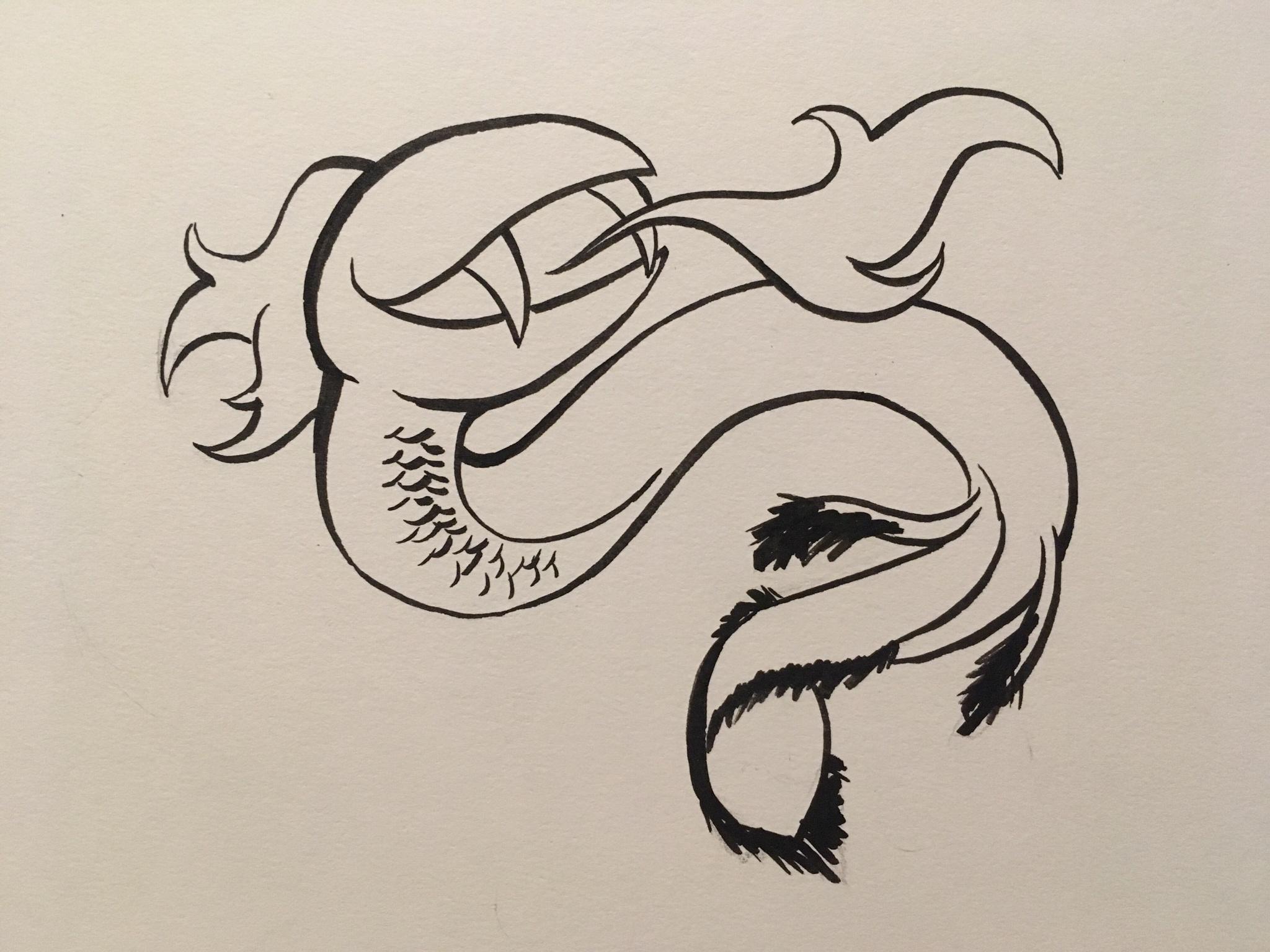 After starting up and scrapping 3 different drawings for this prompt, this is the one I ended up on. I was thinking "more slippery than an eel", even though the Kraken is not really much of an eel (or, let's be honest, a kraken). I used a Japanese ink brush pen that I bought a few years ago for this.
You must log in or register to reply here.
Share:
Facebook Twitter Reddit Pinterest Tumblr WhatsApp Email Share Link
Top