I made a thing

Silversong gave me her scones recipe, but unfortunately I didn't write it down, so when I decided to make scones this morning, I was desperately searching google for one similar to it. And came up with one that used a lot more flour than hers *_* so they came out a little dry, but still perfectly edible! Pics to come

My dad got a scone recipe from a relative in Ireland. It involves measurements such as: a handful of flour. Somehow, the scones always turn out to be excellent.

The recipe I should have used is:
Heat oven to 450F. Mix dry ingredients, add liquid and mix as little as possible. Form and bake for 15 minutes.

The one I did use was

the chocolate chips were my own addition-- a handful

Used Silver's recipe (first above) and it came out much better! Although honestly, I think the worst thing I did with the first batch was not mix the dry ingredients in together well enough. There were a lot of patches of just flour or just salt or just baking powder.

(1) I tried making these chocolate chip cookies that use tahini instead of butter to use it up. They turned out well. Very gooey.

(2) For some reason for a long time I never used fennel when I made a tomato sauce for spaghetti before, even though I love fennel???? But then I started adding it and it tastes great. The biggest improvement since I realized that it's absolutely worth it to spring for whole peeled san marzano tomatoes.

ooh, I do like some fennel. I'll have to look for it on the shelves when we go shopping next

Was the intent for anyone to be able to post here when they've made a thing?

The SO and I have been trying to cook more regularly, and tonight's dish went quite well (which stands to reason, as it's our second time making it, but it didn't occur to me to take pictures before). It's baked feta with kale and chick peas:

We tried it paired with some fresh baguette this time, but I think it paired better with the pita bread that we used last time. Still, very tasty, and highly recommended!

Chickpeas are an underrated food. Also, can we go back to calling them garbanzo beans? That's a funnier name.

She's pretty insistent on having protein in all of her meals, and as someone who hates handling meat, they're my favourite go-to.

estragon said:
I tried making these chocolate chip cookies that use tahini instead of butter
Click to expand...

Update on these cookies: They were even better on following days. They stayed very soft and the tahini flavor retreated into the background as a slight accent giving them just a little something special that you might not be able to identify. (When they were fresh out of the oven and barely cooled the tahini flavor was much stronger, which I liked but could see being divisive.) If you like soft chocolate chip cookies and find that other recipes end up getting too crispy after the first day, apparently using tahini instead of a butter is one way to achieve this. If you don't like the flavor of tahini, maybe wait until day 2 to eat them. 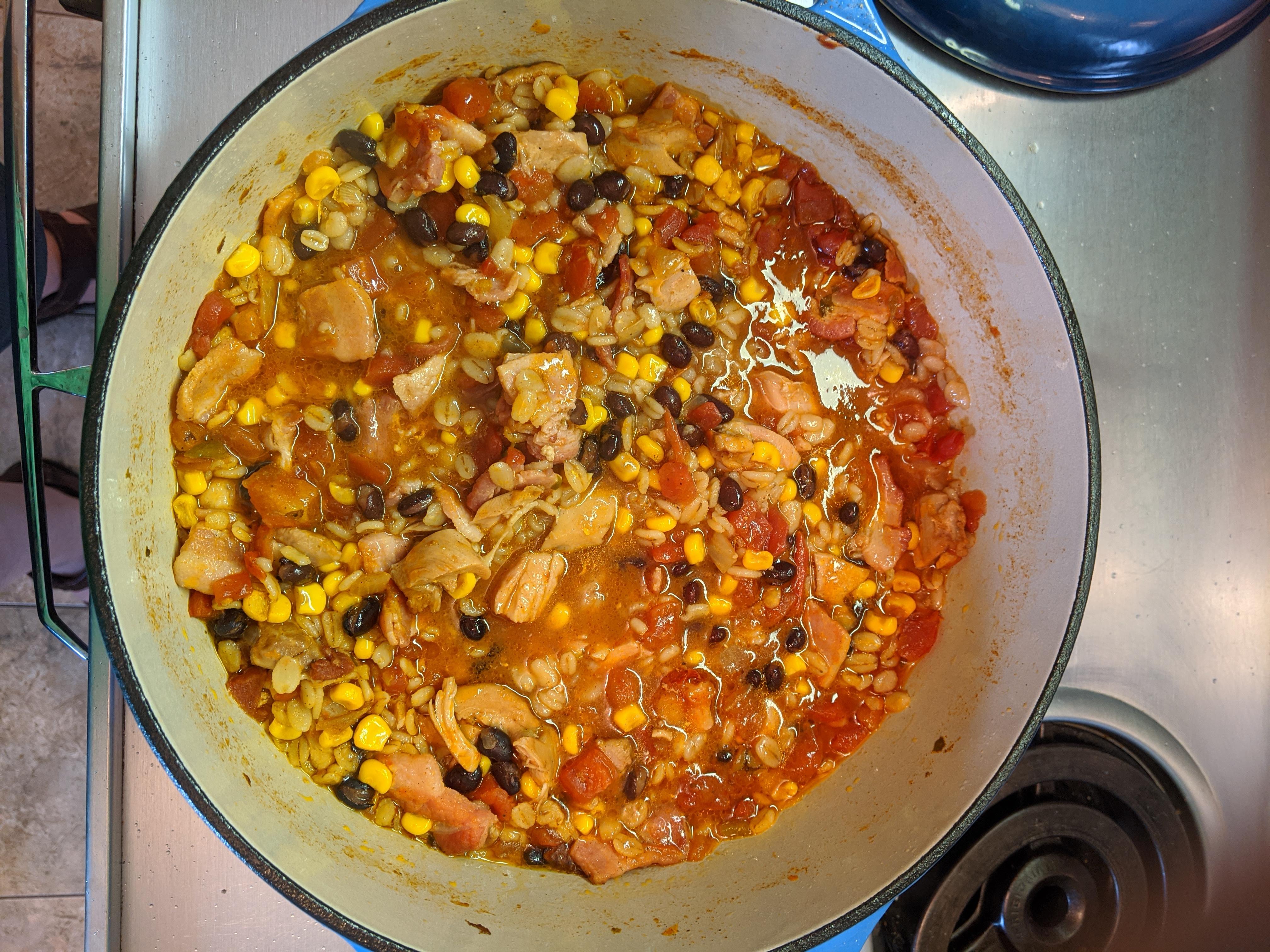 we roasted some chicken last week (amazing) and I cooked down the bones and bits along with the bag of vegetable scraps that I'd been collecting in the freezer for a few months into stock. Today I took the stock and cooked it into some potato soup. I was dubious about the quality of the stock, but it came together in the potato soup.

Bone in chicken breast roasting (adapted from bitman's how to cook everything):
butter/oil roasting pan, add some garlic cloves
rub the breasts down with the oil on both sides
season chicken breasts (I used herbes de provence, and it was fucking divine) over and under the skin and roast at um, either 400 or 450 skin-up for about 15 min
slice up some onion and mushroom
flip chicken, season the side that's exposed now, add onions and mushroom (and prolly more oil) and return for another 10 minutes
steam broccoli with some compatible seasonings
flip chicken, season once more, and if you're nervous about the mush and onions and garlic, you can remove them so you can actually eat them, cook until interior reaches chicken temp (165?), Maybe 5-10 minutes

potato soup (same)
chop up ~3 medium potatoes (I used gold) into little rectangular prisms
slice up a couple of leeks (he said 3, but I only had 2, but they were pretty big, so idk. substitute with onion if you want, prolly)
melt 2 tbsp butter and sautee the veg until softened, ~3 min
add 4 cups stock/water and boil forever (or rather, gentle boil for ~20 min)
season with salt, pepper
Halfway through that 20 min of bubbling, I was unconvinced about the amount of potato, and I like a little bit of chunk in my potato soup, so I chopped up a couple more smaller potatoes into bite sized pieces, and steamed them in the microwave so they could catch up to the ones in the pot.
Immersion blended everything in the pot
Added the microwave potatoes
Re-seasoned, more salt, more pepper (didn't add any salt to the stock, so I was starting from 0 basically)
Simmered for another 10 minutes so the flavors can "get to know each other", as babish would say.
Ladle out, add splash of heavy cream, garnish with something green to make it pretty (or green onion for add'tl flavor, although honestly I kinda thought it was too much leek anyway)

Cooked a big batch of so-called swamp soup. The light yellow bits are cubes of Swiss cheese that melt down to delightfully chewy gobs when you pour the hot soup over them. Recommended.

Kale salad with kale massaged by hand, pomegranate, goat cheese crumbles, candied bacon, and homemade dressing. Same as I made last Thanksgiving, with the crucial difference that I didn't burn all the bacon this time.

That looks stellar. At first blush I thought the bacon was grapefruit, which would also be interesting. Especially if you are on medication. But that's the bad kind of interesting.

I would not have thought to put pomegranate with bacon but it sounds amazing.

We got some silken tofu after a six hour roundtrip drive to hit a bunch of Asian grocery stores and I'm having fun trying new things with it.

About a week ago I made an edamame tofu soup which was really nice as an appetizer. Recipe is from Asian Tofu by Andrew Nguyen.

Tonight I made soondubu jjigae and it was wonderful. Only made half a batch because a full one would use up almost all the tofu we got, but it was great and warm and so full of flavor. Definitely making it again, and I bet it will be just fine with the soft tofu I can find at local stores although I'm sure silken will be preferable.

Then for dessert I made a tofu version of blancmange, which was kind of meh but definitely fun to try. It was also from the Asian Tofu book.

Last week, I developed a chili recipe that fits inside the rather confining guidelines of Death Gym Diet (for lunch, ~6 oz of low-fat protein, ~6 oz of carbs, and ~6 oz of vegetables, minus highly sugary specimens like carrots, peas, corn, etc).

For 2 portions, I used

10 oz 96% lean ground beef (aka the leanest I've ever seen in a store; could use ground turkey instead, but I'm squeamish)
1/2 large onion (6oz)
1 can (15.5oz) red kidney beans
1 can (14.5 oz) diced tomatoes
1 cup of mushroom broth (I think this is like 1 tsp of mushroom powder)
your favorite chili spices (salt, pepper, paprika, chili powder, cayenne, garlic powder, cloves, etc)

Did the whole thing in the instant pot in the interest of time and dish-washing saving.

Sauté the onions until they're starting to turn translucent
Pop in the ground beef and some black pepper until that's about browned
Glomp in the tomatoes, beans, and mushroom broth, along with your seasonings
Hit the chili/bean button and give it about 20 minutes active cooking time.

I needed to add a little more water after the first batch, mostly because I had forgotten to replace the o-ring, whoops. I did also make it in a stockpot when I wanted to cook two double batches at once, but I kinda just left it on the stove on simmer for an indeterminate number of hours, so I can't advise what the ideal cook time is.

It was good enough to eat all week, although there was some resultant flatus. The caulicous has gotten a good review, but the scallops are definitely not going to be an all week thing. They were surprisingly expensive, with little price difference between fresh and frozen.

I made spicy tantanmen ramen this week and it turned out pretty good. I feel like the ramen place I go to puts something extra in there and I can't quite put my finger on it. Has anyone else cooked that at home before?

haven't had tantanmen to say whether that sounds complete or not. I would guess something like garlic or truffle oil maybe, since they seem to have the chili oil covered

This week's lunch recipe is salad with chicken. I made breadcrumbs last night using marjoram, black pepper, and garlic powder. The chicken I cooked with a teriyaki-ish sauce modeled after The Flame Broiler's Magic Sauce: soy sauce, sake, splenda, ginger, cornstarch. I don't think I made enough of it for the amount of chicken I was using (no measurements, only seat of the pants), and I had to keep deglazing it with water to get good coverage. Turned out really good, though. The rest of the salad was mixed green lettuce and romaine, tomatoes, cucumber, onion, oil and vinegar, salt and pepper.