Sarge said:
EDIT: Figured I better check and make sure I pulled the batteries from mine, and I did, but daaaaang, I forgot that it took two CR2032 batteries. Yikes.
Click to expand...

Supposedly it's the RTC component that drains the battery so much but what I wouldn't give for a slightly more modern version. Even if it has to resort to banks of memory in order to improve capacity (which might actually work to its advantage -- having separate banks for VMU programs vs. standard save data)

Public Service Announcement: Someone botched a clone of the GCLoader and is trying to offload them.

Thought I'd post a few pics of my GDEMU install for posterity. 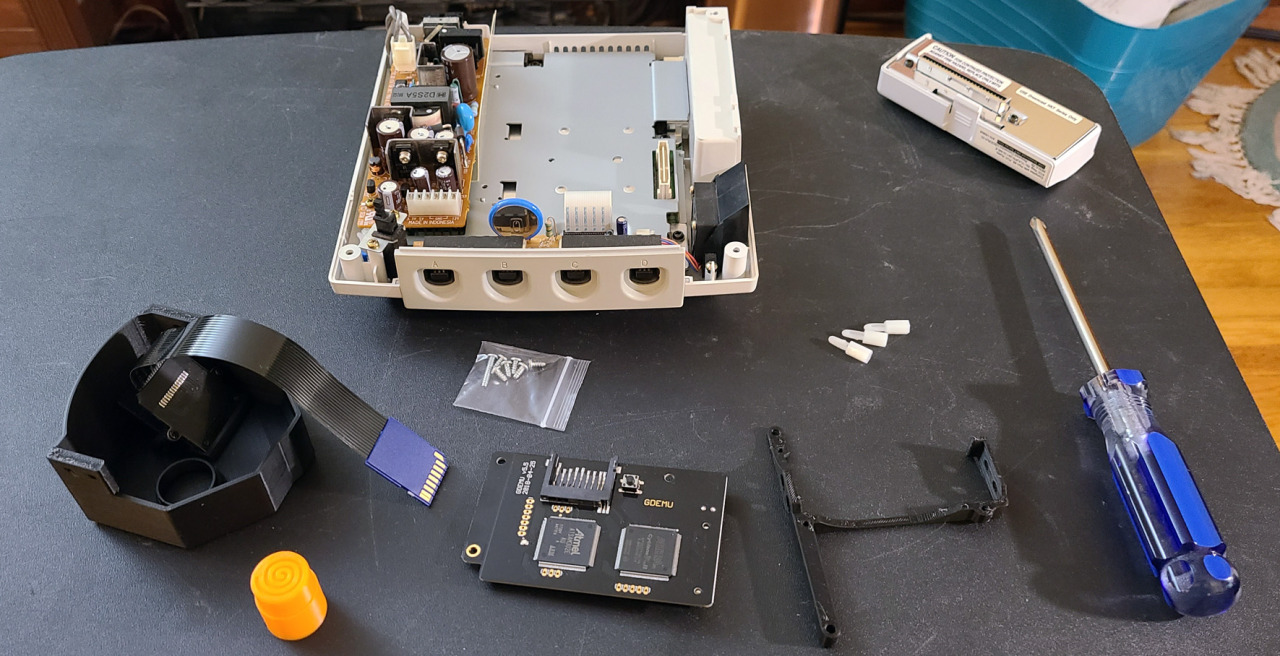 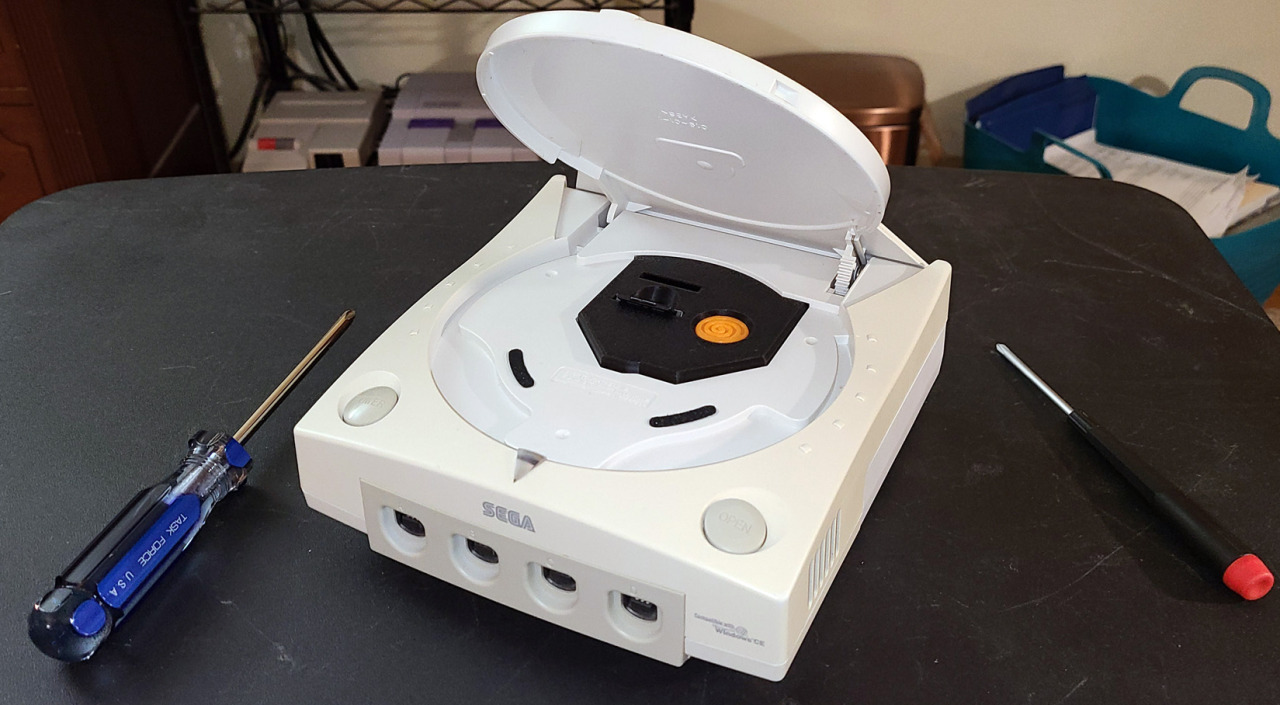 Love how clean the Laser Bear mount kit looks once it's all put back together, almost like the original GD-ROM drive.

Yeah, damn. That looks slicker than the Bit District one, for sure (which still looks better than nothing).

Given that these aren't for sale very often (last batch was up in November, prior to that, in 2019), I'd thought I'd post here that the Wonderswan Flash Masta carts are going to be in stock again soon according to the guy who makes them:


https://twitter.com/i/web/status/1358555763082371072
I know you don't have a Wonderswan yet, @Tegan, and may not care about flashcarts - and fair enough - but being able to play some of the fantranslated stuff on original hardware is why I want one so bad, so I thought I'd give you a heads up. If I can grab one - be it Tuesday or some time after that, whenever they go live - I'll post about it here.

This is the store for them, btw. I'll probably pick up one of their headphone adapters for the WS while I'm at it lol
Last edited: Feb 7, 2021

I don't have the money right now. =n=

Yeah, it sucks they're so ridiculously expensive. The day mine comes in the mail, Krikkz will probably announce a much better one for the same price, too lol

Ouch, that is pretty expensive, especially for a system that... yeah, I don't have a Wonderswan. They look super cool, though. If I end up replaying the SaGa games, it should probably be through the remakes. (I did try a fair amount of the DS version of SaGa 2, but I have to admit that I ran into a wall in it and stopped playing. Ashura was a lot tougher than I remembered from the Game Boy game.)

Kazin said:
Yeah, it sucks they're so ridiculously expensive. The day mine comes in the mail, Krikkz will probably announce a much better one for the same price, too lol
Click to expand...

That's pretty well in line with most flashcarts. The only one I can think of that comes in considerably lower than that is the EZ Flash Omega for GBA.

And boy, I don't even want to tell you what I paid for my Neo-Geo MVS Darksoft cart.

This MLiG video inspired me to try Napple Tale: Arsia in Daydream and its fan translation on my GDEMU. However, it seems that this particular translation patch was designed to be applied to a .CDI-format image of the original Japanese game. As a bit of background, most Dreamcast disc images are ripped as either CDI or GDI format. GDI rips are essentially a 1:1 image of the original disc, including any dummy data, whereas CDI rips are usually compressed in some fashion (typically in order to fit onto CD-R/RW burnable media). I prefer to use GDI images when possible since I've got plenty of space on the 256GB microSD card inside my GDEMU, so I decided to hunt down a GDI-compatible patch. Fortunately someone on Romhacking.net named "Master X" posted their own custom GDI patch in this thread, which I was able to apply using Delta Patcher.

The game itself seems like a solid action RPG, but it also has a very slow start with lots of NPC introductions and dialogue. Looking forward to digging into it a bit more over the weekend.

I got my Neo Geo Pocket Color flashcart from Stone Age Gamer in the mail today.

I was worried that the flashing process would be annoying, but I literally loaded up every rom that exists for the system on my micro SD card, and none of them are bigger than 4 MB, and you can hold up to 15 MB max at a time. Once the roms are flashed, they load almost instantly. It actually works really well and if the Wonderswan flash cart that I want to buy so badly works similarly, I'll be quite satisfied (though I think that one has to connect to your computer everytime you want to flash roms to it, which isn't the case here, it just flashes off the micro sd card).

Saves just seem to work, though I don't know if they're saved to the cart or SD card or what. Probably the sd cart if I had to guess? In any case, flashing roms doesn't take very long, maybe a minute or so for a 2 MB game. I'm quite happy with it. I like it enough that I'll be selling off my NGPC games, as I don't really want to have a cartridge collection anymore...

Yeah, that sounds a lot like the old GBA flash cart I used to run, a FlashAdvance 256M Pro. There were a few games that could take up the whole cart (oh, hai, Mother 3), but most times you could squeeze four or five on there without reflashing. Of course, as you say, it's much nicer when you don't have to hook up to a PC to reflash, you can just do it straight off the SD card. I still remember how fiddly my flasher could be back in the day. Ah, good ol' parallel port cables...

I feel so pampered with my Gameboy, Gameboy Advance, and Game Gear Everdrives with their instant loading lol. Still, the NGPC one is better than I thought, and I doubt I'd replace it even if Krikkz came out with a superior Everdrive (unless I run into save compatibility issues, or something, on the one I have now, though from what I've read online that's not a thing).

I have one of those old Tototek Game Gear flash carts (that I have misplaced, ha) that has some compatibility issues. Basically the same ones as the old carts KRIKzz used to have. It's just as well, though - I haven't modded my Game Gear, so the experience playing on it is less than optimal. I even have the Majesco re-release. Yeah, it's better than the original screen, but compared to... well, pretty much anything these days, it's a terrible experience. Hard to believe I played through the entirety of Defenders of Oasis on that screen.

Public Service Announcement:
I was having a weird issue with my XStation. It wouldn't pick the right game. Like... I would pick a game, and a different game would boot. This happened with almost every game, and it was always the same wrong game (often off by one entry). So, after a bunch of looking and finally realizing I should just check the issues section of the Github, I realized that it was likely a partial file or something from a failed unzip.

It was actually worse in some ways, because I think it's going to be something others will see. The pre-patched version of Policenauts you're likely to find out there (Archive dot org) has an M3U file stuck in it that emulators apparently use to find where the cutscenes are or something. The problem is that the XStation doesn't know what that is, but knows it's a media file, so IT THINKS IT'S ANOTHER GAME, and fucks up the list. So, yeah, if you get an XStation, delete that file from your Policenauts, if you download it from somewhere. Save yourself having to look through 700-ish folders to find the offending file.

Wonderswan flash carts appear to be going on sale either Thursday morning around 10 AM MT or sometime Friday, according to this. Hopefully they don't sell out before I can get one... I'll be working at that time and my luck I won't be able to grab one... I'm excited, though, because I thought I'd be waiting months and months for more of them to get made.

I really need to get a Swan Crystal.

The installation process is pretty easy, too, for the Wonderswan Color IPS mod, though I can't confirm it personally just yet.

Isn't the Swan Crystal functionally identical except for the screen? And the less charmingly-funky design, of course.

Functionally, yes, it will run any Wonderswan game. It supposedly has a less blurry screen but is still not backlit.

Woo, just pre-ordered the 21-pin Fenrir for my Saturn. Fun times ahead.

For anyone else interested, they're being sold by Castlemania games: https://castlemaniagames.com/products/fenrir?ref=w9_zngec1o_

Nice! Enjoy! Satiator opened a whole world for me!

I actually temporarily balked, thinking, "I don't need this." Then I came to my senses and ordered it. Sure, I can burn CD-Rs (and have), but that laser ain't gonna last forever, and the ease of use is going to be absolutely worth it. The Satiator looks amazing, too, and being able to install it without even cracking open the system is a huge mark in its favor.

I just put in an order for the 3DO ODE which, oddly, is USB with no other options, but oh well. Guess it's time to grab a big-ass thumb drive, huh?

Yep! Also, after the giant pain that was getting my PS1 card set up (the full set is way too big, so I had to go through the whole list and decide what to grab, game-by-game), I'm very glad that it's so small.

I bought the FXPACK Pro SNES flashcart today, now that I finally have a space to hook up my older consoles. Still debating if I want an N64 or Genesis flashcart. Definitely want an NES cart, but first I need to figure out what's wrong (if anything) with my NES.

Niiiiice. I've got the old model, and it's absolutely worth it. I think the only game I hope it supports at some point is Far East of Eden Zero. It's got pretty much all the major special chips covered, though, due to some fantastic members of the community.

@ShakeWell: Since you've been running the Satiator, how big do you think works well for a MicroSD card? I need to get one before my Fenrir ships, and I'm thinking 256 GB should be more than enough. But I definitely don't want to be tight on space.
You must log in or register to reply here.
Share:
Facebook Twitter Reddit Pinterest Tumblr WhatsApp Email Share Link
Top