I stopped watching the reboot close to the end of the first season largely due to being unable to find reliable places to view it online. But now that I sold my soul to the House of Mouse for Disney+ I can catch up on the first two seasons, and I can barely notice the creeping sense of dread accompanying the ever-growing media conglomerate owning more and more of popular culture. Hooray!

Anyway, I'm nearly done with Season 2, just the finale two-parter to go, and I'm sure it doesn't need to be said but this show is great. The reboot has worked shockingly well overall, and I love the way they sneak in elements of the old Disney Afternoon series (most unexpected: Gummy Bears). I've heard the first half of season 3 has even more, and when the show returns the fall there'll be a rather massive Darkwing Duck episode? I'll have to wait for Disney+ to get Season 3, probably after said season ends, but nevertheless, I'm looking forward to it.

One thread that seemed to be dropped in Season 2 I'm still not sure about: Back in the Duke Baloney episode we see that Flintheart swiped a money clip from Scrooge when he was a child, leading them to placing their season-long bet. Said bet seems to be resolved, but the money clip was never mentioned again, which is kind of odd given Scrooge's rather significant reaction to it. Was this just forgotten, or will it come up later either in the finale or season 3?

I am now officially caught up on Ducktales.

I don't like how egregious and pointless the cameos get, with the Rescue Rangers being the worst example, but I really admire how this show keeps taking stupid joke concepts like Huey and Launchpad's sports commentating and Dewey Dew-Nite and getting more use out of them in really clever, organic ways.

EDIT: oh also what the fuck happened to Penumbra and the entire race of moon people who are on Earth now?
Last edited: Sep 16, 2020

I am very happy that Ducktales now has three compelling girl characters which are both
A) Very different from one another, but believably friends, and
B) Not gender-swapped versions of the boy characters

Vi's the secret sauce for me. Her dry pragmatism is a nice foil to Webby's pure Leslie Knope energy, and she's less precious about Lena's feelings while still loving and supporting Lena. Also, man, Lena. Definitely the best new character of this show.

The Japan episode was legit great.

I was already chuckling, but her reaction to Dewey eating a popcorn himself was just priceless.

Penumbra's "I just do not wish to date an Earth... male" has got the ol' shippin' brain a-firin'.

Tegan said:
Penumbra's "I just do not wish to date an Earth... male" has got the ol' shippin' brain a-firin'.
Click to expand...

I mean they weren't so much giving hints as blowing up fireworks in the sky about it since their "Odd Couple" episode in S2.

The Halloween episode is out and it's so good. I'm extremely into all the old-timey monsters complaining about the stupid shit we're scared of these days.

okay... Was NOT expecting a Ring reference.

The Ring reference is honestly really out of place because that movie is 20 years old now and hyper-specific, whereas clowns and dolls work as both evergreen creepy concepts and as timely references to whatever you care to think they are (in this case, I assume Pennywise and either FNAF or Annabelle).

Well, I dunno. I think an obviously dead person heavily lifting themselves out of a well or pit and shambling while pointing is pretty terrifying even without knowing the reference. YMMV.

It's also just a really, really good episode, and a great ensemble piece.


Tegan said:
The Ring reference is honestly really out of place because that movie is 20 years old now and hyper-specific, whereas clowns and dolls work as both evergreen creepy concepts and as timely references to whatever you care to think they are (in this case, I assume Pennywise and either FNAF or Annabelle).
Click to expand...

I dunno, there was also a subtle Amityville Horror ref (the house, though the middle divider is much taller and wider, has the same loft) that the main audience would likely miss entirely, and the reference to the Overlook Hotel's "party photo" is considerably more obscure than the other Shining refs they threw in there.

But as a Ring/Ringu fan I REALLY appreciated how the witch actually cracked all her bones all the way up as she stood upright. Even within Ring lore, that's a laser-focused reference to Ring 0: Birthday!

I dunno if this is the start of a spinoff show, but I would be thrilled to see if both DW and Scrooge can time-share with St. Canard's very own Kingpin. Scrooge has got to face some smart, calculating competition on his level.

(Although with grown-up Kit and Molly eventually showing up, Shere Khan still has to be around to antagonize McDuck Enterprises, right?)

Glad to see Owlson has landed on her feet.

I’ve been pretty skittish about the lack of news about a season four, and worried that Gene’s remark in “Quack Pack” about “at least three seasons, plus spin-offs” was a meta wink that they’ll opt for a Darkwing spin-off instead. And, like, that’d be cool, Darkwing is fun, but he doesn’t hold a candle to Scrooge. 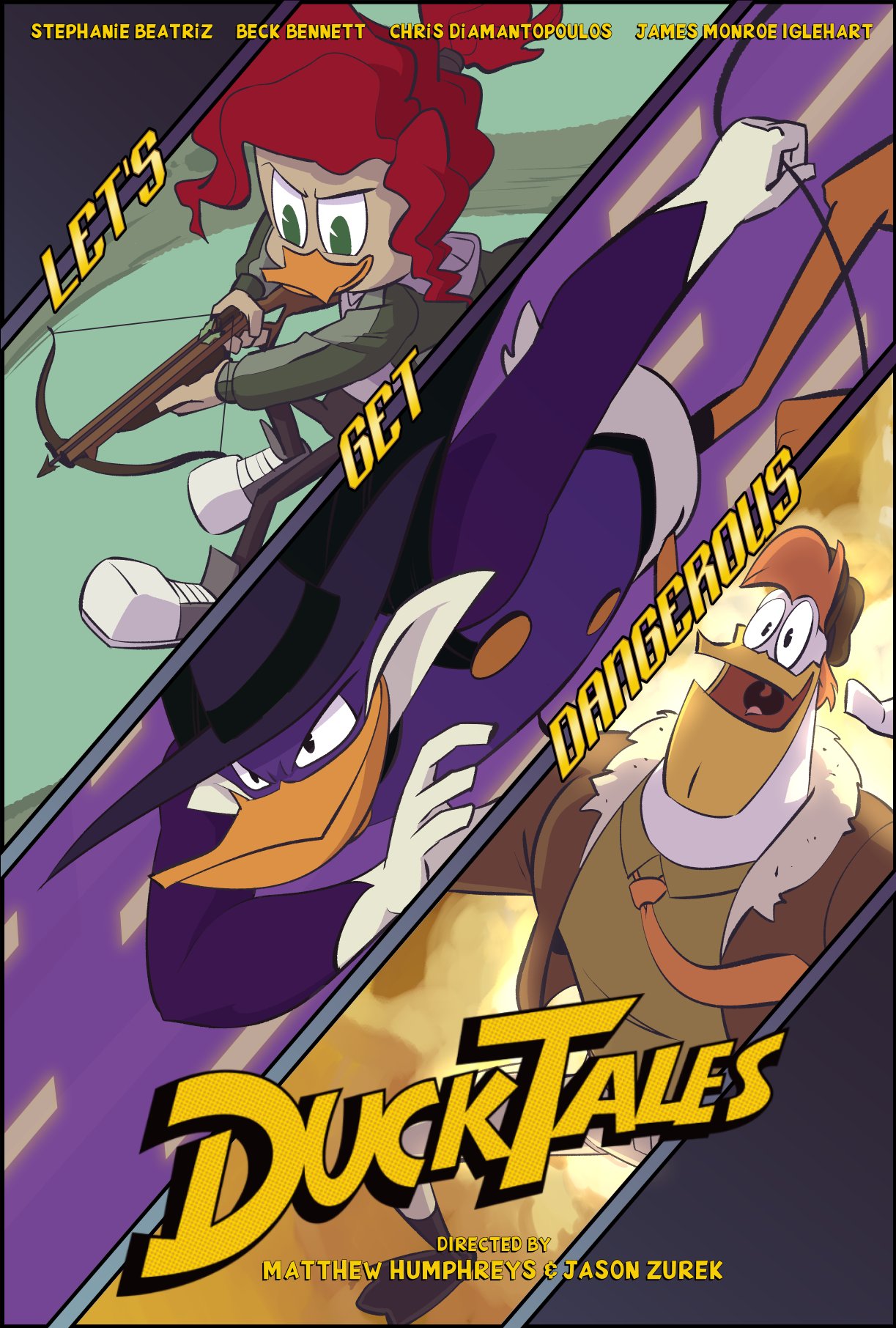 Soooooo, does this mean
Bonkers won't be showing up again in the series
?

Also love how
Darkwing is "I am better than Gizmoduck" but is very chummy chummy with Fenton.
Darkwing Duck needs to be a series again and soon.

Otherwise, other than some nitpicks I thoroughly enjoyed the two parter.

I thought the villains would have stuck around.

Also, I thought for sure that SHUSH would be Darkwing's benefactor. Having it be Fenton is providing some amusing material, though.

Kind of weird that Darkwing was already relocated to St. Canard without any explanation.

I think the next time we see Bulba, he's going to look a bit different... and a lot more dangerous.

I like how they aren't going to push the "it's too dangerous" thing on Gosalyn this time. I was also thrown off by the crossbow, so didn't realize they were foreshadowing her costumed identity.

Think the arrows might be a reference to arrow gas from the NES game? Between that and deflecting attacks with his cape, I think it got a bit of love here.

Man, this version of Bushroot was creepy.

After seeing an embed for a video I avoided watching, I thought we were getting a Darkwing Duck theme remix for the intro -- didn't realize until now it was someone putting the old theme over the preview. I'm more than a little disappointed about that.

Overall, though? This was great. We need a spin-off already.

I’m still way back in the first season.

Ill say that Don Karnage is the first character redesign I didn’t like more than the original, but I’ll also admit that his original look wouldn’t have fit his character, which was much more enjoyable.

Also, while an excellent pun, the actor who plays Darkwing Duck is Jim Starling, and I’m not sure if that’s a Clumsy reference to Jim Cummings Or Jim Starlin (which fits better but he‘s not associated those kind of superhero stories).

Also, I’m so pleased that the triplets are discernable now. I even can identify them by name now!

Why are their heads so round?

Zef said:
Why are their heads so round?
Click to expand...

What does "Quackaroonie" even mean?

Disney put the whole Darkwing episode up on YouTube for anyone who hasn’t seen it yet.