Cotton Reboot! and the return of fantastic night dreams

This has been known about and anticipated for a while, but there was no thread for it on this reboot of Talking Time. We must rectify.


Cotton Reboot! revives a series that once stood tall as a codifying example of the cute 'em up shooter concept and aesthetic, for its better and less great aspects. For the better, the series's thematics have always been interwoven in an expression of the whimsically macabre and ghoulish; a true Halloween season or year-round spooktacular in the friendliest and most approachable way possible, reflecting in the impetuous eponymous witch's screen presence as well as in her friends, foes and world. For the worse, the series was also informed from the start by a sort of unfortunate tonal matching of parodic elements and cheeky sexualization that contemporaries like Parodius also fashioned themselves after, usually manifested through Cotton's constant fairy companion Silk, a pin-up figure clad in little more than a thong, and a fixture of the games' marketing and interstitial splash screens. It's comparatively tame, but persistent and surely emblematic of what later successors went on to do with their own takes on the elements in play, like Cave's Deathsmiles. Personally it's made it harder to commit to a series that otherwise has wonderful aesthetics and compelling-in-their-absurdity narrative premises, as Cotton is usually mostly concerned with securing her next fix of magical sweets and candy, and so she must fight on. The passing of years probably shift these perceptions some, if only through the added contrast of other, worse examples, and maybe the side-eyeings of old become the kitschy resignation or appreciation of today. To its credit, I don't think Cotton has ever attempted or suggested the sexualization of its young protagonist or her peers--only her mostly-nude familiar. I'll leave it to each individual to decide whether any of this has an effect on potential explorations of the series at large.

For Reboot! in particular, it remakes the inaugural game in the series, Fantastic Night Dreams, and specifically patterns itself after the 1993 Sharp X68000 home port, credited with being the most faithful of its time. Cotton showed up on quite a few systems in its day, so the chance to play a 16:9 aspect ratio, totally redrawn remake, alongside an accurate conversion of the most authentic home port unreleased outside of Japan until now is a big treat even if you happen to be familiar with the overall game. Slated for a February 25th 2021 Japanese release for Windows, PS4 and Switch (and a later Q1 release worldwide), Reboot! launches on the exact day as the just-revealed Ghosts 'n Goblins Resurrection, for what I presume is entirely coincidental but pleasingly apt synergy, as they represent the long-awaited returns of beloved stalwarts of their respective genres, and ensure February is in the running for the spookiest month of all.

Please use this thread for talking about anything Cotton if you'd like--it damn certain has earned it with remarkable entries like Panorama and 2/Boomerang.
Last edited: Dec 11, 2020

Staff member
Moderator
The X68000 conversion isn't just authentic to the arcade original but is considerably improved; increasing the resolution, redrawing many of the graphics, and adding fancy effects like semitransparency: 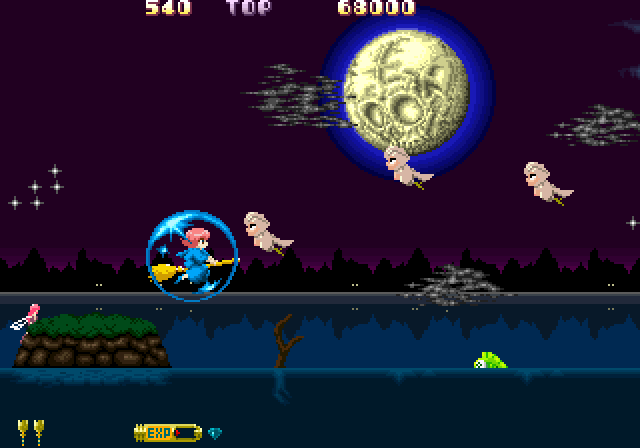 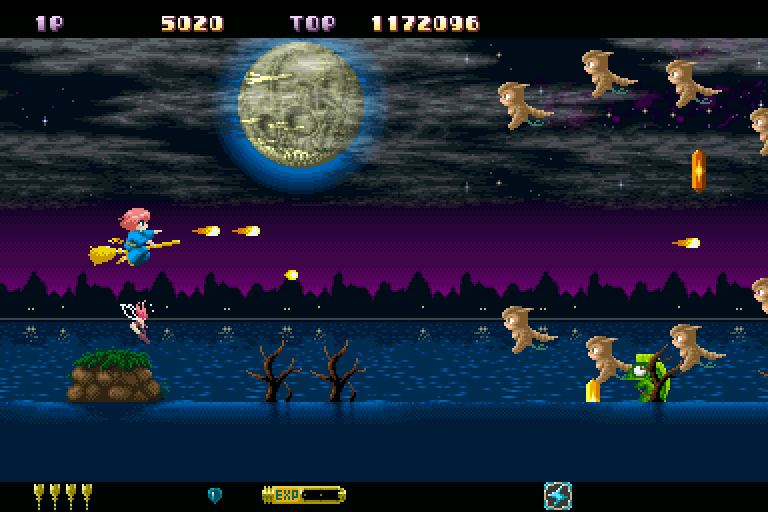 It was the mark of true fans to bundle this version with Reboot. Reboot, of course, redraws everything yet again, and also adds some modern scoring mechanics where you shoot jewels and fill the entire screen with giant point indicators like it's a Cave game or something. I also appreciate that the collector's edition includes a teacup, which was a Cotton series tradition years before "collector's editions" were even a thing as such: 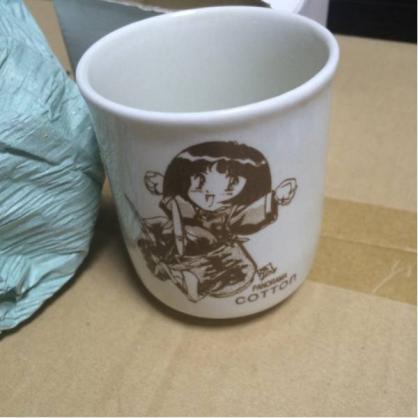 As for the series in general, Panorama Cotton is my favorite—just an incredibly vibrant, colorful game, and a towering technical achievement for the Mega Drive besides. I wonder if that one could ever get a remake that brings it up from its valiant 20 FPS...

That is cool as heck about the X68000 version; I'd been undersold its capability, apparently. Even more excited now!

Probably the most widely (these things are very relative) seen version of the first game is the PC Engine Super CD-ROM² version, which made its compromises in resolution and such but offered a very of-its-time Redbook audio treatment of the soundtrack and added voice acting to the story, and so remains relevant in that way. The only time the series was seen outside of Japan before now, for what I'm sure was a very limited release on the dwindling Turbo CD.

Kishi said:
As for the series in general, Panorama Cotton is my favorite—just an incredibly vibrant, colorful game, and a towering technical achievement for the Mega Drive besides. I wonder if that one could ever get a remake that brings it up from its valiant 20 FPS...

Those cinematics are incredible for the base Mega Drive, really cool stuff

Anyways I am down for more classic hori shmups

Peklo said:
The only time the series was seen outside of Japan before now
Click to expand... 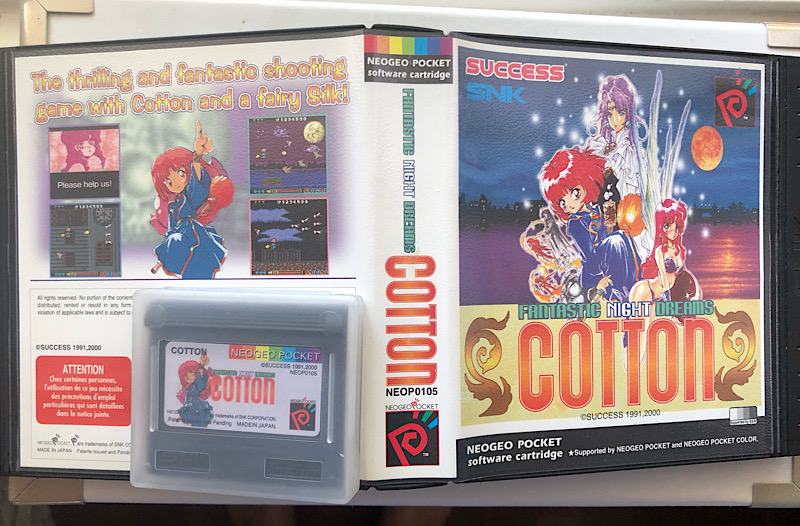 The NGPC port got an international release. I’ve helpfully covered the ELSPA logo with the cart there, but this came out in the UK at least. This is the only version I’ve played, so I can’t compare it to the others, but I found it to be quite playable and enjoyable, and from what I’ve seen of the original it looks pretty faithful. Including the cover shot of

Cotton the character also makes an appearance in Success’s Rondo of Swords for DS, where she’s a hidden playable character. It’s a while since I played it, but I think she was fairly overpowered and thus crucial to my efforts to finish that rather difficult game.

Like the North American Turbo CD release of the original, I barely believe this release is real either despite the irrefutable evidence presented (I also don't believe the Neo Geo Pocket itself was ever real). Cool though!

I think it’s pretty rare - I just had a look at what people are asking for it online and it’s a lot. Like, ten times what I got it for, which was a fair bit. Yowza.

NGPC games in general gave gotten terribly inflated. I remember within the decade you could still get blister packs of like 4 games for $20

Peklo said:
(I also don't believe the Neo Geo Pocket itself was ever real).
Click to expand...

It's not, but it is a wonderful delusion. I'm very much in for more Cotton. Also, @Kishi, is the X68k version the same as the PS1 version, like Castlevania Chronicles, or are they different?


muteKi said:
NGPC games in general gave gotten terribly inflated. I remember within the decade you could still get blister packs of like 4 games for $20
Click to expand...

I have a complete boxed copy of one of the rarest games I'm aware of, Big Bang Pro Wrestling, definitely the rarest game in my collection (but far from the most valuable), and I got it for about $70 eight or so years ago. (EDIT TO ADD: I checked on eBay for funsies and there's ONE copy of a cart-only and the seller is asking for $750!) I got one of said $20 blister packs with Last Blade: Beyond the Destiny in it (a US game that it was debated for some time if it did exist) around that same time. NGPC was, for years, my go-to when people asked about cool, cheap systems to collect for (PC Engine used to be there, too, bare HuCards used to be cheap as chips), but it looks like the retrogaming bubble economy comes for us all, eventually.

ShakeWell said:
Also, @Kishi, is the X68k version the same as the PS1 version, like Castlevania Chronicles, or are they different?
Click to expand...

The PS port is fundamentally the same as the arcade version. The main differences are that the music and sound effects are a little different (still synthy, but not as harsh as the original FM sound), and there's an options menu similar to the X68K version.

Satō Tetsurō, a composer with credits on Success games going back to 1999, has unearthed development material for a Cotton 3, dating it to 1998. (Cotton 2 was released in 1997.) They say it predates their joining the company and that there's no trace of such a project beyond what's here.

So not the same as Rainbow Cotton?

Must say I prefer the original graphics. Sad to say because I'm sure a lot of work went into it, but hand-drawn graphics in 2D games don't look as good as sprites, especially when they're animated with "paper doll" sliding and rotation.

Staff member
Moderator
I'm not sure what you're referring to, but if it's Cotton Reboot, the sprites are all still pixel art. 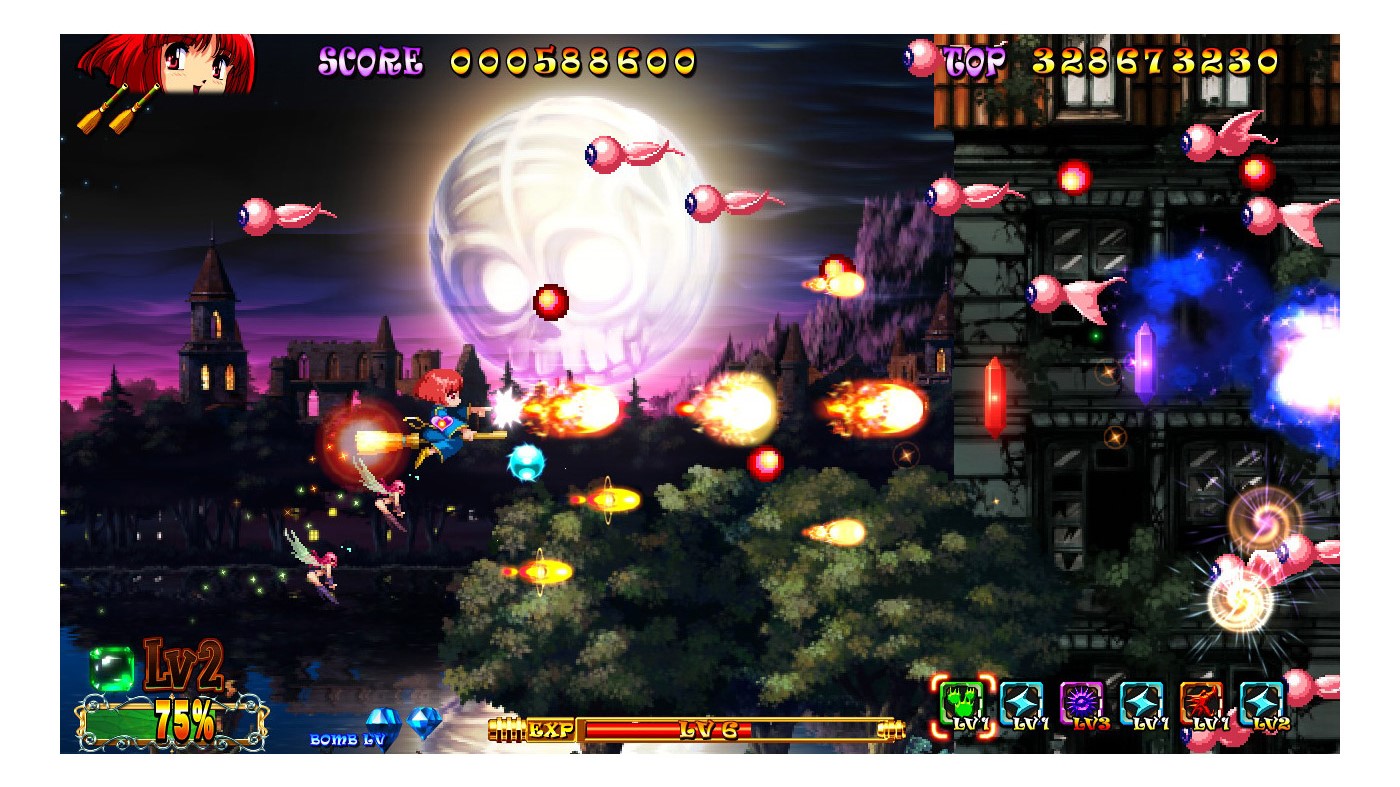