Neo Skimbleshanks said:
I know Teen Titans Go! has a mixed reputation, but I love it. The movie won me over bc the Teens were completely deranged murderers but the series has kept my attention bc its middle-age writers can't stop trying to give financial advice to children who will find it inscrutable.
Click to expand...

Given both the nature of the show, and the production of it, I have absolutely no idea if the fact that Iris has been barely seen nor heard of in several episodes despite several characters talking to her off camera is intentional or just the clumsiest possible way to write around the absense of one of the main actors.

Also, wasnt Nora erased from history all together? And… like… the entire thing with her last appearance was how she erased herself from history… and Barry and Iris were very sad because watching your future daughter obliterate herself from The time stream isn’t the kind of grief most counselors are able to deal with?

Also, literally no mention of the next big bad before this episode to my memory, even though I guess everyone already knows all about him?

The Flash is an intensely dumb show

At least we still have Legends where this week gave us:

WB announced it's casted its Barbara Gordon for the new HBO Max Batgirl movie. I thought this was a pretty good response to the announcement:

Meanwhile, this week The Flash has uh, definitely uh, jumped something.

WisteriaHysteria said:
Meanwhile, this week The Flash has uh, definitely uh, jumped something.
Click to expand...

Haven't watched Flash in several years, but I'm delighted by the early-to-mid-90s Power Rangers aesthetics on display, from the costumes to the sets to the lighting to the cinematogrpahy. White Ranger here has the best acting ever and I wish I could frame the silent reactions from the peanut gallery to the lightsaber duel.

Also I gotta say I really appreciate Thawne wearing an actual, cloth cowl, in an era where SFX rely way too much on insta-helmets and insta-masks.

The current Godspeed arc of Flash is substantially more fun than… like… anything in the last couple of seasons.

Mainly because Godspeed himself is bringing out the biggest performance ever in the show.

The giant CG Gorilla Man was a much more restrained actor

Titans continues to be an amazing and frustrating mix of genuinely very good and head scratchingly bad. The first few episodes of Season 3 spend their time trying to convince the viewer that Jason Todd is a threat to the whole team, while having spent all of last season establishing him as a dork ass loser.

Is it bad that I want Constantine and Mick to stay dead?

Supergirl returned last week for its final run of episodes.

It was really nice to have the gang back together after the mini-plot of Supergirl being stuck in the Phantom Zone, but it was still a bit awkward. With previews implying it would be mostly about her dad, as 'Uncle Archie' poorly adapting to his new powers and giving away that he's an alien, it was instead about Kara dealing with facing her trauma at the hands of the Phantoms (good) and her dad reliving Krypton's end through Earth's environmental crisis (meh?). Only the latter also spawned the monster of the week in a really wonky CGI battle. But honestly, I missed this kind of wonkiness.

The episode is strongest at the very end, after Space Dad zips back to Argo City (goodbye Zor'El, you sure contributed a lot) and Kara and Alex have the big sisterly moment that most of the audience has been waiting for since the end of the episode before the hiatus.

Oh and the very last stinger of the episode has Nia wake up in a fright after apparently having a dream about Nixly? Guess we'll see where that goes this week.

No sign of Lex, weirdly enough. I was expecting the show to at least give us a peek at his reaction to Supergirl's return, but I guess we have to wait for him to drop in at some point in the future to screw everything up.

Trailers for two new things:
WB is so trick or treat, it's wild.

Also a casting announcement for a third thing

This doesn't sound nearly as good as Badge Patrol. 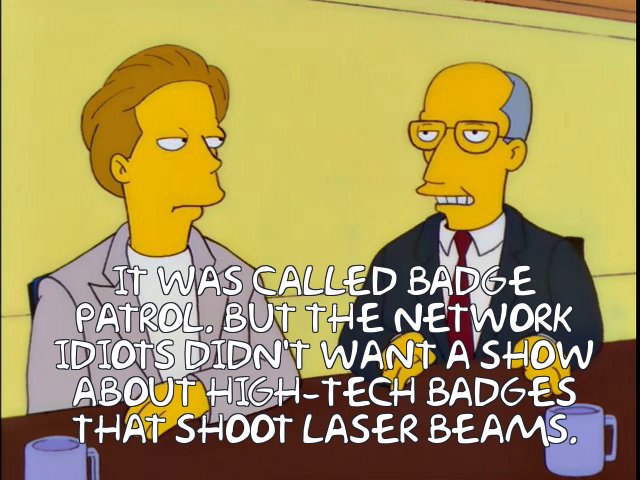 This definitely sounds like it's for the Paw Patrol viewers.

So this week on Supergirl Lena goes to Newfoundland, of all places, to track down her heritage (wasn't she Irish? Whatever), and I posted my thoughts over on AVClub on how the episode handled the setting:

Ok so wow, the Newfoundland stuff. On the one hand it’s not a super-retcon regarding Lena’s Irish heritage, Newfoundland has a lot of Irish decendents (hell there’s even a band with that exact name) but the framing definitely feels weird.

There’s no town called Fortune Bay, that I’m aware of, but there IS an actual bay with that name. Some of the panning shots were good and felt right for the province, but I the bar/restaurant setting felt wrong, no town with a population of around 800 is keeping up a business like that.

Also, witchcraft is not really a thing in our folklore, at least not of the Salem variety that the show seemed to be leaning into. If they had gone with something more like the Fae folk it may have felt a bit more authentic.

But the accents. My god. It’s true the province has a wide range of dialects but most of the people in this town didn’t even sound like they shared the same one. Really makes it feel like this was a last minute setting decision, even if that’s not actually the case.

And I think I pulled something cringing at Andrea when she said ‘Newfinlind’. That was old in the 90s, American media! How is that pronunciation still a thing?!
Click to expand...

WisteriaHysteria said:
Oof, like I said, trick or treat.


Gotta chase those sweet, sweet bucks from the Cars demographic.

WisteriaHysteria said:
Oof, like I said, trick or treat.

I totally buy that Monster Trucks are the "circus performers" of the vehicle universe. Physically, Nightwing is lithe and acrobatic, but psychologically, he is often showboating and easily would be the most-interesting-to-watch-in-action member of the Bat-family. People would pay money to see the Flying Graysons, and then stick around for Night-truckasaurus.

Wouldn't be my first choice, but I can see the justification.

SpoonyBard said:
And I think I pulled something cringing at Andrea when she said ‘Newfinlind’. That was old in the 90s, American media! How is that pronunciation still a thing?!
Click to expand...

Newfinland. Newfin' Land. Be sure and pronounce land as Land, not 'Lind'.

And its not New-Found-Land either. (Mercifully I've never heard anyone say New-Found-Lind, though that would be a new one.)

It might be nitpicky, but I've heard folks from the states (and even some Canadians) mispronounce this my whole life.

My father is from Newfoundland and never ceases to be outraged when someone pronounces it incorrectly.

So help me God, I can not tell the difference between the way he says it and the way he's complaining about

gogglebob said:
I totally buy that Monster Trucks are the "circus performers" of the vehicle universe. Physically, Nightwing is lithe and acrobatic, but psychologically, he is often showboating and easily would be the most-interesting-to-watch-in-action member of the Bat-family. People would pay money to see the Flying Graysons, and then stick around for Night-truckasaurus.

Wouldn't be my first choice, but I can see the justification.
Click to expand...

See, I thought about this angle, and it still didn't really work either. Yes, monster trucks are a type of performance art. But high wire circus acts are all about grace and elegance high skill body manipulation. And at their core, monster trucks are about big dumb unwieldly things smashing into stuff. It would be a better fit for Red Hood than anyone else. And if you're having a hard time figuring out how to match Dick with a vehicle, there's still lots of options that would be better fits. Hot rods, rally sport cars, I even count dirt bikes as a way better option. Dirt bikes races done for audiences are way closer to displays of grace and skill and body control, especially when you've got someone doing stunts on top of the jumps.
You must log in or register to reply here.
Share:
Facebook Twitter Reddit Pinterest Tumblr WhatsApp Email Share Link
Top