So, about a week ago, Rebel Galaxy Outlaw got ported to consoles (it'd been on PC for a while) and I took one look at the trailer and said "Well heck, I gotta get me that!"

And then I said "Well HECK, this is great!" And then I decided to make a thread about it.

And then you started reading it!

Rebel Galaxy Outlaw is a sequel, or possibly spinoff, of the original Rebel Galaxy, which I didn't know existed until I started talking about how good this game is, so I can't really comment on how it differs, it's a trading-heavy space-ship sim, not completely dissimilar to the likes of Elite or Privateer or the like, and the trailer doesn't really do a lot to sell that as the main thrust of the gameplay, and it's probably for the best that it doesn't since, for one thing, if I knew that I wouldn't have bought it (not my cup of tea), and for another, it's all so streamlined as to make it a selling point would just be misleading; there is FAR more of a focus on hunting down and blasting apart space pirates and crooked corporations than on finding the best port to offload astro-whisky.

Game follows Juno, a retired outlaw and bounty-hunter who is forced back into the life when she feels obligated to avenge the murder of her husband (a task that comes across more like a tedious chore than a personal tragedy she's trying to overcome), and her efforts to overcome the biggest obstacle she has to that end; the only ship she can get her hands on to enact her vengeance with is little more than a long-haul garbage truck. So you earn money by taking on dangerous hauling/hunting missions and use that money to slowly upgrade your ship into something that can track down and retaliate against the criminals who made you a widow. It feels a lot like a Burt Reynolds movie, just with way more lasers and less racism.

I'm still pretty early in the game; just scrounged up enough cash to afford the means to travel to other star systems after wrapping up the tutorial missions, but I've loved every inch of the game so far; combat is fun and zippy, with the usual problem in games like this of making it a drawn out affair taking place at extremely long distances resolved by making it a series of rapid fire dogfights, more like something from Ace Combat (with lots of ways to get a full handle on the battlefield), upgrades are plentiful and easy to parse, and you can easily get a handle on ideal trading partners since the game tells you which ports are buying and selling what resources at what prices (or, again, forgo trading all together as blasting pirates is just as viable a payday). Also, the soundtrack is exceptional.

Staff member
Moderator
Agreed with Octo on all points above. I've been having a blast with the game myself. It does a lot of work to take the complexities of the genre and streamlines them without simplifying them, and it oozes style from every space-pore, all which gives it a great just-one-more-bite feeling.

It's a game for everyone who wanted an adaptation of Cowboy Bebop Episode 7: Heavy Metal Queen specifically.
Last edited: Sep 28, 2020

But I suppose it’s a buyers market for Contraband goods at a place like that.

Did anyone try the Switch version?

That’s what I’m playing. Looks and plays great docked, but in handheld mode the text gets blurry.

(I'm playing on Switch as well, it seems to play just fine but I'm not a tech head. I wouldn't know a dropped frame from a dropped ham sandwich)

I found a way to sell Contraband goods!
You need to find a station that has a Blackmarket Dealer, the one closest to the start of the game is in the Juarez System, which you can reach quickly from a Colarado jumpgate, but it's a High Risk jump, so you have a chance of taking catastrophic damage as soon as you try so... save before hand.

I'd say it was worth the trip for the sights alone. 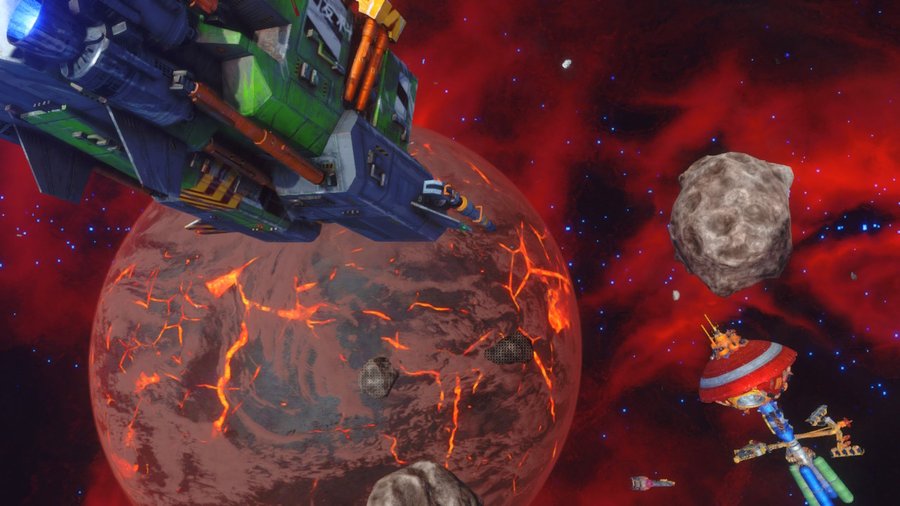 Octopus Prime said:
That’s what I’m playing. Looks and plays great docked, but in handheld mode the text gets blurry.
Click to expand...

I might think about getting it, but is it exclusively digital only so far?

Scrounged up enough cash to upgrade my ship from Garbage Truck to Discount Vic Viper; Happy to learn that all the upgrades I bought for the Platypus transfer over to the Sonora in addition to its higher base stats.

Now I can actually hunt down some space-scallywags in earnest!

Staff member
Moderator
I've had a busy few weeks but returned to outer space and upgraded to a new, sleek, and very purple-hued HUDed ship.

Hey! I bought that thing weeks ago!

Staff member
Moderator
Go back to a safer system. The only thing stopping you is your hubris.