Playdate Has Me Feeling Cranky 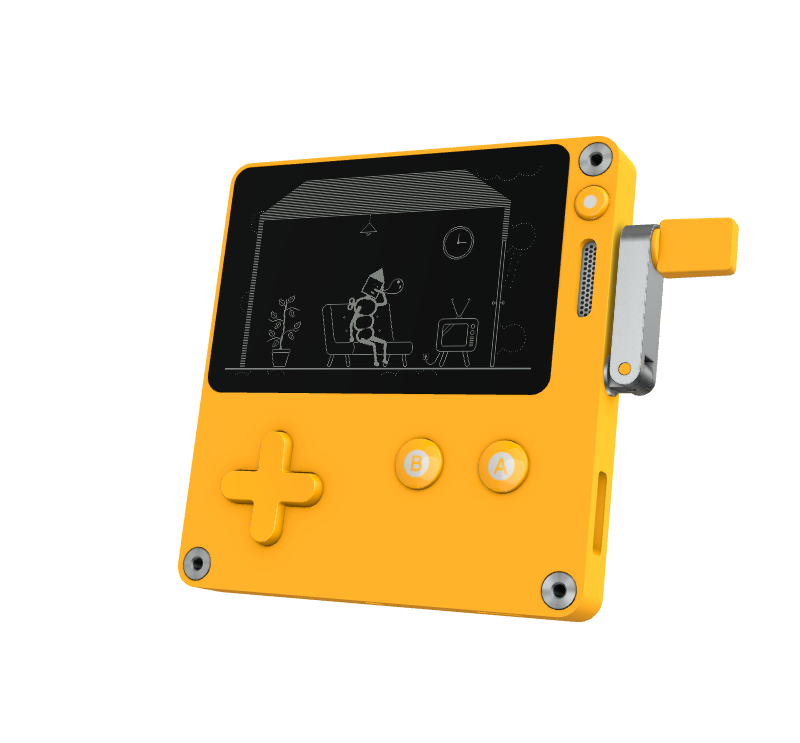 So this beautiful boy has been in development for quite a while, and it sounds like they're making some major announcements this Tuesday, June 8th, at 9:00 PDT. The info they have given so far is that the system - along with the first season of 24 games - will cost $179, and the onboard storage is 4 GB.

For those who don't know, Playdate is basically the Portland hipster of dedicated handhelds. It's a quirky black and white system that's not meant to compete with the big boys and it will have a small, curated library. It's being made by Panic, the publisher of Firewatch and Untitled Goose Game. The idea behind it is that once a week you get a game as a surprise, with the intention being that you don't know what the games are until you get them. Their messaging is a little muddled on that front (they've shown bits of a few games now), but regardless, the whole thing seems right up the alley of the folks here obsessed with dedicated handhelds. The 24 games are from a variety of legitimate developers, and will run the gamut from short to long, experimental to traditional.

"Looks great," you may say, "but I'm sure scalpers will just scoop them all up and jack up the price." Well, good news!

They've switched from having limited stock to doing open pre-orders, which means as long as you order it during the pre-order period, you're guaranteed to get one. I am so, so, so relieved. The downside to this model is that it takes a lot longer to ship everything out, since they won't know what the total stock is until after the pre-order, but I am totally cool with waiting ages to get this thing just as long as I know I'm getting it.

$179 is... spicy, though not absurdly so, imo. They wanted to make it cheaper but COVID doubled the prices of their most critical components. Hopefully folks here who want it can afford it and will have enough time to save up for it. I'm just excited because it's a weird and obscure handheld which is designed to be weird and obscure, and that getting all the games for it will actually be possible.


EDIT: Be mindful that games in Season One are meant to be a secret, so discussion of them is spoiler territory. I think anything not part of Season One is fair game, though. Yes, this is weird.

Oh right, and there's a crank.

Anyway, thanks for this post - I'd lost track of the thing, and didn't know they were taking unlimited pre-orders, meaning I won't have to compete with scalpers. Nice! Depending on the timing of the pre-order period, I'll probably get one.

This thing looks cool and I'd like one, but at what will probably end up being $250 CAD, it's too expensive for me, unless I hear people say that it's really knocking their socks off when it comes out.

I love this dumb thing. Not sure if I’ll order one yet, but I’m happy it exists. Keita Takahashi’s game where you can control time with the crank is tempting.

Staff member
Moderator
Why is the crank only on the right? Ughhhvvvvvfhsbbddhfb

This thing looks cool and I'd like one, but at what will probably end up being $250 CAD, it's too expensive for me, unless I hear people say that it's really knocking their socks off when it comes out.
Click to expand...

I've heard about this here and there, but this is the first time I think I understood the appeal. It sort of reminds me of playing obscure freeware games on classic mac because every game would be completely different and usually have some kind of sense of humor to it.

I'd only seen renders before, the real thing is smaller than I expected! I think it's because it has such a "kid's toy" design sensibility to it, I figured it'd be a little chunkier.
The Takahashi game looks delightful, if a bit repetitive.

karzac said:
This thing looks cool and I'd like one, but at what will probably end up being $250 CAD, it's too expensive for me, unless I hear people say that it's really knocking their socks off when it comes out.
Click to expand...

Yeah, this is where I'm at. I really love the idea of this little thing (and a new Keita Takahashi game is certainly a draw), but the price is giving me pause. ~$180 CAD was already a bit on the pricey side but I could just about justify it to myself, but this price bump puts it at least ~$220 CAD, and that's a lot harder for me to swallow. I'm a little bummed out, honestly.

Gaer said:
Why is the crank only on the right? Ughhhvvvvvfhsbbddhfb
Click to expand...

https://twitter.com/i/web/status/1401931807625416705
I was hoping for a more substantive answer than pointing at other consoles. Other consoles are also bad at this! Other consoles don’t have cranks!

Sprite said:
https://twitter.com/i/web/status/1401931807625416705
I was hoping for a more substantive answer than pointing at other consoles. Other consoles are also bad at this! Other consoles don’t have cranks!
Click to expand...

Spoken like someone who has never had to rip off some zip ties to be able to pull a “public access” computer mouse to the left side.

I think you answered the question in the OP. Someone making something this pretentious at that price point is also going to be privileged enough to give zero fucks about accessibility.

Staff member
Moderator
It is a bigger, industry wide issue than simple pretentiousness.

You’d think I’d stop getting angry every time by now.

Sorry. Bad look on my part.

That price point is what stops me. I can buy one of those retro handhelds and install Pico-8 on it for less than that and have a similar hipster handheld experience, just minus the crank.

As a leftie, I don't mind a crank on the right. I've been dealing with a backwards world all my life. I think my bigger challenge would be having enough time to regularly play a game a week until I felt like I got my money's worth out of the product! It looks like a fun idea, but I'm probably too busy.

Same for me. Accessibility is obviously a massive problem in the games industry, but I don't consider being left-handed to be a disability, just an occasional mild inconvenience. My right hand can turn a crank.

Though yeah, I agree that it sucks that they aren't making a left-handed version of this for those for whom it is a strong preference, though I understand that the economics of production/manufacturing make that less viable (read: profitable).

Note, I’m not saying hipster derisively (hell, I describe myself that way in my handle), but I mean it’s a relatively expensive niche handheld made by indie devs that has a crank input. It doesn’t make it bad, but it is what it is.

The website updated, has a list of games and some info about a dock (!). I think it's all still $179 (EDIT: it is, no announced price for the dock yet)? I haven't watched the update video, but preorders start in July.

I'm glad the pre-orders are still weeks away, so I have the time to hem and haw over whether I'm willing to spend that much money. I'm still undecided…

That dock is really, really nice looking, though…

Regarding handedness (again), I just realized that if there were a system-level way to use the system upside-down that might (possibly, maybe, idk) be a cheap, workable accomodation.

I'm definitely getting one, and at least the neat little cover they have for it, so I'm in for over $200 lol ugh

Dracula said:
Same for me. Accessibility is obviously a massive problem in the games industry, but I don't consider being left-handed to be a disability, just an occasional mild inconvenience. My right hand can turn a crank.
Click to expand...

I was not saying that being left handed is a disability, just that no one considers left hand dominant people similarly to that of disabled people: ie completely invisible.

The game on the video looks cool, and I’ll shut up about the crank. I think it’s a cool idea but I absolutely had a tiny fit of pique at Stupid o’Clock when I watched the video the first time.