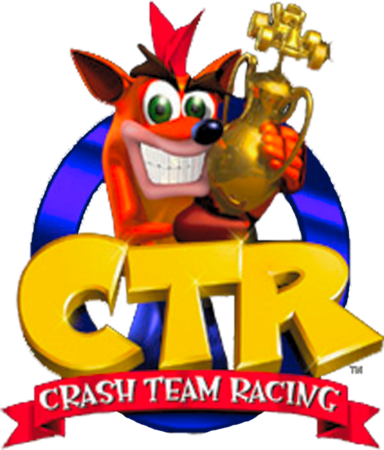 In the 16-bit era, there was a major rivalry. Nintendo and Sega... Mario and Sonic. Sure, these two alone didn't define the era, but they were the big name mascots and they were prime examples of what their systems could bring.

In the following era of gaming, the Sony PlayStation was a surprising powerhouse, competing against the Nintendo 64 and Sega Saturn. And while Sony didn't have an official mascot, they did have one that was an unofficial one... Crash Bandicoot.

Naughty Dog released a platforming trio staring the ditzy bandicoot, and then as their swan song with Crash, they made a kart racer, one that was competing with the likes of Mario Kart 64 and Diddy Kong Racing. Mario invented the kart racer, but could someone else improve upon it? It's subjective, of course, but I will say that I enjoyed CTR more than Mario Kart 64 (though I still greatly enjoyed that game). You see, in those days, a young Red really, really, REALLY wanted a Nintendo 64, and one fateful Christmas... received a PlayStation. It was some time before I got an N64 of my own, instead getting in bits and pieces of time with the included game Crash Bandicoot 2.

While I never played the original Crash Bandicoot game, the other three games were some of my favorite games of the time. But after Naughty Dog was no longer involved in the series, things got a bit more awkward. The quality of the games dropped quite a bit and while there are some hidden gems here and there, the brand was not the powerhouse it was.

Fast forward to this gaming generation, and Crash came back with a vengeance. The original trilogy remade with modern flair to great fanfare... and then CTR was remade as well. But they didn't just remake the game, they added on to it. They added all the tracks from the PS2 sequel, Crash Nitro Kart. They added more characters. And they added new tracks. The Grand Prix system gradually added more and more and more content. At the time of this posting, the game has just started its final Grand Prix.

In honor of this, I decided to play through the original version for the PlayStation. 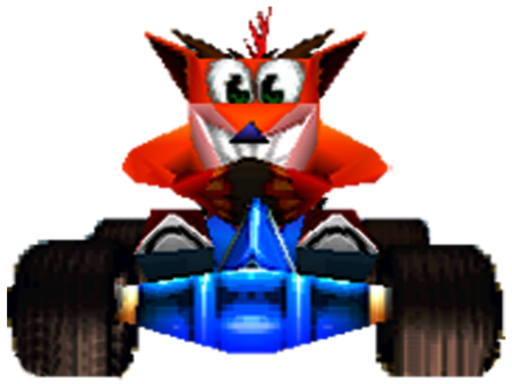 So to start things off... CTR has an Adventure mode, and that's what we'll be focusing on. So to start things off, there's an intro video which introduces us to the alien Nitros Oxide, and sets the scene. Oxide wants to race the faster racer on Earth for the fate of the planet, so everyone is going to race to gather trophies to prove they are the best, leading up to the confrontation with Oxide.

So, we need to decide who I'll be playing as! There are 'good' and 'evil' characters, but that only determines what invincibility mask we have access to, otherwise, our ability is based on the stats of the characters.

Here we have both a good guy and a bad guy! Both Coco Bandicoot and Dr. N Gin starred in Crash Bandicoot 2, and both returned in Warped, with Coco becoming playable.

The heads of good and evil here! Crash Bandicoot here for the forces of good and Dr. Neo Cortex for the bad guys. This was the class I played the most back in the day.

So that's eight characters... but who is going to try to face off with Oxide? That's up to you!

Coco debuted in Crash Bandicoot 2: Cortex Strikes Back, where her sending Crash on an errand to find her a replacement laptop battery led to the events of Crash being teleported to Cortex's warp room. She played a supportive role in that game, but went on to be playable in the sequel, Crash Bandicoot Warped, where she starred in several of the stages that didn't involve standard platforming.

The first area of the game to race through is N. Sanity Beach, named for the first level of Crash Bandicoot. Each area is laid out with 4 Racetracks, a Purple Crystal Challenge, and a Boss Race.

#1: Combing the Beach
Wherein Red doesn't know if you should jump on turtles, gets lectured about saving, and just barely makes it in time.

The second hub is the Lost Ruins, home to Papu Papu (leader of the local indigenous tribes and a boss from the original Crash Bandicoot).

They start making the CTR challenges a bit harder at this point as well, requiring you pull off shortcuts and make precise jumps!

#2: Pyramid Scheme
Wherein Red talks about Pizza Hut, shows a fat man why you should eat a big breakfast, and goes crazy aiming for that darn C.

The game starts throwing harder tracks at us when we head into the third hub: Glacier Park! When the tracks are hard enough just to win, how difficult are CTR tokens going to get?

Wherein Red has mixed feelings about ice shortcuts, had to throw out a 10 hour video, and goes circling for purple gems.

So here we have it, my first NEW Let's Play post on this new shiny forum. (It'll also go up on the old one, since this isn't fully open yet.)

Today we change gears a bit, instead of focusing on getting Trophys and CTR tokens, we're gonna look at some other collectibles... Gems and Relics!

Gems have been a mainstay in the Crash Bandicoot series since the first game. In the platformers you collect white gems in stages by collecting boxes, while the colored gems are usually something special, and unlock certain stuff. In Crash Team Racing, there are no white gems, but the colored ones are linked to races you unlock via your CTR tokens! (They don't award anything in Adventure mode, but they do unlock special characters for Arcade and Multiplayer!)

Relics debuted in Crash Bandicoot: Warped, linked to the Time Trail mode where you race through the stages as fast as possible to get them. It's a real simple concept, but it translates well to a racing game, so Relics are here as well! Some relics are needed to unlock a bonus track (which, paradoxically, is only used to earn another Relic in) and Relics are also linked to the true ending of the game.

Anyway, I've been dreading earning Relics since I started this Let's Play (My nephew, who gets shoutouts a bit in my later videos, has already offered to 'do it for me', but we're not doing those shenanigans. So, how will our first attempts at farming them go?

#4: Going for the Gold
Wherein Red decides not to try for style points, spots a secret character, and gives the full puzzling experience.

Time for my first Let's Play post that's unique to 3.0! Crash Team Racing is back and we've still got four more trophies before we can race for the right to call ourselves the fastest racer of Earth... with that dreaded race for the planet looming over our heads, let's head into bad guy central: Citadel City, the final area, and home to stages representing quite a few baddies (and one race so impressive that the PlayStation 1 couldn't handle it in multiplayer!)

After this video, the format might be a bit loose and fast, as there's a bunch of scattered things to do.

#5: High in the Sky
Wherein Red doesn't like the barrel, takes the scenic route, and pours one out for Talking Time 2.0
Last edited: Sep 3, 2020

So at this point, the 'knock out a whole area' format won't quite be working. We've got one boss fight (that we'll have to repeat) and a handful of gems, relics, and a couple CTR tokens left to go for. So how are we going to proceed?

Basically, follow the mood! So today we head to Gem Stone Valley to work on some unfinished business, before going after a few more relics.

We're getting closer to the final push now. Two CTR Tokens, two Gems, and a bunch of Relics remain.

You've seen how the normal colored tokens from the normal races work, but... what's up with those Purple ones? And will I ever get good at Hot Air Skyway?

#7: Gems are Truly Outrageous
Wherein Red doesn't try to drive cautiously, goes for a jump in the park, and is having issues with Hot Air Skyway.

As we clear out more and more of the easy Relics, that just means that what's left behind are some of the harder ones! Going into this playthough there were three stages that I was really worried about: Sewer Speedway, Dragon Mines, and Blizzard Bluff. Sewer Speedway we already fiddled around with but haven't gotten a gold, and moving into this batch of Relics we have two more of those stages. How bad will Dragon Mines turn out to be? And just what's so terrible about Blizzard Bluff?

#8: Melancholy Mine-carts
Wherein Red is worried about boxes in the sky, starts a race going backwards, and has issues with ice.

We've done a lot in the main game, and won all the main races, but the big surprise is that Gem Stone Valley has two tracks that aren't part of the main game: Slide Coliseum and Turbo Track! These 'bonus' tracks are unlocked by collecting all of the gems and a good chunk of the relics. So let's start things off by checking out these new tracks.

Then, with most of the first three areas all mastered, that leaves the last four tracks in Citadel City... but how hard are these relics going to be?
#9: Slidin' into Home
Wherein Red sciences things out, gets surprised by the first try, and finds exactly what he doesn't need in this level.

With the final stretch of the game ahead of us, there's just a handful of Relics left, and then a final rematch against Oxide. But, perhaps this time, a surprise is in store?

#10: Thanksgiving Finale
Wherein Red doesn't remember the races, has a special guest, and enjoys a scrapbook.