May you ever walk in the Light of the Crystal! Let's Play Final Fantasy XIV: A Realm Reborn 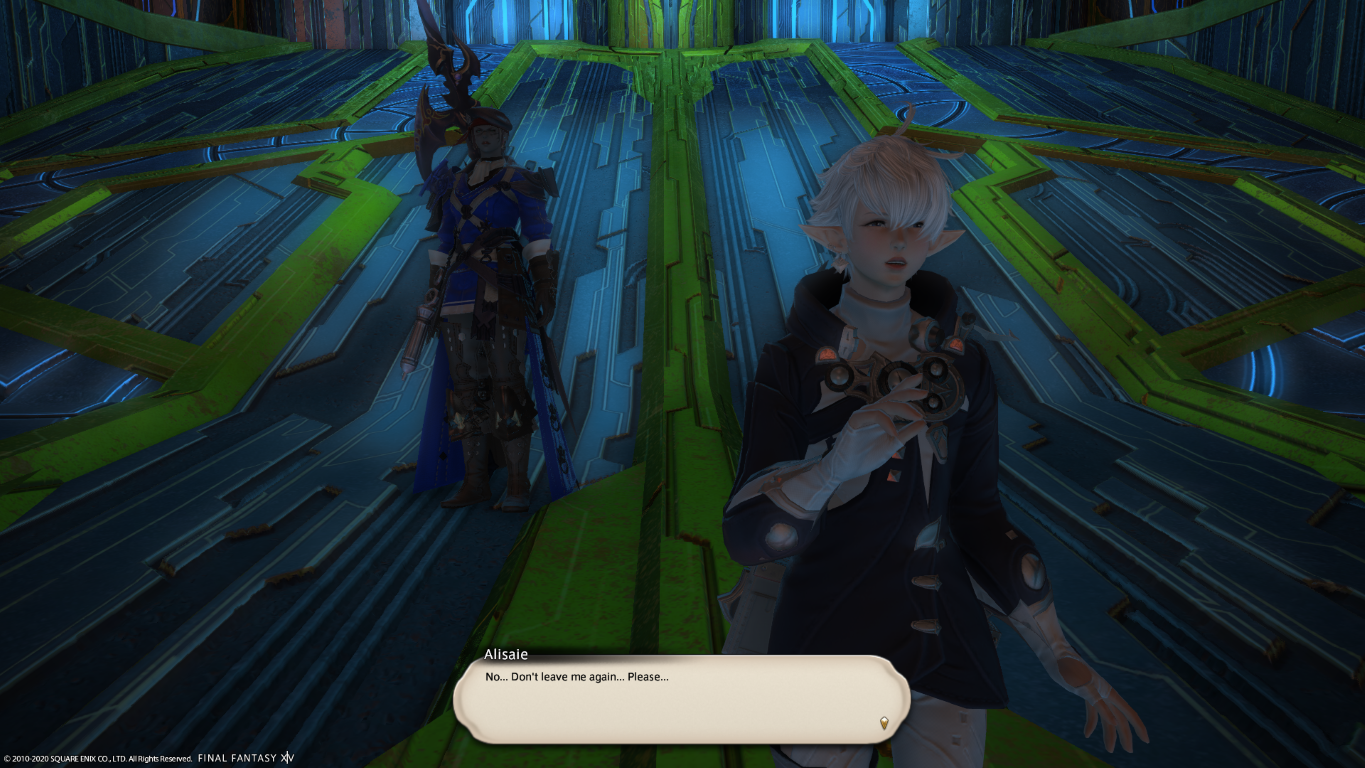 She calls out for him, but gets no response. Reluctantly, she leaves with Satznswys. 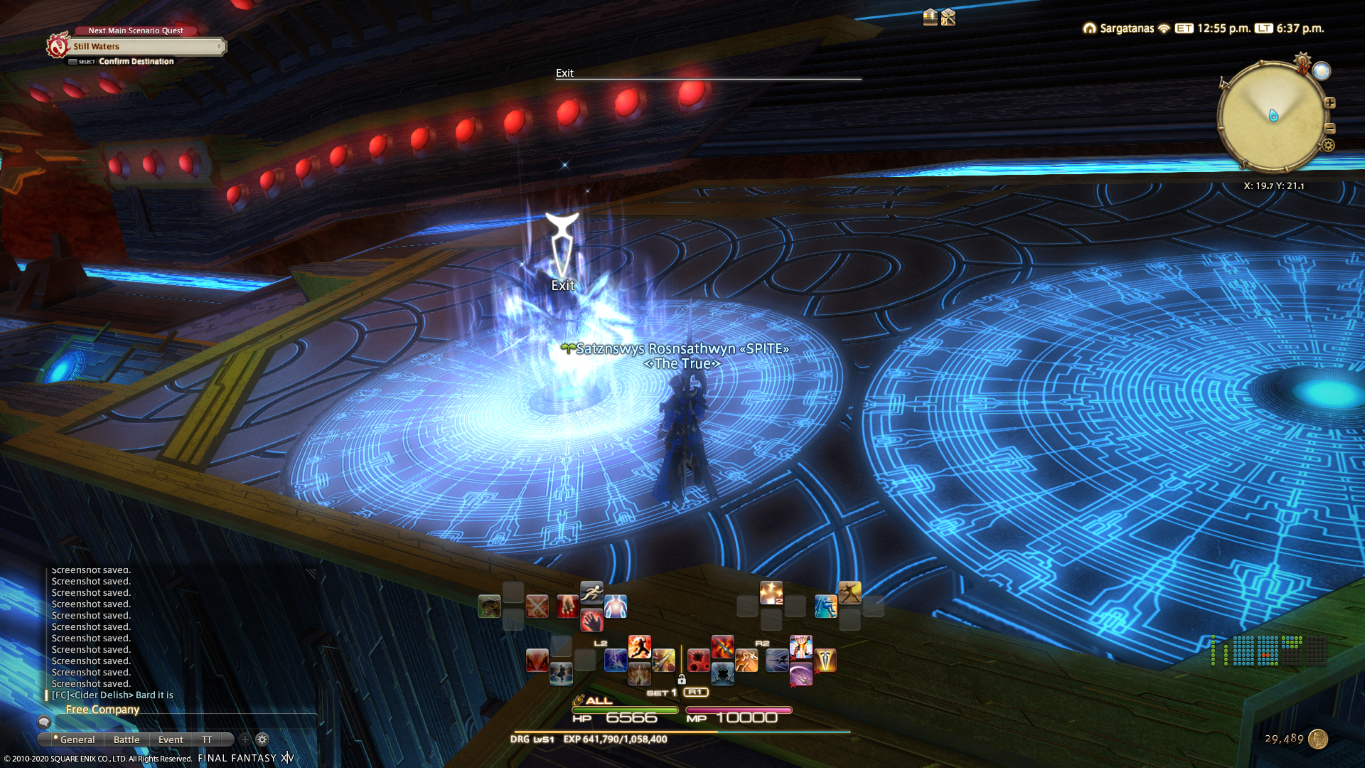 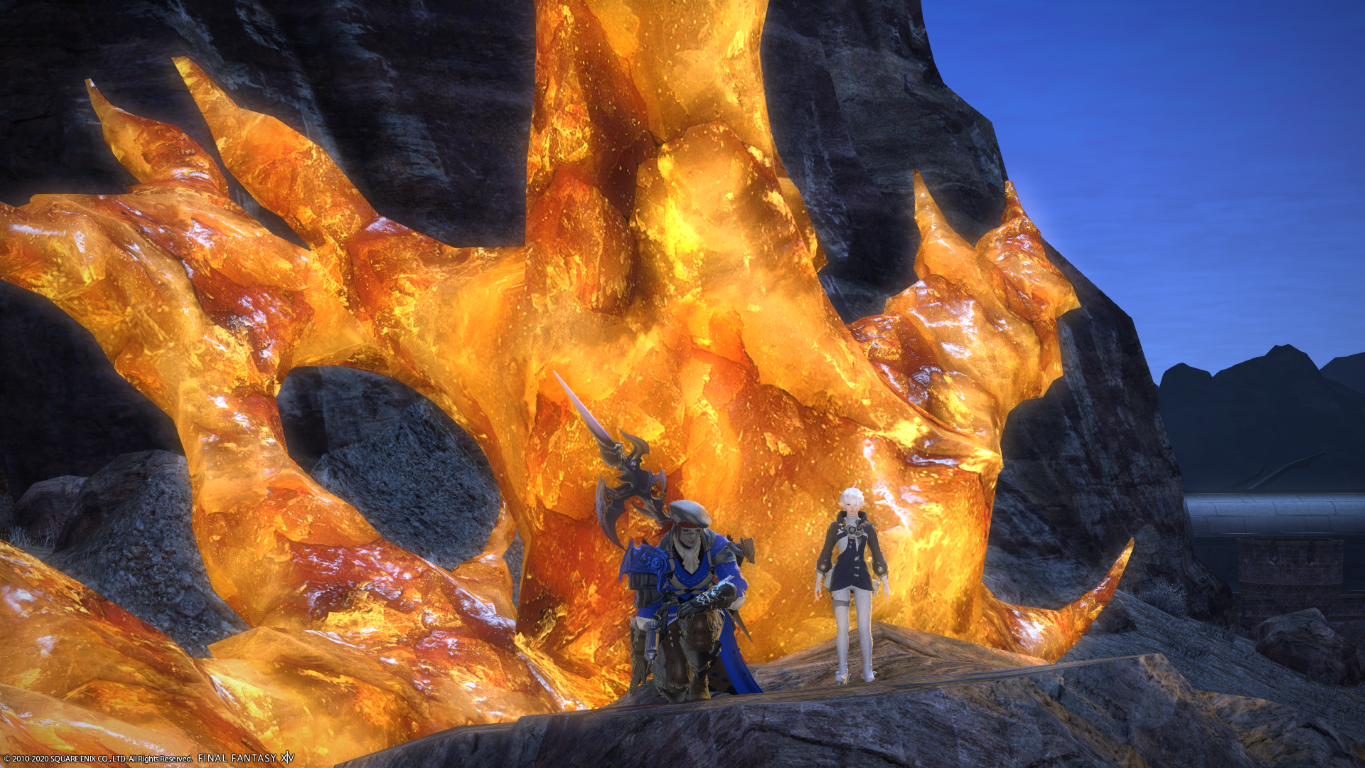 Utilizing the transport device they found, they appear on the surface, way from beneath the island of Vylbrand, all the way near to Castrum Meridianum. 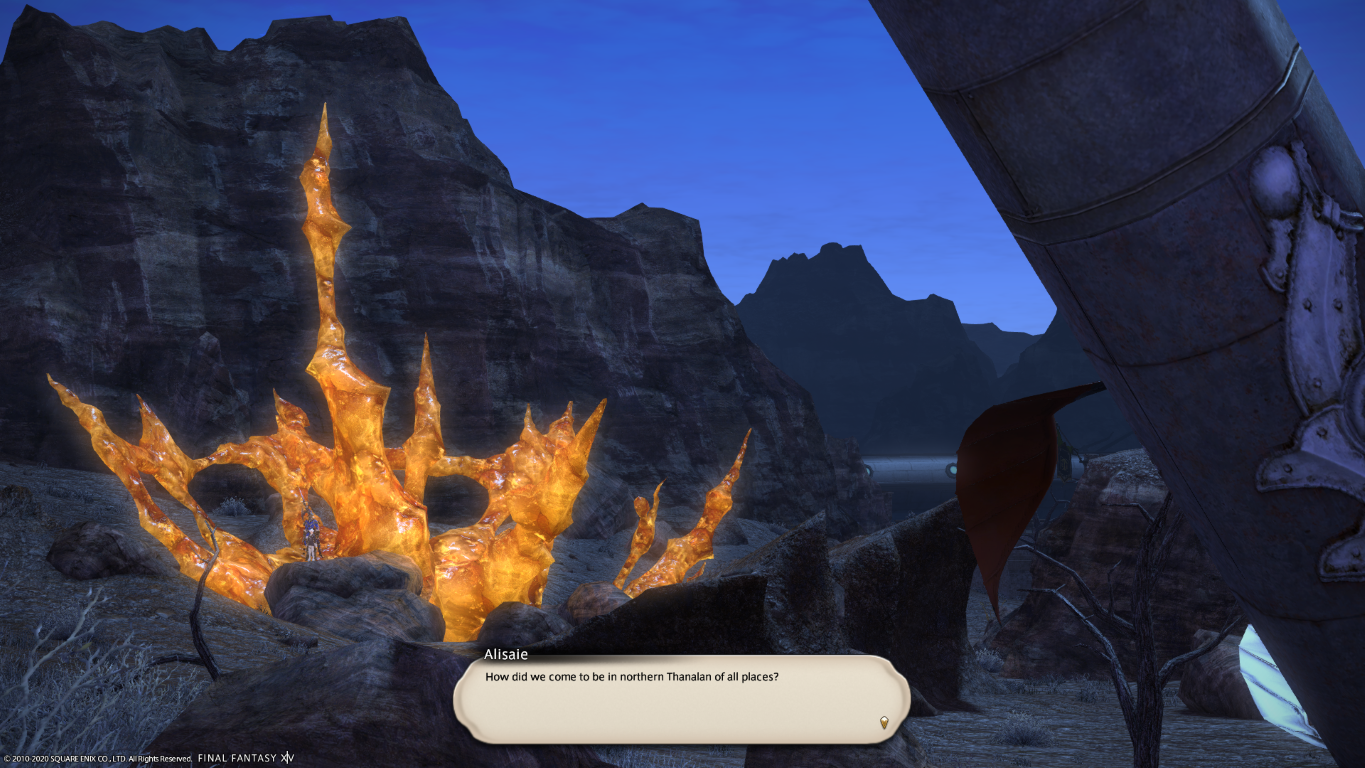 She brushes the apparent incongruity off. More present in her mind is that Louisoix is alive! And yet, he didn't seem to respond to her calling to him. 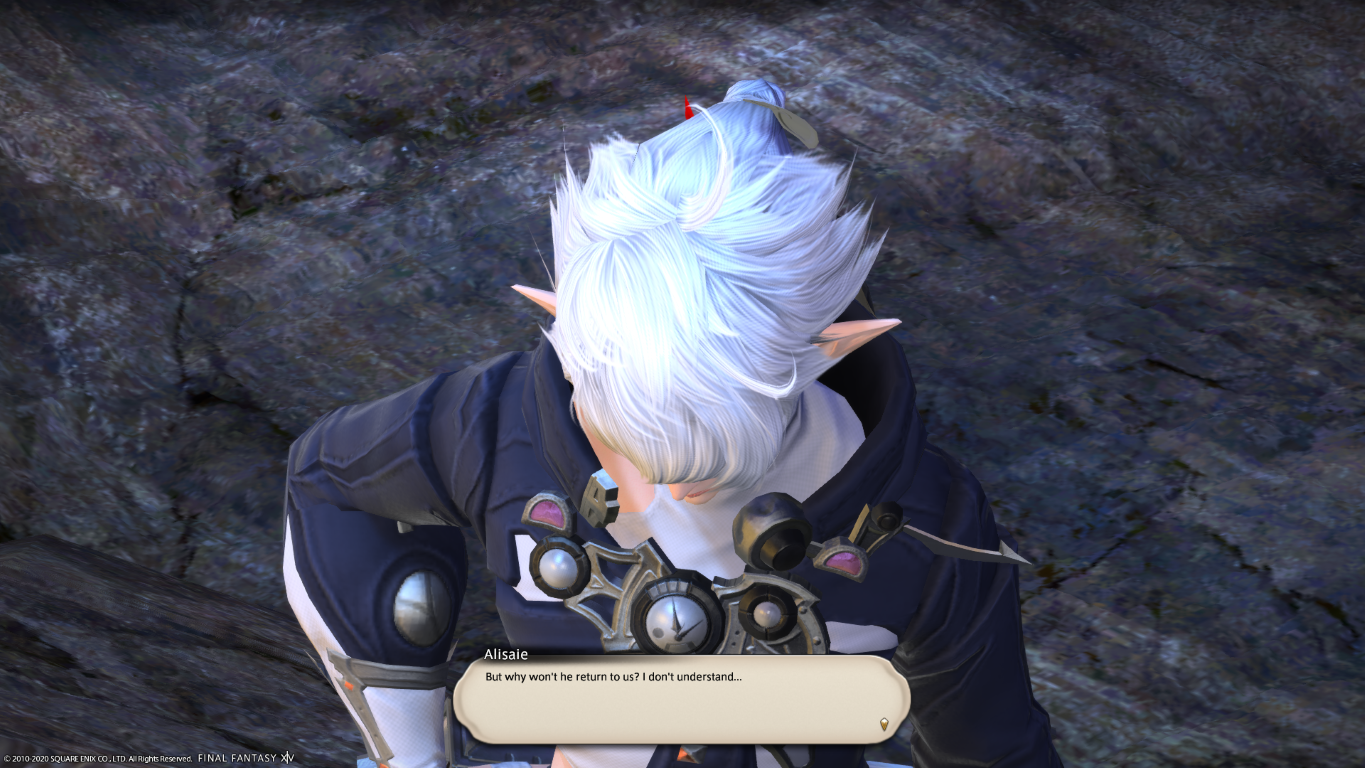 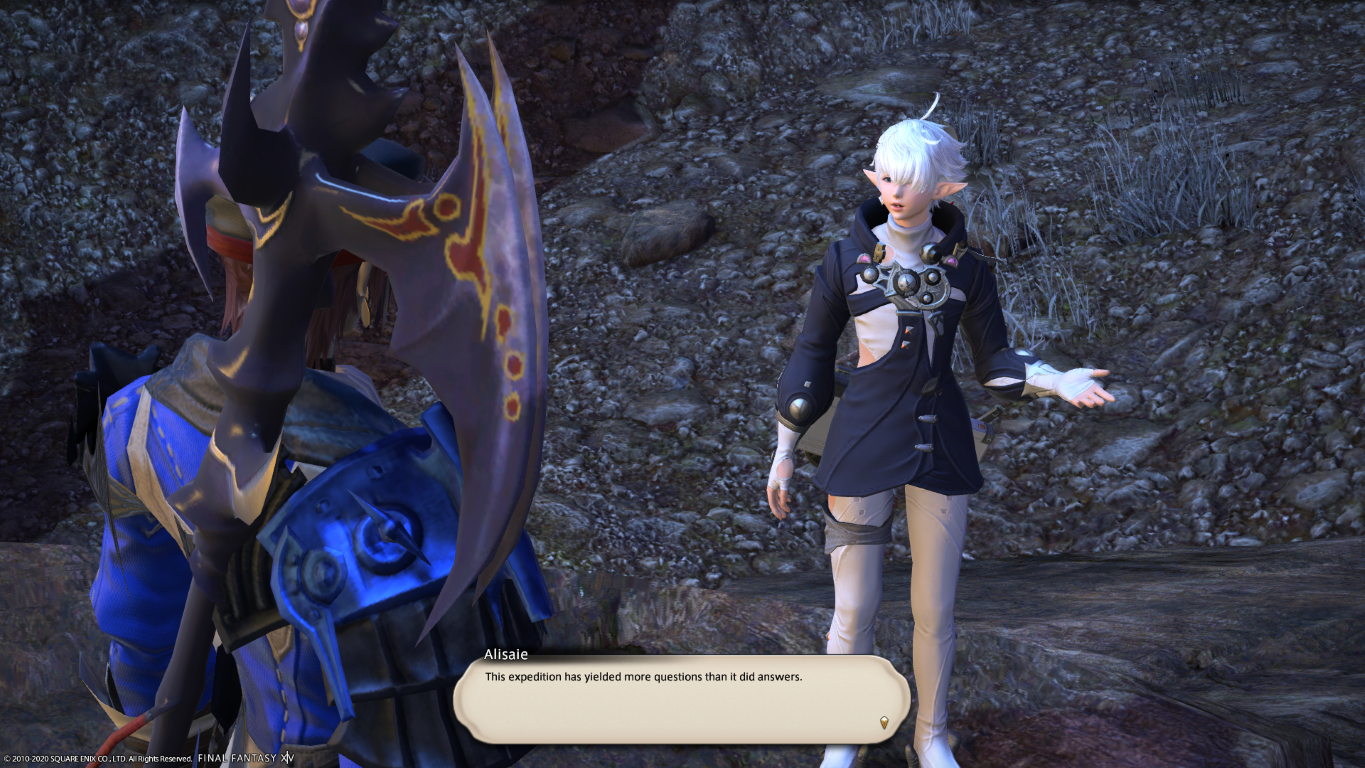 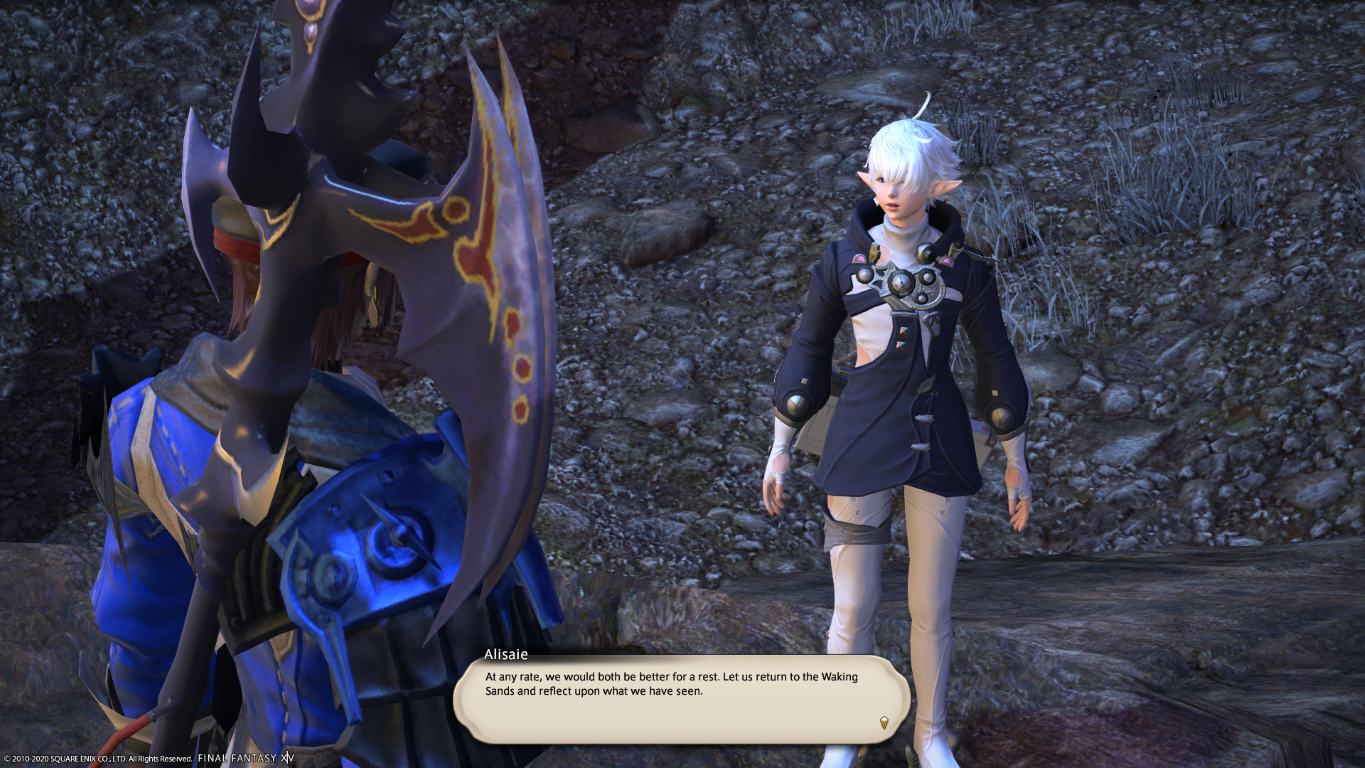 ...One thing you'll get to know about Alisaie is that she often gives voice to the player's thoughts. She's very canny. 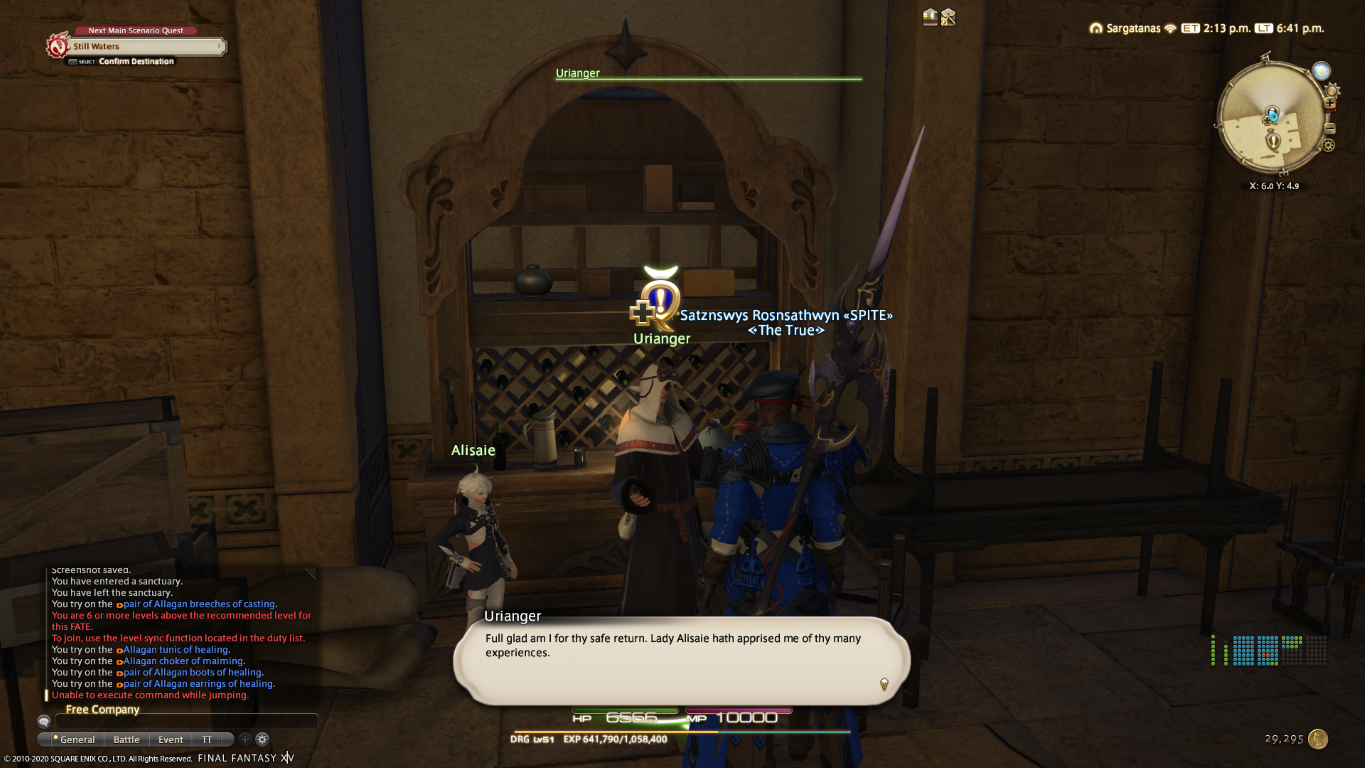 Urianger finds this all hard to swallow, but trusts both Alisaie and Satznswys's account. 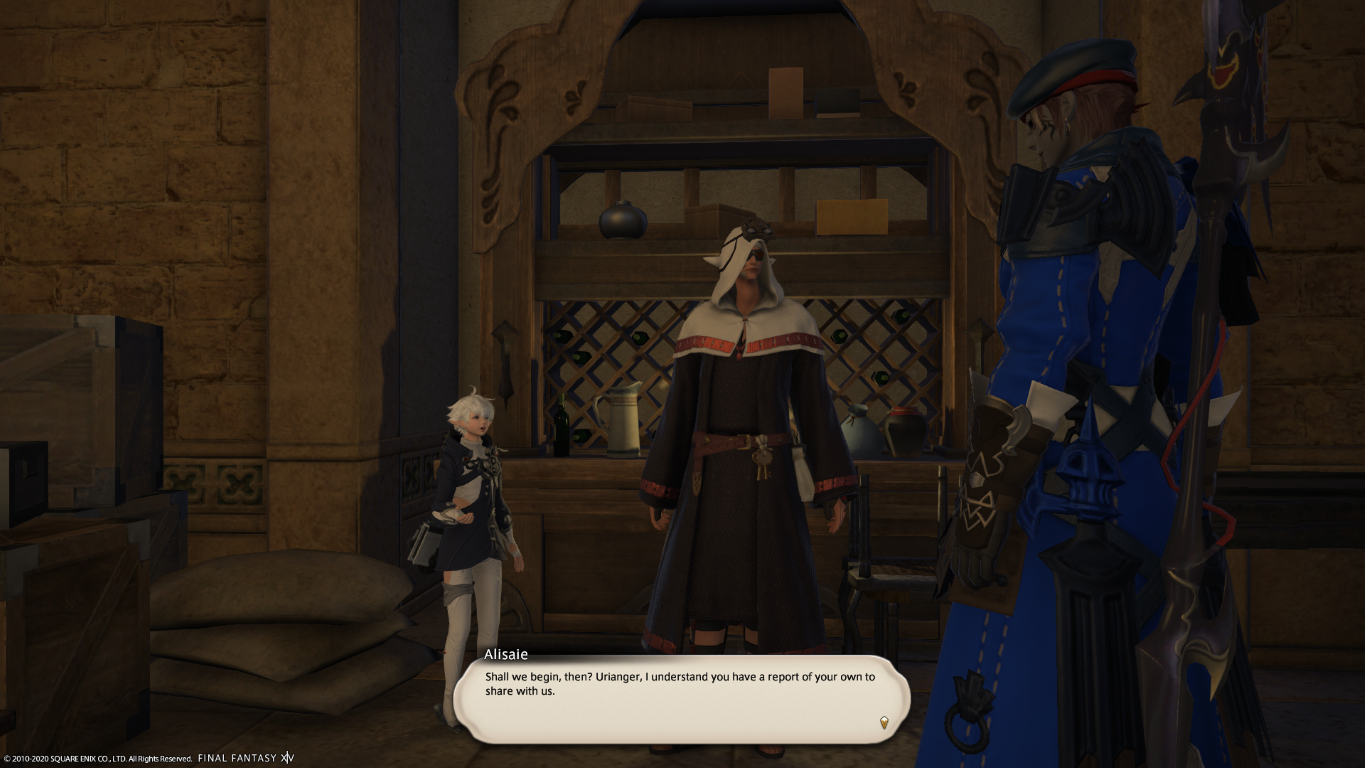 Urianger's got something to report on the aetheric disturbance that corresponded with the roar they heard at Lake Silvertear: it originated at Carteneau Flats. Alisaie concludes that it could only have been Bahamut. Seems that over the past five years, instead of being destroyed, as all had thought, he merely remained dormant beneath Carteneau, regenerating. That would account for the lack of that region's ability to heal, if the primal were absorbing that area's aether to regenerate Himself. And the stronger He gets, the more aether he needs. Just like Ifrit or Garuda, only an order of magnitude greater. 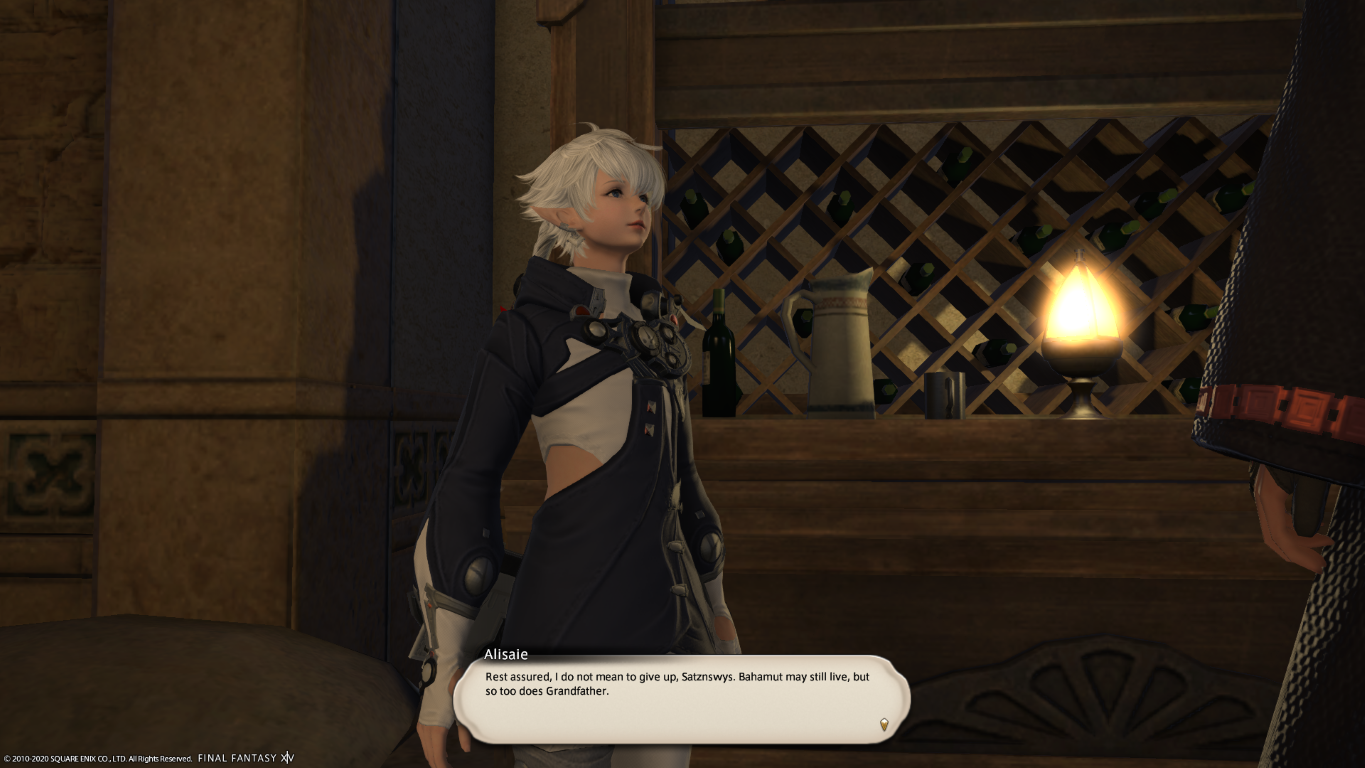 Alisaie believes that Louisoix is keeping an eye on the situation down there, ensuring that Bahamut does not free Himself. Urianger still finds this all a bit hard to believe, but the word of two is much stronger than the word of just one. 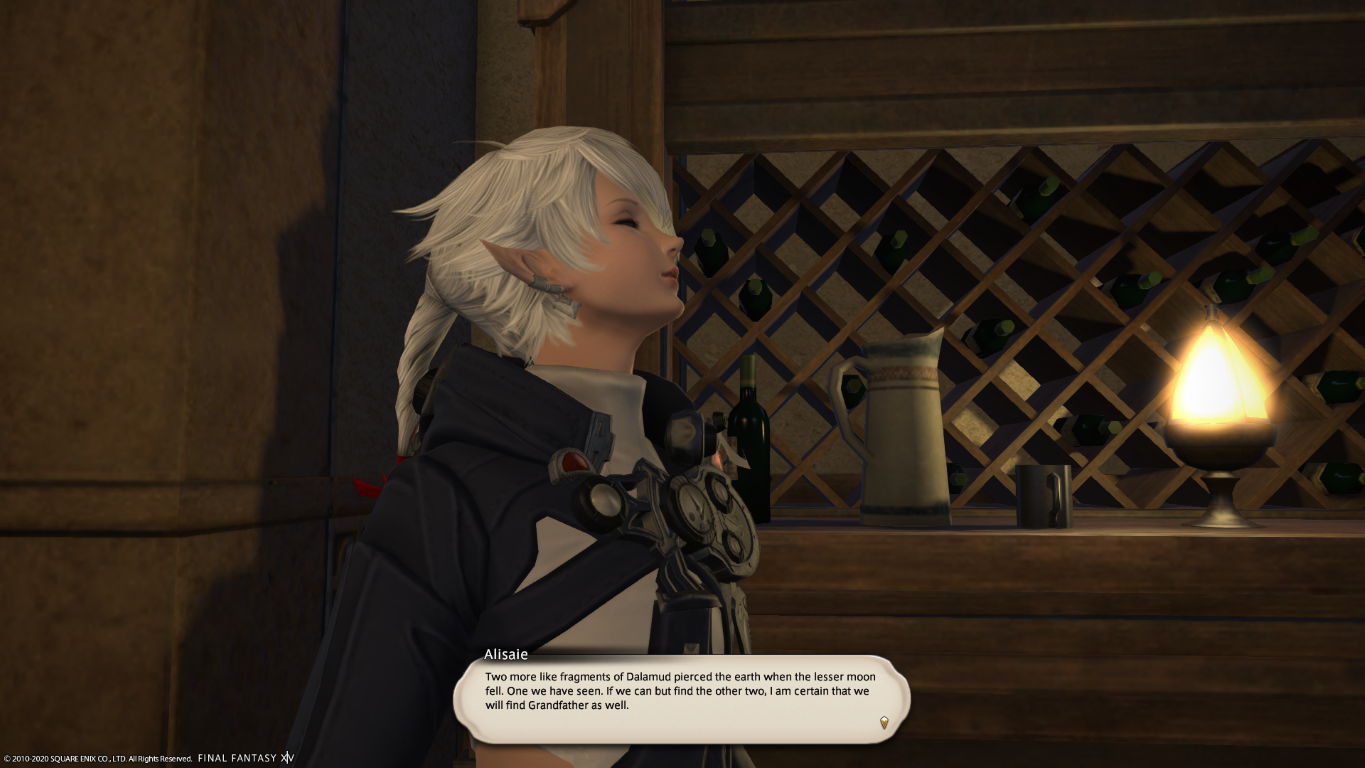 So she's going to search for these other fragments of Dalamud. Urianger suggests alerting the grand companies, but Alisaie says not to worry, because Alphinaud, canny boy that he is, has likely already informed them. Leave that diplomatic rat's nest to the diplomat, and give Alisaie the space to work the field, which plays much more nicely to her strengths. Together, she says, they'll uncover the whole truth of the Calamity. 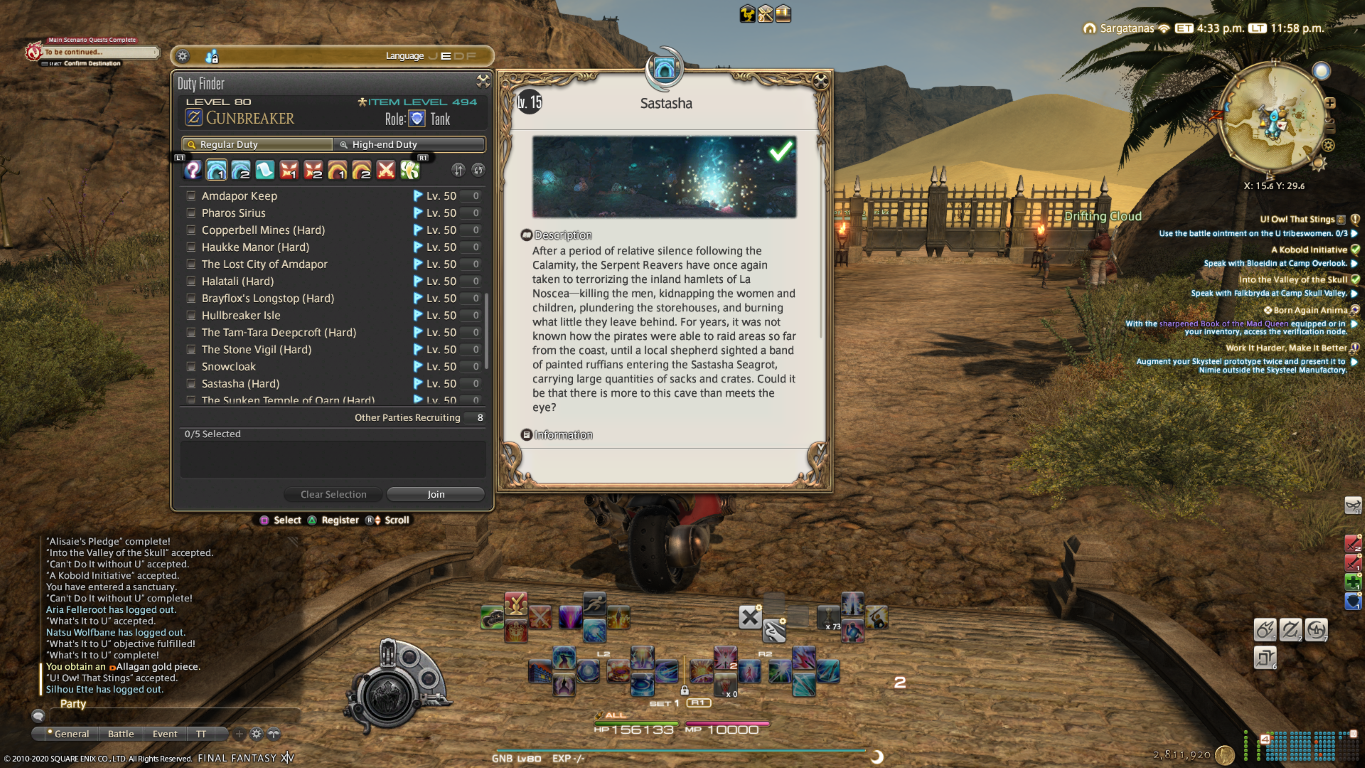 Alright! So, I haven't gotten into this yet, but A Realm Reborn has a LOT of dungeons. and I mean, a LOT. On my main character, Reynn, you can see a lot of these level 50 dungeons, but that isn't even all of them! So I'm going to break things up by showing a dungeon with each update, and this time around, I'm gonna show you Wanderer's Palace, the other post-2.0 dungeon. 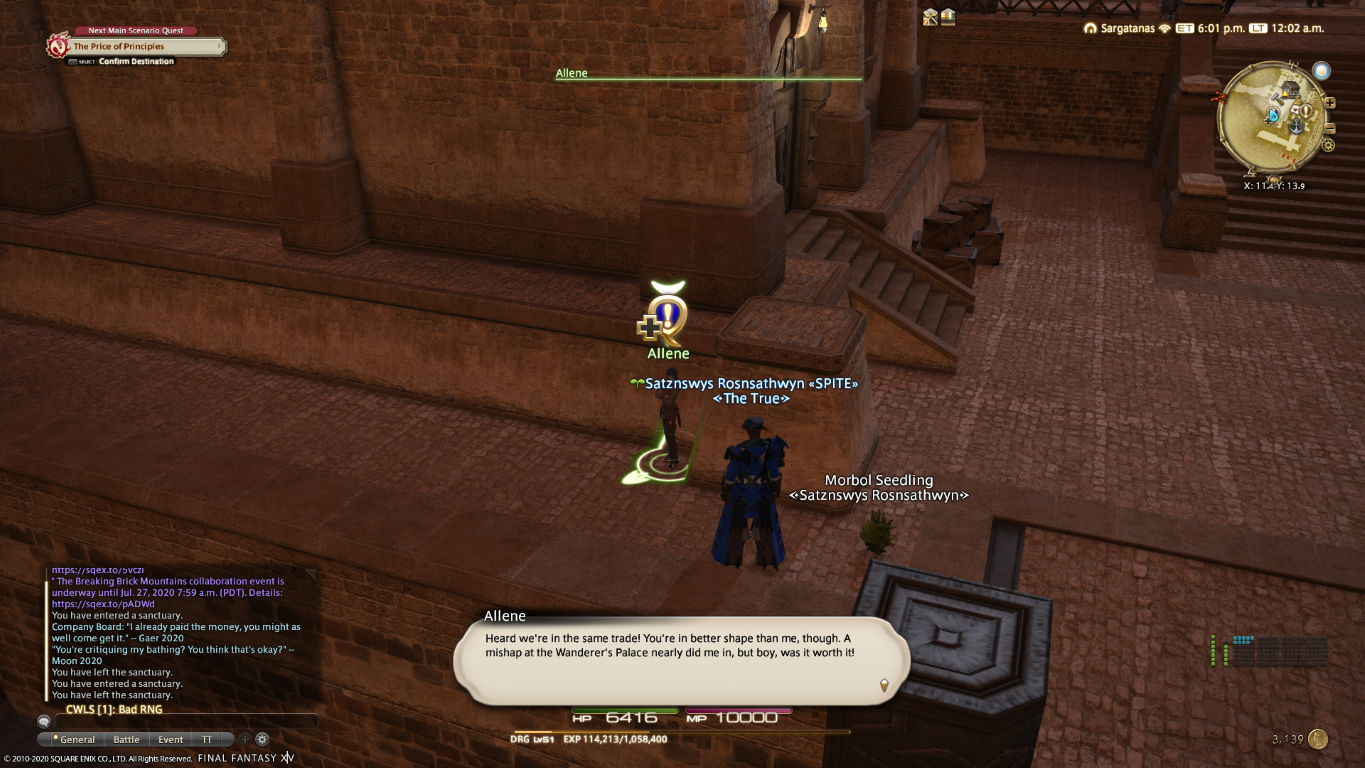 Outside the Waking Sands, Allene's got some work. Seems she got in over her head at the Wanderer's Palace, but managed to make it back in one piece. Once upon a time, Bronze Lake was a lot more full than it is now, but a combination of mining by the kobolds in O'Ghomoro and a little thing called the Seventh Umbral Calamity drained a good portion of Bronze Lake's water. This draining of the lake revealed an ancient temple to Oschon. Allene weaves tales of gold-framed mirrors, untouched by water or the passage of time. She says if Satnzswys is barmy enough to try and make it through, she should speak with an old friend of hers, Abazi Charazi near the camp. 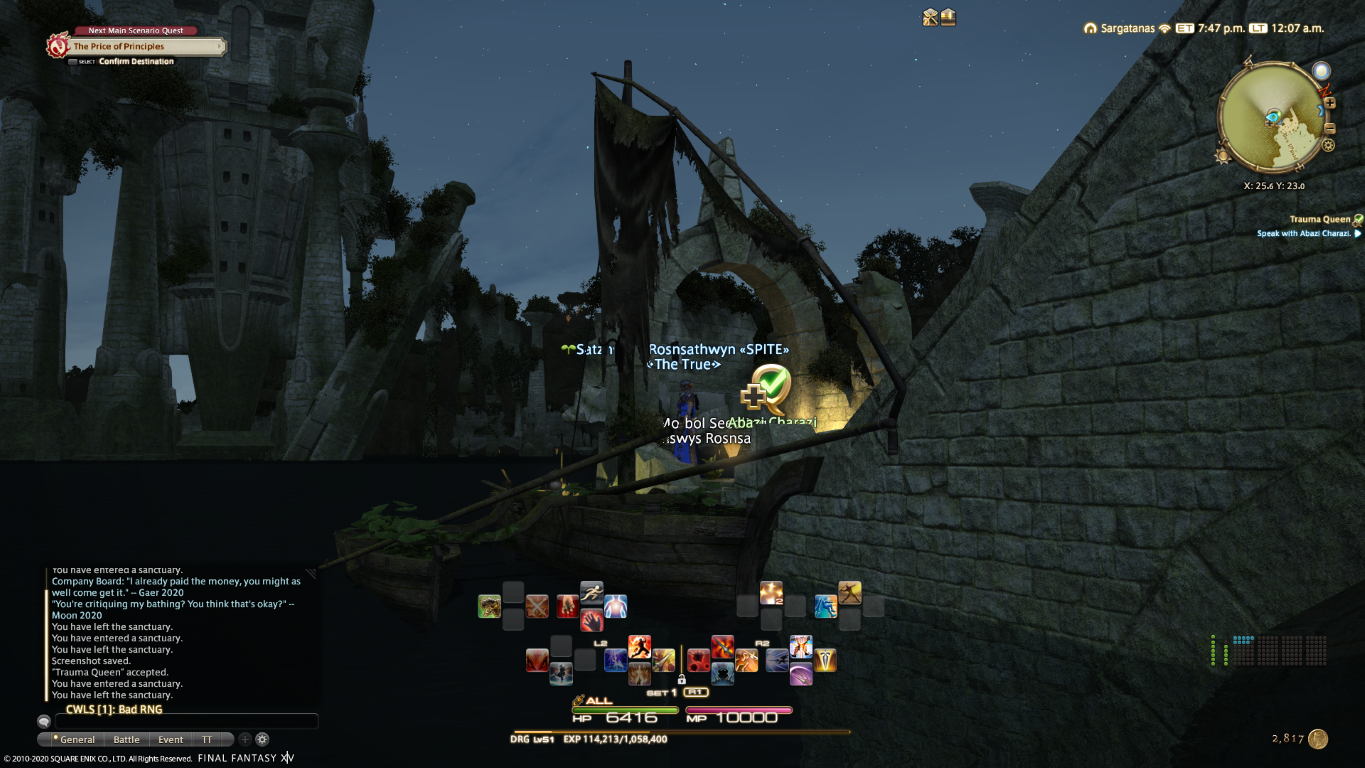 You can see the palace from here. 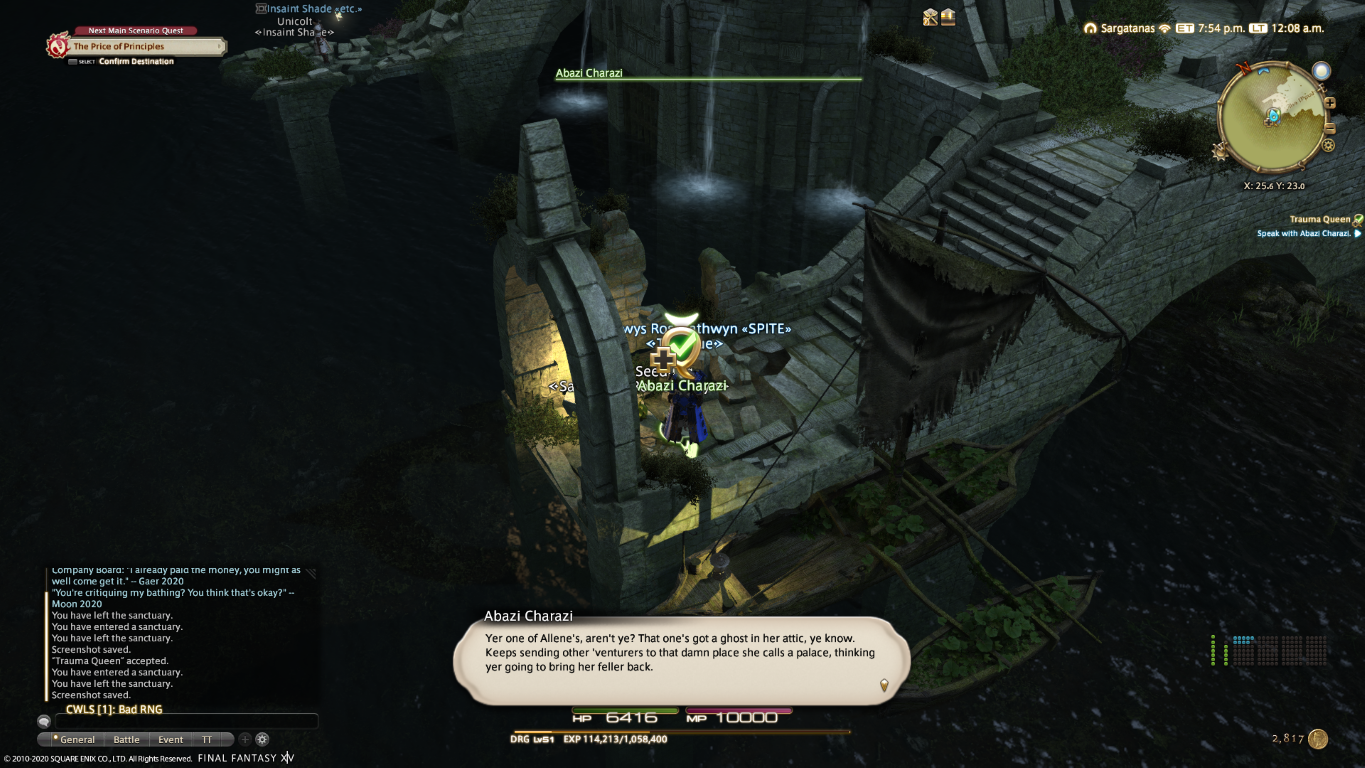 Abazi says that she isn't all there, likely from grief. Her lover met with an ill fate within the Palace: at the end of a tonberry's knife. 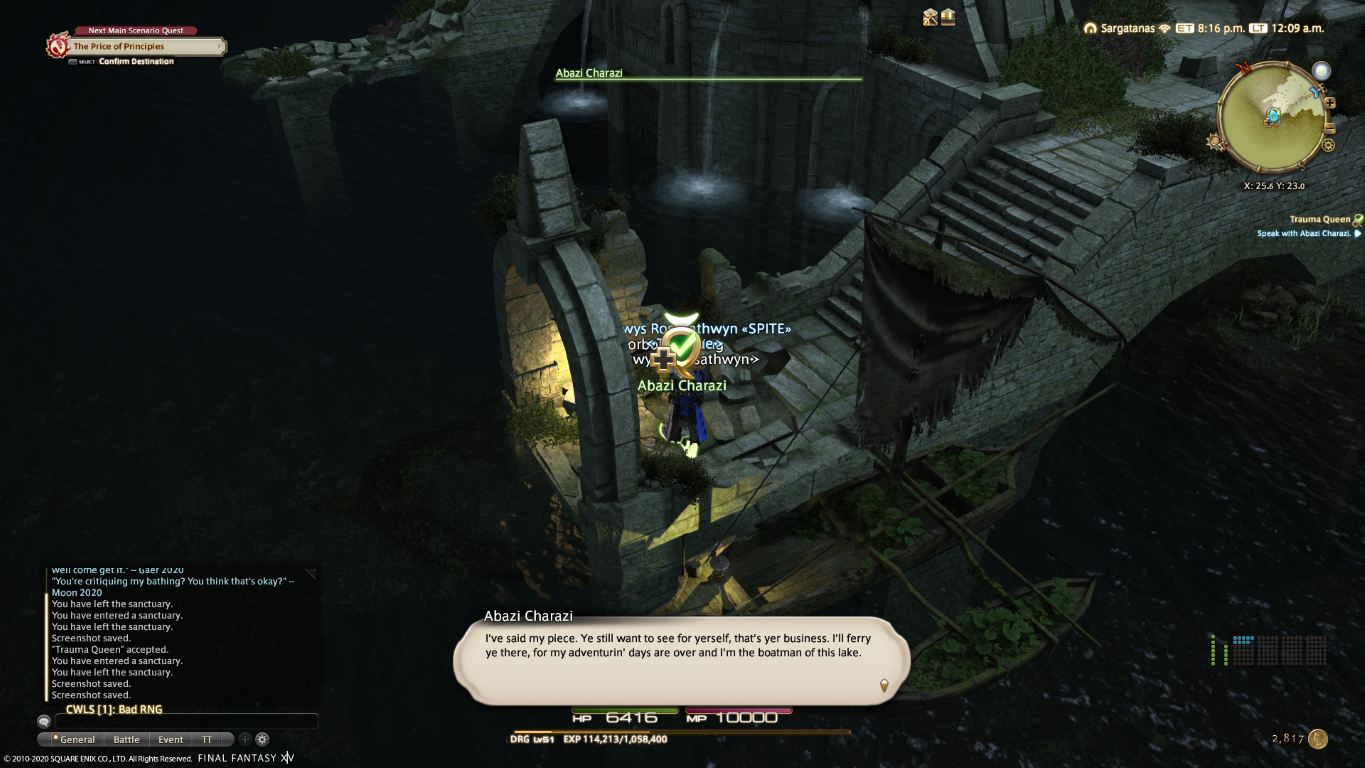 Tragic, but maybe Satznswys can help put her mind at ease, and the memory of these poor lost souls to rest. 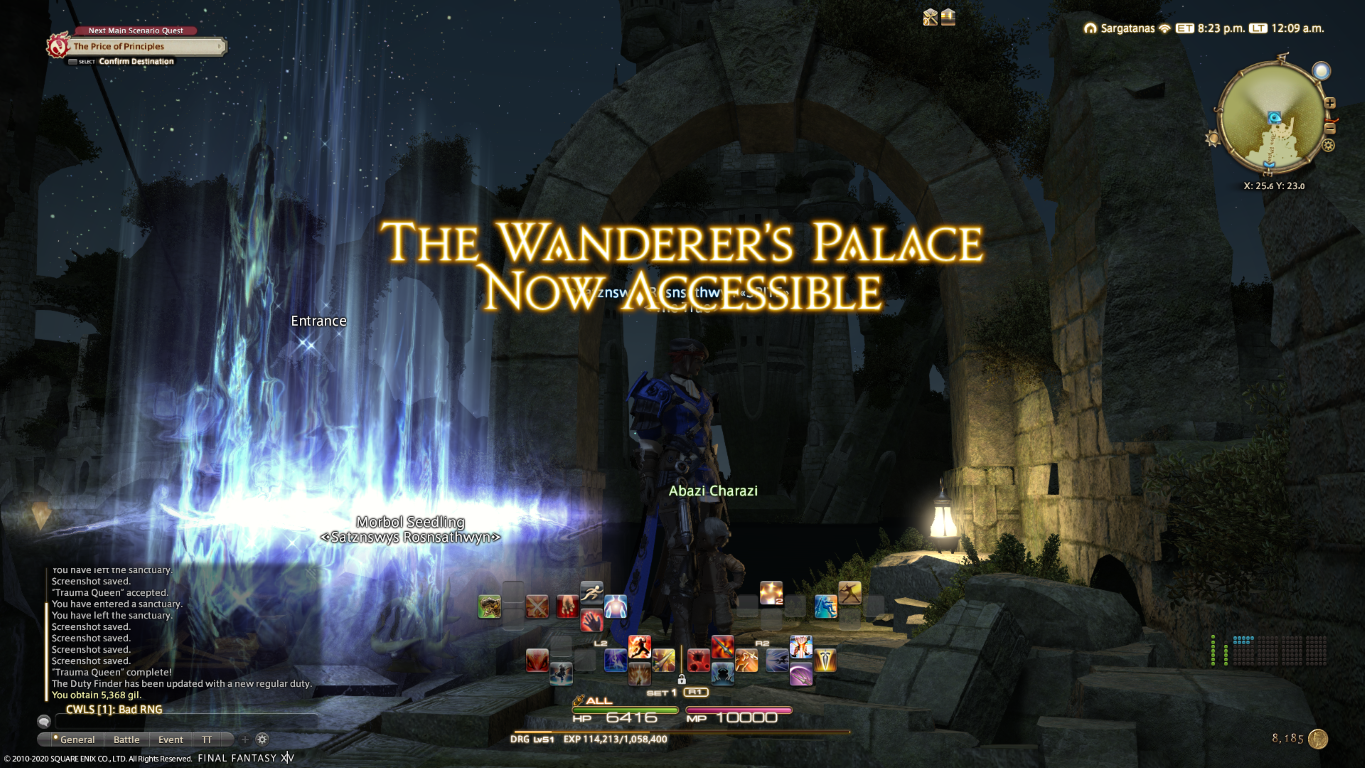 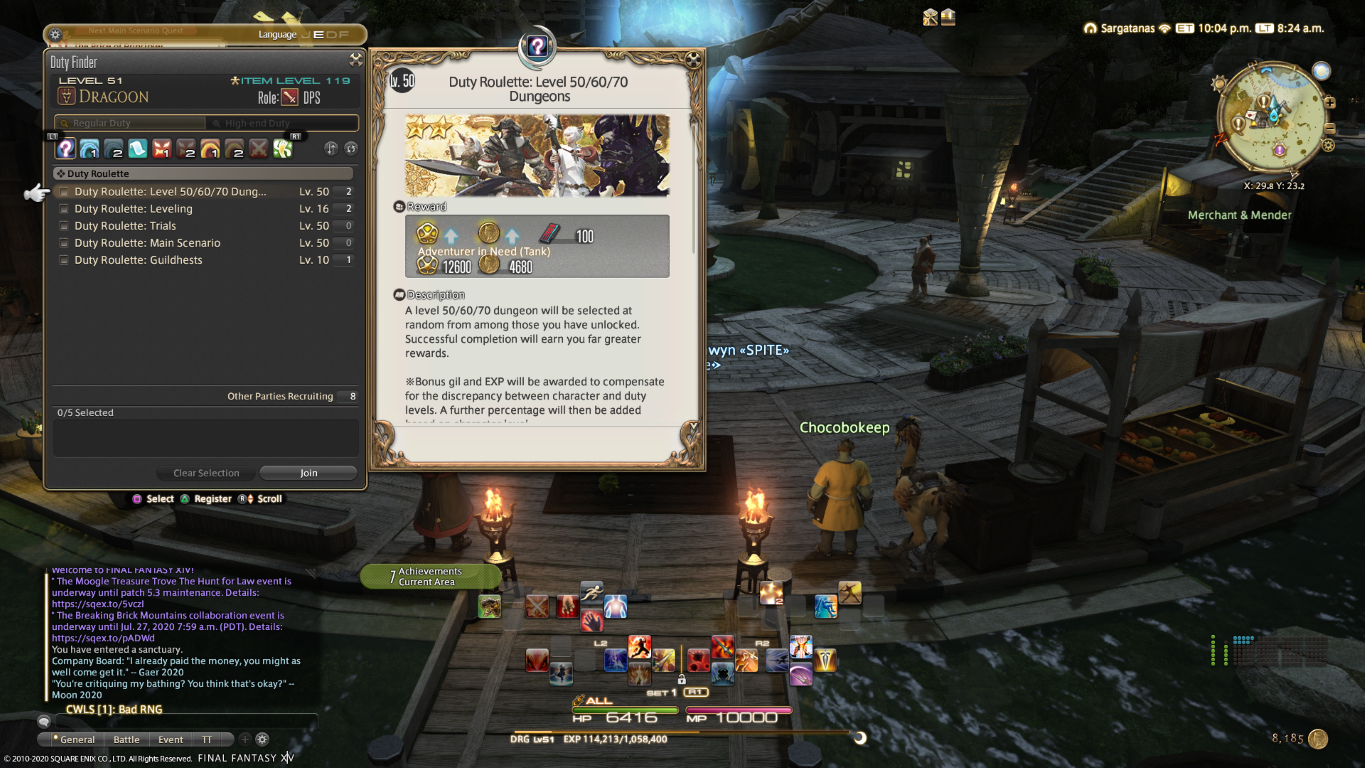 Unlocking a second level 50 dungeon unlocks the Level 50/60/70 Duty Roulette. Like Leveling, it selects a dungeon from Level 50, 60, or 70, that you have unlocked. When unlocking a dungeon in current content, it is added to a duty roulette called Expert Roulette, which contains the 3 or 4 most current dungeons in an expansion. As the dungeons become less and less current, they are rolled into a roulette for the current level cap. For example, now, in Shadowbringers, the level 80 dungeons that were released in 5.0 have been rolled down into a level 80 roulette. Then, when the new expansion is released, those level 80 dungeons will be combined with the dungeons in 50/60/70 roulette, to make a 50/60/70/80 roulette. I really hope they come up with a better name for it. I hope that explained it well enough.

Anyway, completing dungeons at level 50 will earn you tomestones of poetics, and on top of that reward, there is a daily reward of 100 poetics for participating in 50/60/70 roulette. Enough of that explanation, though! Let's get to the dungeon itself.

Why is it that the Wanderer's Palace is so full of these tonberries? It is, indeed, a mystery...one that scholars may one day uncover.

That's gonna do it for today, and next time, Satznswys reunites with the Scions of the Seventh Dawn and sees how things have been developing in the Waking Sands since her victory at Castrum Meridianum.

Turn 1: Caduceus
Fight opens with one main boss; at fixed time points slime adds will spawn. The hexagonal spaces under the slimes will activate, and buff any monsters standing on them (slimes will also require periodic stuns/silences). At roughly 60% on the main boss it will split into a second copy sharing the snapshotted HP, and will need to be separated from the main boss to prevent a stacking damage up buff.

Turn 2: ADS
Expanded version of the Turn 1 door boss; 8 subnodes ring the main ADS node at the center, with each subnode having its own unique ability that is shared with the main ADS node. Each subnode destroyed seals that signature ability on the main node while also granting a related permanent buff to the main node. The main node will use High Voltage and Allagan Rot in addition to the unsealed subnode mechanics; HV is repeated from Turn 1 while Allagan Rot is a two-PC death debuff that needs to be rotated between party members in order to prevent the Rot debuff from timing out and wiping the party. The intended strategy is to pick a selection of subnodes suiting your party composition and destroy them while keeping in mind the roughly 10 minute soft enrage (repeated HV casts), then fight ADS juggling unsealed mechanics and Rot. Wheras the NA strat picked a few nodes, then sat outside the center room until just before the enrage, and then heal through the soft enrage until the healers spent all their MP or the ADS died.

Turn 3: Your Party
No actual boss, it's just a race to the bottom of the cylinder, but none of the monsters tether and will chase you outside of geometry/pathing. Back in the day statics would make a race of it to see who could make it to the bottom the fastest while chainpulling everything they ran into.

Turn 4: Timing
No actual boss, just waves of mechanically interactive monsters of varying types:
Bugs; mini-adds that will tether and feed to Dreadnaughts which will both heal and perma-buff them
Knights/Rooks; Same mob, one has a phys resist barrier (temp hp) the other has mag resist, and come in alternating pairs
Bishops: Small, low hp, but casts a debuff called Pox on their target which will give a longish max HP hit soon after spawn
Dreadnaughts: Big, tanky, mobs that are carefully managed to allow the party to clear the chaff before focusing them down.
All four types will spawn in varying amounts in successive waves, and need to be handled in terms of priority and positioning.

Turn 5: Twintania
The capstone boss for the First Coil; she will summon mini dragons and drop targeted aoes+puddles immediately after pulling, then shift into fireball phase. These fireballs will damage and apply a fire resist debuff on hit, and Twin will occasionally jail a targeted player+area ala Titan HM, and once brought down below a certain percentage she will break her rotating collar which will drop to the field and fly off. That signifies the transition to divebomb phase, where she will be untargetable and occasionally hit a player+aoe for damage and knockback, and halfway through this phase two more sets of adds will spawn that need to be taken down. The second set will roughly coincide with the next phase, which requires the party to stack in the neurolink field (collar area) for an extreme raidwide that Twin greets the party with on her return to the field. This last phase includes the occasional add, which will stun a random player and slowly approach them (touch equalling instadeath), the targeted aoe+puddle fireballs from the first phase, and Twisters. Twisters generate an insta-kill aoe centered around each player that are dodged by moving during the cast (and unexploded ones look like a gust of wind on the floor).

I'm still taking votes for what job Satznswys is going to be when we go into Heavensward, so by all means, please let me know what you want to see!