So as those who follow me on Twitter know, during my time away from TT I got heavily into knitting. It started as something to do while I listened to podcasts. I don't like sitting or laying idle while listening to them, but it takes a specific kind of activity for me not to lose the thread of what I'm listening to. It used to be that playing Picross fit the bill perfectly as something that engaged a totally different and non-overlapping part of my brain. But new podcast episodes come out way more frequently than new Picross games, so I was looking for something else, and knitting turns out to engage my brain (and hands) in exactly the same way. And as a bonus, I come away with actual tangible stuff that I can give to people. (In the almost three years that I've been knitting, I've only made three or four things for myself.)

I started out using one of those plastic looms, with which I made a baby hat for a coworker, and then a (very long!) scarf for my mom as a Christmas present. After that, I found an online tutorial to make small drawstring bags, and cranked out a couple dozen dice bags for just about everyone I knew into TTRPGs. (I think Shivam has one of these.) But at this point, I was starting to feel like the loom was training wheels and I was ready to graduate to "real" knitting.

So I took some courses at a local yarn shop and learned how to knit stockinette, seed stitch, and in the round, making some potholders/coasters and some pink hats for me and friends to take part in the local Women's March. At the march, I happened to run into some coworkers who were there completely separately from our group, and when I told them I was the one who made our hats, they said we should start a knitting circle at the office. I've learned a ton from them and worked my way up to progressively more complicated patterns; now the stuff I can make actually looks sort of impressive.

Anyway, I thought about making this a thread for my own knitting, but given that I have a Ravelry account already where I post my stuff, it feels like this would just end up being a mirror of that. So let's make this a thread for all the fiber arts enthusiasts around here!

Here's what I'm working on right now, which I haven't gotten around to uploading to Ravelry yet. I'm just starting the lace portion of this shawl; up to now, it's been row after row after row of seed stitch. I put a lifeline in when I was done with all of that; I'm trying to get more in the habit of using those so I don't have to start all the way over when I screw up once on a complicated pattern. (Because I screw up all the time, you see.)

That is very cool Nich. And, a much better use of spare time than what I do (doom scrolling). My brother recently started doing crossstitch and has been really secretive about it.

I used to do a lot of cross stitch and blackwork embroidery. Then I had a kid and started grad school. Hopefully by the time I'm done with Grad school I'll be able to do some more of this work; I find it really fun!

knitting is something i've been meaning to pick up for a few years now...because of pop'n music. but also because i'm interested in having a lower-key pastime to engage in with some kind of tangible outcome, and i'm not really as into origami as i was when i was young. (although i've done a bit lately, for the first time in a while) but like a lot of things, i've been a little intimidated and overwhelmed trying to figure out where to start; it's definitely one of those things where having someone in person would make it a bit easier to get going on it.

Obviously there are issues with taking classes at the moment, but in a safer moment, Knitmap is a good yarn store locator that you can filter for shops that offer classes. (I agree with you; I find learning from video tutorials almost impossible. Every new technique I've picked up has been from either a class or someone in my weekly knitting circle.) 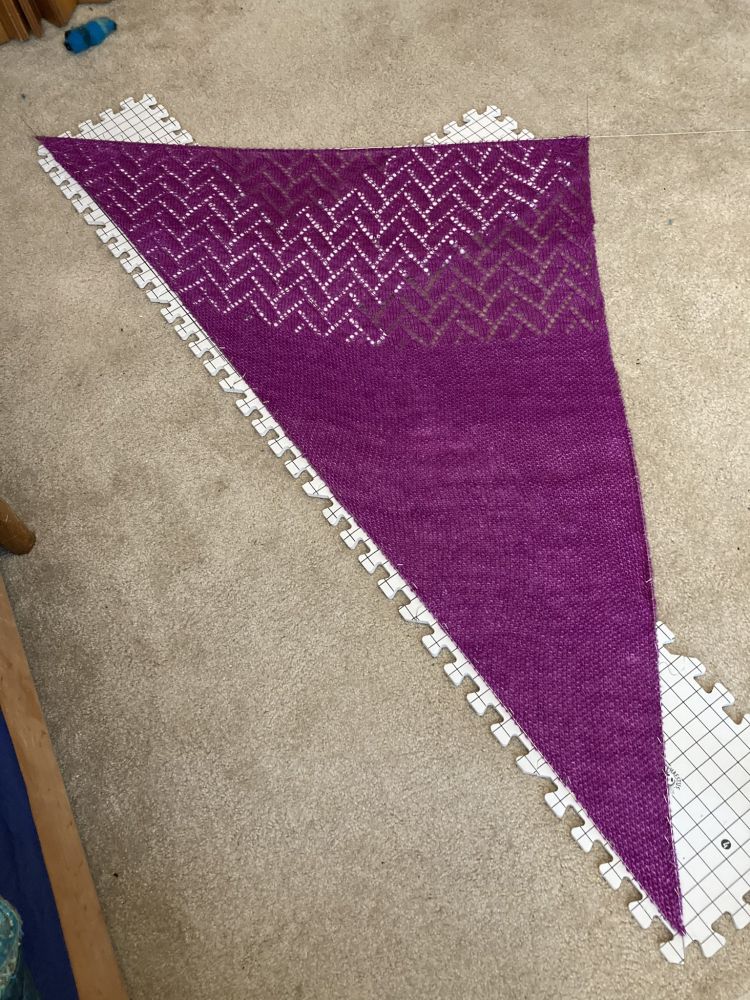 Here's the final shawl, laid out on blocking boards to dry!

Yo, dude. Nice work! Especially with the pattern you've got in there.

What's it drying from? An initial wash? Some kind of dye?

"Blocking," in knitting, is the process of giving the piece a final shape. The way you do that is to soak it in warm water for 20 minutes--some people add blocking wash to this, I don't--wring out the excess water, and then lay it out the way you want it while it's still damp. In this case, I stretched it a bit to the dimensions specified in the pattern, pinned it to the boards to keep it that way, and then ran blocking wires through the edges to avoid finning from the pins. Once everything was in place, I let it rest for a few hours to completely dry before removing the wires and pins, and when I did, it kept the shape and size I'd fixed it to.

This step is honestly optional a lot of the time, I don't think it would have looked a lot worse if I hadn't done it. But it's a gift for someone so I wanted it to look nice.

It looks really nice! How long did it take?

Finished a new thing. I make dice bags for just about anybody I play TTRPGs with in real life, and I recently found a cool new pattern, so I've been making a new set for my main D&D group. Here's the first try: 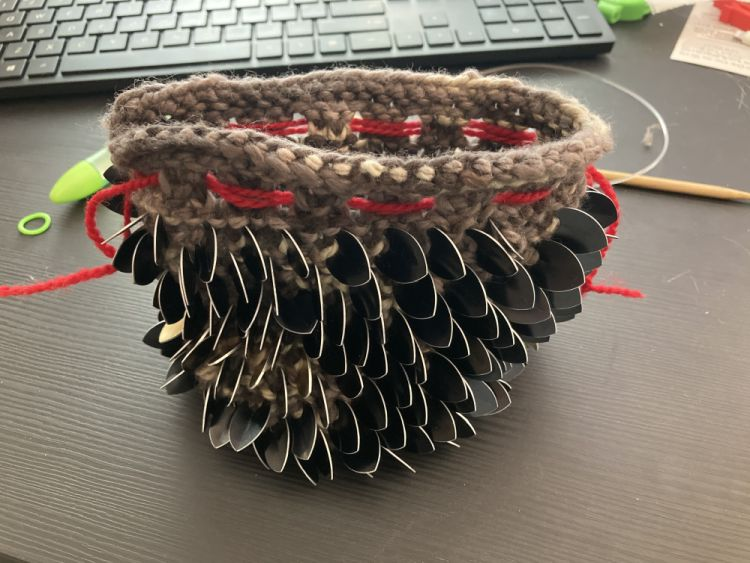 The pattern uses small aluminum scales that I got from The Ring Lord, knitted into the purl rows of the garter stitch body. It doesn't quite look like the pattern--the scales are supposed to hang downward, not horizontally, and I think my tight knitting might be to blame here. I also put the scales on the wrong way, so their backs are more visible. But I've got a few more of these to turn out, so hopefully my technique improves as I go.

A hedgehog bag of holding!

Here's my first attempt at knitting socks. It went pretty well, for the most part! There are a few small flaws that bother me but don't actually matter. My only worry now is that they won't fit the person I knitted them for... 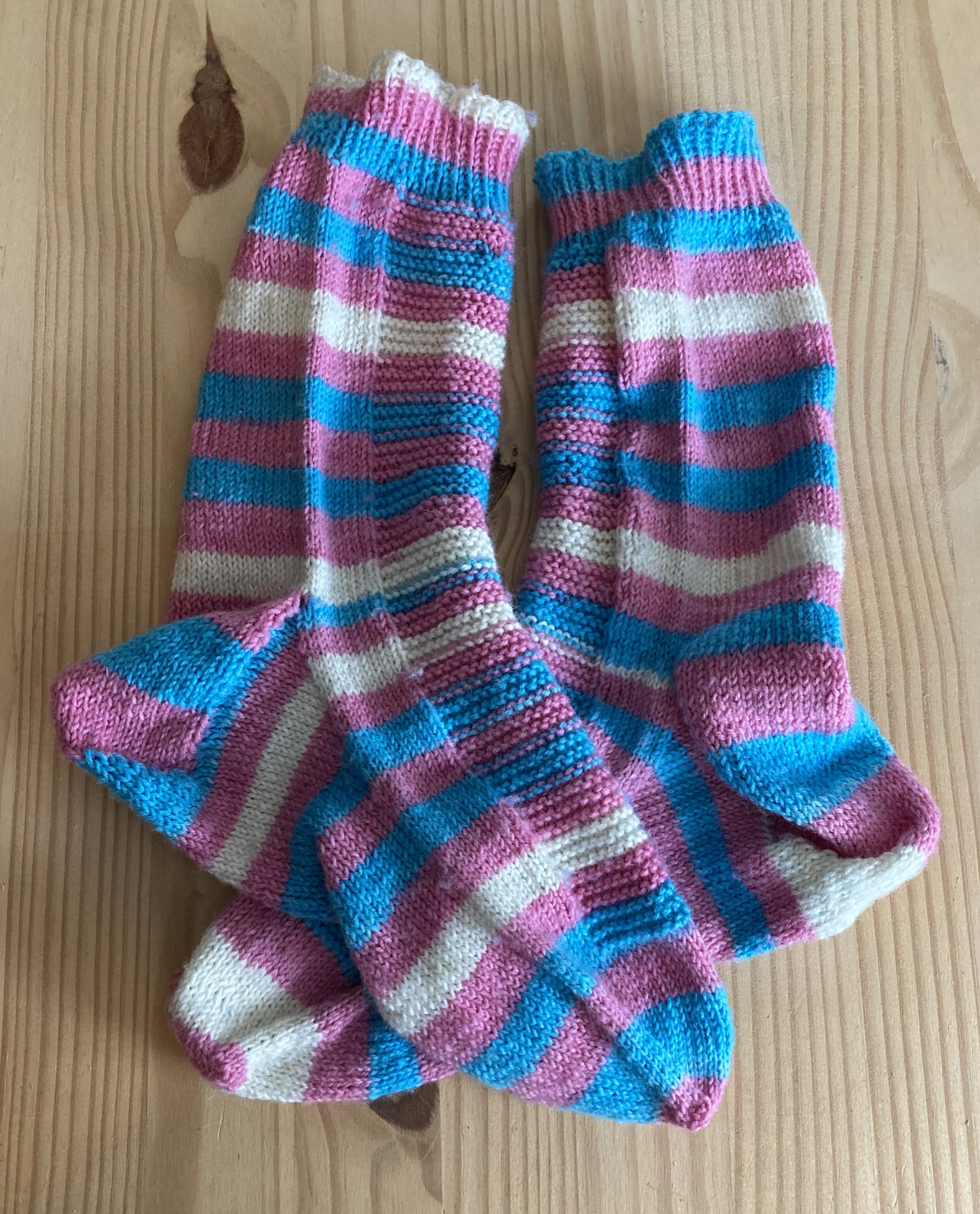