Blood for the Blood God! Talking about Warhammer 40,000

The Warhammer 40,000 universe is near and dear to me, having grown up reading various issues of White Dwarf and other books from Games Workshop, though I haven't actually played the game a whole lot, and only did some half-hearted attempts at assembling and painting the miniatures back in the day. I guess I enjoy reading about its strange, detailed and sometimes contradictory universe more, so I'll start with a quick summary of all the major factions, for those who don't know about them:

The Imperium of Man is the big, dystopic, fascistic theocracy in wich the humans of the 41st millennium live. It's supposedly ruled by a half-dead vegetable stuck on a Golden Throne, know only as The Emperor of Mankind, though the day-to-day ruling is done by an enormous bureaucracy and galaxy-spanning Emperor-worshipping church. They have several different armies, including the iconic Space Marines, genetically engineered and religiously fanatic supersoldiers in thick armour and with heavy weapons. There's also the more numerous Imperial Guard, which consists of regular human soldiers who are often depicted dying in droves, and only being able to beat their enemies by drowning them in bodies (or use their huge tanks to shoot them). Then there's the Sisters of Battle, fighting nuns armed with the same weapons and armor as Space Marines, but without genetic enhancements. They make up for this by being even more religiously fanatic, and by having some actual, immortal, angels fighting for them. Worth mentioning also are the Adeptus Mechanicus, which is a weird priesthood of cyborgs who worships The Machine God and sees all technology as holy, and the Inquisition, highly skilled agents travelling through the Imperium and fighting conspiracies and other threats that can't be defeated with huge armies (including, of course, people who aren't really on board with this whole fascist theocracy thing).

The main enemy (though they do have many) of the Imperium is probably Chaos, terrible demons from the horrifying Warp dimension (a dimension the Imperium reluctantly has to use to make space-travel between stars possible). The demons and other Chaos worshippers generally belong to one of four Chaos Gods: Khorne (the Blood God, who likes war), Tzeentch (who likes magic, and constructing complex conspiracies), Nurgle (god of diseases) and Slaanesh (god of hedonistic pleasure). Chief among its soldiers are the Chaos Space Marines, who are Imperial Space Marines corrupted by Chaos.

The Orks are green-skinned savage warriors who enjoys fighting wars above all else, no matter if it's against other species or among themselves. They're something of the "comic relief" of the Warhammer 40,000 universe, due to being humorously stupid with primitive technology that yet somehow is surprisingly effective.

The Eldar are basically space elves, with all that entails. Pointy ears, ancient history, dying species remembering their old glory days, highly advanced technology, and generally snooty disposition towards the "lesser" species, including humans. Fast, but fragile. Their evil cousins are the Dark Eldar, who are quite possibly the most evil species in the Warhammer 40,000 universe (and that's saying something!), since they are basically vampires who can only survive by torturing people and feeding on their suffering.

The Tyranids are your typical horde of animal bug-aliens with organic technology, who travels around the galaxy to consume all life on any planet they come across. Most notably, they have the sinister Genestealers, who can infiltrate planets ahead of the main swarm, and set up secret cults of human/genestealer hybrids that break down the planet's defenses from within. 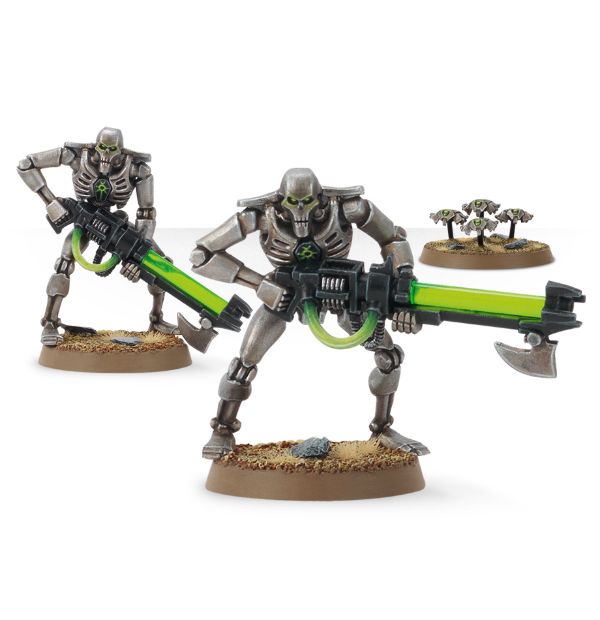 The Necrons are space-Egyptian robot skeletons who are even more ancient than the eldar. In the original fiction, they were mindless robots ruled over by Lovecraftian alien gods called the C'Tan, but later there was a big retcon, giving the robots actual personalities, and depicting them as having defeated the C'Tan and made them unwilling servants.

The Tau is the youngest species with any influence on the galaxy, with blue skin and modern technology. Unlike basically every other faction, they are actually somewhat idealistic and optimistic, and often try diplomacy instead of attacking everything in sight (with mixed results). When they do fight, their armies have several units that are obviously inspired by anime mechas (including a possible Char clone?).

Oh, and there's the Squats, who are space dwarfs in the same way the eldar are space elves. But they basically disappeared after the second edition of the game, and later it was retconned that they had been eaten by the Tyranids, with only a few survivors scattered across the galaxy.
Last edited: Sep 3, 2020

Woo! Blood for the Blood God and Skulls for the Skull Throne. I was big into 40k for about 10 years or so. I had three armies (Ultramarines, Tyranid, and Necron.) I do love all the world building and grim darkness of it all. The recent video games in the last decade have also been good.

Staff member
I gave away my mostly unpainted, very rarely played Dark Eldar army earlier this year when I moved.

Repeatedly tempted to pick up either a squad of Fire Warriors or Wraithguard just to paint, but I know where that leads.

Also spent some time poking at the 40k TTS community resources and the modern rules, but so far haven't moved beyond looking at them ...


Falselogic said:
Woo! Blood for the Blood God and Skulls for the Skull Throne. I was big into 40k for about 10 years or so. I had three armies (Ultramarines, Tyranid, and Necron.) I do love all the world building and grim darkness of it all. The recent video games in the last decade have also been good.
Click to expand...

Damnit, False, if I had know that I'd have brought my old army to Talcon.

And then I might have actually been able to play someone! One of the reasons I got out of the game was, beyond finding a block of time to play, finding good people to play with was difficult.

Staff member
Right? I think I’ve played that army vs. like 2 people in ~20 years.

As for me, whenever I start thinking about playing the game seriously, it usually ends with "wait, it costs how much?" And then I run back to relatively cheaper and simpler X-Wing.

I used to play in a WH40k: Rogue Trader RPG campaign five-ish years ago. It was fun, but my character was a Missionary, which felt like an underpowered archetype choice as the game progressed - all the others seemed to have cooler skill sets in and out of combat. 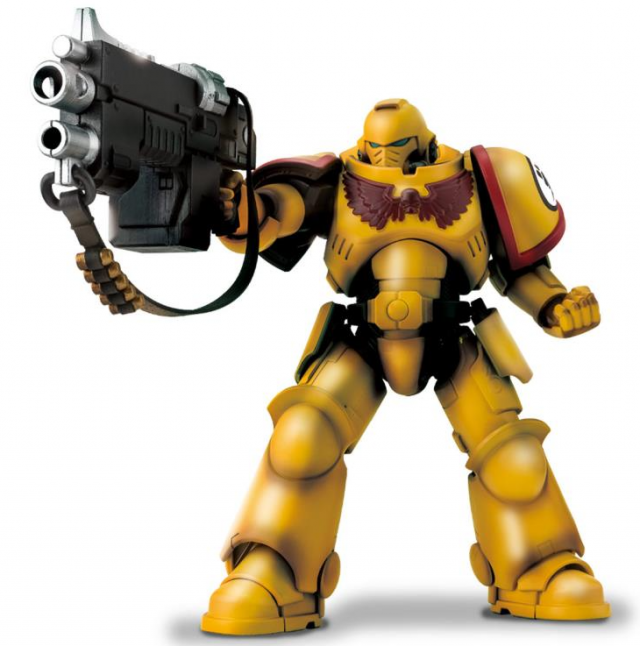 Honestly surprised it took this long.

I'd really hope for some helmet variants, maybe even the classic "beakie" helmet: 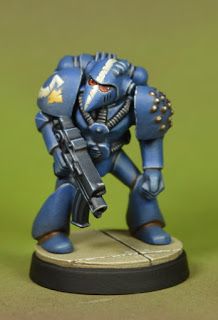 Looks about right for a storm bolter

Are you sure it's not just the one?

I've read the novels and played the video games, but never touched the actual minis game. Lately I've really been intrigued by the One Page Rules system and the idea of playing via Tabletop Simulator, which would sidestep a lot of the issues I have with playing actual WH40K like cost, time investment, and rules complexity.

Sisters doing it for themselves the Emperor

I have a sizeable Tau army, a huge orc army that was mostly given to me, and a medium size Night Lords army. I haven't played in 3 years, except a little TTS, mainly because I don't like playing against strangers and my brother lives way far away.

I think I've finally also reached the realization that bigger games with more models aren't necessarily more fun than small games. In fact the overhead of painting time, setup, and hours to play out a match can make it less fun.

I think I'm going to go back to only having Tau for the odd game here and there, and otherwise focus on fantasy models that I can use in a wider variety of games.

So apparently there's been a recent push of new Warhammer 40,000-related media. There's a Marvel comic about Space Marines (written by Kieron Gillen!), trailers for an animated series about other Space Marines, and plans for a live action series about Inquisitors. 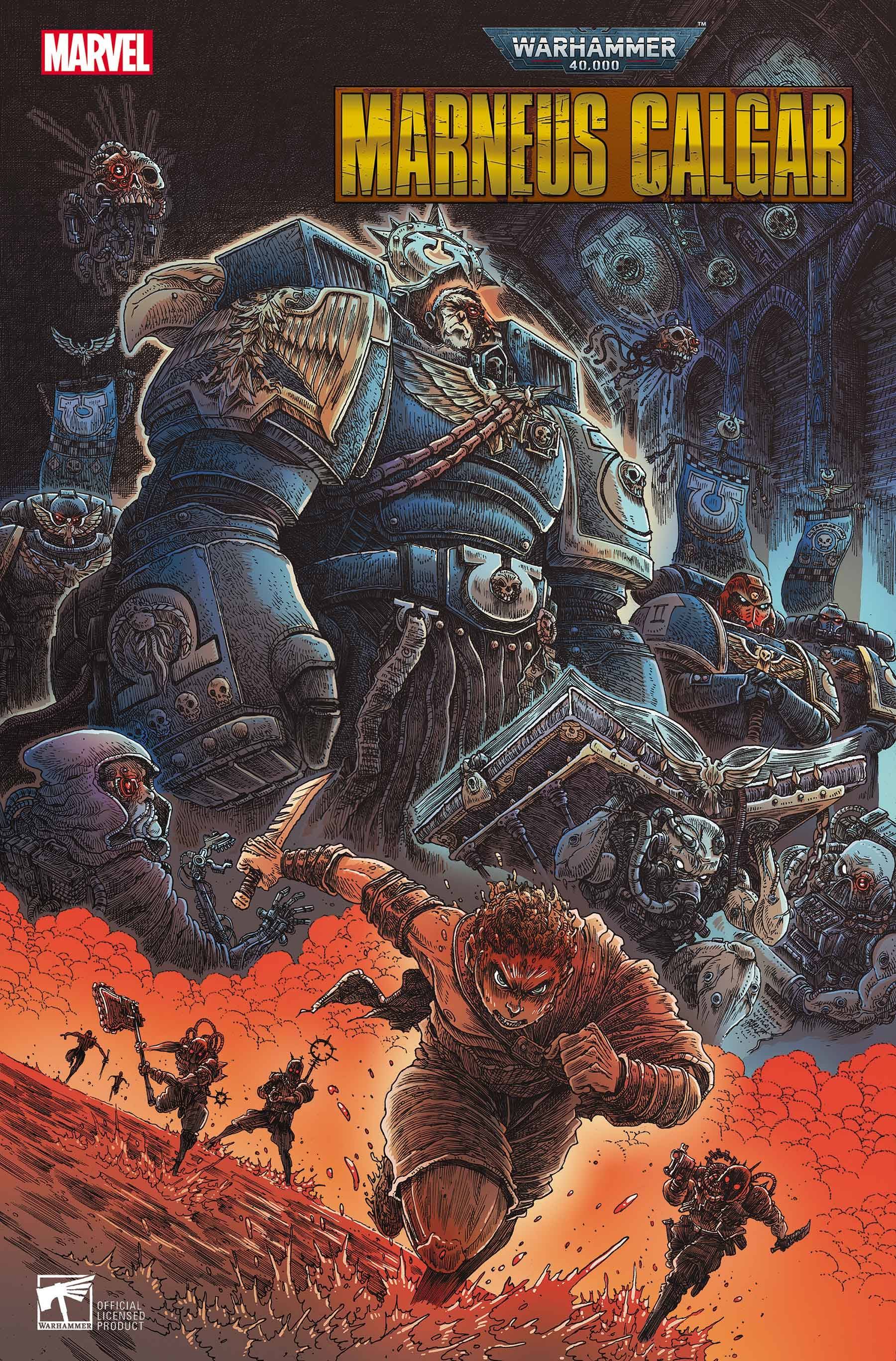 From a personal point of view I think the only faction I could play with no major hangups are the Tau. Everyone else is just so effed up.

Or the Orks. At least they're straightforward.

I loved the Necrons but that's got to be at least two editions back...

Inscrutable Metal Space Mummies only really works as a faction as long as they're inscrutable. Now that GW is starting to explain them a bit it turns out they're not super different from the other grimdarkess going on. Oops?

I think I tuned out once someone explained that:

A: They're basically a bunch of trans-sentient mortals who were more or less conned into being uploaded into robot shells by an ancient race of Cthulus (same gits who made both the Eldar and Orks, apparently?), and then rebelled against their creators because they were not amused about having all their emotions stripped away. Except pain, because, y'know, 40k and all.

But MB, you ask, that's only point A in what is undoubtedly a long-winded explanation of B-Z, where's the rest?

And I'd answer that point A is all anyone ever needed to know about them as a faction (please, keep inventing absurd units, it's great), and B through Z are there to get 40k lore nerds to fight over minutiae that doesn't match between books/comics/games, especially because GW has a bad habit of just changing the backstories of the non-human or ork factions with new rulebook releases.

This is not 40k only, but Humble Audiobook Bundle has a LOT of stuff for the usual cheap Humble price: https://www.humblebundle.com/books/...medium=product_tile&hmb_campaign=tile_index_1

Daikaiju said:
From a personal point of view I think the only faction I could play with no major hangups are the Tau. Everyone else is just so effed up.

Or the Orks. At least they're straightforward.
Click to expand...

The thing about the Tau is, in most other science fiction settings they would be bad guys (an expansionist empire with an extremely strict caste system and what amounts to a religious dedication to their leaders, leaders who may or may not be using some kind of pheromone mind control, and also it's been hinted that maybe they're sterilizing any humans who comes to join them). It's just that in the Warhammer 40,000 universe, they're probably the closest thing to "good guys" there is (with maybe the Craftworld Eldar being a contender, if you can forgive their snobbishness and tendency to manipulate the "lesser" species to their own ends).

As I've said in previous threads on the old forums, the Orks are kind of fascinating since they seem to be the only species who are genuinely enjoying themselves all the time.

The Tau caste system isn't an economic one, which helps. And yeah, forcing other species to conform (within reason) and using diplomacy whenever available is better than a policy of only genocide and neverending wars of attrition. It's also a socialist society where everyone has their basic needs met and women are treated equally, and maybe only the Eldar are similar in that way.

You weren't kidding about the push to broaden the appeal...

Sisters STILL doing it for the Emperor.