Welcome to the FINAL FOUR​
We're gonna take a slightly different tack here, and go in depth on our finalists. 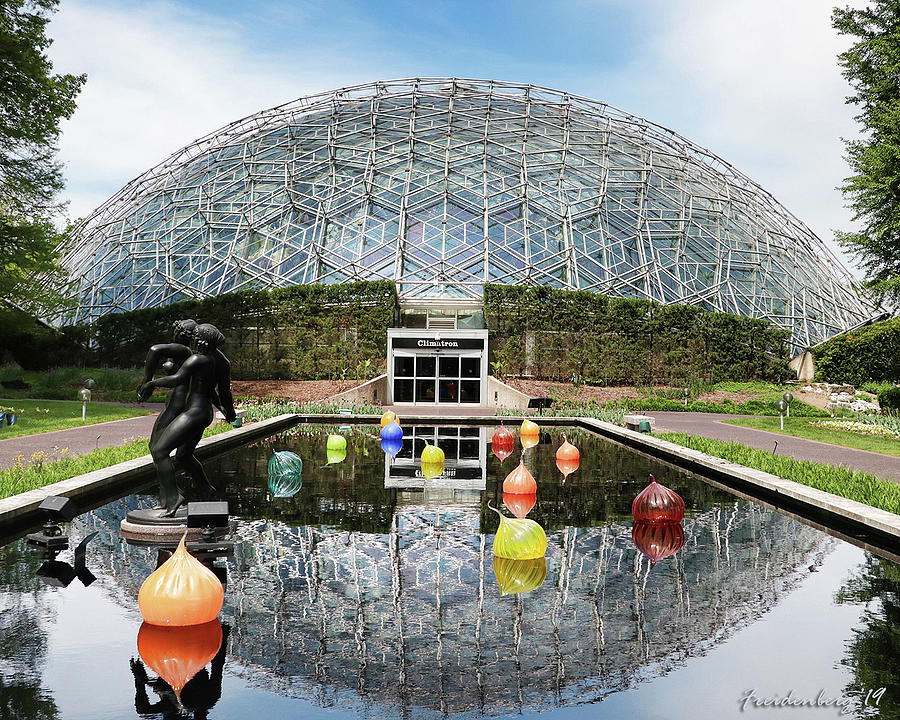 From Wikipedia, the free encyclopedia

Jump to navigation Jump to search

The Climatron greenhouse at the Missouri Botanical Garden, side entrance, 2004

The Climatron is a greenhouse enclosed in a geodesic dome that is part of the Missouri Botanical Garden in St. Louis. Initiated by then Garden director Frits W. Went, the dome is the world's first completely air-conditioned greenhouse and the first geodesic dome to be enclosed in rigid Plexiglass (Perspex) panels. Completed in 1960, it was designed by T. C. Howard, of Synergetics, Inc., Raleigh, North Carolina.[1] The broad climatic range within the dome, which recreates a lowland rain forest, is achieved by sophisticated climate controls without using interior partitions.[2]

The structure is an unpartitioned half-sphere dome, 42 m in diameter and 21 m high. The frame is supported by aluminum tubes under compression and aluminum rods under tension. The St. Louis architects Murphy and Mackey were the architects on record. Synergetics, Inc were the designers of the dome. The architects received the 1961 R. S. Reynolds Memorial Award of $25,000 for their architectural use of aluminum. In 1976 it was named one of the 100 most significant architectural achievements in United States history.[3]

The dome contains a small stone pre-existing neo-classical pavilion and over 400 varieties of plant life. A bank of 24 flood lights, revolving at night in five-minute cycles, simulates noon light on one side of the dome and moonlight on other side. The climate ranges from the Amazon through Hawaii and Java to India.

Over time, the building experienced deterioration of the original Plexiglas panels and the adverse effect of humidity on some metal elements.[2] The greenhouse was closed for extensive renovations in 1988 and reopened in March 1990.[3] The original Plexiglas glazing was replaced with 2,425 panes of heat-strengthened glass (containing a plastic interlayer called Saflex) and coated with a low-emissivity film. In 2010, the Botanical Garden celebrated the 50th anniversary of the Climatron.[4]
Click to expand...

The Hall Of Doom The HoD was first conceived in 1978 for the long running Superfriends show, specifically Challenge of The Superfriends. This now iconic HQ of Heinousness debuted in show's new introduction, also marking an end to the Marvin, Wendy and Wonder Dog characters.
Since then it has been embedded in the public consciousness and realized in comics and television.
The HoD is also a mobile battlestation with significant armament and totally does NOT look like a certain Dark Lord, thenkyewverymuch.

For our Final Mirror Match; 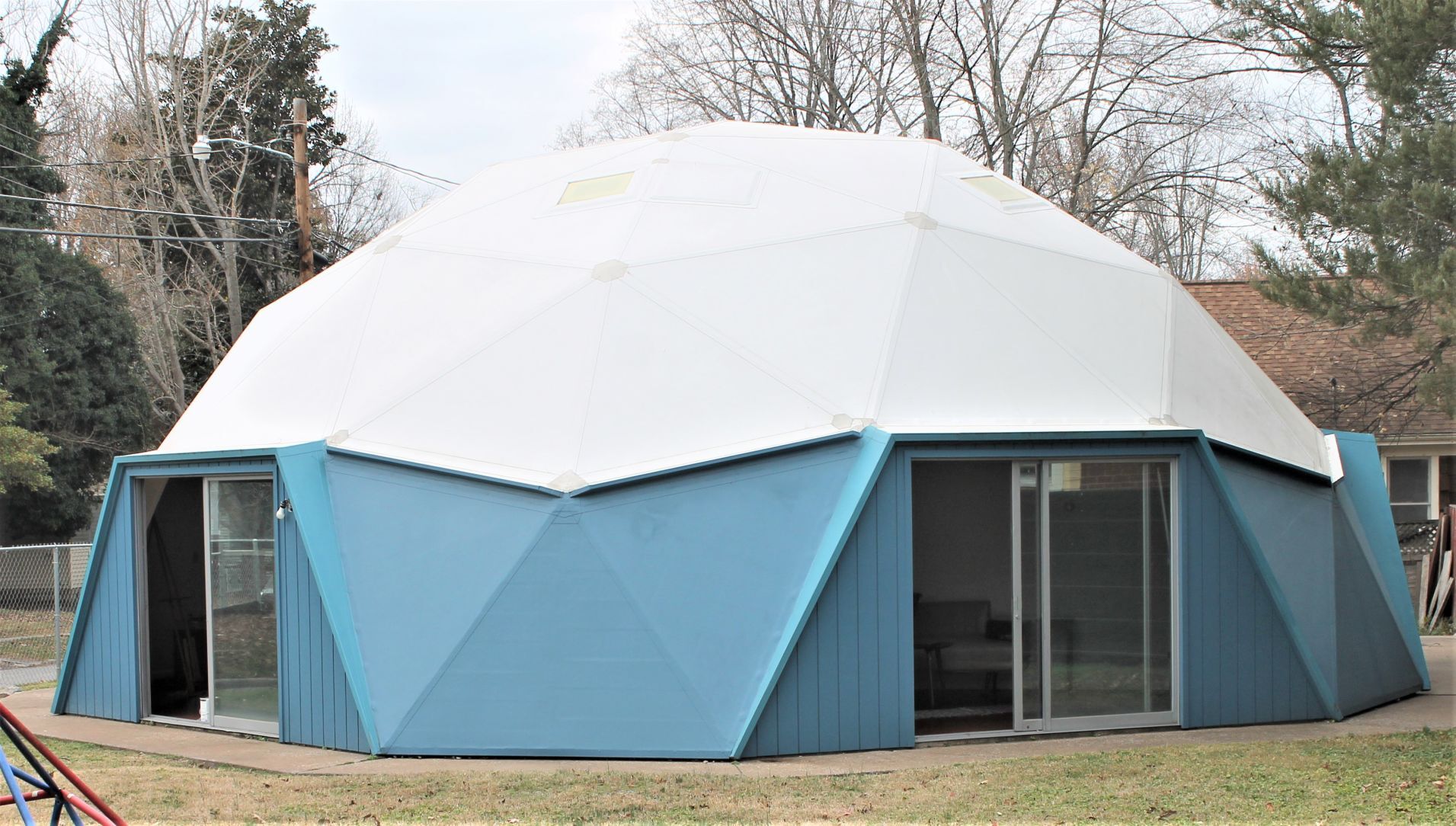 When R. Buckminster "Bucky" Fuller began teaching at Southern Illinois University of Carbondale (SIUC), he built a house for himself and his wife, Anne. As the inventor and patent holder for the geodesic dome, the design was only natural. 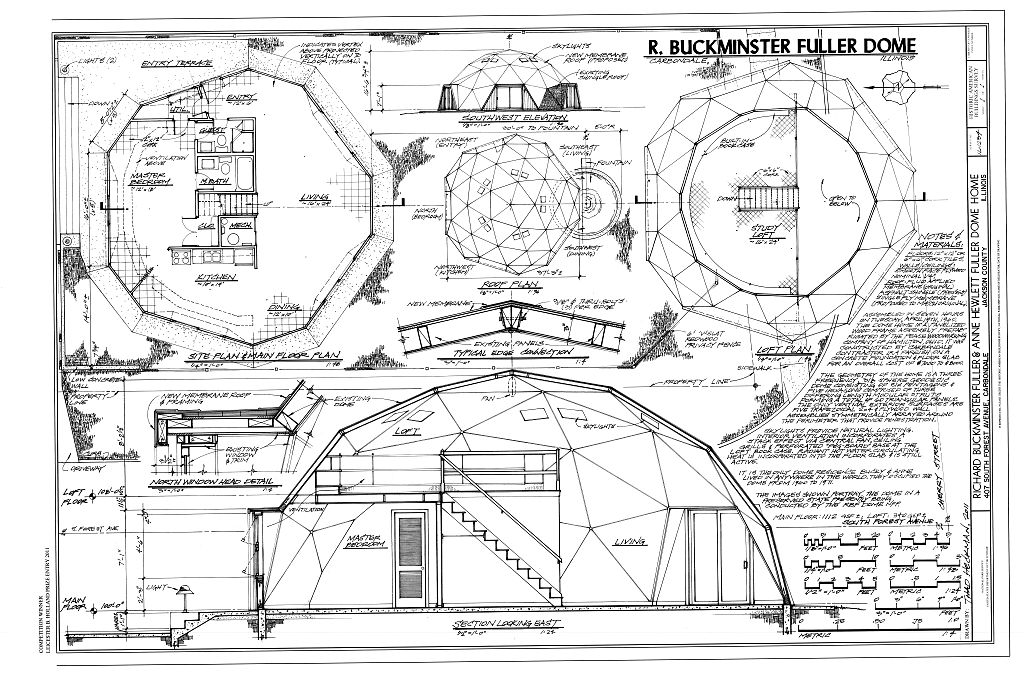 Built in 1960, Fuller would live here until 1971, and oddly was the only property he ever fully owned. So simple was the design, the house was constructed on site in a mere seven hours and ready for occupation. A sturdy structure it has survived to modern day, due in part to preservation efforts. In 2003, the home was recognized by the city of Carbondale as a historic landmark. In 2006, it was added to the National Register of Historic Places. The Futuro house was a product of post-war Finland, reflecting the period's faith in technology, the conquering of space, unprecedented economic growth, and an increase in leisure time. It was designed by Suuronen as a ski cabin that would be "quick to heat and easy to construct in rough terrain". The end result was a universally transportable home that had the ability to be mass replicated and situated in almost any environment.

The material chosen for the project—fiberglass-reinforced polyester plastic—was familiar to Suuronen and was previously used in the design of a large plastic dome for the roof of a grain silo in Seinäjoki. To facilitate transport, the house consisted of 16 elements that were bolted together to form the floor and the roof. The project could be constructed on-site, or dismantled and reassembled on-site in two days, or even airlifted in one piece by helicopter to the site. The only necessity on site for its placement were four concrete piers, so the project could occupy nearly any topography. Due to the integrated polyurethane insulation and electric heating system, the house could be heated to a comfortable temperature in only thirty minutes, from −29 to 16 °C (−20 to 60 °F).[1]

An excerpt from a February 1970 copy of Architecture d’aujourd’hui describes "Futuro" as:


the first model in a series of holiday homes to be licensed in 50 countries, already mass-produced in the United States, Australia and Belgium. The segments of the elliptic envelope are assembled on the site using a metal footing. Through its shape and materials used, the house can be erected in very cold mountains or even by the sea. The area is 50 sq m, the volume 140 cubic m, divided by adaptable partitions.

By the mid-1970s, the house was taken off the market. From the beginning, it had been met with public hostility. Its avant-garde appearance and unfamiliar material influenced the public’s reluctance to accept the Futuro House.[2]

The first Futuro House that was erected near Lake Puulavesi in Finland elicited public protest because it looked too unnatural for the rustic environment. In the United States, Futuro Houses were banned from many municipalities by zoning regulations. Banks were reluctant to finance them. Some were vandalised. Some customers who committed to buy them backed out and forfeited their non-refundable $1,000 deposits.[3] Some have been destroyed. In 1999, the city of Tampa ordered a Futuro House demolished.[4] Shortly after the turn of the century, a Futuro House was purchased on Broadkill Beach, Delaware, United States, and destroyed to make way for a double-wide modular home. Some have been vandalised in drive-by shootings.[3]

The oil crisis of 1973 led to an abrupt halt in plastic production. Synthetics became very expensive to produce. Additionally, the public was shifting their view of plastics from a miracle material to an ecological concern. These problems provide context to the discontinuation of the Futuro House. Fewer than 100 were made and it is estimated that today around 60 of the original Futuro Houses survive,[5] owned mostly by private individuals. The prototype (serial number 000) is in the collection of Museum Boijmans Van Beuningen in Rotterdam, The Netherlands. The Futuro no. 001, the only other Futuro currently in a public collection, is in the possession of the WeeGee Exhibition Centre in Espoo, Finland.[6]

There are approximately 63 confirmed Futuro Houses in existence across the world. They are in Australia, Denmark, Estonia, Finland, France, Germany, Greece, Japan, The Netherlands, New Zealand, Norway, Republic of Crimea, Russia, Sweden, South Africa, Taiwan, United Kingdom, and the United States of America.[7]
Click to expand...

The Climatron is cool but I... just love the Hall of Doom.

So that Hall of Futuro

Johnny Unusual said:
The Climatron is cool but I... just love the Hall of Doom.

Also, if that music doesn't get your blood pumping, one must be asleep or dead.

Maybe it’s a bit gauche to plug my own nom, but I just want to say that having visited the Climatron frequently as a kid it is in fact awesome.

Kirin said:
Maybe it’s a bit gauche to plug my own nom
Click to expand...

Nope. You do you.

Johnny Unusual said:
The Climatron is cool but I... just love the Hall of Doom.

The Justice Friends corner and ground the Legion's ship ending it's successful spree and sparing the Climatron! All eyes are on the future and Futuro!


THE FINAL BATTLE
Which dome will reign supreme!?
​
First one last look at at the brackets: 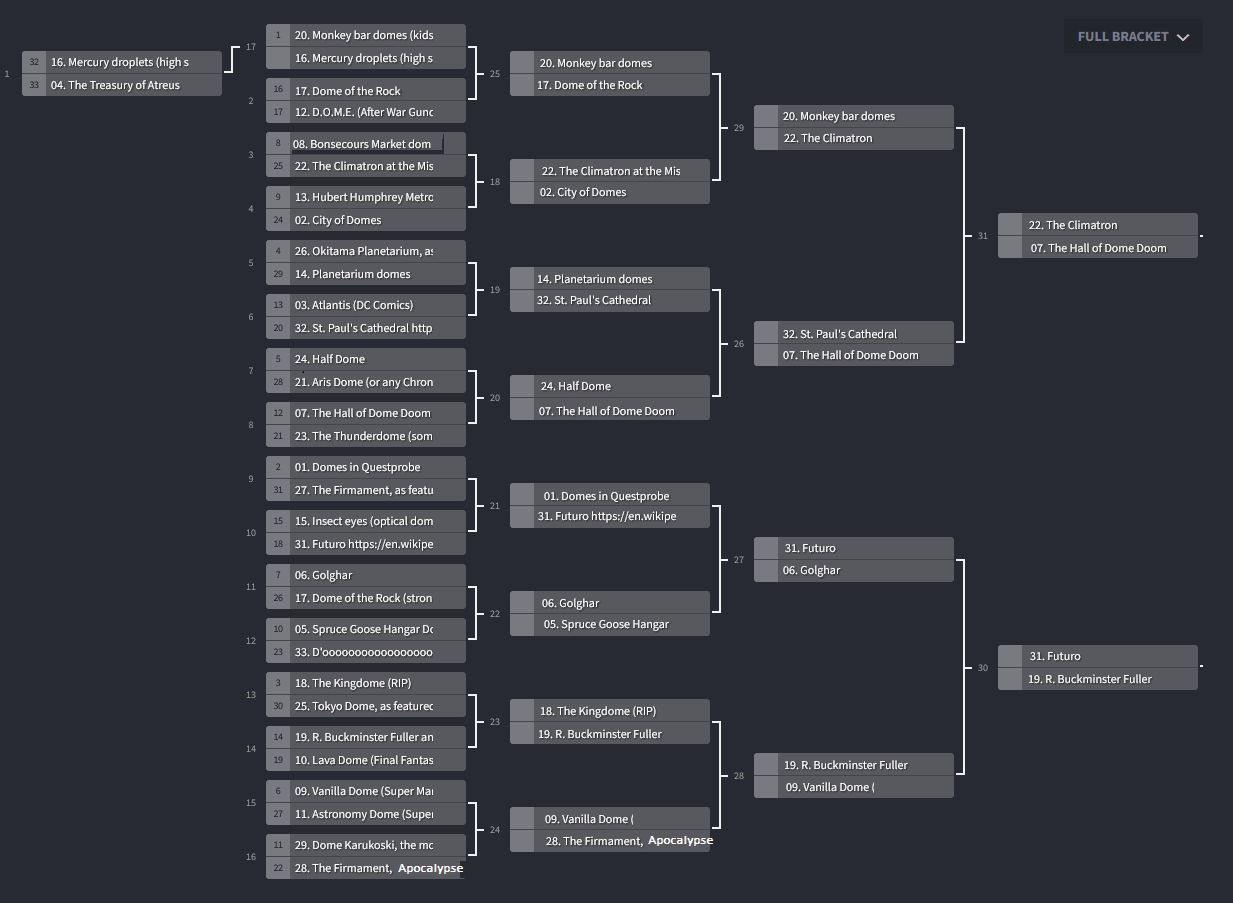 But past is prologue and all comes down to this. For one last time, let's meet our competitors as described by their sponsors

Via Kirin:
Daikaiju already gave you the Wikipedia summary of the Climatron's history, so I'm gonna go more on the personal side here, having grown up a short drive away from the thing. Greenhouses are always fun but this this is just massive for a greenhouse, at almost 140 feet across - so big it has stable micro-climates within it even though it has no walls. But I was too young to know much about that when I first went - what I remember is it takes the greenhouse experience from stepping into a tropical room up to stepping into a tropical world. You could spend an hour wandering around inside it if you try to look for everything. And let's not forget the spectacular view from the outside as well, with its enormous hexagonal exoskeleton creating a marriage of natural wonder with sci-fi construct. If it weren't for the Arch I'd call it easily the most striking building in the state.

Also it's name is just awesome. BOW BEFORE CLIMATRON. Via Olli:
Futuro is an experimental house made mostly out of plastic, designed by architect Matti Suuronen in 1968. The original design requirements were for a ski lodge; it was supposed to be fast to erect and heat up. The iconic shape was chosen, after a long design process, to suit the needs of the usage, the strengths of the materials chosen, and to be replicable on an industrial scale. It's possible to disassemble and reassemble a Futuro in only a few days.

Only about 100 Futuros have been constructed; you can experience one at the museum of modern art in Espoo.

i got a membership to mobot for christmas so it's absolutely a homer pick, but a deserving one 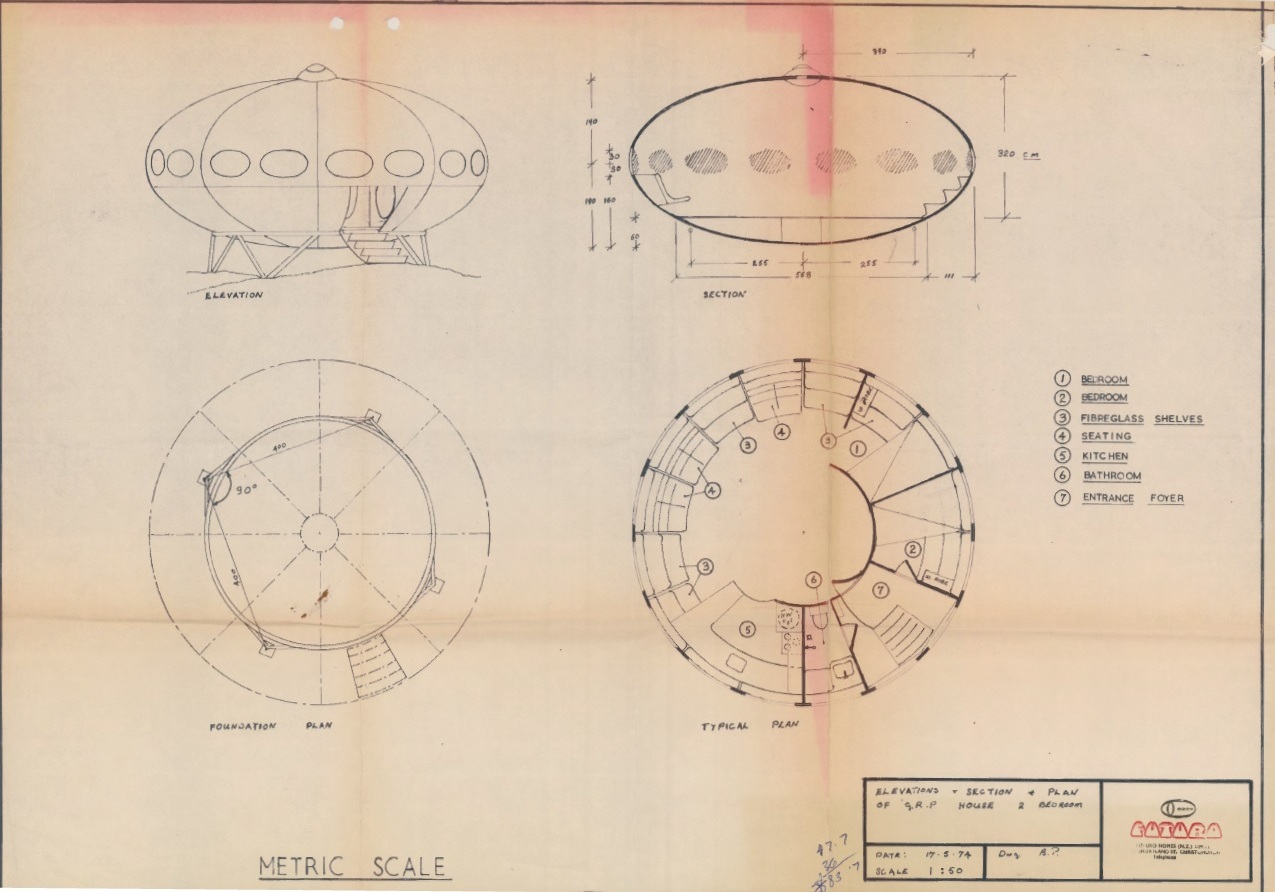 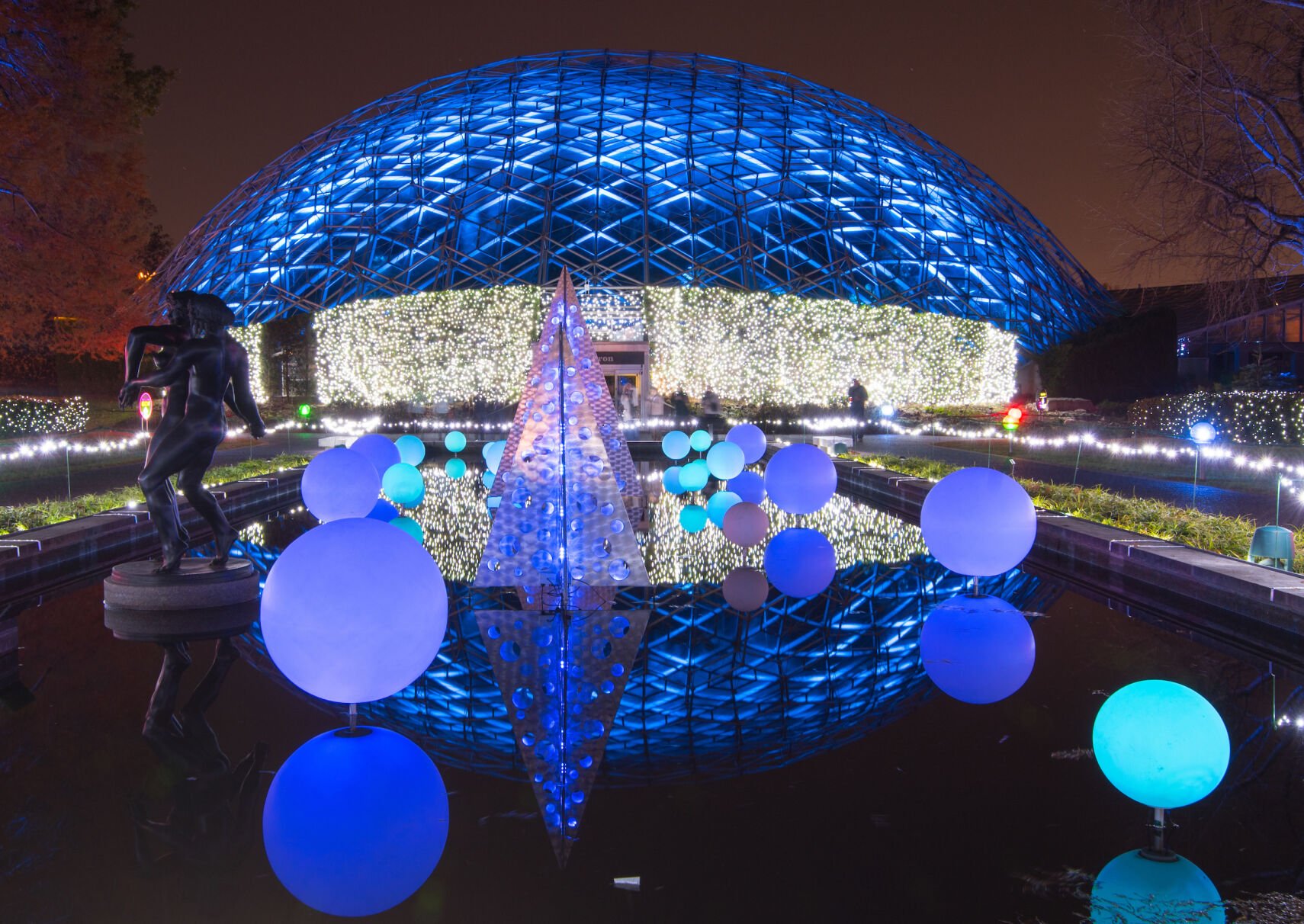 The Missouri Botanical Gardens Climatron​
The Climatron is a greenhouse environment showcasing the diversity of a rainforest ecology. A truly excellent Dome, a prime example of geodesic design, and our first Dome Thunderdome Champion.


Thank you all for indulging in this divergence from the usual musical throwdowns. I hope all enjoyed this-

MEANWHILE, AT THE HALL OF DOOM...

You will pay for this slight, Talking Time! Beware the Legion's wrath! DOOM COMES FOR YOU ALL!!


-nd that's my ironclad plan for the next Dome Thunderdome! Until then, thank you all for participating!

Thanks for the dome. It was fun and informative.

Yeah, this was fun! And I’m not just saying that because my nostalgic entry won, though that doesn’t hurt.

This was indeed a fun one!