I asked and you answered. Talking Time has opinions on paper products.

The thing is -- top 50 lists are a lot of work, pretty stressful, you know? And there's a lot on my plate right now. I just don't think I can take on this project. If only there were a way to lighten the load... 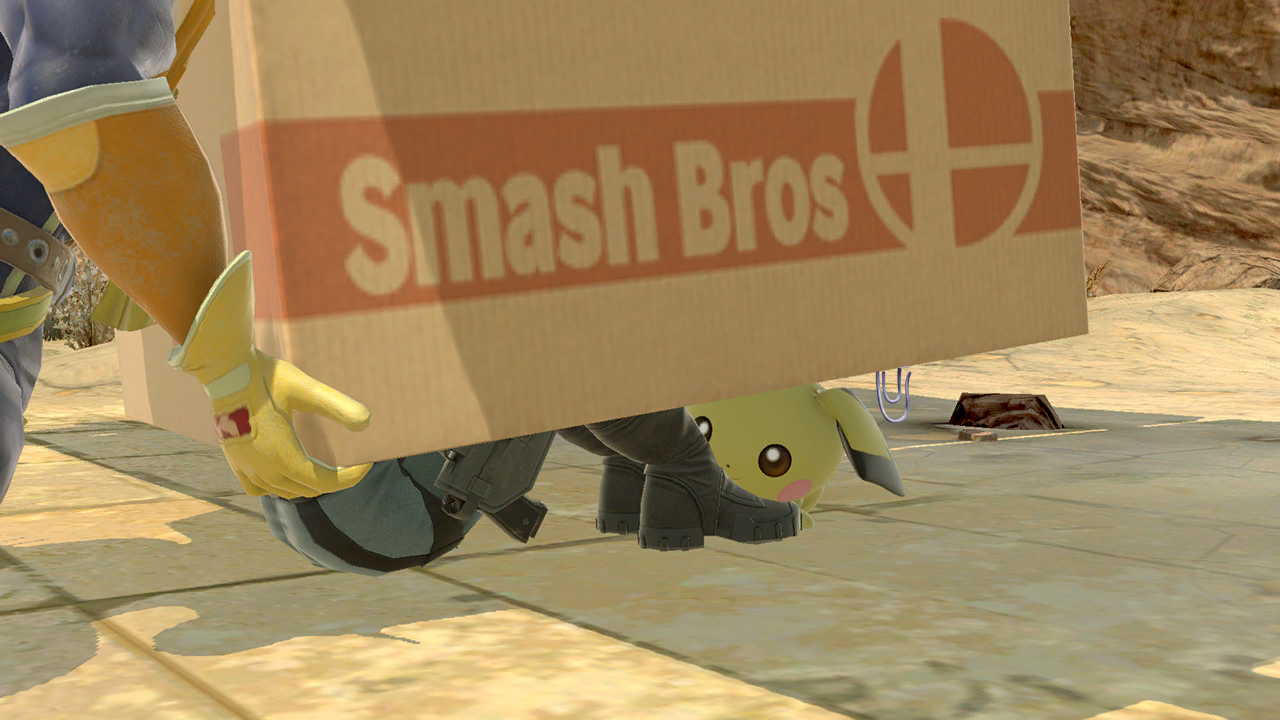 Score: 47 - Votes: 2 - Highest vote: 11th (Johnny Unusual)​
Who can say no to a good cardboard box? On another list, I think the humble box has a good chance at the highest echelons of greatness. In terms of office supplies, the box just scrapes by, tying for 50th place.


Bulgakov said:
Just a $1 cardboard box meant to hold a pendant necklace. I use it to hold my pen. I never lose my pen now.
Click to expand...

In terms of box hierarchy, cardboard wins for versatility. When not in use, a cardboard box can fold into a flat shape to easily store inside That One Closet. But they lose for visibility. Anything you put into a cardboard box is destined to become lost forever. Sure, you can write a summary on the side of the box, but what if you forget to do that the next time you inevitably shuffle around the contents? At some point you're going to have a box marked "vital medical supplies" which is full of half-disassembled Furbies, I tell you.

Box is good. Though I didn't put one on my list.


Dracula said:
In terms of box hierarchy, cardboard wins for versatility. When not in use, a cardboard box can fold into a flat shape to easily store inside That One Closet. But they lose for visibility. Anything you put into a cardboard box is destined to become lost forever. Sure, you can write a summary on the side of the box, but what if you forget to do that the next time you inevitably shuffle around the contents? At some point you're going to have a box marked "vital medical supplies" which is full of half-disassembled Furbies, I tell you.
Click to expand...

This is such a very specific experience that it is now cannon that Dracula has a mislabled box full of half-disassembled furbies.

Box is a good one I didn't think of. I don't have any on my desk (though there's a couple other small containers) but there's a *ton* around the room mostly holding all manner of hardware and electronics. (Plus most of the toy content of my childhood bedroom, which is currently stashed in a stack of boxes in one corner.)

Also I see we finally got enough lists in before the deadline to knock off any single-voter-number-one entries from squeaking into the top 50, so I guess I can spoil mine, which I was pretty dang sure nobody else would vote for (except apparently Mogri's brother who isn't voting) - the Desktop Milling Machine. Think of it as the opposite of a 3D printer, just much louder and can make things out of like metal and wood and such. Some might argue it's more of a machine shop supply, but it's on my office desk, so there. It's also the ultimate meta-supply. Missing some other supply? Make it yourself! I bet I could make a passable paperclip on this thing... or a box, for that matter.

Box is a good lead-off. I didn't think of it.

I won't spoil my #1 yet, as it's possible it got folded into a larger category.

Boxes are great until someone with less sense than brains decides to overload them, and then expects you to move them about for them.

I just want to apologize to Mogri for having to sift through the weird lab shit I put on my list. I tried to make a more generic list, but I consciously paid attention to what I was using over a week at work and uh, yeah I use a lot of specific stuff and can't really pretend otherwise.

No cardboard boxes at my workspace. All my pens, pencils, erasers etc live in my Grabdpa’s old handheld toolboxes.

Right off the bat something really obvious that I didn't think of at all! Boxes are fine items indeed, but to me they are mainly what office supplies arrive in. 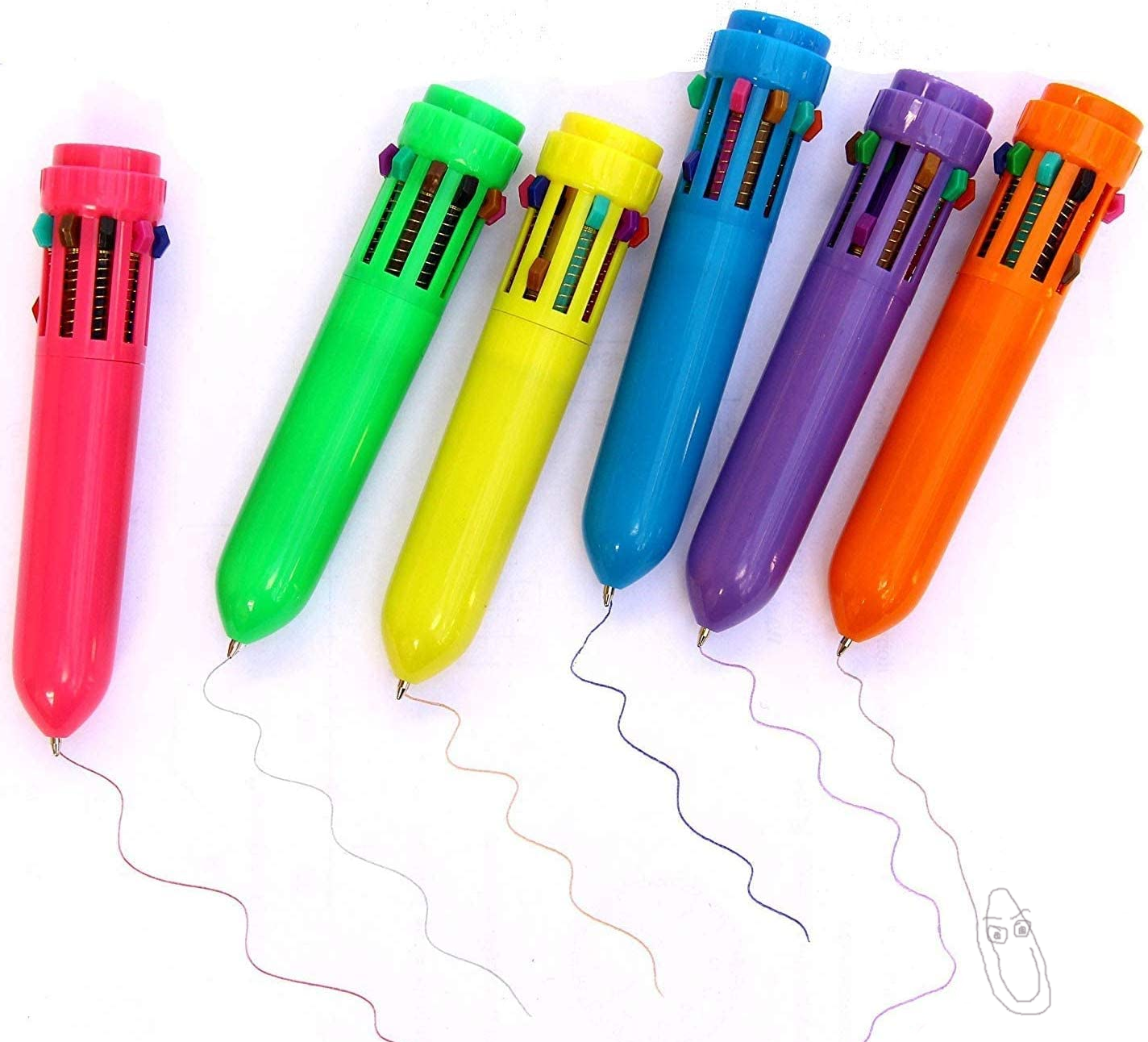 Score: 47 - Votes: 2 - Highest vote: 6th (Falselogic)​
Confession time! I would describe myself as an "office supplies enthusiast" or maybe "office supplies aficionado." I am not an authority on office supplies. I have worked with office supplies in a professional capacity, but only in the sense that most of you have done so as well. So a good portion of the work for this top 50 -- and coming up with my own list for it as well -- consisted of knowing what a product was, but not what it was called.

What I'm trying to say is: the official name for this thing is "shuttle pen." Who knew?


Dracula said:
The kind that have four nibs inside, and you push down the color you want? I love these.
Click to expand...

Falselogic said:
You know what I'm talking about. Those pens with red, blue, and black ink them. They have those fun sliding clickers. They're the best. You can find ones today with 4 inks AND pencil lead! I'm rocking the Pilot Dr. Grip 4+1!
Click to expand...

I have one of these on my desk that I use to write my daily checklists. I use the black ink for the list and the red ink to check the boxes. It's the best. The barrel has a crack in it, so the grip can no longer screw all the way in anymore, which means it'll soon be heading off to shuttle pen valhalla. I'll miss it.

I had one of these in primary school and thought it was a very neat toy, but I've never run into one in a professional context. I bet it's still a neat toy! However, I have to admit that I can't look at one and not think that its primary function should be to doodle the name of who you're crushing on in a notebook.
Last edited: Jun 9, 2021

Man, I haven't used one of those in years! They are cool and clever, but I'm not a huge fan of ball-points in general these days so I wouldn't have a lot of call for one.

My kids are big fans of the many many colour versions of these, but they have a tendency to jam/break, upsetting my kids and thus me. If I ever used any pen colour other than black at work I’d probably be keen on a four colour model.

JBear said:
its primary function should be to doodle the name of who you're crushing on in a notebook.
Click to expand...

But what else do you do at work?

If y'all have breaking pens its just cause they are cheap. Stop buying cheap pens! (jetpens.com is your friend) I use my shuttle pen together with my (redacted as it might show up later) all the time. Staples of my office life you might say!

is that an office supply or a child's toy

Those are neat but not one of my favorites. And I never knew that's what they were called until now.


Adrenaline said:
is that an office supply or a child's toy
Click to expand...

Why can't it be both?

But what if my employer is the one buying cheap pens?

Yeah, truth be told, I never purchase office supplies. I rely on whatever my company decides to stock its supply room with. If I buy stuff like this, I'm buying art supplies, which I guess do sometimes run together.

I always found most multipens to be more gimmicky than practical. Though I do still have that one from ThinkGeek's pre-GameStop days...

Has a laser pointer, black light, LED lamp on a flexible tether, and depending on which way you turn the point you get a pen or a stylus.

I, too, remember having one of these as a kid and thinking it was super great. I'm guessing it's called a shuttle pen because of the shape. But then why not just call it a rocket pen?

It's not the pen they think it is at home.

Probably, but can you make an Elton John reference out of that meaning? 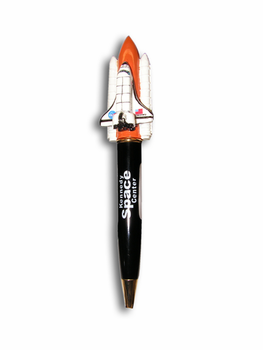 Astronauts used them or something

In all seriousness, I adore shuttle pens. I used to be absolutely in love with them as a kid and owned several. But it didn't take very long in the hands of a fidgety primary schooler to discover that the average shuttle pen was not designed to hold up to the rigors of being played with by children like toys, so I eventually stopped replacing my broken ones on account of functionality and also limited school supply budgets.
You must log in or register to reply here.
Share:
Facebook Twitter Reddit Pinterest Tumblr WhatsApp Email Share Link
Top