It’s a technical reason When my positive review of Mega Man 11 dropped, there were sighs of relief, gasps of disbelief,... 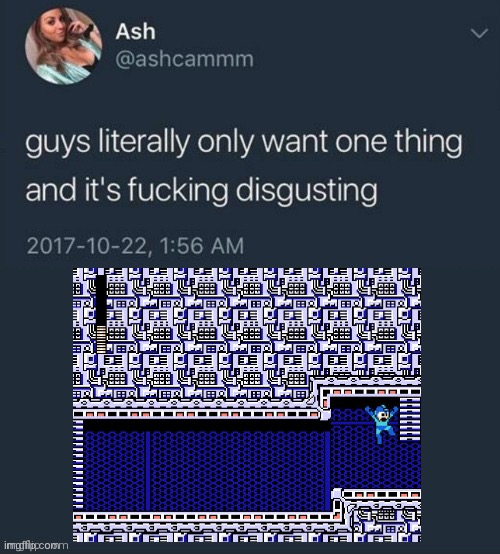 Let's say I want to maybe give MMX5-8 a fair shake. Is the PS2 MMX Collection an okay way to play MMX5 and 6? For some reason I never realized those entries were PS1 games, but my memories of playing MMX4 on that PS2 collection are that it was a fine port job for that game, unlike the SNES ports which weren't the best.

I guess a follow up question is: if I have original hardware available for the MMX games, is it worth getting the Legacy Collections on my Switch for any reason?

I’d say yes. They’ve got some QOL improvements that make some of the games much more palatable and Legacy Collection 2 has that series-wide boss rush thing that I didn’t actually play but looked pretty neat

I played the X games via the PS2 collection a couple years ago, and didn't have any issue with the ports. It does cut some voice clips from X6 for some reason, but the ports are otherwise complete and play fine.

The X Legacy Collections have some galleries and bonus boss rush modes, but I'm pretty sure the only change made to the games themselves is a "Rookie Mode" that halves damage and prevents spikes and pits from being instant kills. If none of that appeals to you, then you'll be fine with just the PS2 collection.

This is super neat. I expect there to be some graphic hacks for this in the future.

That file is huge. Is that really a Super NES game?

Yeah, there are two versions in there - one that just uses normal SNES hardware, and one that uses the remixed soundtrack from the PlayStation release via Near's MSU-1 expansion hardware. It even has a PSX-style opening Capcom splash video!

I don't think MiSTer supports MSU-1 yet, but bsnes and the FX Pak Pro/SD2SNES do.

(Oh, just in case you weren't aware, Sega CD-style shenanigans with this port of Road Blasters.)

Once in a blue moon, something comes along that defies all the rules — a technical feat that shouldn’t exist....

I was just thinking. You know how Mega Man has a "brother" of sorts in Proto Man, who appears every now and then to keep the player guessing about his allegiance and his motives? Proto Man is evidently an early design of the android Mega Man would become... a prototype, as the name suggests. The funny thing is, he seems to be the more advanced model, sleeker, smarter, and more confident than his brother. You would think that if he was the prototype and Mega Man was the finished model, Proto Man would be glitchy, flawed, and wholly inadequate as a combat droid. He'd play his flute off key every time he appears, have big Coke bottle glasses to correct his faulty vision, and trip over his own boots every three steps.

He does have a faulty power core that is likely to kill him any moment now (said moment never seems to come, but it’s a thing), so presumably they cut back on a lot of the bells and whistles in order to keep Mega Man not constantly on the brink of death

Staff member
Moderator
Protoman is a prototype in that he can only equip a shield but Mega Man can access all flavors of the rainbow.

Protoman can emote and use contractions.

Octopus Prime said:
He does have a faulty power core that is likely to kill him any moment now (said moment never seems to come, but it’s a thing), so presumably they cut back on a lot of the bells and whistles in order to keep Mega Man not constantly on the brink of death
Click to expand...

This. Plus he's a bit of a glass cannon, as I recall.

I always assumed that was part of the faulty power core thing;

ArugulaZ said:
The funny thing is, he seems to be the more advanced model, sleeker, smarter, and more confident than his brother. You would think that if he was the prototype and Mega Man was the finished model,
Click to expand...

That’s the thing with consumer electronics these days - they just keep removing features to keep you hooked. Wait for the X Model, it adds back many of those features but at a premium price (and some of those features might be available as add-ons only).
Last edited: May 8, 2022

This is worth sharing, I think. Mega Man: The Sequel Wars already looks like the developers put twice as much effort into it as Minakuchi did with Wily Wars, and they're nowhere near finished. This is a battle with the Doc Robot, the android that can assume the attack patterns and weapons of past Mega Man robots. However, UNLIKE Doc Robot from Mega Man 3, he's actually there for a reason beyond stretching out the game's length. It's not enough that he attacks with a weapon from one Robot Master, oh no... he fires projectiles from several of the Robot Masters from the first Mega Man trilogy, often all at once. It's extremely impressive (at least by early Mega Man standards) and turns a character which I always regarded as tedious and contrived into an enemy worth challenging.

It's worth noting, for those not in the know, that this is footage of The Sequel Wars "EX Mode". The project also has a standard mode that is a series of more literal remakes of MM4-6.

That looks far too difficult to be fun

It looks super technically impressive but yeah, tuned a bit high for what I'm looking for in a Megas Man.

Still looking forward to this for the 4-6 remakes.

Wow, that is the one robot master I always wanted. That's great.

This game is the best kind of fangasm.

Lokii said:
Looks super cool. Really thought out pattern design here with plenty of siginaling and opertunities to react. That second phase is really neat too.
Click to expand...

Yeah, this is what keeps it from looking too difficult to me.

I just played Mega Man 11 this year. Its really good. I liked the gear system.

MM11 has one of my favorite robot bosses: Tundra Man.

The ability to save between levels in Wily's Castle means you don't have to do it in one sitting. A serious improvement for the series.

Its been a while since I've played some of the MM games. But I would rank MM11 really high. Right below MM2, MM3 and MMX. Its different than MM9, but I would put it on par with MM9 for enjoyment.

The only major downside of the game for me is the music doesn't, IMO, measure up to the classic MM sound tracks.

I didn't like 11 very much at all. I think I enjoyed Mighty No 9 more, actually. And yeah, the soundtrack was pretty mediocre. I think it's mostly held back by the arrangement, though... the 'instrumental' versions of the tracks are pretty good, and there are plenty of 'NES-style' arrangements out there that sound great.
Last edited: May 22, 2022


MM11's "Normal" ("Original Spec") mode is much like MM2's "Difficult" mode in that, yes, it's technically what the game was designed around, but it's slightly too overtuned for a first playthrough. Casual/Advanced mode is a much more reasonable difficulty for MM fans playing the game for the first time (given stuff like stage length, checkpointing, etc.).

Expert/Superhero mode should not be touched. It's just masochism of the uninteresting variety (compared to MM10's excellent hard mode).

I put MM11 aside when it first came out after trying it on Normal mode and basically running into a brick wall with the Wily stages. Went back to it later on Casual and it was a far better experience.

Yeah, I think I knocked it down a level from "normal" when I played it.

Whoever grades MM difficulties needs a new job. MMZX Advent vs. ZX was out of whack, too.
P