Last year for Halloween season I played the first Shivers game for Talking Time 2.0. Shivers was a very nostalgic game from my youth, a game my cousins owned that I played a lot in the late 90s. The odd thing is that Shivers wasn't the game that we had at my house, that honor went to the second game: Shivers 2: Harvest of Souls. Despite this, I didn't play the second game at all, my mother played it a bit, but she told me how it wasn't a direct sequel and didn't follow the story or setting of the first game, so I didn't play it. 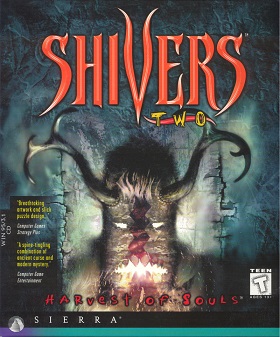 Despite this, there's a few things that make the second game stand out. The first game had static screens you traveled through, but the sequel has more 3d set pieces that you can rotate and look around, giving the scenes more variety and helping them stand out. Instead of the lone Museum setting of the first game, the sequel is set in the town of Cyclone, Arizona, "the West's most secluded town". You're friends with the band Trip Cyclone, and when you come to the city, they're missing, and your only clue is a note that reads "I have your friends. Only the warrior can free them."

With a southwest setting, indian burial grounds, and a group of missing friends (including YouTuber MetalJesus. No, really!) can we figure out the mysteries of Cyclone? Will we have to become the warrior? Can we find the bahos?

So the town of Cyclone is certainly isolated, you quickly get clues that it's located in the middle of a canyon, and a recent rockslide has blocked the only path into town. (Apparently the player still dragged their dirt bike over the slide). The band Trip Cyclone has been staying with Pearl, owner of the local diner, for some time. At some point before our arrival, they've had issues with their van, and now they're all missing. It seems like the local innkeep isn't a fan of theirs... or ours!

Not long into our starting exploration, we start getting visions of a ghostly woman, and a menacing message from Darkcloud.

#1: A Cold Reception
Wherein Red meets a jerk, eavesdrops on the phones, and thinks the birds are creepy.