"It feels different this time..." - The new Doctor Who Thread

I'd love the Weeping Angels (and the Silence) to fulfil their potential and become regular enemies. Their core gimmick is just so solid.

I'm prepared to call that the best episode of the Chibnall era, the Division nonsense notwithstanding.

That was so good

Vaeran said:
I'm prepared to call that the best episode of the Chibnall era, the Division nonsense notwithstanding.
Click to expand...

Over the past week, I've seen both Rosa and Demons of the Punjab, and I prefer those to this one by quite a ways. Still, yesterday's episode was quite good.

I'll have to rewatch those at some point, then. I remember them being highlights when they first came out, but it's been a while.

I liked the episode so much I watched a sort of making of thing the Doctor Who twitter account just tweeted out. Massive spoilers for this week's episode, obviously, as a good amount of this making of focuses on the (excellent) cliffhanger:

Been waiting for this one for a while, I really like this serial...

New Years Special confirmed, apparently. Not that anyone is surprised, I'd imagine.

I really hope RTD returns us to the tradition of DW Christmas specials. He's got to, right?

I hope so, and I hope he returns the show to Saturday nights. Sunday sucks

Now I'm wondering if the current short serial is just going to cliff-hanger into the new year's special, what with the Tardis being increasingly wonky with its doors in wrong places and such and then the promo image of it cracking there.

Or actually, maybe more likely, the Tardis being wonky is the *one* of the zillion threads started at the beginning of this run that *doesn't* tie back in to the overall current Flux/Swarm/Division plot, it's just happening in the background as a tease that will lead in to the NY episode.


(Meanwhile I enjoyed all the Xmas specials but I have to admit there's certain advantages in new years' being non-denominational.)

Kazin said:
I hope so, and I hope he returns the show to Saturday nights. Sunday sucks
Click to expand...

As long as I'm making an RTD wishlist, I want him to bring UNIT back as well. Chibnall just binning UNIT and Torchwood with a single throwaway line of dialogue made me very sad! Well, Torchwood less so, but... Kate Stewart and Osgood are fun characters, and in general I just like the idea that there are organizations out there dealing with alien shit separately from whatever the Doctor happens to be doing that week. To me it makes the world feel bigger and adds a lot of possibilities for storytelling.

Chibnall just binned a load of cool stuff with throwaway lines, it was a thing. He could have, you know, just not used them if he didn't like them.

"Next time" trailer spoilers: Kate Stewart is in the next episode, apparently. No idea if it's as a member of UNIT, or if she's doing something else, or what. But, she is coming back.

Kazin said:
"Next time" trailer spoilers: Kate Stewart is in the next episode, apparently. No idea if it's as a member of UNIT, or if she's doing something else, or what. But, she is coming back.
Click to expand...

The Beeb have shared a photo with her in front of a UNIT sign, so it's a good chance they're back

Phantoon said:
The Beeb have shared a photo with her in front of a UNIT sign, so it's a good chance they're back
Click to expand...

That's the one I saw!

I knew it was too good to last.

Having now actually seen the episode, I can confirm that was a load of horseshit.


Very good that last week's amazing cliffhanger amounted to literally nothing. I bet Maxine Alderton feels real good about that.

I tried to pay attention for most of this episode, but around the three hour mark I started focusing more and more on my phone until I was only really half-listening to DW. I briefly stirred from my torpor for the UNIT stuff, but even that got really silly.

KATE STEWART: I don't know how you've been killing people. But I've definitely somehow developed a countermeasure to it that will keep me completely safe while I deliver this speech.
PRENTIS: Hmm. Damn!

Well. It was nice to see her again, anyway. I need to check out some of the Big Finish UNIT dramas she's in.

At first I thought that Yaz, Dan and Jericho, marooned in the early 20th century, were searching for a time and a place where the Doctor is known to have appeared so they could hitch a ride with her back to present day. That'd be fun. Instead they're looking for a clay pot that knows the future...? The Flux doesn't travel through time, does it? It was an event that happened on or around October 31, 2021. The Doctor theorizes that refugees from the rest of the universe will then flock to Earth for sanctuary, but she somehow has no idea when that will happen. How about... right after the Flux occurs? Everyone's acting like this is some mysterious event that might take place at any time across history. "December 5, but we don't know what year!!" Christ.

I just remembered the incredibly tiresome mystic they go to see. Fuck.

Also, maybe this was a result of me not paying close attention, but did the paint the gang applied to the Great Wall in 1904 last through exposure to the elements until 2021 so Karvanista (who says he doesn't have access to time travel and therefore must still be in 2021) could see it? That's some high quality stuff.

You know how Colin Baker's Doctor is always the Doctor they put through a trial whenever they write some Big Finish/novel/comic about the sixth Doctor? I think Whittaker's Doctor will have something similar happen to her, though instead of a trial, she'll just have super boring dialogue explained to her while she just stands there. It happens over and over again to her throughout her era. Until this season, 13 would have been the "Mansplain Doctor," but at least Tecteun* makes it so women explain boring plot details at length to her as well! Progress?

*I had to look up the spelling lol

It wasn't boring, at least, but it wasn't very satisfying, either. Why was the TARDIS like, bleeding black stuff during the first few episodes? Why was one of the Swarm seemingly living life as a human, not wanting to "answer the call" or the alarm or whatever it was in the first episode? Why does the Doctor get the fob watch with her memories in it, and decide to lock it away in the TARDIS after spending nearly two seasons trying to figure out her memories? Why does Time let her go? Why does the Doctor seem bewildered that someone called "The Master" will be in her future?

Also how am I supposed to warm up to Dan, given he hasn't gotten much to do, and seems to have stopped the Doctor and Yaz kissing?

I guess I'll be rewatching all of these episodes this coming week, since I'll be finished with my chronological watch through of DW a week from today, so maybe I missed something (it's Chibnall, so I probably didn't).

EDIT, hours later, because I forgot she was in it: What was the point of Kate Stewart and the whole UNIT subplot? wtf

Jodie Whittaker was great in this one, though.
Last edited: Dec 5, 2021

Christ, I literally forgot this was out today, so unimpressed was I with last week's. Uggghhh I'm gonna have to watch it tomorrow and I don't wannnaaaaaa

I liked the finale and the episode with the weeping Angels. So a third of the Flux episodes I enjoyed.

Having characters phase in and out of their usual timeline established the effects of the Flux but also makes the episodes hard to follow and feel un focused.

That said I will miss Jodie Whittaker as the Doctor.

Vaeran said:
Christ, I literally forgot this was out today, so unimpressed was I with last week's. Uggghhh I'm gonna have to watch it tomorrow and I don't wannnaaaaaa
Click to expand...

It's at least better than last week's episode, which was definitely the nadir of the series, fwiw.

This was exhausting to watch.


Kazin said:
I guess I'll be rewatching all of these episodes this coming week, since I'll be finished with my chronological watch through of DW a week from today, so maybe I missed something (it's Chibnall, so I probably didn't).
Click to expand...

Well, it's my own fault haha. It'll at least be better than series 12, which having just watched it, is the worst series of Doctor Who since it came back in 2005. I can't believe I recommended it over series 11 in this thread, I'm sorry to anyone who watched it because of me. Series 11 ain't great but it's miles better than 12, which is just an absolute slog of mediocrity. Even the non-Chibnall episodes in series 12 are bad.

Spoilers for the entirety of series 13 (hell, the whole Whittaker era, so far) - here is a video where Chris Chibnall and Jodie Whittaker explain bits of Flux that aren't 100% stated on screen:


So it turns out that yes, that woman living in the Arctic Circle in episode one that is "rescued" by Swarm was there as punishment, which is why she thanks him when he kills her husband (jailer?) and releases her. Why she gets that punishment instead of being stuck in an electric box like Swarm got for eternity isn't stated. And the Doctor doesn't open the fob watch because I guess she feels that now, she doesn't need to, that she's satisfied with her identity as is? I'm not sure where/when this character development happened, but it felt sudden on first viewing and the description by Chibnall of what he was going for here doesn't help. She just... decided. Neat. 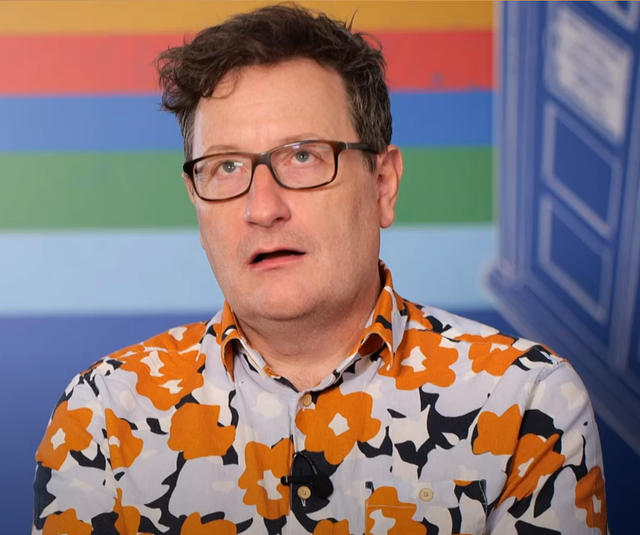