So more drama on Draenor when parts of the Horde of Draenor want to follow in the pure conquest goal that the Old Horde had in mind. While the Orc Horde had done well during the First War and put up a good fight during the Second War, Ner'zhul's goal isn't one of pure conquest. Those that will not follow his design must be dealt with.

I mentioned that the role we play in this expansion is the Slayer of the Shadowmoon Clan. As it happens, in WarCraft: Orcs & Humans, Slayer was one of the end-of-stage ranks you could receive, and wasn't far below Warchief in that game.

It's worth noting that the AIs in the expansion are more likely to start with a less developed base but build up what they need. You don't see it as much in normal play because with fog and with the obscured map you don't typically see the computer's bases at the start of the game.

Once our enemies in the Thunderlord and Bonechewer clans are dealt with, will the knowledge from the fallen Ogre Mogor and the Skull of Gul'dan be enough to reopen the rift to Azeroth?

#2: Chop chop
Wherein Red gets to play Tower defense, takes out Bloodlust on farms, and watches Peons run through his base. 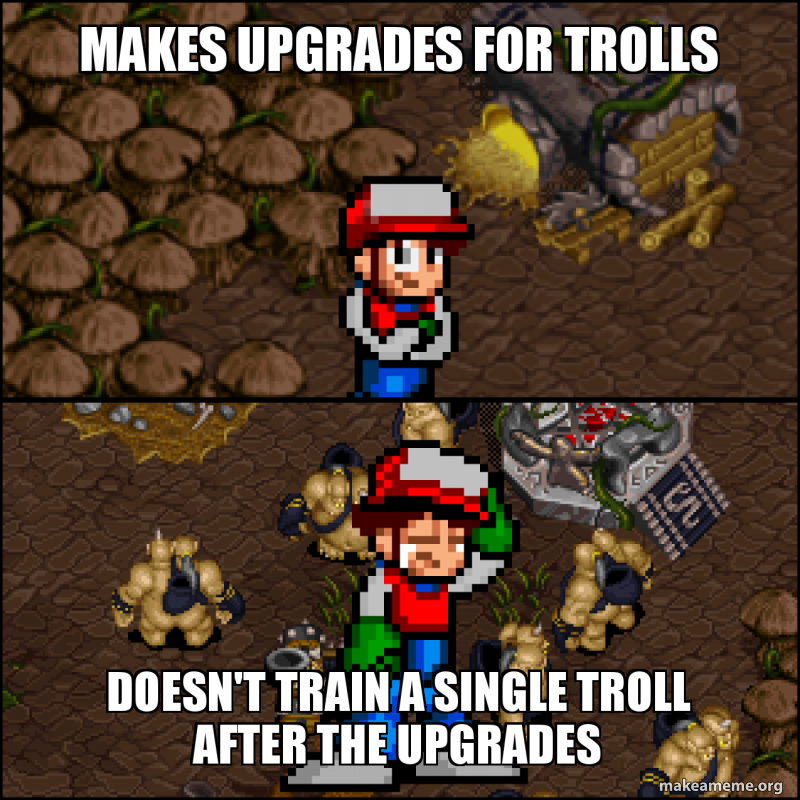 The Horde of Draenor has found its way back to Azeroth, but during the time between the fall of the Dark Portal and now, a new human settlement, the Citadel of Nethergarde has been raised near the portal. Some of the defenses at Nethergarde are caught by surprise, but not all. Can we use this to make a foothold into Azeroth?

This level is a doozy, and ultimately I had to change my method of playing, as I had no less than 30 failed attempts. We start with three Human CPUs, a teal, purple, and blue. The blue Human AI may be one of the more aggressive I've seen so far, so while building up a base they will constantly harass us, upgrading their entire tech tree (minus Gryphons, I believe) and even building strong defenses as they expand their base. Teal and Purple, by contrast, start with hardly anything! At the start of the stage neither of them have a Barracks or Lumber Mill, mostly just a Town Hall and Farms, though Teal has some standing army and Towers. It's clear that they intend you to take Teal first, and Purple is delayed so they aren't a hassle too early.

So, what differing style did I go with to handle these three threats? It still took a couple tries to get the push I wanted, and I think the big thing this time was making better use of our Death Knight hero, Teron Gorefiend.

#3: I'd be delighted
Wherein Red bum rushes two bases, plays the level thirty times, and wonders where the Heroes went.

So in lore, the Dragons we had during Tides of Darkness were Red Dragons. The Orcs captured Alexstrasza, the head of the Red Dragonflight, and forced her children into slavery. The novel Day of the Dragon details how Alexstrasza was saved. But for our Horde of Draenor, this means that they need a new source of Dragons...

Of course, now we get to deal with Gryphons again too...

This is another level that took a few attempts, but the most disheartening was an attempt that I failed during the literal last seconds of the stage. Not just a failure to win, but a straight up, legit Defeat, because one Ogre didn't travel far enough before dying.