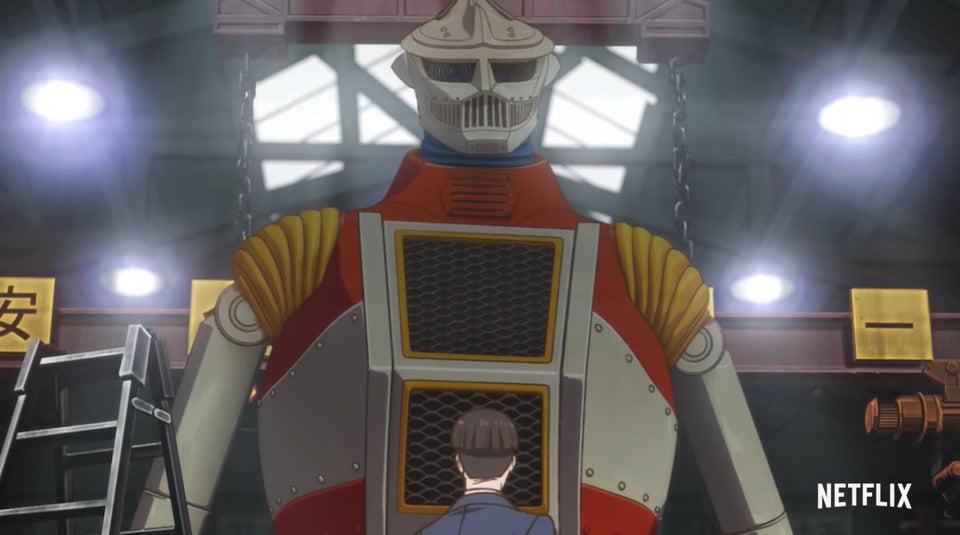 On the one hand, Netflix has burned me with promises of Godzilla before.

On the other hand... I... am looking at Jet Jaguar

The second film had "Mechagodzilla City" and essentially ran with the premise... far away from all of the promise of having a Mechagodzilla city.

God, those animated movies were so bad. I'm getting a little angry just thinking about them.

Apparently the tagline for the show is "Face down a hopeless future".

also I watched Godzilla vs. Biollante a few weeks ago and thought it was okay, I guess.

also should I watch the Roland Emmerich Godzilla y/n

Yes. Go in with low expectations and just enjoy it as a side project.

I enjoyed it! (generally like Godzillas; did not enjoy the two most recent American films)(barely remember but I think I, um, liked the dreadful by reputation Netflix films, even)

Yes, and then pivot to the (substantially better) cartoon tie-in to that movie

Tegan said:
I always want to like Godzilla, but I have a tough time actually enjoying any of his movies outside of the original, Shin Godzilla, and the 2014 American one. I don't even like the sequel to the 2014 American one. Dunno what it is where I love Godzilla in theory but find him dull in practice, but I wish I knew what my personal hypothetical perfect Godzilla is.
Click to expand...

Godzilla (1998) is not good. The How Did This Get Made episode is pretty good, though.

The main writer for the Godzilla: Singular Point writes really cool experimental/conceptual sci-fi novels. (I don't know which ones are translated other than Self-Reference Engine, or if the translations are any good.) I wonder if they're going to him for something in his own style, or if he's just there to churn out some genre work for a job.

Okay yeah so one of Toh EnJoh's formal experiments in his novels and short stories is to use programming languages as part of the writing process to create odd computer generated texts or as metacomentary on the nature of writing, and it looks like at least to some degree he was able to do that with this upcoming Godzilla project:

It's possible it will be some minor throwaway element in the background for a few seconds and he's just getting his authorial signature somewhere in Singular Point. It could also mean . . . things are going to get weird and metatextual and/or computer generated.

My guess is that it's the former because it's a Netflix Godzilla movie. But maybe something interesting could happen.

I'm not seeing anything. Should I see something?

Watching this stuff a bit.

I had a period as a little kid when I was really into Godzilla. Loved Mothra a lot, and both 1974's vs. Mechagodzilla and 1993's vs. Mechagodzilla II were in constant regular rotation. Back then I had no conception of things like "media having been created at different points in time" so I didn't understand the two movies were separated by two decades--I just thought they looked and felt different for some unknowable reason. I think even then, my preference was for the rickety, riveted Mechagodzilla of the '70s, and I ate up King Caesar too. Some weird stuff sticks with me even now from the second movie, like Godzilla having a second brain in its thigh. More assorted memoirs from that time: I'm pretty sure I cried when I missed an airing of vs. Destoroyah and couldn't tape it. Still haven't seen it. Those childhood affections mostly died along with the premier of the 1998 American production. Even then, it soured me on a lot of what I imprinted on, and I mostly didn't look back.

Last night I finally stumbled onto the chance to watch Shin Godzilla, which I'd been occasionally angling for ever since it came out. Well worth the wait, with dry and wry rapidfire human performances and patter, contrasted with the low-fi documentary-style horror framing of the creature that roots the perspective in a mundanity that only highlights the absolute wrongness of what's happening in these locations doused in normality. The most emotionally harrowing shots of Godzilla are the ones that present it with total clarity, rejecting the comforting vagueries of shakycam found footage conventions that an on-the-street account like this could depend on--instead the monster has to be faced head-on, in discomforting proximity. Not sure about the technical aspects of the production, but I assume the creature effects are mostly CG visuals, but combined with the uncanny design elements of the various G-forms--all craggy, unclean, unsymmetrical, at war with their own bodies--it does not evoke anything so much as the aesthetic of puppetry and even a little stop-motion, in all the weird jittery wriggliness. Even if you removed this Godzilla from the thematics inherent to the character and concept, it would remain a visual existence difficult to simply witness come alive on screen, and how's that for a creature feature with staying power.

Bolstered by that, I started dipping into the other series films that I know little about and so pick and choose with exacting criteria like "what monster seems neat." Based on that reasoning, vs. Hedorah, or vs. the Smog Monster was first. It's not a totally unknown space to me but it's still funny to witness Godzilla in its Defender of the Earth mode, coming off the allegorical horror and symbol of humankind's folly treatment elsewhere. I don't think they're incompatible framings at all--humans are mostly just projecting their own alternating priorities and biases onto something they can't truly comprehend or affect--just an interesting side effect of a massively longlasting franchise shifting its goals and aims as needed over time. What really rules about this movie is the arresting visuality of the scenes of pollution captured in it, in context of Hedorah and outside of its influence; grime and sludge aplenty for connoisseurs of filth. It's also a ton of fun aesthetically in general, as a comedown of the nascent counterculture with its effects still in full force here, as people gyrate through the plot that at one time breaks into musical numbers like the excellent title sequence and later escapist bonfire party, or just provides wildly colourful intermissions through cel animation or whatever other visual tool they want to explore. I can't really say enough good things about Hedorah as a monster design either--eyes that are always lidded meanly, with an unclear silhouette even in its most bipedal form, tossing and sloshing muck and mud everywhere it goes. The inexplicability of it places it in a similar realm of monstrum as figures of modern folklore like the indefatigable Flatwoods Monster. Love it to bits and pieces. I think this a movie that manages to balance camp goofs and disturbing imagery with a rather deft hand, and achieves a social texture in the concepts that you'd always hope are accounted for in works like this and with this pedigree.

Jumping back a few years, I also watched Mothra vs. Godzilla. Can't contract the title here because Mothra has top billing, as well she should, and it's a fact that also communicates clearly where the oppositional morality here lies as Godzilla is portrayed as a malicious presence, from beginning to end. The depiction of Godzilla is interesting in this movie because as it enters the picture, abruptly and a little jarringly in the narrative, there's a sort of comical slapstick that's perceptible at least to my eyes and interpretation, as Godzilla's tail gets stuck on architecture, or its tottering feet stumble and its great frame comes tumbling down and through picturesque castles which enrage its stride further. Villainous and dangerous, yes, but with a lighter, more comical touch, I think. The battles against Mothra underline that approach, just because of the incompatible physicality between a person in a suit and a huge rigged model clashing against one another: Mothra's offense is largely long-ranged and its effects render Godzilla a flailing, pratfalling mess any time it's subjected to the winds, pollen and webs unleashed by its insectoid tormentor in a way that's really fun to watch as Haruo Nakajima overemotes exactly as you'd hope for someone wearing their own weight in suffocating latex rubber, portraying an undying dinosaur god. It's so much a one-sided humbling here that it's really elating to see if you're invested on any level in kaiju cockfighting and picking the faces from the heels and rooting accordingly. I think it's also an entertaining film on the human side as the long while of it starting off involves a journalistic public relations conflict regarding the ownership and commercial exploitation of Mothra's egg, in a sequence of events that's played straight and is made all the funnier for it ("Are you saying Mothra gave you power of attorney?"). The heroes are upstanding and fortright; the villains are sniveling, over-the-top and pathetic. It's good stuff.

I might watch more, I dunno, but it's been nice to return to something I liked when I was very young and find something old and something new in everything that it is.

So Godzilla vs. Kong got moved ahead from May to March. Does this movie even have a trailer yet?

I really hope it's more in the spirit of the truly excellent Kong: Skull Island than Godzilla: King of the Monsters but I'm excited either way.

Either way, we’re in for a rip-roaring’ good time.

HBO dropped the first footage from the movie in this ad for all their upcoming movie releases on HBOMAX.

There's only a few seconds there though

Is tiny but gud

I’m guessing the Monsterverse is dead after this? KotM underperformed and now WB’s COVID punt is sending this one out to die.

It was always set to end at this point, Legendary only had the rights to use the characters for a couple of years; probably better that they focused on making a very small selection of movies with (hopefully) more hits than misses than trying to drag this out into an MCU endeavor.

I mean, I'm a little disappointed we are not going to get MechaGodzilla, but otherwise I think I've gotten pretty much everything I wanted to see.