It's so dumb that these keep happening. But I don't expect them to stop anytime soon, so I am making a thread for anyone who also wants to stare mouth agape at the fallout from yet another gender reveal catastrophe.

I didn't know what "tannerite" was, so I looked it up on Wikipedia, and apparently this isn't the first time it's been used for gender reveal-related numbskullery. According to the article, in April of 2017 some other clown used tannerite in a gender reveal stunt, and caused a giant fire that destroyed 72 square miles (186 square km) in Arizona. Masculinity in this culture is deeply screwed up.

That sounds completely insane. I, uh, why would you use explosives to celebrate something? What?

FelixSH said:
That sounds completely insane. I, uh, why would you use explosives to celebrate something? What?
Click to expand...

The culture of the United States is deeply, deeply sick.

What's particularly tragic is that the woman who originated the concept did it simply to celebrate that after having several misscariages, this time she had reached the point in her pregnancy when it was possible to determine the gender. And she deeply regrets the monster the whole thing became.

Staff member
All the world’s TVs cut to static, then a shadowy figure appears.

One new gender will be revealed each hour until our demands are met.

Somewhere in the world a skyscraper crumbles.

Falselogic said:
The culture of the United States is deeply, deeply sick.
Click to expand...

It’s not like the US invented fireworks as a celebratory thing. As to why gender reveals in particular bring out a very special blend of anarchistic destructive idiocy in people who clearly strongly value traditional societal norms, I have no clue.

I mean yeah, explosives can be fun and exciting! Just also, obviously, quite dangerous, so don't mess with them unless you know enough about what you're doing to avoid fucking your own or anyone else's shit up. (All of which is orthogonal to the fact that gender reveal parties are pretty dumb.)

a less anecdotal account of what happened this time

Destil said:
All the world’s TVs cut to static, then a shadowy figure appears.

One new gender will be revealed each hour until our demands are met.

Somewhere in the world a skyscraper crumbles. 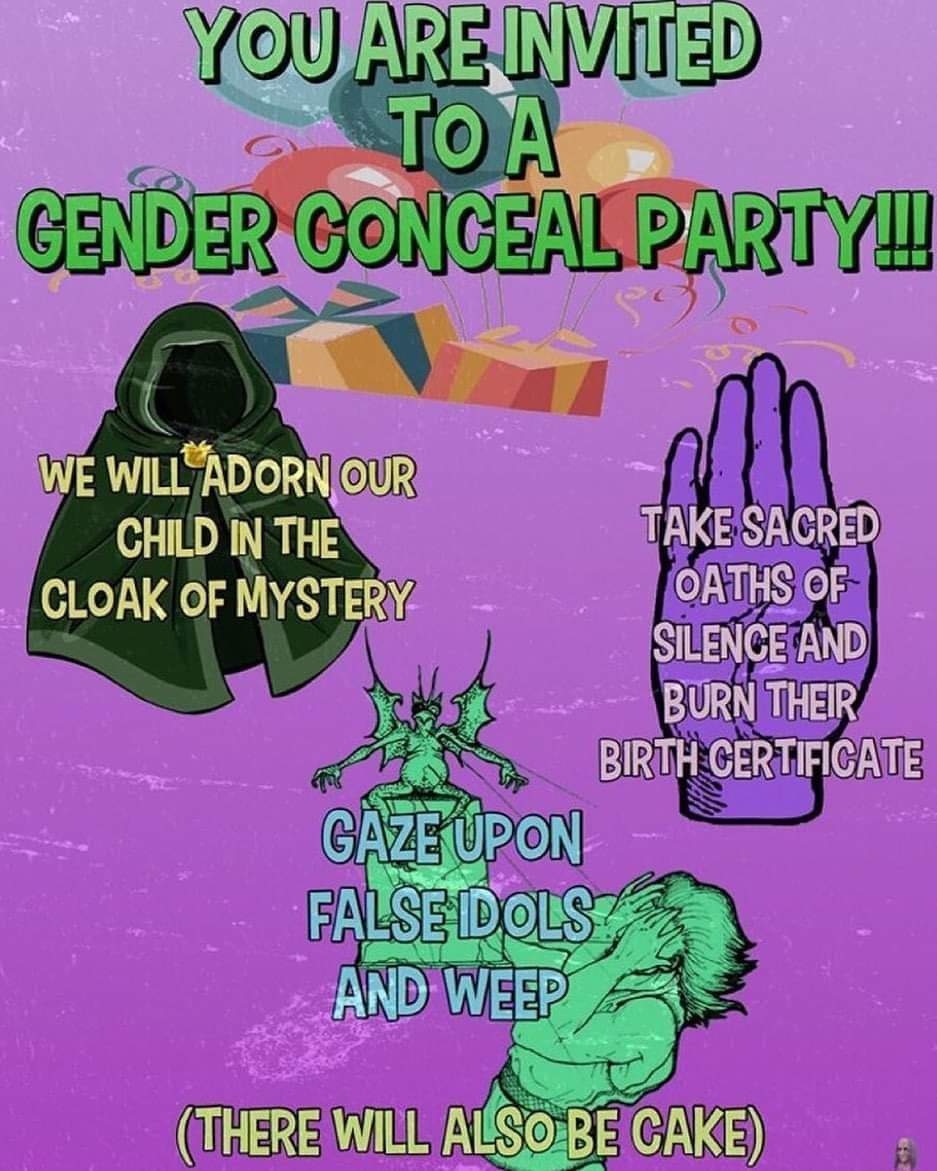 What kind of cake?

Becksworth said:
As to why gender reveals in particular bring out a very special blend of anarchistic destructive idiocy in people who clearly strongly value traditional societal norms, I have no clue.
Click to expand...

I mean, this is the same culture that invented the promposal, so

Here in Brazil, when i was growing up, during pregnancy people only had a party where they celebrated that a baby was coming and people brought presents (chá de bebê), which is influence from England, i think? And now people are doing gender reveals parties aaaaaaaaaaagh i don't now who brought this but i'm not happy with you `

I've railed against these a LOT on forums and have refused to attend them and kind of been a dick about it to the hosts so I no longer get invited! It's pretty great but oh man do I love stories about how these crashed and burned.

Telling the parents "why aren't you calling it a sex reveal party? I don't think you know your kid's gender yet" is a good way to never get invited again and I highly recommend it.

Yeah, the way these usually catastrophically fail involves someone dying or millions of dollars in property damage.

Mildly hot take: I don't think gender reveal parties are completely to blame for this. Vast swaths of America practically worship at the alter of dumb, stupid, dangerous shit. Consider - the generation that grew up on Jackass is now old enough to be having all kinds of babies. Americans also take literally any excuse possible, no matter how flimsy, in order to party and rage. St Patrick's Day? Cindo de Mayo? Are you kidding me? If it wasn't gender reveal parties, these same idiots would find some other excuse to light their communities on fire or maim their loved ones. My state has practically outlawed all fireworks because the sheer amount of damage they do every year during the 4th of July and New Years, and you still see countless people risking life and limb to make some sparkles in their backyards. Gender reveal parties only make the news because they're new enough and novel enough and when they go wrong rare enough that they feel newsworthy. If its yet another house burned down on the 4th of July, that story doesn't get circulated around the interwebs in the same way because that's a common enough stupid thing to not attract attention anymore.

Ok, now all of that said. Gender reveal parties are quite possibly the dumbest, most American thing to come out of our culture next to vaccination conspiracy theories and trickle down economics. I feel mildly blessed that I've never been invited to attend one, and that my inner circle of friends are all on the same page.

Admittedly I've only lived in the US for 10 years, but I can honestly say I had never heard news of random people blowing up hundreds of acres of forest, or killing neighbors, or collapsing quarries, until it somehow became imperative to make a really big deal of stating what gender stereotype you wanted to assign your newborn child.

When houses burn down on July 4th (to paraphrase, "Celebrate your country's independence by blowing up a small piece of it!") it doesn't make the news because that's a known factor (fireworks) combining with the Jackass factor you mention. People using other countries' holidays as an excuse to get drunk are also known to be that, excuses to get drunk. They've been there before. They'll continue to be there. But July 4th people don't create elaborate displays with industrial explosives, and Cinco de Mayo revelers don't plan around bursting open packages filled with red, white, and green vapors to show off their... well, not patriotism towards Mexico, but whatever it is they would show? That's behavior exclusive to gender reveal parties.

This is both a new level of dumb, and a new level of cis people panic/arrogance, and they both came from heightened toxicity in US culture, not the background radiation of "drunk people are jackasses".
Last edited: Apr 23, 2021

As long as parents are going to have parties celebrating the identities that they're going to be imposing on their children, we should just cut to the important stuff and have fandom reveal parties. Just imagine, you cut the cake and find inside a Funko from whatever franchise the parents care too much about.

"Our son is going to be a Hufflepuff!"

"Congratulations on your Jedi!"

"but mother, I wish to become a political science enthusiast."
"the cake showed Tracer from Overwatch, and that's final!"

Zef said:
Cinco de Mayo revelers don't plan around bursting open packages filled with red, white, and green vapors to show off their... well, not patriotism towards Mexico, but whatever it is they would show?
Click to expand...

I think what they're showing their is their "patriotism" towards tequila and the bastardized/Americanized versions of Mexican food.

So I was idly wondering, "why Tannerite" (and secondarily, "what the heck is Tannerite") so I looked it up and...


Wikipedia said:
Because it is sold as separate components which are not themselves explosive, it is not regulated by the US Bureau of Alcohol, Tobacco, Firearms, and Explosives (ATF),[4] and can be transported and sold in many places without the legal restrictions that apply to explosives
Click to expand...

At least with July 4 we know when it's coming and can prepare accordingly. Whereas gender can strike at any time

Kirin said:
So I was idly wondering, "why Tannerite" (and secondarily, "what the heck is Tannerite") so I looked it up and...

I didn't want to have something suspicious in my search history, so I looked up "gender reveal tannerite", and I got ads for gender reveal kits specifically produced by the Tannerite brand within the first three results.

And then a mix of results about the recent mishap, and other commercial results for both the product or for other gender reveal kits.

I mean the original one of these was a fucking cake. I guess people got tired of baby showers being 'for the women' and the men will only pay attention if there are city-levelling pyrotechnics.

I hate to use the term "fucking diseased" but 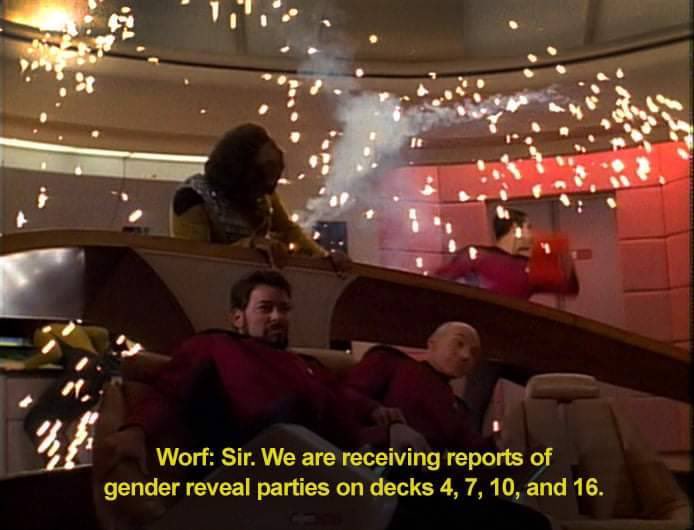 q 3 said:
Whereas gender can strike at any time
Click to expand...

Man, ain’t that the truth.