Johnny Unusual said:
Is this near the period where Joe Casey starts writing and it gets a bit of a Jack Kirby look?
Click to expand...

Yes! It's last treading water transitional creative teams issue before James Robinson has a short run, and that is followed by Casey. My understanding is that the Robinson and Casey written runs coming up are considered by many to be the best period in this volume of Cable and one of the better periods of any Cable solo series generally.

As with most Spider-Gwen stories, Gwenom vs. Carnage is ~okay~ 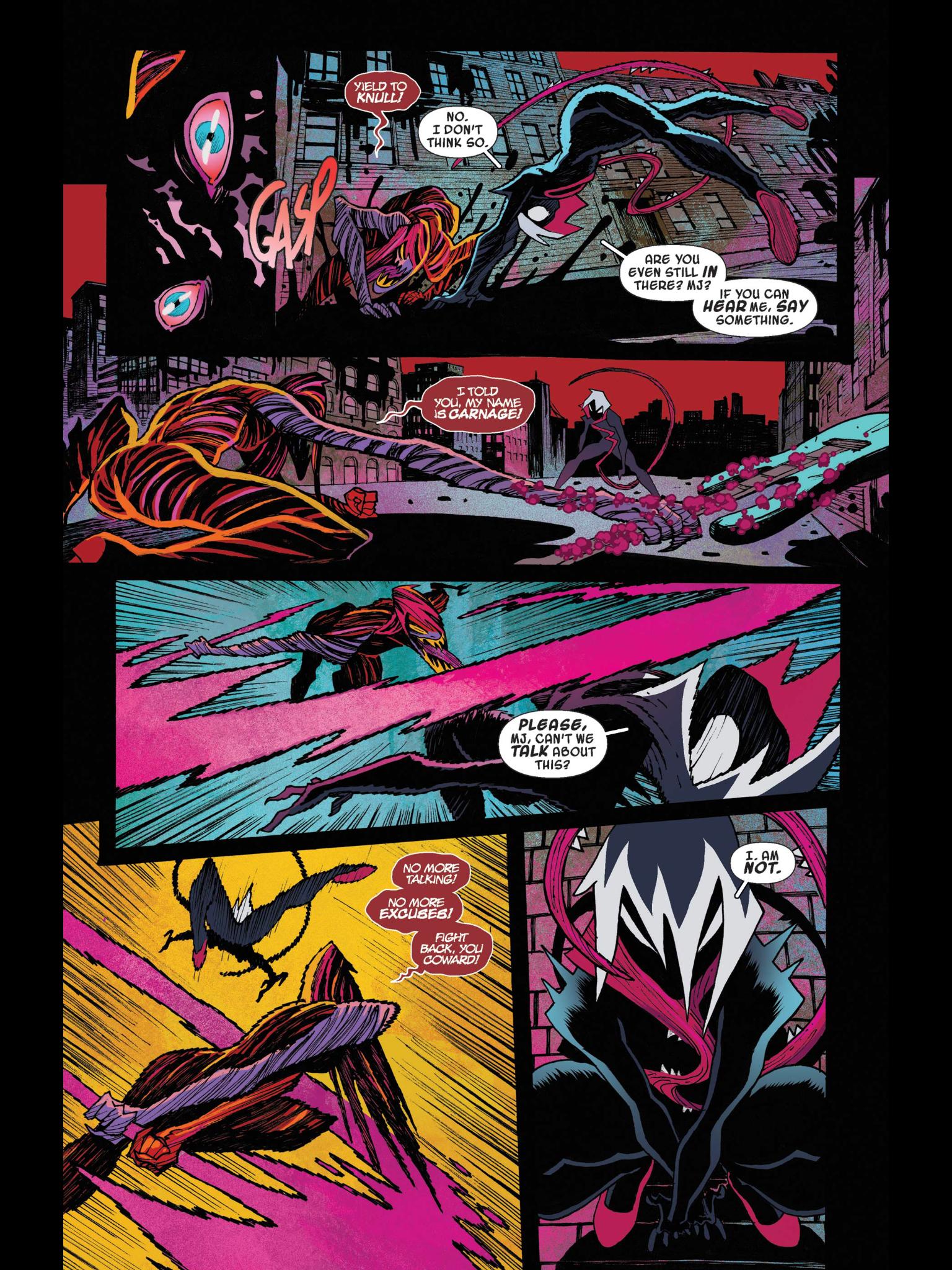 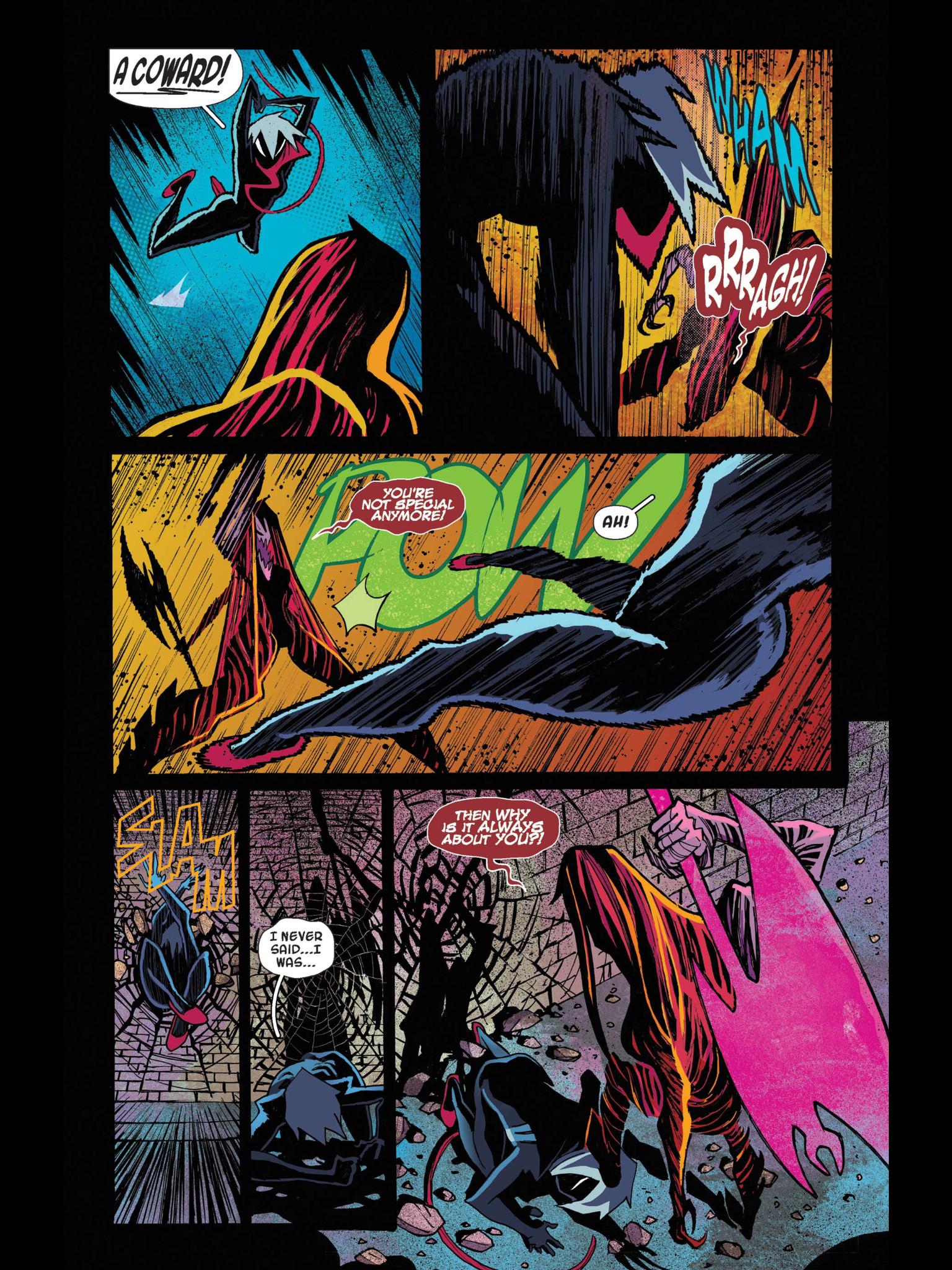 Why it took this long to get a full on Murder Cartoon Carnage, I'll never know

Beast (1997) is not the best or the worst mini-series from the post-Onslaught X-mini glut, but it's definitely the weirdest, even compared to Gambit vol. 2 which is basically "Preacher is popular, right? So what if we did something kind of like that, but with Gambit?"

Apparently a Beast mini-series is where they finally wrapped up the abandoned for over a decade loose end of what happened to Karma's abducted twin siblings, and it's... not what I expected. 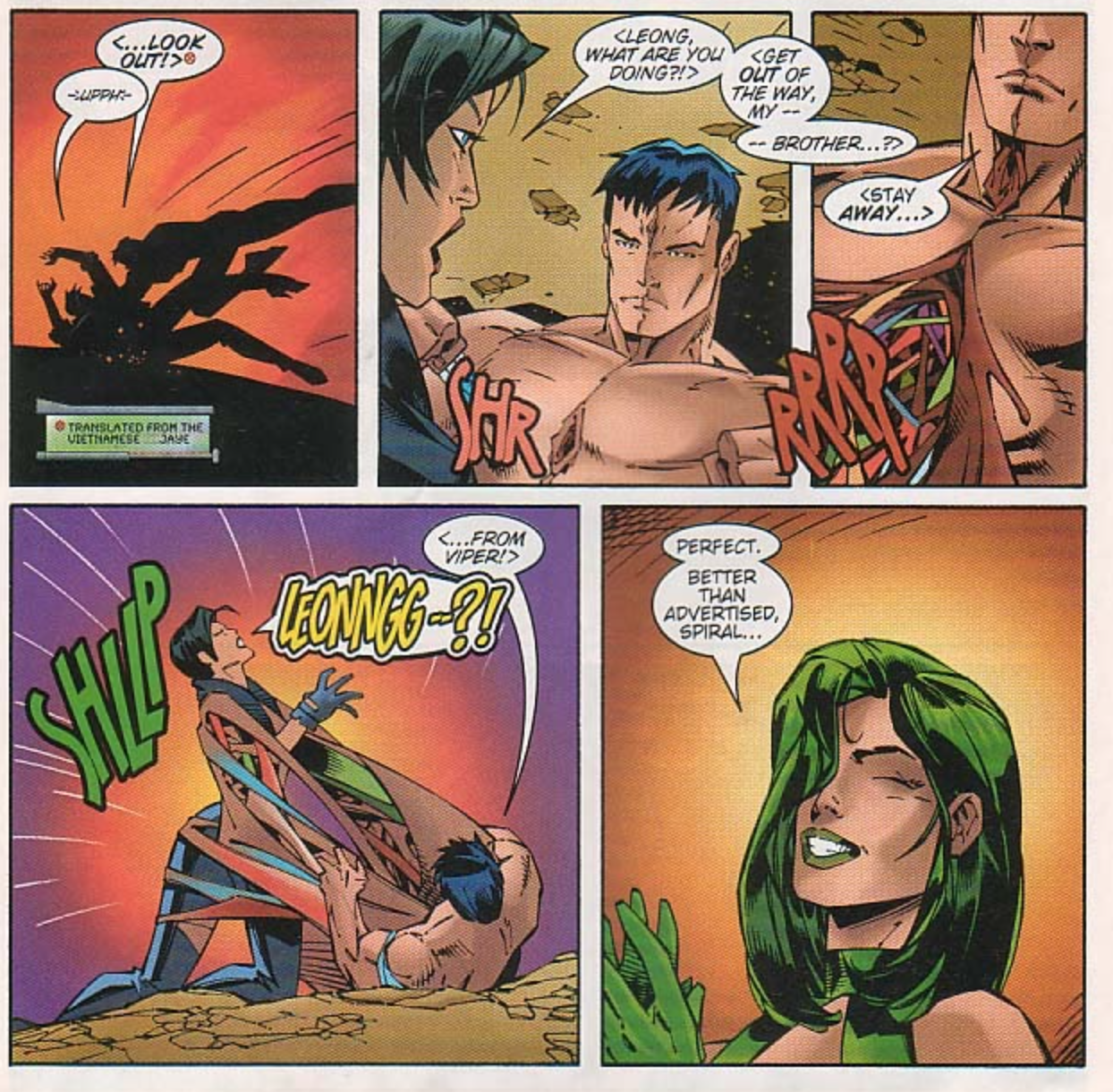 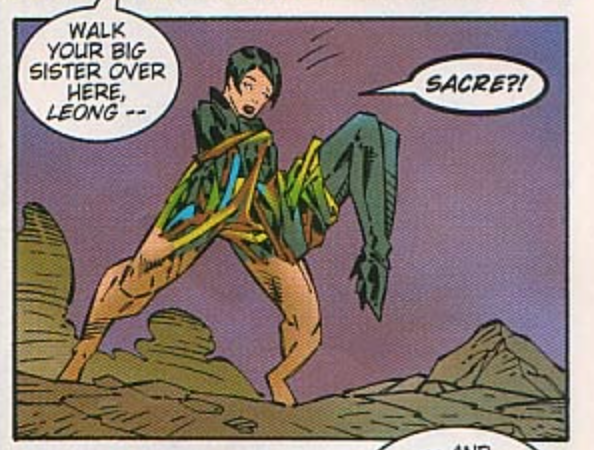 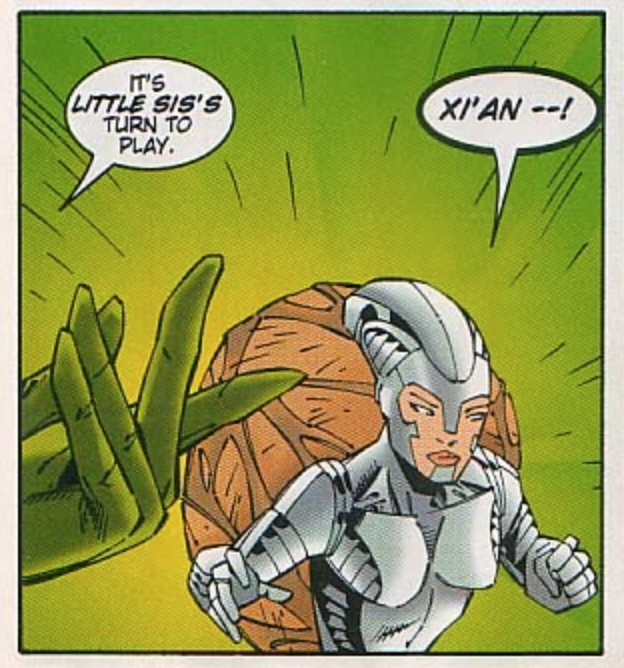 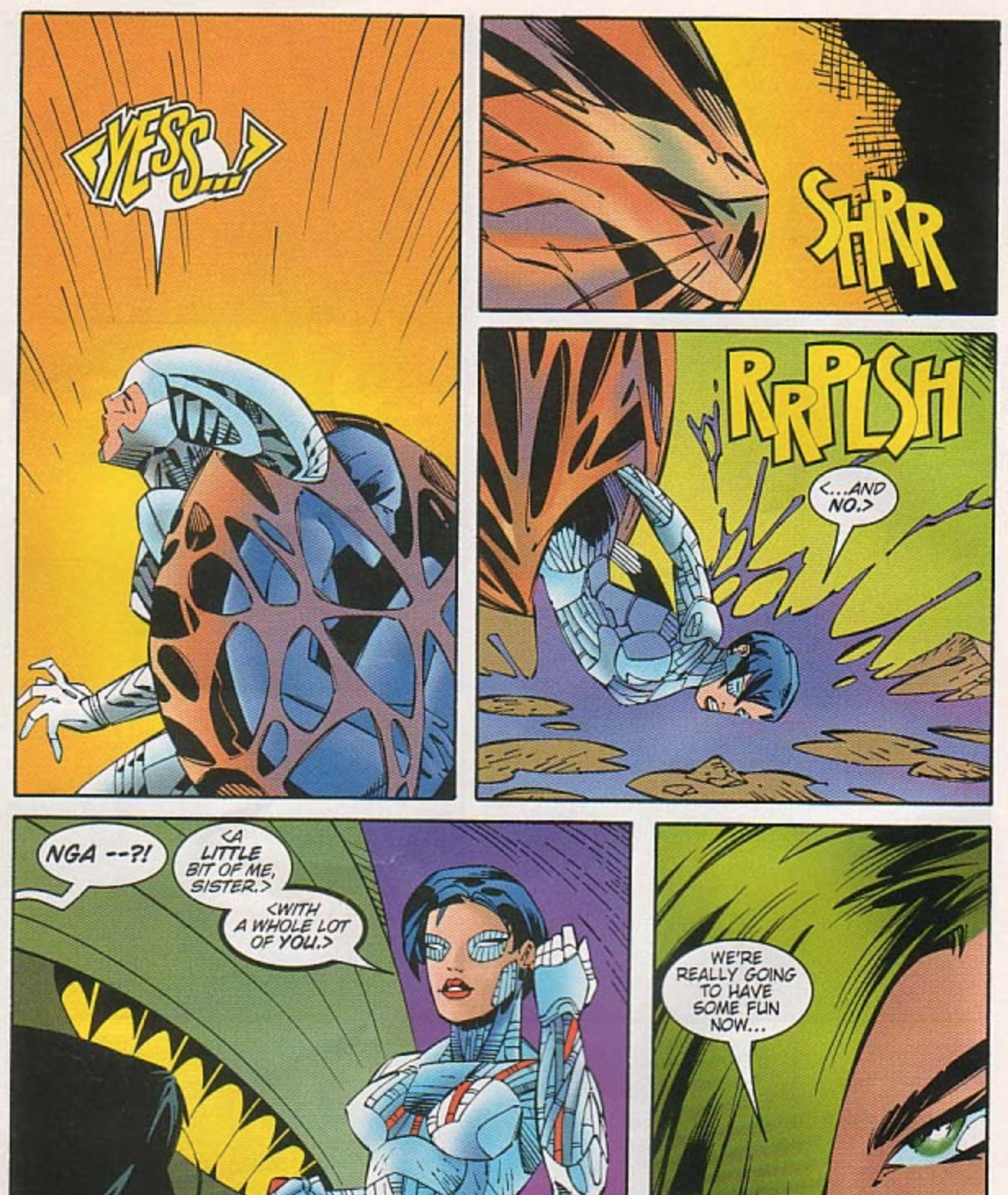 I'm pretty sure that everyone just agreed to ignore that Karma's siblings were aged up and given body horror powers, whenever someone even remembers that these characters even exist to begin with. Apparently, at least so far, no one thinks it even merits an offhanded mention on their Marvel wiki pages!

Oddly, there is also a New Mutants mini a few months later in 1997, but instead of handling this loose end there it was the focus of Beast's mini, for some reason.
Last edited: May 13, 2021

Octopus Prime said:
As with most Spider-Gwen stories, Gwenom vs. Carnage is ~okay~

I know it's already been mentioned in the thread, but as a Swedish speaker, "Yield to Knull!" is basically making me giggle like Beavis and/or Butthead right now.

Been reading Tomb of Dracula for the last few days. Thankfully, it didn’t take long for Marv Wolfman to realize that Dracula was a much more interesting character than the group of vampire hunters trying to kill him (except Blade, I guess) and the stories started focusing on him a lot more.

Its also got that X-Men situation where it really doesn’t feel like it’s part of the Marvel universe, even though there winds up being a lot of cross pollination connecting it. I'm also not sure if 1970s England had as many medieval villages as it does in these comics, but I've never been there, so maybe!

Blade also has an incredible outfit in his first appearance; 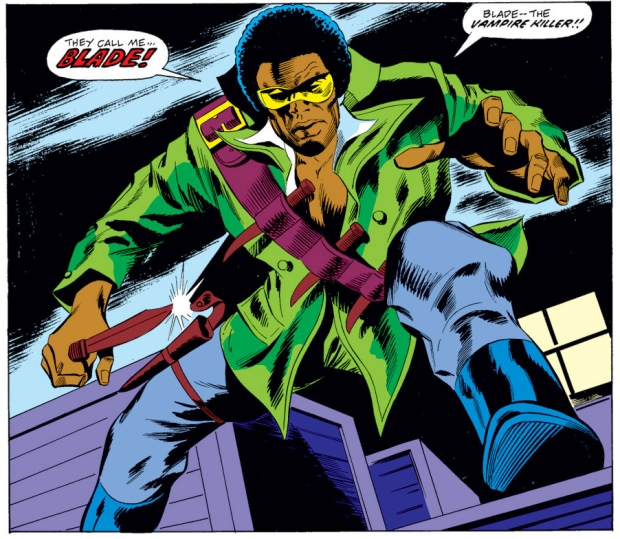 A really weird thing about the Joseph story in 90s X-Men is that everyone is constantly thinking, like, "Could our greatest enemy truly be reformed? How strange to fight alongside him!" But Wolverine, Storm, and Rogue were all members of the X-Men with Magneto in the late 80s, when he was the headmaster of the school, even. I understand that it was harder to get back issues back then and you can't expect every writer to keep track of years of continuity, but it really feels like most everything between the Dark Phoenix Saga TPB and X-Men #1 (1991) was memory holed during this period.

It's especially odd because there are significant connections to the Mutant Massacre in both Marrow and Gambit's stories in this era, and that was a period when Magneto was on the team. So you have these invocations of a traumatic event everyone remembers when Magneto was on the team, but then you'll have characters be like, "I can't believe Magneto is now, for the first time, part of the X-Men, who could have thought!" either from someone who this isn't actually new to because they were there or from some dumb-dumb from the original five who was tricked into pretending to be a mutant hunter while Magneto was holding the X-Men together.

To a lesser extent you also weirdly get this with Wolverine, where so many characters' relationships to Wolverine seem to be modeled after Cyclops and Wolverine's relationship on the 90s cartoon. But, even moreso than Magneto, Wolverine has been so much more of a core part of the X-Men than say Iceman or Archangel. If anything, at this point in time, everyone from the Original Five but maybe Cyclops should essentially be in the role of outsiders, and Wolverine, Storm, and maybe Rogue are the closet thing to core, stable members of the team who held things together while the going was tough.

estragon said:
I understand that it was harder to get back issues back then and you can't expect every writer to keep track of years of continuity
Click to expand...

I thought that's what the editors were there for.

There is the most late 90s X-Books panel and editorial note:

"Months after this story is over, be sure to come back for a one-shot that explains how Sabretooth got those pills! Run, don't walk to buy Sabretooth: Origins: How He Got the Pills He Mentioned in that One Panel."

It's funnier because this is the second late 90s X-Men story where Sabretooth escaped captivity by building up a pain tolerance, and also the second one-shot linked to Sabretooth escaping captivity by building up a pain tolerance. The first time he did not need pills, and the one shot was just the conclusion of the story and actually a pretty good issue. This time... there's a flash back one-shot to answer a question no one would have even asked if this single panel had slightly different dialogue and didn't show him holding a pill to advertise the upcoming one-shot.


LBD_Nytetrayn said:
I thought that's what the editors were there for.
Click to expand...

I don't know what editors thought they were there for during the late 90s X-line, but it was definitely not keeping track of continuity.

These pills help the pain slide down real nice.

estragon said:
Now that the Disney owns mutants, fans are crying out for a shot-for-panel adaptation of Jack Kirby's Captain American Annual #4, the perfect way to introduce Magneto into the MCU.
Click to expand...

Unbelievably, Mister One returns in this week’s (non-canon, alt-universe) Magneto & the Mutant Force #1.

I finished Mark Waid and Javier Rodiriguez's History of the Marvel Universe. It makes the general history digestable and even has a huge annotations backlog and a "sorry we missed em" list of major characters who didn't get a mention. But MAN that art is good. Even the page that covers the clone saga looks far more gorgeous than it deserves. 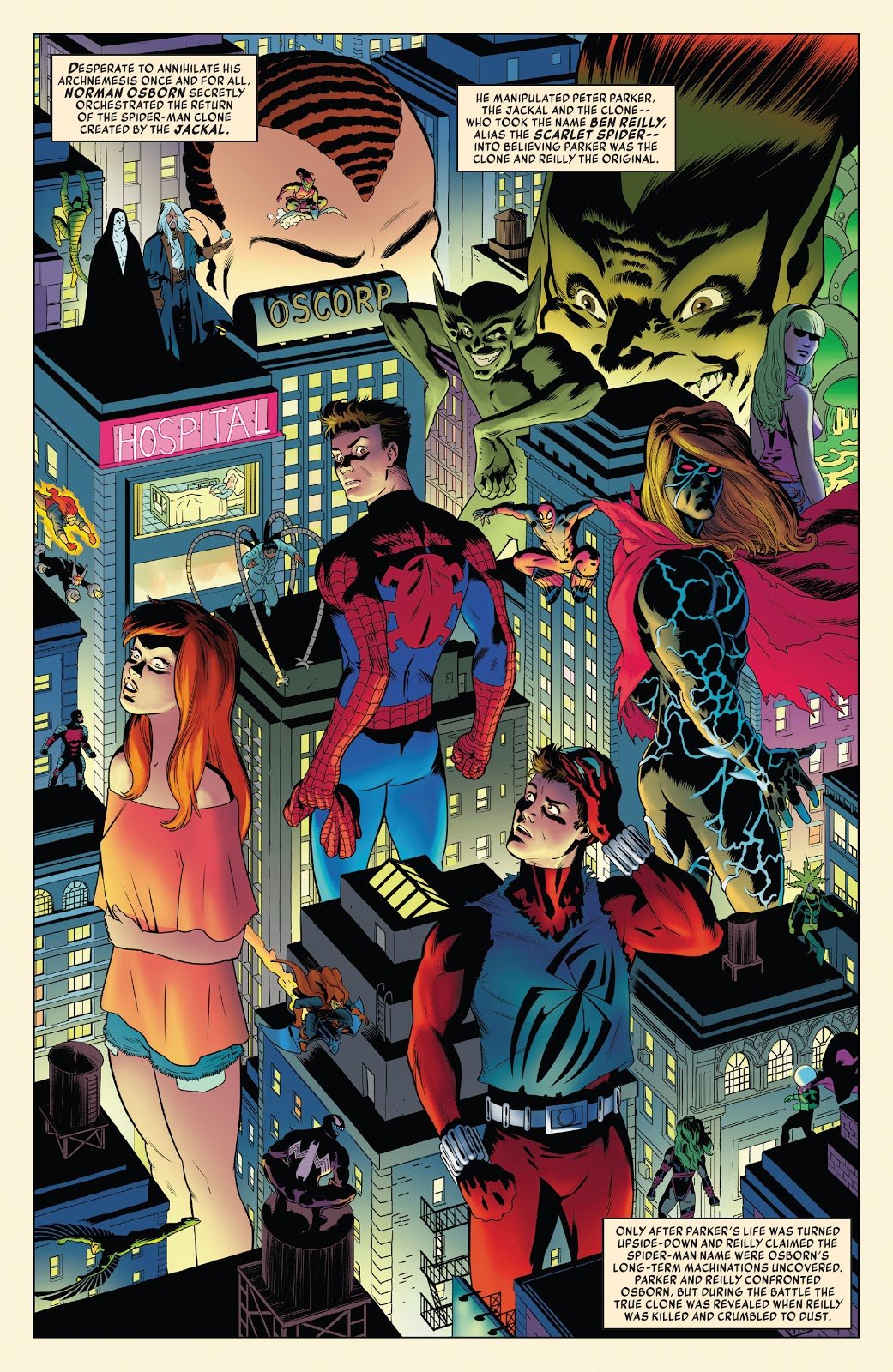 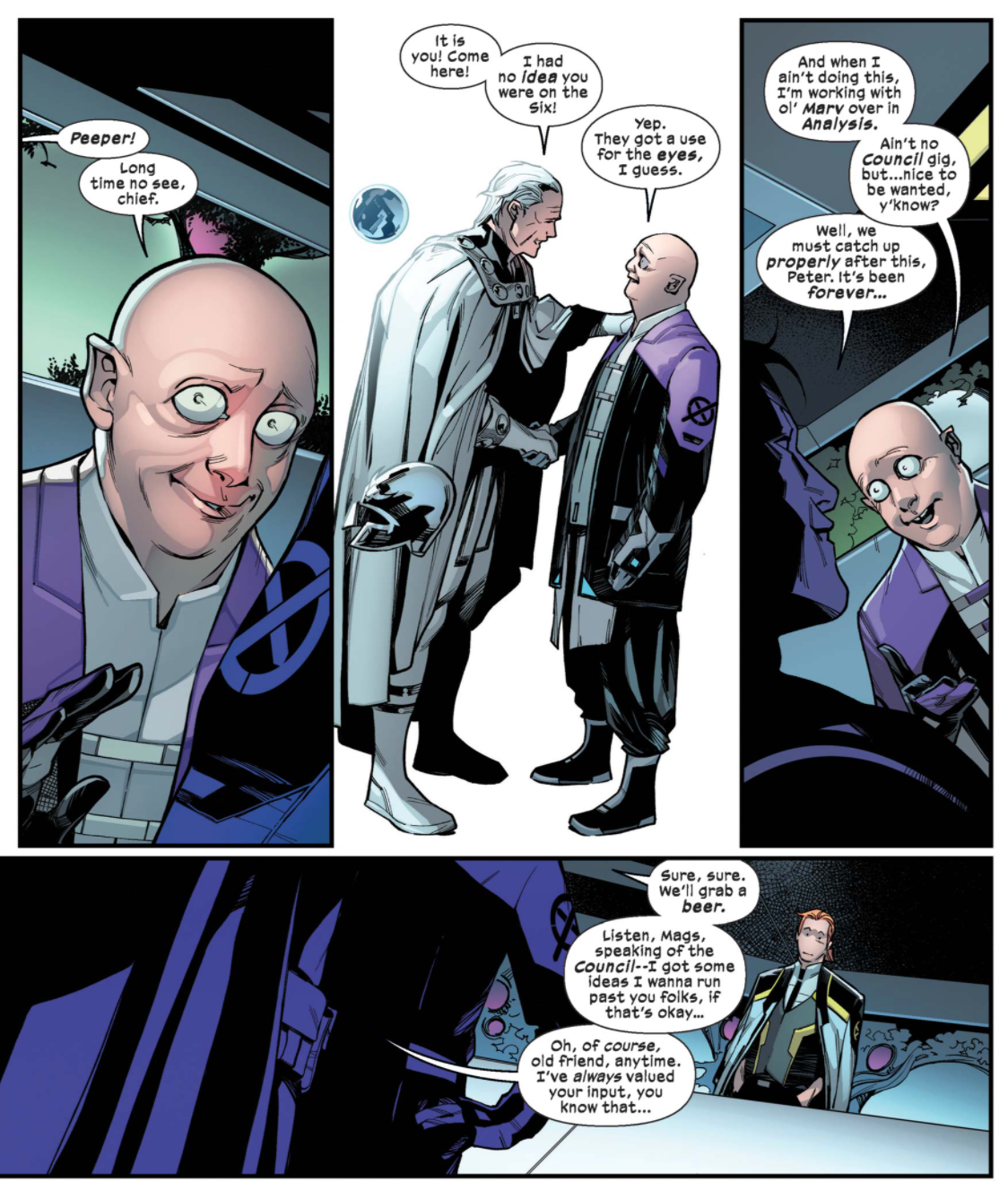 Because one of the tie-ins I really liked in King in Black was a sequel to it, I started reading the 2019 Black Cat series. This is a RIDICULOUSLY fun comic that feels like it was tailor made for me

It's Oceans 11, except with only three people, Felicia hangs out with Dr. Stranges ghost-dog Bats (easily my favorite Dr. Strange supporting character), and gets into bonkers Super Hero-y heist stories.

There's a back-up story where her mentor scams Dracula.

One of Felicias hench-men has an argument with aforesaid talking ghost dog when he insists he doesn't believe in magic.

So I've just been picking and choosing X-Men related stories from the start of the Krakoa era, and most of my knowledge of the series between that and the Claremont era is pretty sketchy.

Anyway Why are there two Psylockes now?

Well they really kept a white woman in an Asian body for FAR too long so they had to reattach that body to an actual Asian person, but Betsy stayed around because she is a famous character. (I don't think I read these stories; I'm just assuming) They probably both still have purple hair because that is a great deal of both characters' appeal.

Unless there are two Betsy Braddocks, in addition to Revanche. Haven't read this stuff in years.

In a forgettable Hunt for Wolverine tie-in mini-series called Mystery in Madripoor, Psylocke had to (was able to) recreate her body from scratch and so Betsy reverted to her original body. This also caused Kwannon to come back for no stated in-story reason. (The real reason is of course that people like the Jim Lee costume.)

So, honestly, there really is not a narrative reason. Which is kind of funny because like a year later it could have been one of the countless narrative driven resurrections. That being said, Kwannon coming back for no narrative reason is honestly kind of the perfect ending for this overcomplicated story that was supposed to be short term but ending up lasting for like 30 years because people were so horned up for that Jim Lee redesign.

It's a good design

I know I'm in the minority but I prefer Jim Lee's Lady Mandarin resdesign better than the popular wedgie ninja costume: 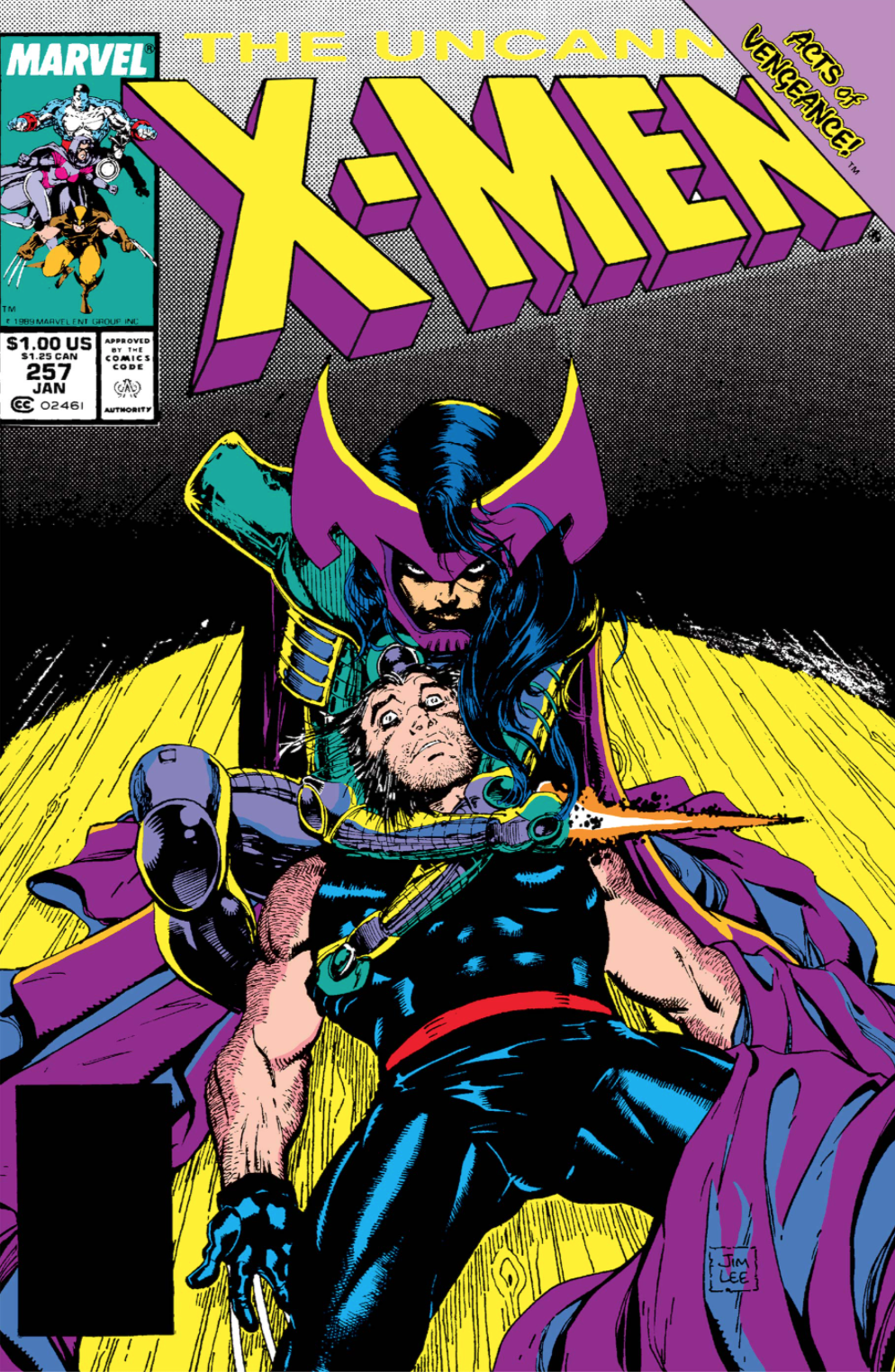 I like its continuity with her previous armored costume (in the box up-left), and I think it visually emphasized her role as a kind of grey character that Claremont was leaning into in that era.

I’ve always liked the fact that Psylockes big innovation as a telepath was to punch people in the brain with a psychic fist.

The focused totality of her psychic powers, as the caption box would say.

Naturally; you don’t want to half-ass it when punching someone’s brain with a psychic knife

IF I HAD ANY ARTISTIC TALENT I would make a comic featuring Charles Xavier seeing Psylocke use the focused totality of her psychic powers to create a pink knife-sword, and Xavier just reacting with, "dammit! Why didn't I think of that move? Now I can't do something like that, everybody is going to think I'm copying her. Oh well, guess I'll just keep thinking swirlies at people. Now to teach boring ol' Jean, who never uses her powers for anything interesting..." And then he swears as Marvel Girl manifests a fiery, bird aura.

Technically he did eventually copy the "what if telepathy but instead you can hit a guy very hard, for some reason" trick, although he copied it from X-Man and it was kind of awkward all around for everybody: 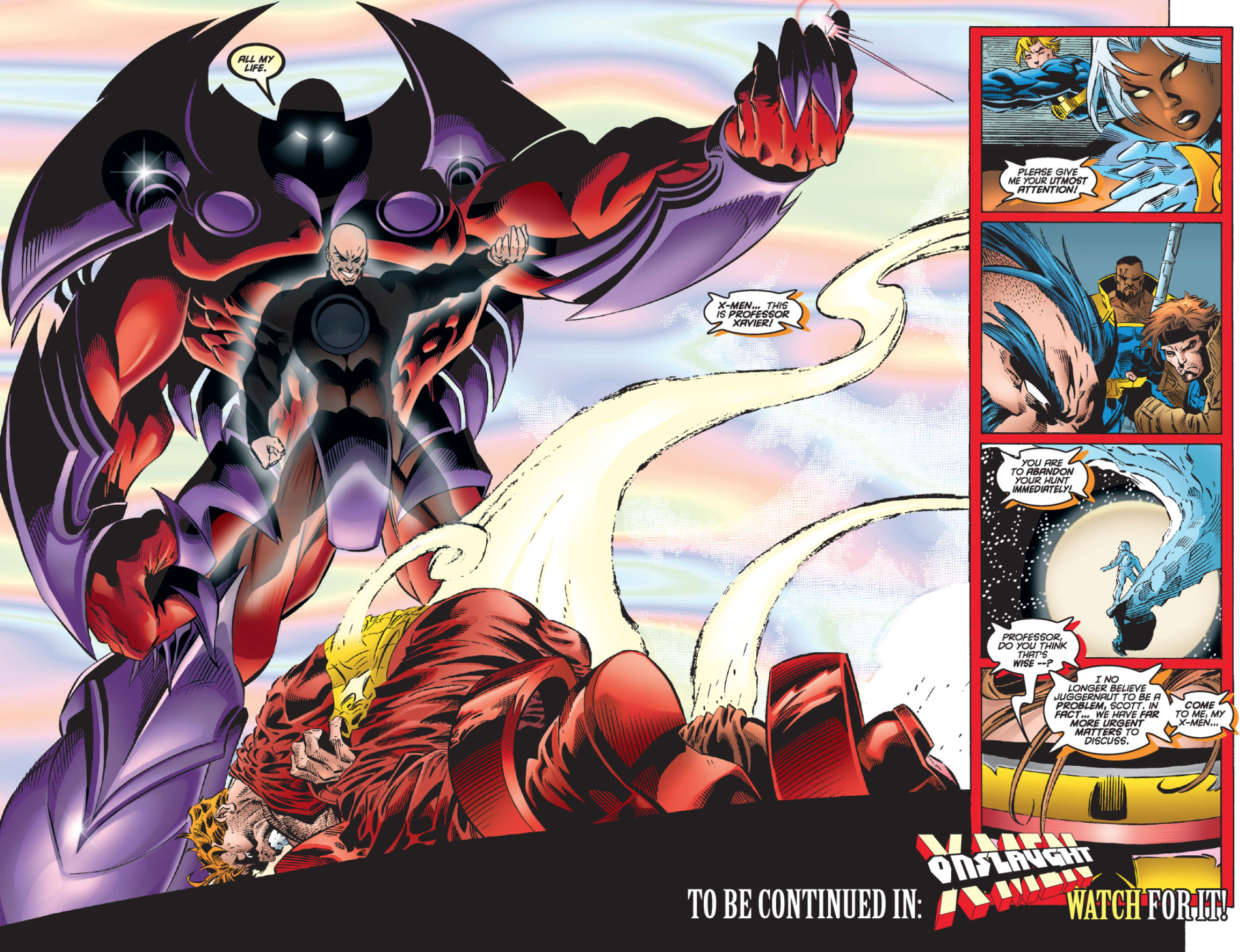 I thought Chuck used telepathy while Psylocke used telekinesis. No?

Psylockes got both, but she usually just uses it for a psionic knife to make her punch’s cause brain damage.

Hellion/Julian Keller. I will try to think of more… (this doesn’t matter) Characters do tend fo develop both over time…