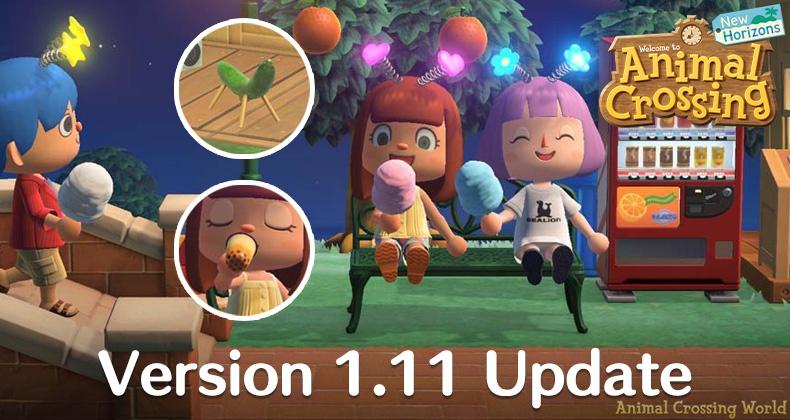 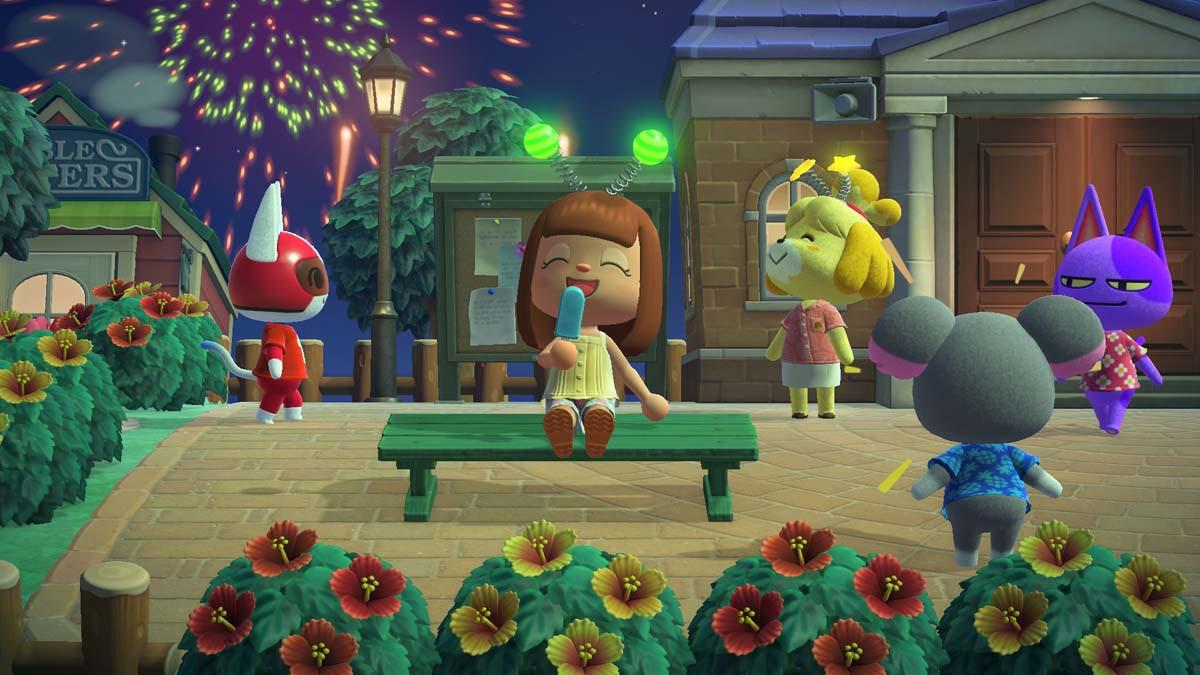 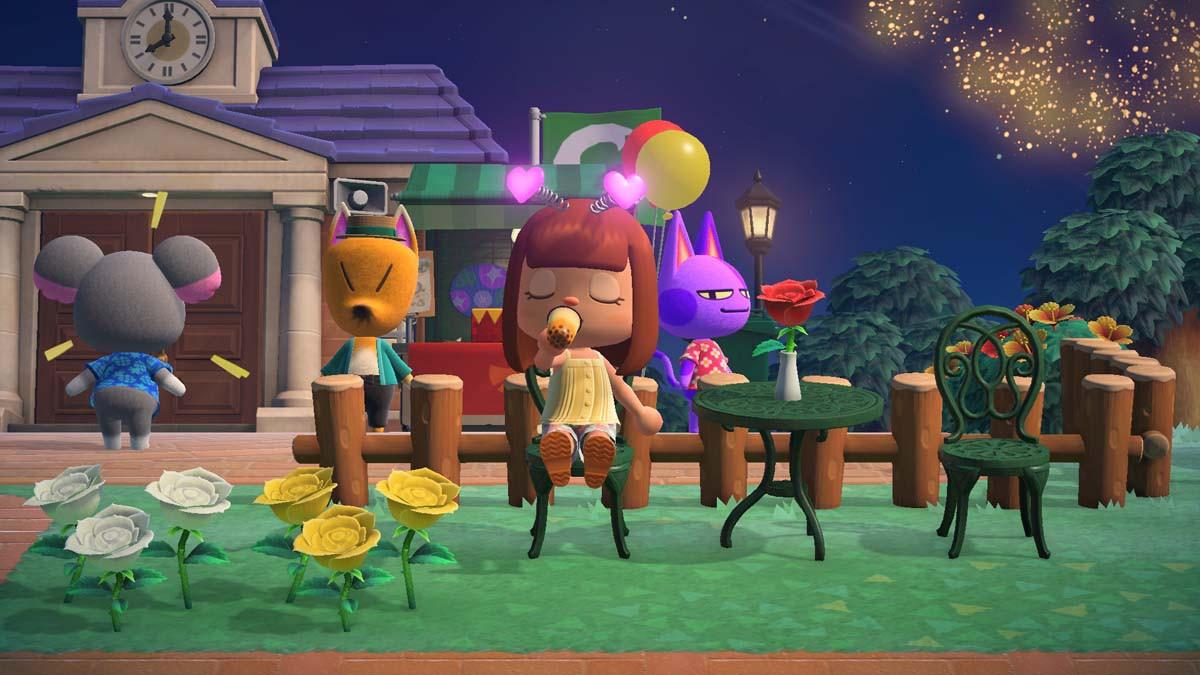 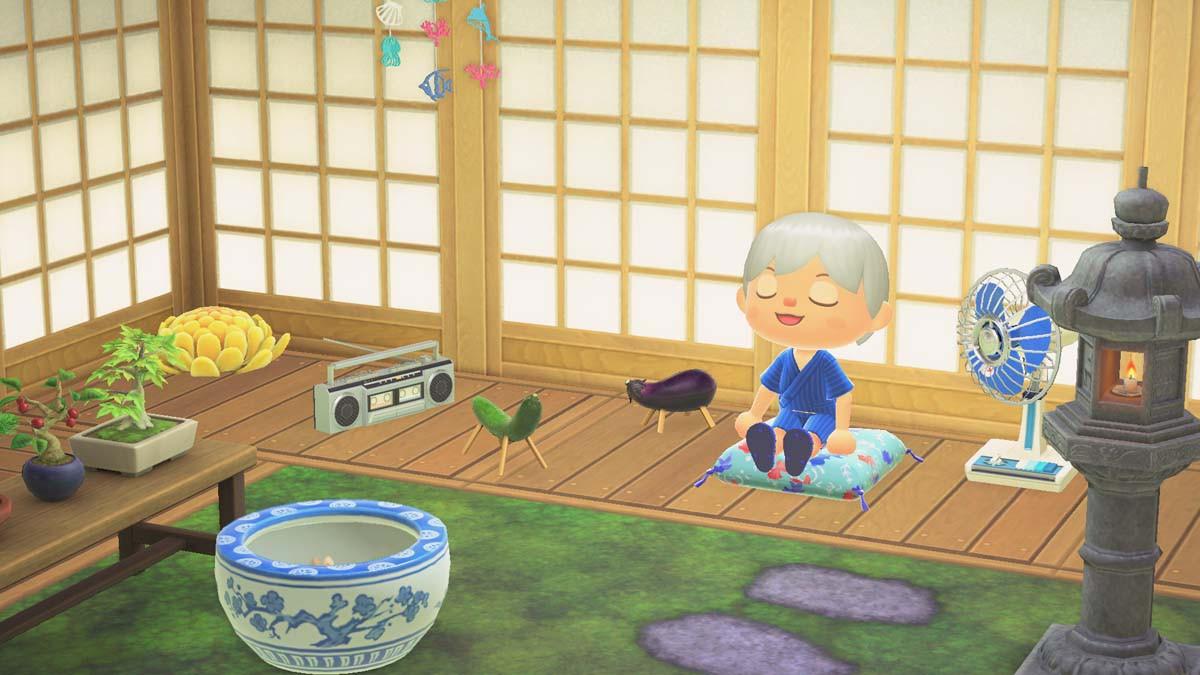 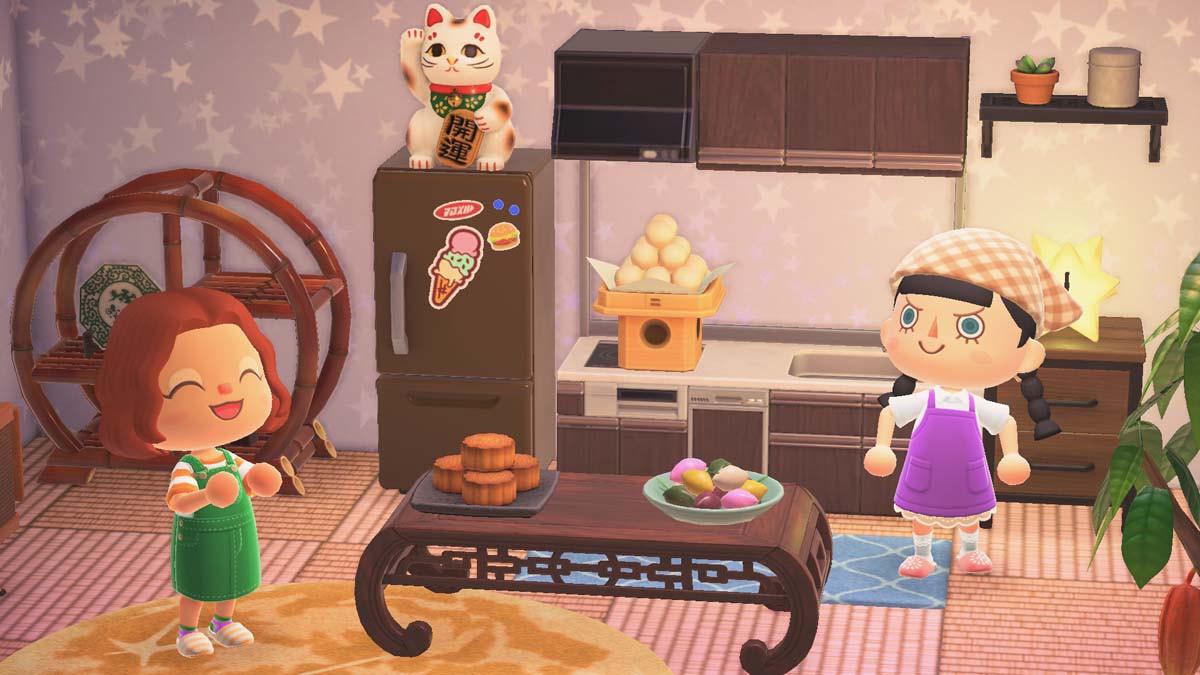 Nintendo saying there were more updates in the works and thanking people for being patient did not exactly inspire confidence in what the first update in three months would have. No doubt we'll know what all there is once the datamine happens, but we're probably waiting 'til at least October for another big update like the Mario and Sanrios.

Definitely like that more food and holdables have been added, though. Not that the holdables will do me much good at Harv's unless a hold item equipping option happens but hey, it'll still be nice to finally hold a cup of tea.

I cannot figure out what is happening in the second circle inset in the first picture. A gigantic cigarette? Eating a mushroom and the stem is sticking out of her mouth? Seriously what is that?

Violentvixen said:
I cannot figure out what is happening in the second circle inset in the first picture. A gigantic cigarette? Eating a mushroom and the stem is sticking out of her mouth? Seriously what is that?
Click to expand...

I think that's the cup of bubble tea. It looks like a drinking pose.

MetManMas said:
I think that's the cup of bubble tea. It looks like a drinking pose.
Click to expand...

Aaaaah I see it now. Thank you. That was sincerely bothering me.

So the latest update broke the Photopia catalog a bit.

https://twitter.com/i/web/status/1420583344723488769
This has also effected all of the stuffed bears, the outdoor benches and tables, the nuptial ring pillows and doorplates, mugs...various random things. I think something got screwed up in the code.

I hope this gets fixed soon...

Whoever was hard at work fixing this glitch: "Thank you!"

Took over six months but I finally got her!

Two of my friends just got Switches and this is their first AC game. It's been delightful to get random questions like "how do I get more than one iron from rocks?!" "wait, there are different fruit trees?!" and feel like I know things.

That being said I'm really interested to see when all the stuff that was added as DLC appears for them because I have no idea! One of them is still in a tent and the other just got a house so I would guess they're a long way off from when Redd might show up but I'm curious when diving and such will be available.

Probably more as the game opens up sufficiently, I would guess?

In other words, I don't think they'll have to wait as long as we did.

Target has quietly restocked the amiibo cards. You can get series 1-4 online. The Sanrio cards seem to be in-store only, but they had a bunch at my store. Might be worth checking?

Yeah, now that they're a reasonable price again I might see if I can get a few packs of cards when I have the opportunity. Generally I've just picked up individual cards of characters I want online, but some (official) cards cost a lot more than others.

Blind packs are always a gamble, but being able to use Whitney in shoots again or getting Ankha insurance or potentially rolling a Lucky or Marshal would be nice. And unless I got a really bad roll I would almost certainly get friends both new and old for photo ops in the process.

Shame they still haven't reprinted the Welcome Amiibo cards, though. And the new eight, event characters, and the late additions to New Leaf (i.e. Harvey, Wisp) still remain Amiiboless. Got this whole awesome photo mode and nigh 1 & 1/2 years later I still can't have C.J. and Flick in it or use Wilbur (also Harvey) outside of Wedding Season or get Gulliver: Special Pirate Edition in a room.

MetManMas said:
I know it was just a tease with no real info yet, but I'm glad that Animal Crossing: New Horizons is finally getting Brewster so that people will shut up about wanting Brewster 'cuz of that one thing that was datamined ages ago.

But more than that I'm interested in what the game will do with him. New coffee stuff would be the obvious thing but The Roost could also bring back Gyroids (DATAMINE+Brewster's history with collecting them/having his own) and potentially be used as a spot for cameos for characters who otherwise wouldn't appear in the game.
Click to expand...

About time they're doing something with this. The only reason I'm still playing is so I can get another Lucky Cat or two.

The eight new folks: Raymond, Audie, Dom, Sherb, Judy, Megan, Reneigh, and Cid all don't have Amiibo yet so it's finally time.

The 50 Welcome Amiibo folks: Series 1-4 and the Sanrios have seen reprints but Welcome Amiibo still continues to be a holdout. I could very well see them all being part of Series 5 to boost its card count.

New islanders/service characters?: The first four series each had 100 cards and I doubt Series 5 will put in another Isabelle With A New Outfit to boost the count. Maybe the series will be filled out with some more old villagers returning from previous titles? Or even some brand new villagers? Katie's mom? Space Gulliver? Serena? Farley? Lots of possibilities.
Last edited: Sep 24, 2021

Wait, do service characters from amiibo actually do what they're known for, or act as villagers, or what?

LBD_Nytetrayn said:
Wait, do service characters from amiibo actually do what they're known for, or act as villagers, or what?
Click to expand...

If service characters have a (physical) presence in New Horizons their Amiibo can be used to summon them for photo ops in Photopia.

Welcome Amiibo's new Amiibo additions were exclusively villagers though, and after HHD and AF finished receiving support, so Harvey and Wisp (who debuted/returned in the Welcome Amiibo update respectively) didn't get cards. And like the new villagers, the new service characters don't have Amiibo in Photopia yet.
Last edited: Sep 25, 2021

Ah. Sounds like maybe there's not a whole lot going for me there, then...

I hope they have a sell your island to Nook feature after the update. I want to start over but I have 5 mil in bells I don’t want to lose. Also, bring back the club.

I finally bothered to read the various Nintendo emails I've gotten recently and I kind of want the 2022 page a day calendar and these shoes.

Only about half an hour away!

That all looks neat, farming will be fun, the new photo mode, etc. I don't know if -

Wow. That is awesome.

No interest in the DLC stuff for me but all the free stuff is amazeballs.

I am probably more excited for group stretching than I should be.

As a huge fan of interior decorating I am extremely interested in the DLC stuff. I'ma get Canberra and Freya to share a place.

Here's a better look at the Series 5 cards we know about so far. First is the initial new 8 and service characters who didn't have Amiibo... 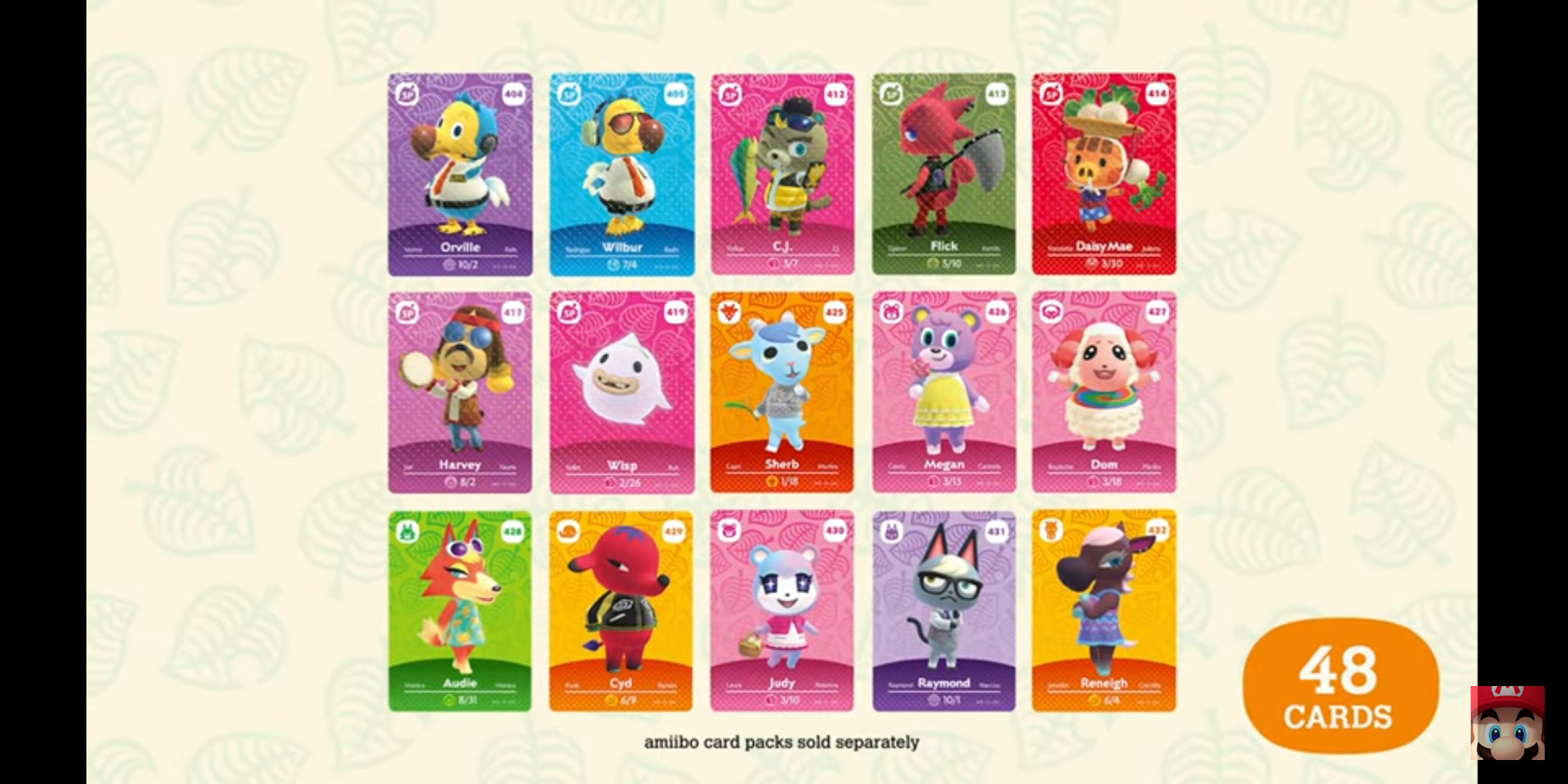 And here's the new additions. Lot of new characters but also some old ones who haven't been seen since Gamecube. 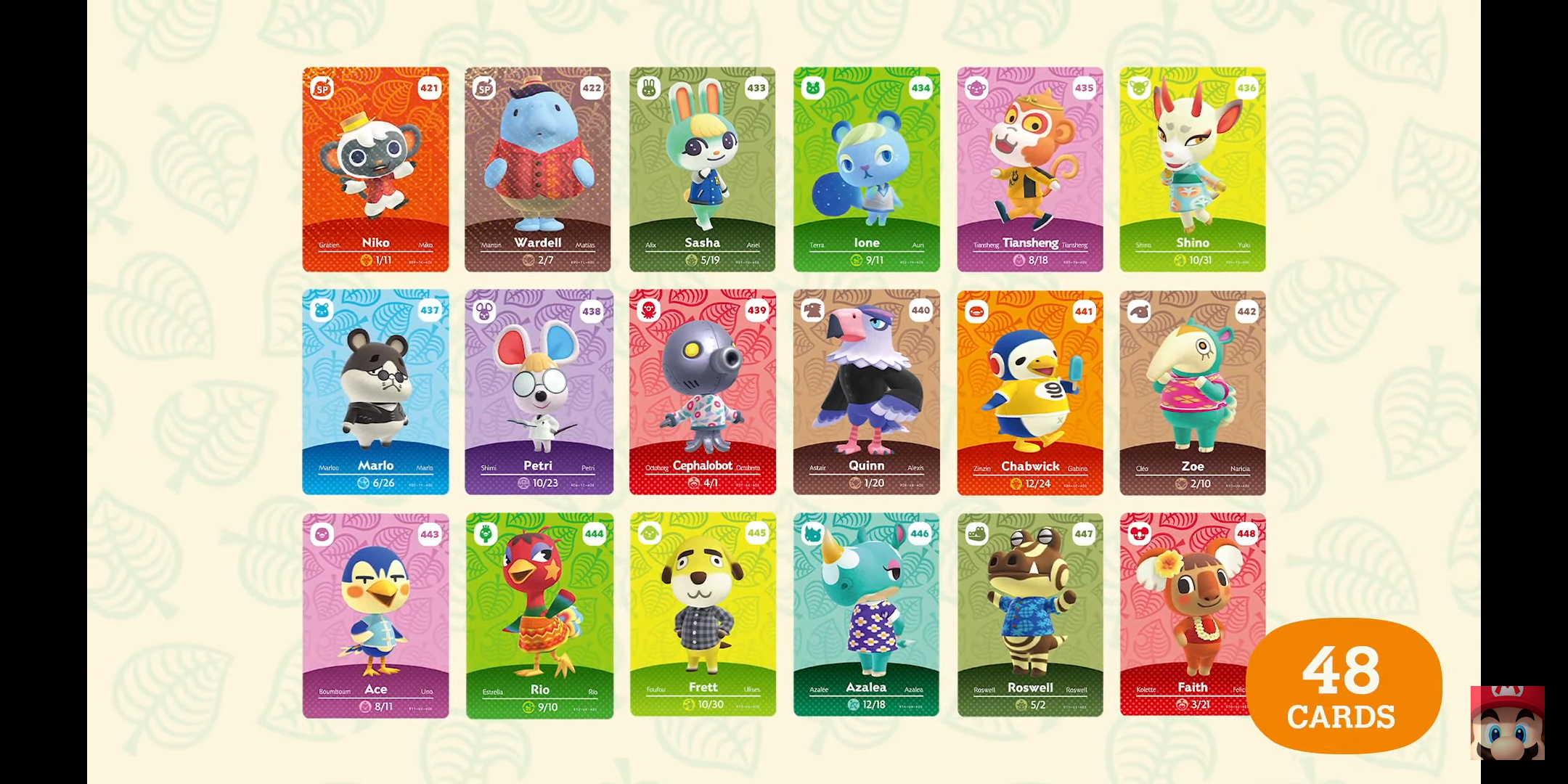 Still 15 unknown cards, too. Probably more different versions of existing event characters, but who knows? Maybe some old event characters who don't have cards will get 'em.
Last edited: Today at 4:43 PM

Very excited about this!

How expensive will that Raymond card get

WisteriaHysteria said:
How expensive will that Raymond card get
Click to expand...

Not as much as Shino's is going to be, judging by Twitter

I'll wait for the knock off cards on ebay.